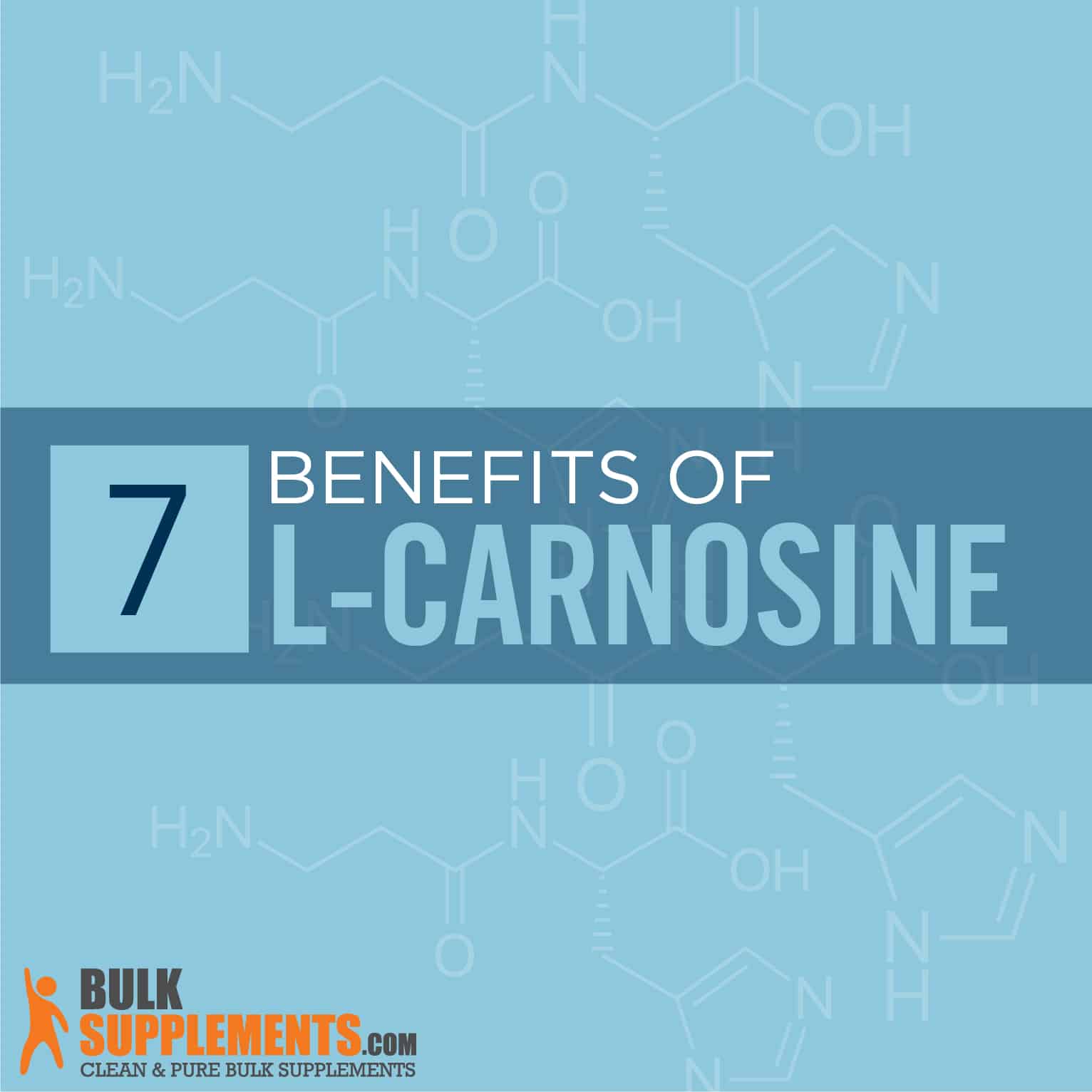 L-carnosine is a dipeptide the body produces naturally from combining the amino acids alanine and histidine (x). It acts primarily as an antioxidant, and its largest concentration exists in the heart, muscles and brain. Its supplement form fights free-radical damage in cells, advanced glycation end products (harmful compounds the body makes when fat and protein combine with sugar in the blood) and the formation of abnormal proteins in the body.

As we age, cells undergo oxidative stress from free radicals and reactive oxygen species (ROS) (x). It’s well known that antioxidants neutralize these cell-damaging species, and this makes L-carnosine, an antioxidant, a popular supplement to fight signs of aging (x).

Studies have found that L-carnosine may help treat patients with depressive disorders. An article published in Aging and Disease states that carnosine “suppress[es] stress in animals, and improve[s] behavior, cognition and well-being in human subjects” (x).

Those with amino acid abnormalities may face serious health complications. Carnosine abnormalities are a real thing, and medical researchers have actually linked them to carnosinemia (x). The abnormal metabolism of carnosine causes carnosinemia, and patients usually have too much carnosine in their urine and too little carnosinase (the enzyme that breaks carnosine down) in their blood (x). It causes intellectual deficits, seizures and congenital myopathy (a muscle disorder).

Over the years, clinical research has had a keen eye on carnosine’s antioxidant effects. In fact, one such study, published in Rejuvenation Research, asserts that these effects are responsible for brain stimulation, muscle microcirculation and cellular rejuvenation (x). The same study states that carnosine’s antioxidant effects help prevent “neurodegeneration and the accumulation of senile features.” The study concludes with a statement supporting carnosine’s ability to assist patients under oxidative stress with high efficacy and no side effects.

Medical researchers have sufficiently documented carnosine’s neuroprotective properties in the fight against cerebral ischemia (blood-supply deficiency in the brain). Without an adequate supply of blood, the brain loses oxygen, and when the brain loses oxygen, brain tissue starts to die and the risk of stroke increases (x). One study, published in the journal Stroke, found that carnosine decreased neuron damage and reactive oxygen species in the brains of mice with cerebral ischemia (x). At the same time, the study found that it also preserved levels of glutathione (GHS) — a potent antioxidant — in the brain.

Other studies suggest that carnosine helps your nerves function efficiently by managing synapse impulse transmissions (x). Some have suggested it also helps treat and prevent neurological disorders such as Parkinson’s disease and Alzheimer’s disease.

L-Carnosine as an Alzheimer’s Preventive

An article published in the Journal of Alzheimer’s Disease states that carnosine can clear up many of the damaging compounds that contribute to brain degeneration and Alzheimer’s, such as (x):

A study published in the journal Amino Acids found that carnosine may have hypoglycemic, hypotensive and lipolytic effects (x). That is, it may help the body lower blood sugar and blood pressure as well as break down fat. Moreover, this study found that carnosine can help you control your appetite. Researchers suspected it did all this by affecting the nerves in the adrenal glands, stomach, pancreas, kidneys, liver and adipose tissues.

L-Carnosine as a Cancer Preventive

A study published in the journal Amino Acids found that carnosine helped heal wounds in diabetic mice (x). Patients with diabetes experience complications in wound healing because their disease regulates cellular events that take place during the healing process. During their wound analysis after treating diabetic mice with carnosine, researchers found that the dipeptide “increased expression of growth factors and cytokines genes involved in wound healing.” In other words, applying carnosine to wounds in diabetic mice accelerated their healing.

In another study, published in the journal Gut, researchers found that a supplement of zinc and carnosine, zinc carnosine, suppressed gastric and small-intestinal injury in mice by stimulating gut mucosal integrity (x).

L-carnosine exists in natural abundance in red meats and chicken (x).
However, other meats are also rich in carnosine, including beef rump, shrimp, turkey breast, lamb rump, mackerel, tuna and rainbow trout (x). Carnosine doesn’t exist naturally in vegetables, but the amino acids that make it do. You can consume alanine in mushrooms, turnip greens and seeds and histidine in tofu, soybeans and nuts (x).

Unless you suffer from a carnosine deficiency, you don’t need to worry about getting enough of it, even if you’re vegetarian or vegan. Your body should make enough of it on its own.

Some doctors may use carnosine to treat individuals with autism. However, in these individuals, one reported side effect is overstimulation (x). This may lead to irritability, hyperactivity or insomnia. Reduce dosage to alleviate this side effect.

Because carnosine can lower blood pressure, individuals with already low blood pressure should exercise extra caution when taking it (x).

Carnosine supplements are available as powders and capsules. Choose the supplement that works best for you, and remember to talk to your doctor before adding it to your diet. Knowing when to take carnosine depends on what you want to take it for. Of course, make sure to follow directions on the packaging for optimal results.

Recommended daily doses are as follows:

Its supplement form is available in powders and capsules. Start with a small dose and increase it gradually. Follow dose guidelines on the packaging, and always talk to your doctor before taking it to make sure it’s right for you.