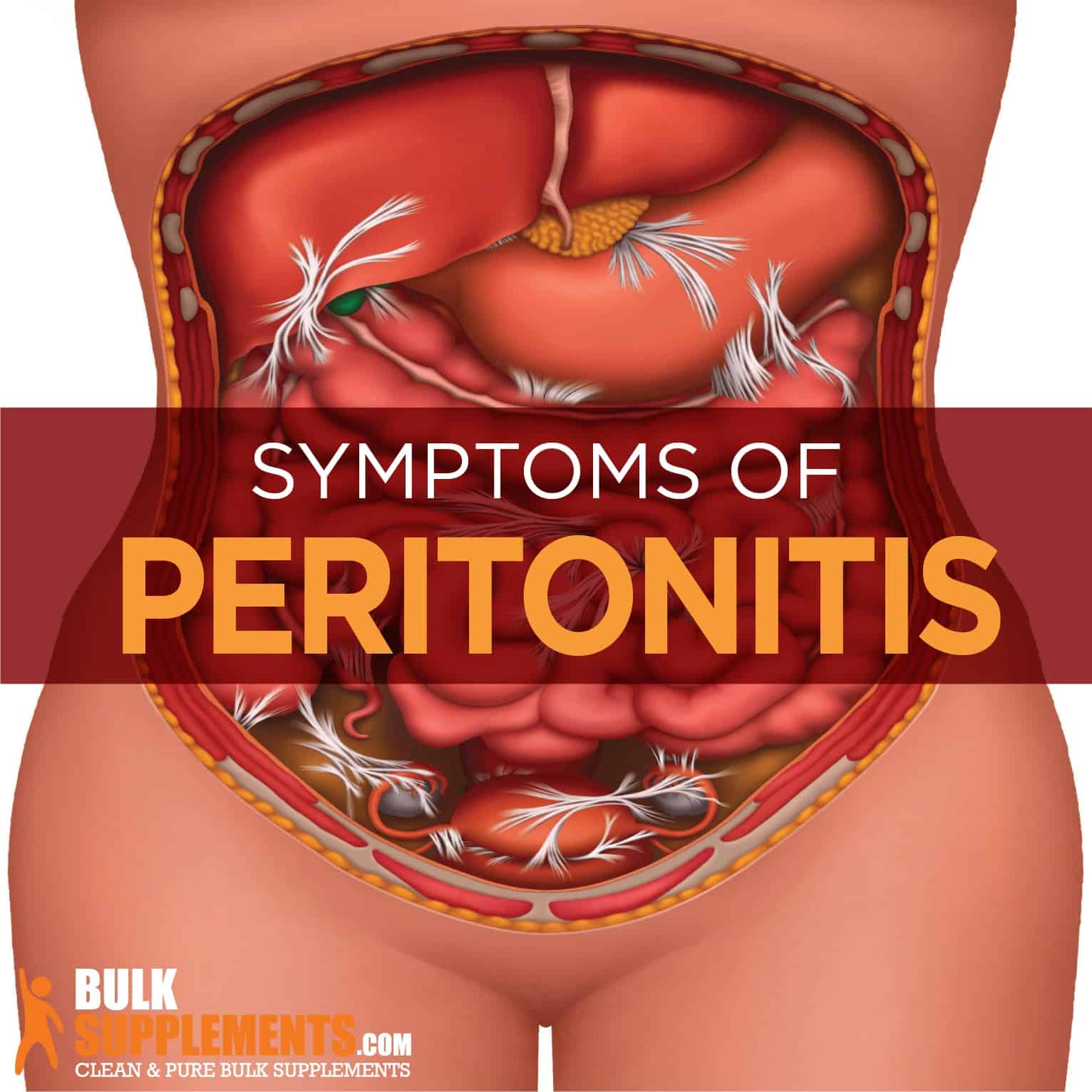 Peritonitis refers to an inflammation of the peritoneum. The peritoneum is the tissue that lines the abdominal inner wall. It is responsible for serving as a covering or a form of support to most of the other organs in the abdomen as well.

Usually, peritonitis is caused by a fungal or bacterial infection. Peritonitis can be dangerous and can spread rapidly if it is left untreated. It either spreads into the blood, which is referred to as sepsis, or spreads to other organs and infects them. Eventually, failure of multiple organs could result and subsequently be fatal. This is why it is very important to look out for the tell-tale signs of peritonitis, which mainly consists of abdominal pain (x).

The symptoms of peritonitis are fairly common symptoms that could indicate a range of other issues. These symptoms are highly basic in nature and could be easily dismissed as a normal occurrence until they progressively get worse.

This is why you need to look out for these symptoms, especially when you are experiencing them recurrently or for no definite reason. This calls for a visit to your physician, as early detection implies easier and faster treatment. Some of the symptoms of peritonitis include the following:

Abdominal pain, otherwise known as stomach pain, refers to pain or an ache that occurs within the abdominal cavity, which is the space that is bounded by the chest at the top and the pelvis at the bottom. Abdominal pain is usually pretty mild. However, there are cases where the pain could be unbearable. Such cases are often caused by allergies, ingestion of expired or contaminated food, muscle strain or even indigestion. Abdominal pain as a symptom of peritonitis could be severe, especially since it is a result of inflammation of inner organs (x).

Bloating can be described as feeling like there is an inflated balloon in the abdomen. This can result in an increase in the size of the stomach, in addition to pain and tenderness. It is sometimes linked with a number of other gas-related issues such as aerophagia (swallowing air), belching or burping, flatulence or passage of intestinal gas (x).

Loss of appetite refers to a genuine disinterest in food, a reluctance to eat or an aversion to food normally enjoyed. Chronic loss of appetite can result in a gradual or drastic weight loss (x).

Diarrhea refers to bowel movements which result in loose or watery stools. This is a relatively common symptom of a wide range of illnesses and can even occur due to a simple imbalance of fiber in the digestive tract. If this lasts for more than two days, seek medical advice. Additionally, you should be careful to monitor your water intake and hydration levels, as dehydration caused by diarrhea can be serious (x).

Though opposite in effect, constipation and a difficulty to pass gas is also a potential symptom of peritonitis.

Nausea is a feeling of stomach discomfort accompanied by a strong urge to vomit. This need to vomit can be brief or linger. This can be a result of many underlying and acute problems such as food poisoning or a hangover. However, it is also possible for chronic nausea to be caused by ongoing problems (x).

You may experience fever or chills, as peritonitis is an infection. The body raises its temperature in order to fight off infection, which can manifest in a fever.

However, both types of peritonitis are life-threatening and neither should be taken lightly. Statistics show that the mortality rate of secondary peritonitis may be as high as 10 percent.

Rupture Within the Abdominal Wall

Most cases of peritonitis are a result of a rupture in the abdominal wall. This rupture then permits the causative agents to make their way to the peritoneum which then subsequently becomes inflamed.

Pancreatitis refers to inflammation of the pancreas and can cause a rupture. The pancreas, which is a long, flat gland, can be found in the upper abdomen tucked just behind the stomach. The pancreas serves to produce enzymes and hormones that aid digestion.

Diverticulitis refers to an infection or inflammation of certain small pouches known as diverticula that typically emerge along the intestinal walls. When these pouches form, it is still considered to be somewhat benign and is termed diverticulosis.

However, diverticulitis results when an abscess forms in either single or multiple pouches, severe infection or bowel perforation.

Peritonitis results when any of the pouches burst and the contents of the pouch then spill intestinal waste into the abdominal cavity (x).

Medical procedures such as peritoneal dialysis make use of catheters or tubes to eliminate waste products within the body when kidneys can no longer function effectively. During the process of this removal, an infection can result due to an unsanitary environment, contaminated equipment or lack of proper hygiene standards. This infection could then lead to an inflammation of the peritoneum. Also, gastrointestinal surgery complications could lead to infection of the peritoneum. It may also result from paracentesis, which is the process of removal of abdominal fluid (x).

Some other causes of peritonitis may include abdominal ascites. Abdominal ascites refers to a build-up of fluid within the abdomen, which is highly irregular. The symptoms usually consist of increased weight, an increased abdominal size and difficulty breathing. Peritonitis is one of the complications that may result due to the fact that the retained fluid provides a breeding ground for the growth of bacteria (x).

Dandelion is famous for its effectiveness in boosting production of urine, as well as serving as a laxative to increase bowel movement. It is also an effective digestive tonic and is useful in treating certain infections (x).

The recommended dosage for dandelion root is 1,000 mg twice a day or as guided by your doctor.

Increasing the amount of magnesium intake may be somewhat effective in reducing inflammation. Magnesium deficiency occurs when there is an inflammatory disease. Therefore, taking magnesium BHB powder would reduce inflammation (x).

Peritonitis is a very dangerous condition with a relatively high mortality rate. It is caused by a range of underlying diseases which in turn cause a rupture in the abdominal wall. If you are exhibiting any of the symptoms such as abdominal pain, fever, digestive interruptions or bloating, you should seek medical attention. Similarly, the addition of certain supplements to the diet can significantly benefit patients. Consult with your doctor to see if supplementation may help your current situation.