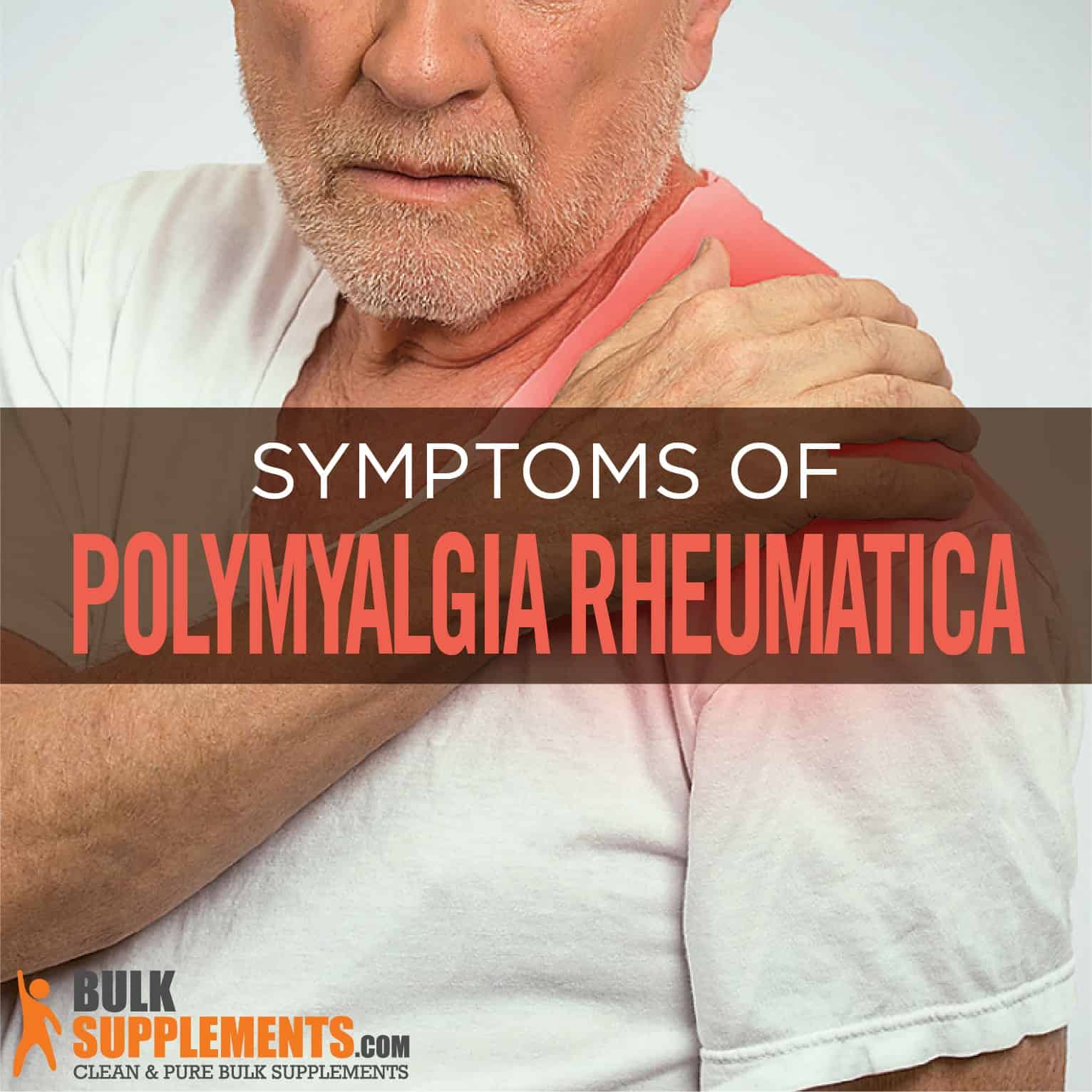 What is Polymyalgia Rheumatica?

Polymyalgia rheumatica (PMR) is the most common inflammatory rheumatic disease that effects the elderly. While any older adult can get PMR, it is most common in Caucasians over the age of 50. It typically impacts women more often than men (x). This inflammatory disorder can cause muscle pain and stiffness, typically around the shoulders and hips (x). In about 15 percent of people with the disease, PMR may develop into a potentially dangerous condition called giant cell arteritis (or temporal arteritis) (x). What is giant cell arteritis and how does it relate to PMR? The relationship between PMR and GCA, among others, will be discussed in greater detail shortly.

Symptoms of PMR tend to come on very quickly over the course of a few days to weeks, or, in some cases, overnight. However, for some people, symptoms may come on slowly. It varies from person to person. These symptoms that occur are due to inflammation in the body’s joints and the surrounding tissue. That inflammation is what causes the person to experience muscle pain and stiffness (x). Symptoms of PMR affect both sides of the body equally and are usually most severe in the morning or after long periods of rest or inactivity (x). For example, symptoms will most likely worsen during long car rides or if you are sitting at your office desk for too long.

Most people who have PMR will experience muscle stiffness and pain — the two most common symptoms of PMR. This occurs in at least two of the following areas; hips, shoulders, neck, thigh, buttocks and upper arms. However, some people experience pain and/or stiffness in their hands or wrists as well (x). The first area to be affected by symptoms of polymyalgia rheumatica, though, tends to be the shoulder girdle. The shoulder girdle is three bones (your clavicle, scapula and humerus) and three joints (sternoclavicular, acromioclavicular and glenohumeral) (x). It is less common to experience symptoms in your lower arms, lower legs and feet (x).

Most of the time PMR remains a benign condition that easily responds to treatment. However, in rare cases, permanent muscle weakness, atrophy (the degeneration and loss of muscle mass) and disability may occur (x). Also, due to the severity of stiffness for some with PMR, it is not uncommon for the patient to experience limited use of the body parts where the symptoms are being felt.

It can cause a disruption of sleep, make it hard to get dressed in the morning or make it difficult to rise from a seated position, such as getting off of a couch or out of a car (x). It may even lead to the loss of the ability to raise your arms over your shoulders.

Other symptoms sometimes include back pain, fever, fatigue and the general feeling of being ill (x). These symptoms are not unlike those that come along with the flu.

Right now, there are no known causes for polymyalgia rheumatica. No medications have shown side effects linked to the cause of PMR (x). The idea of it being the possible offshoot of an infection has been discussed due to how abruptly the symptoms usually present themselves. However, it is unclear if infections really are the primary cause (x). In another attempt to search for a possible cause, blood tests for muscle enzymes and muscle biopsies have been done, but all have normal results in relation to PMR (x).

While the exact cause of polymyalgia rheumatica remains unknown, it is speculated that genetics and environmental exposure may have an effect on its onset.

There are some specific genes and gene variations that may increase a person’s chances of developing polymyalgia rheumatica. For example, it is possible that someone may inherit a genetic predisposition to PMR. Genetic predisposition means that a person may carry a gene for a specific disease. However, the gene may not express itself unless it is triggered by something in the environment (x). The HLA-DR4 gene has been associated with a number of polymyalgia rheumatica cases, so it is possible that this inherited gene may have a connection with PMR. However, there is not yet enough evidence or information for us to fully understand the exact nature of the relationship between the two (x).

An example of an environmental trigger that may play a role in the onset of PMR is a virus. However, at this time, there have been no specific types of viruses that show to be a cause of PMR. Additionally, new cases of PMR commonly occur in cycles. This indicates that it possibly develops on a seasonal basis (x).

Other Causes and Risk Factors

Other known risk factors associated with polymyalgia rheumatica include age, sex and race. PMR almost exclusively affects adults. The average age of onset is 70 years old and it is very rare for anyone under the age of 50 to develop PMR (x). This disorder is especially common in women and in Caucasians with ancestors from Scandinavia or Europe (x).

There are a number of other disorders and illnesses (like infection, malignancy, metabolic bone disease and early onset rheumatoid arthritis) that have symptoms that very closely mimic the symptoms of PMR (x). Some of these disorders include:

This is a chronic inflammatory disease also known as temporal arteritis. It involves panarteritis, which is the progressive inflammation of arteries in your body. About 30 percent of people who have PMR are also diagnosed with giant cell arteritis (x). Symptoms of GCA vary from person to person. However, the most common symptoms are present in the temporal arteries (x). Because PMR and GCA are so similar, researchers think that they may be possible variants of the same disease process (x). Even though these two disorders are considered to be linked inflammatory conditions, they actually affect different parts of the body (x).

This rare inflammatory disease is known for causing degenerative changes in the body’s muscles and connective tissue. The neck, abdomen and upper arms and legs may experience rapid muscle weakness. Joint pain, swelling and tenderness is also common with this rare disease. This eventually makes it hard for patients with this disease to get up from a seated position (x).

This is a chronic pain disorder where pain is felt throughout the body’s muscles and brings about abnormal amounts of fatigue. The word “myalgia” actually stems from the Greek word for “muscle pain.” For this reason, polymyalgia rheumatica is sometimes confused for fibromyalgia, which is another pain syndrome (x). However, fibromyalgia does not cause inflammation in the joints and muscles as PMR does (x).

While there is not one specific cure for polymyalgia rheumatica, treatment focuses on reducing overall pain and inflammation and decreasing stiffness, achiness and other symptoms. PMR normally requires long term treatment with glucocorticosteroids. This type of treatment improves the patient’s symptoms very quickly. However, they can sometimes have serious side effects. Most patients achieve remission when using a 15 mg daily dose of prednisone (x).

Other common treatments and remedies for PMR and its accompanying symptoms include natural supplements and vitamins including the following:

If you have PMR, your doctor or healthcare provider may suggest taking a vitamin D supplement. This will help prevent bone loss, which can be induced by corticosteroid treatment for the disorder. According to the American College of Rheumatology, the recommended dose for a person taking corticosteroids is 50mg (x).

There is strong evidence that says turmeric works as a pain reliever and anti-inflammatory for people with conditions that cause pain, such as arthritis and fibromyalgia. Since these conditions are similar to PMR, turmeric may be used for symptom relief in people with PMR (x, x).

Calcium is important to take if being treated with glucocorticosteroids to help prevent loss of bone density. According to the American College of Rheumatology (x), the recommended dose for anyone taking corticosteroids is 1,200 to 1,500 mg of calcium daily.

Regular exercise is a recommended treatment for patients with PMR. Low-impact exercise activities like swimming, walking or riding a stationary bike are especially recommended. In addition, physical therapy may be added to help the patient maintain their mobility and help to ease discomfort and pain (x).

Always consult your physician or healthcare provider before adding any medications, vitamins or supplements into your daily routine, especially if you are pregnant or nursing.

Polymyalgia rheumatica (PMR) is the most common inflammatory disorder effecting Caucasians over the age of 50. It is more common in women than it is in men. PMR symptoms vary case by case. However, the most common symptoms reported are muscle pain and stiffness in the shoulders, neck and hip. It is commonly associated with giant cell arteritis as they have similar symptoms, but occur in different parts of the body. PMR is commonly treated with corticosteroids, but symptoms of PMR can also be treated with vitamin D, turmeric, calcium and low-impact exercise.