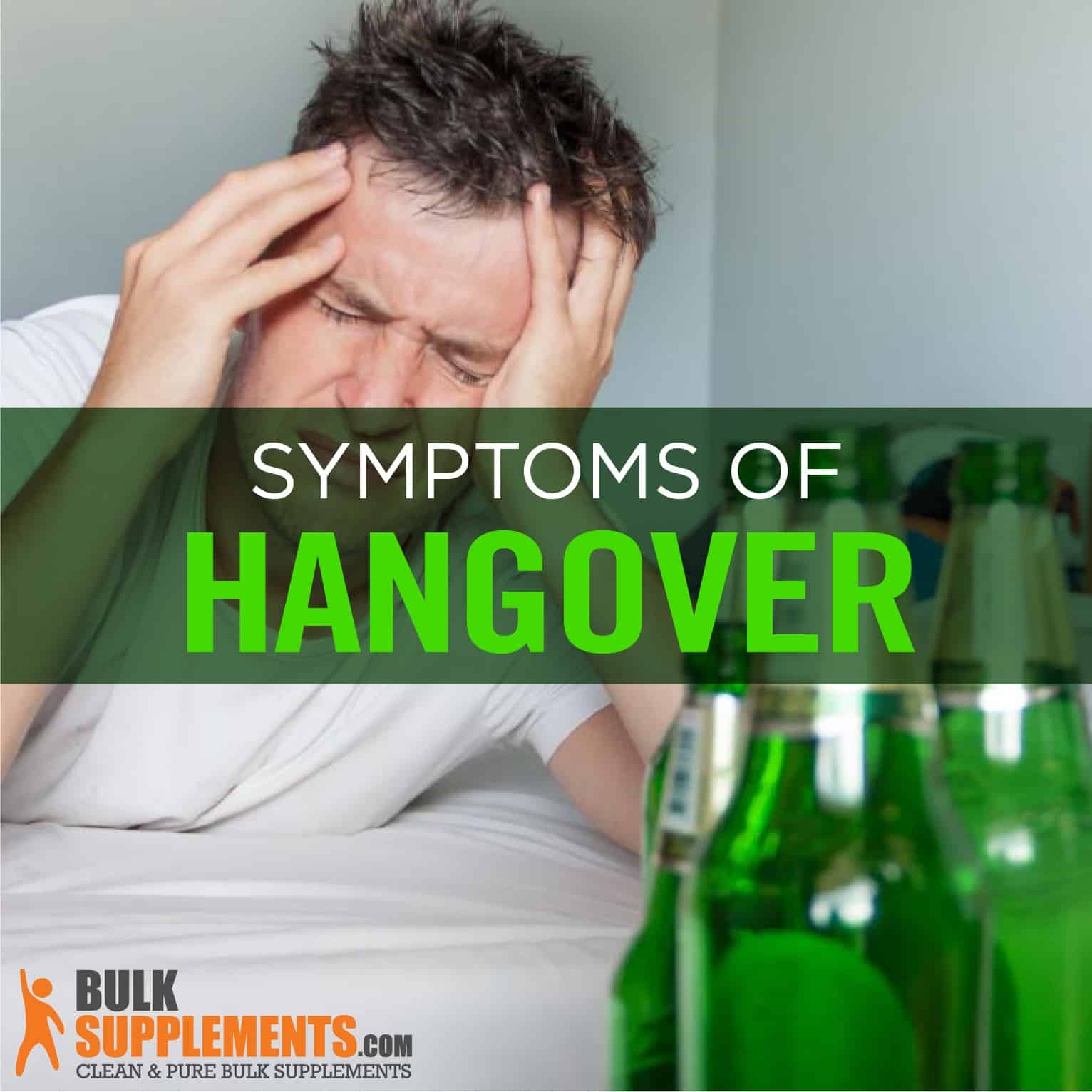 What is a Hangover?

You go to parties, office luncheons and birthday celebrations where the host or hostess serves alcohol. Not only do you feast, but you also consume alcohol. As a result, you wake up the following morning with a hangover, which you then nurse for the next day or two.

As you may have experienced, a hangover is a group of unpleasant symptoms like dizziness, confusion, abdominal pain, headaches, vertigo and nausea that develop after consuming too much alcohol. An estimated 77 percent of drinkers have reported suffering from a hangover, meaning there are some people who don’t have hangovers. (x)

These symptoms start as the blood alcohol level drops when you’ve stopped drinking. (x) A hangover can occur any time of the day but is more common in the morning — after sleeping it off.

Apart from physical symptoms, you may experience increased regret, embarrassment, anxiety and depression because of guilt of having drunk so much alcohol. The severity of the symptoms is subject to the amount of alcohol consumed and the quantity of sleep you’ve had. Less sleep typically means a worse hangover. In addition, alcohol interferes with brain activity during sleep, so that a hangover may be a form of sleep deprivation. (x)

No cure for hangovers doesn’t exist yet, but some remedies can help to speed recovery. Some include rehydrating, taking a nap, taking a walk and eating healthy meals with complex carbohydrates and proteins. Since breakfast is the most hangover-related meal, it could be a hangover remedy if boosted with bacon and scrambled eggs. Some enjoy a hamburger with French fries — not the healthiest of foods, but effective.

History of the Hangover

For centuries, parlor jokes, stand-up comedy, theatrical plays, and movies refer to the hangover as a hilarious situation no one wants to go through. Egyptians, Greeks and the Old Testament writings describe hangovers. And, there is a good chance prehistoric cultures also suffer many hangovers.

Though ancient civilizations had their fair share of hangovers, they probably didn’t use the word “hangover”— more like “after-effect.” That is what it is, an after-effect of drinking too much alcohol. “a thing or person remaining or left over; remainder or survival, an after-effect.” (x)

The primary cause of your hangover is consuming too much alcohol, which causes several adverse effects that vary among people. They include:

An excessive amount of alcohol increases the urination rate, which causes dehydration symptoms like light-headedness, thirstiness, and dizziness. (x) It is because alcohol is a diuretic, which means it makes a person want to urinate more, compromising your kidneys.

Alcohol can cause an inflamed stomach lining, which leads to stomach pain, nausea and vomiting. Alcohol also triggers excess stomach acid production, which may cause vomiting blood and ulceration. Another effect caused by alcohol is your intestines decrease water absorption, which can lead to diarrhea. Alcohol can also lower or increase the passage of food through the gastrointestinal tract.

Alcohol consumption can impair the immune system. In fact, it may trigger an inflammatory response from the immune system that causes specific agents to produce physical symptoms, such as memory problems, difficulties concentrating, loss of interest in everyday activities and loss of appetite.

Alcohol causes blood vessels to widen or expand, leading to headaches once you wake up. Alcohol consumption can have effects on serotonin, histamine and prostaglandins hormones that may contribute to headaches. (x)

Alcohol can cause a decrease in the blood sugar level and limit glucose production in the body. Your body tries to excrete alcohol, and your blood sugar level drops. It causes weakness, fatigue, dizziness, mood disturbances, shakiness and seizures. (x)

Drinking alcohol interferes with the body’s electrolyte levels. The body can also lose electrolytes through vomiting, diarrhea and sweating. Electrolyte imbalances can cause weakness, headaches and irritability. (x)

These symptoms vary from individual to individual and can vary in intensity from mild to severe. At times, they can derail one’s entire day.

Other Factors That Can Contribute to a Hangover

When you drink too much alcohol, other factors contribute to your hangover:

Alcohol metabolites also have effects on your body. Acetaldehyde is the enzyme that metabolizes alcohol, and then a second enzyme (aldehyde dehydrogenase) metabolizes acetaldehyde to acetate. Different individuals have genetic variants of ALDH that make acetaldehyde accumulate in the body, leading to toxic effects. According to researchers, acetaldehyde is usually not in the body as one’s blood alcohol level gets to zero, but the harmful effects can persist into the hangover period.

It is an ingredient found in alcoholic beverages that gives them their distinctive flavors and can cause hangovers. They are chemical by-products of the fermentation process and include tannins, acetaldehyde and methanol. You find them in large concentrations in darker beverages like red wine and bourbon, more so than in clear drinks like gin and vodka. Vodka contains the least or almost no congeners at all. Congeners will most likely cause a hangover or increase the severity of a hangover. A study conducted in 2012 showed that participants who drank bourbon had a worse feeling because of its high congener content than those who drank vodka. (x)

Some research conducted in 2013 and 2015 suggested that young people are likely to suffer more severe hangovers than adults. (x) (x)

It can increase the risk of experiencing severe hangover symptoms. It’s because food helps decrease the rate at which the body absorbs alcohol into the bloodstream.

There is an interesting theory that may make for a great conversation during a dinner party. Supposedly, unique personality traits may play a role in hangover symptoms. People with defensiveness, neuroticism and anger issues are likely to have severe hangover symptoms. Another theory is traumatic life events and negative feelings of guilt may be associated with suffering more hangovers. The individual at a higher risk of developing alcoholism also suffers more acute hangover symptoms. These theories are just that, hypothetical ideas, something to share during a party or wine tasting.

Another conversational piece is that according to research, women are most likely to experience hangovers than men. (x) If a woman and man who weigh the same take precisely the same amount of alcohol, the woman will have a more significant blood alcohol content because there is less water in the female body to dilute it. (x)

Genetic factors may influence the symptoms of a hangover. For example, as little as one drink can lead to vomiting, flushing and sweating in individuals with a particular genetic variation. In addition, having a family history of alcoholism can also impact how an individual’s body processes alcohol. (x)

Heavy drinkers sometimes smoke cigarettes and use other drugs. These substances may cause their own set of hangover symptoms.

Different people experience hangovers diversely. Symptoms usually vary depending on factors like personal chemistry, food in the system and the amount of alcohol consumed, among other factors. Some of the common symptoms include:

There is no magic cure for a hangover, except drink less the night before — some report matching a glass of water with a glass of alcoholic drink. The only way to find relief is to allow the body to rest and recover by consuming healthy foods and beverages. Some natural remedies for a hangover are:

Alcohol consumption causes dehydration. You need to take enough water to return your hydration levels to a healthy or normal range. People should drink water consistently after waking up in the morning. Sports drinks may also help recover lost electrolytes.

It’s beneficial to eat before or while drinking alcohol. Alcohol will absorb more quickly on an empty stomach. Eating means absorption will be slower.

Some essential oils include rosemary, lavender, peppermint, cardamom and fennel. Inhale these oils using a vaporizer to help re-energize, alleviate headaches and pain, and relieve nausea and vomiting.

The hair of the dog is when you drink to ease the symptoms of a hangover. It’s because of the notion that hangovers are a form of alcohol withdrawal so that drinking can reduce the withdrawal. But, of course, this is not true.

Alcohol depletes vitamins and minerals from your system, so it makes sense to refuel your body with the much need nutrients:

Milk thistle is an herb that can help protect the liver from toxins and the effects of alcohol. (x) As a dietary supplement, take 250 mg (scant 1/8 tsp) of milk thistle extract powder daily or as showed by a medical professional. You can take it with or without food.

This supplement helps increase glutathione and lower acetaldehyde toxicity, which is the source of many hangover symptoms. It would help if you took N-acetyl L-cysteine (NAC) powder in serving sizes of 600 mg (scant ¼ tsp) up to three times per day or as directed by a physician.

Ginger tea can help with digestive upset and stabilize blood sugar levels, which are adversely affected by alcohol consumption. It can also help to stave off vomiting and settle the stomach. (x) Take 1,000 mg (about ½ tsp) of ginger root extract powder once daily or as directed by a physician.

Research over the decades has proved that alcoholics are deficient in B vitamins. Thus, when going through withdrawals, high-doses of B vitamins is the recommendation. You can correlate that with remedying a hangover with an excellent B-complex vitamin. (x)

Taking 200 mg of B1 vitamin before you go to sleep after a night of drinking may help reduce the depression and irritability caused by your alcohol consumption. Note that B1 helps with alcohol dependency. (x) A clinical trial proved that B1 reduced the abusive drinking patterns of participants over six months. The study also suggested the possibility of B1 deficiency causing alcoholic problems and abuse. (x)

Where to Buy Supplements for a Hangover?

You can purchase these supplements for a hangover at BulkSupplements.com. The company is an industry-leading manufacturer and distributor of pure dietary supplements.

Are you interested in trying any of these supplements mentioned in this article as a possible solution to helping you with your hangover? Contact BulkSupplements.com to place an order today.

A hangover refers to a group of symptoms that appear after overindulging in alcoholic drinks. Its symptoms vary from mild to severe, and they include vertigo, headaches, nausea, memory loss and loss of coordination.

If you wake up the next day with a hangover, consider rehydrating with water and electrolytes, taking the vitamins and minerals mentioned above and eat a high-carb breakfast.