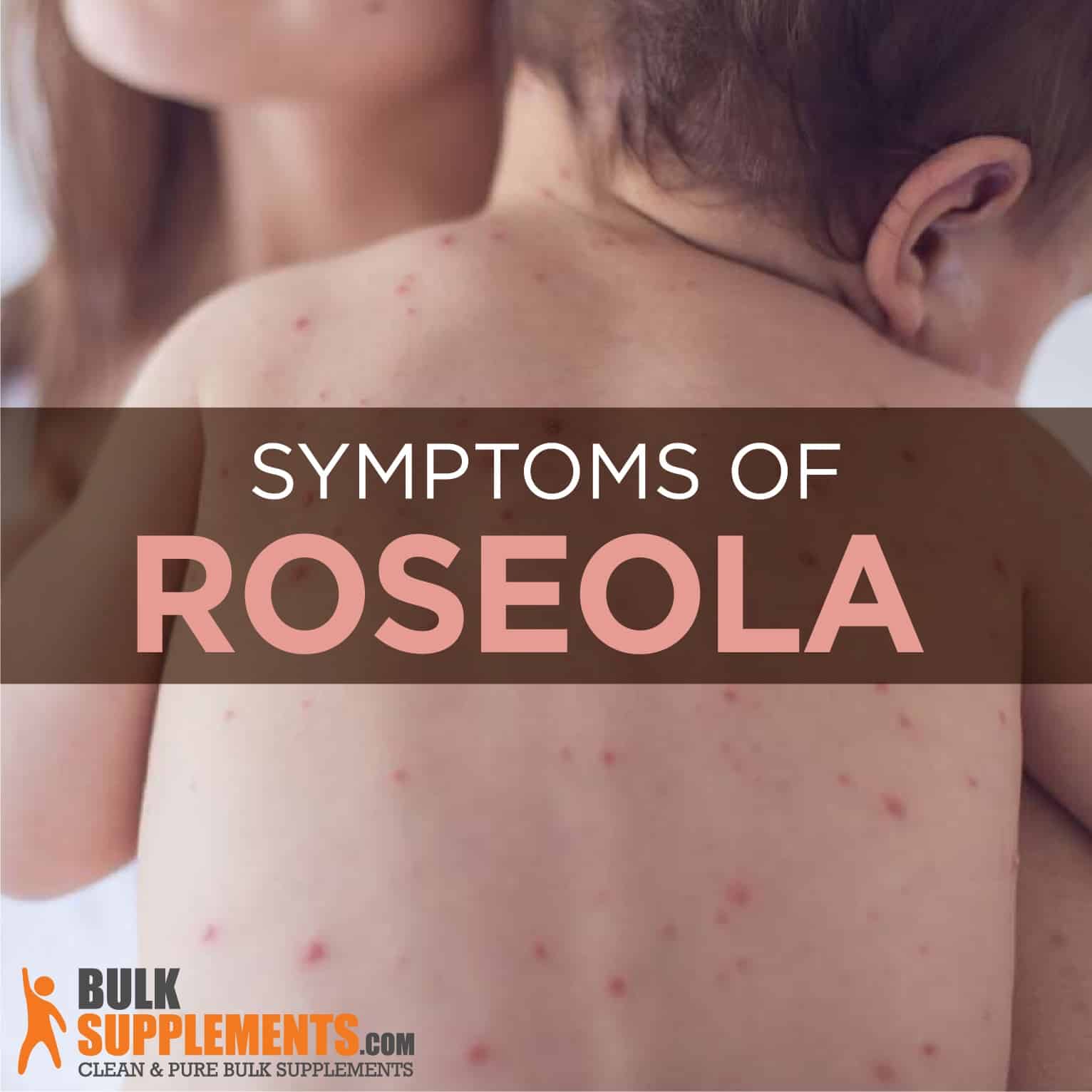 Roseola is also known as the sixth disease, rash after fever, roseola infantum and exanthem subitum. This disease brings several days of high fever. And when that fever starts to break, a rash, usually pink, follows. Roseola usually affects children between 6 months and 2 years old (x).

Generally, roseola is not a serious condition and rarely causes complications. In fact, some kids that have this disease may not even show any symptoms, while others show the full range of symptoms. Treatment involves lots of bed rest, medication and taking lots of fluids. However, roseola often runs its course even without treatment (x).

The skin rash that accompanies roseola infection often resembles the one for measles. However, there are distinct differences between the two types of rashes. A measles rash is reddish and usually starts in the face before spreading downwards to the entire body (x).

On the other hand, the rash that is caused by roseola is pinkish and usually begins on the tummy and then spreads to the arms, legs and face. The condition of roseola patients often begins to improve once the rash appears. However, if a child has measles, he or she will still feel ill even when the rash appears (x).

Type 6 and 7 human herpes virus, from the same family as the herpes simplex virus, cause roseola (x). However, the main difference between the two types of viruses is that the herpes virus causes cold sores and affects the genitals while the roseola virus does not (x).

How Roseola is Spread

Like other viral diseases, roseola is contagious and may spread through contact with respiratory fluids and oral secretions (x). The incubation period for this virus is between nine to ten days (x). The virus that causes this infection does not affect animals; humans are its only natural host. The risk of Roseola infection exists throughout the year and is not affected by seasonal changes (x).

The symptoms of roseola usually appear within the first five to 15 days of infection (x). However, the symptoms of this condition may not be noticeable in some cases.

A common symptom of roseola is a rash. This rash starts on the torso and spreads to the arms, legs, face and neck. A typical roseola rash is often pink, small and flat or raised. Some rashes may also have a halo around them or a ring that is slightly lighter than the primary rash’s color. Also, a roseola rash usually disappears or fades when you press it with a glass.

In most cases, the rash does not cause itching and usually disappears within a few days. However, some may not develop the rash.

Other symptoms include (x):

Most people infected with the roseola virus may not show any symptoms because the virus clears from the body before it can cause symptoms (x). However, even those who develop symptoms rarely experience side effects. Nevertheless, infected individuals with weak or compromised immune systems such as infants, people on cancer treatment or those with HIV-AIDS, may experience some complications (x).

Complications arising from a roseola infection are quite rare because most people make a full recovery approximately seven days after the first symptoms appear (x). However, some people may experience severe complications.

Typical characteristics of a seizure include loss of consciousness, loss of bladder or bowel control and jerking of the arms, legs or head. Although many parents will find these alarming, febrile seizures are mostly harmless. Nevertheless, seek immediate medical attention if your child experiences seizures (x).

If people with weakened immune systems are infected by roseola, they may experience severe symptoms and may find it difficult to recover from the infection. Additional complications of roseola include pneumonia and encephalitis or inflammation of the brain, which can be life-threatening (x).

Diagnosing for roseola is not easy because it often does not show any symptoms. And even when symptoms occur, they resemble those of other childhood illnesses (x). Doctors may diagnose roseola by observing the patient for the characteristic rash associated with the disease. They may also inform parents of the signs to check for when caring for their babies at home. A blood test may be done to confirm a roseola diagnosis (x).

Be that as it may, consult a doctor immediately if your child starts showing these symptoms (x):

One of the drugs used to treat roseola fever is Tylenol (x). Alternatively, doctors may prescribe ibuprofen for fever relief. Both drugs are equally effective in treating the fever that comes with roseola infection. Never give aspirin to young kids and adolescents.

Doctors often recommend various remedies to manage the symptoms of roseola and reduce the discomfort that is associated with the infection. Roseola patients need lots of rest and fluids (x).

It is essential to remain hydrated by regularly drinking water (x). Some of the fluids recommended for the management of roseola symptoms include (x):

Doctors may prescribe some over-the-counter medication to be given to children with roseola to provide pain relief. Parents should always read the instructions on the packaging for accurate information on dosage and timing. Avoid giving aspirin to children below the age of 16 due to its link to Reye’s syndrome, which can be life-threatening (x).

Doctors may prescribe an antiviral medication such as cytovene (x) for people with weak immune systems to prevent virus replication. Antibiotics are not recommended for treating roseola because they are ineffective against viruses.

To manage the symptoms of roseola, allow your child to rest for as long as possible (x). If he or she has the energy, let them play. Nevertheless, they shouldn’t overexert themselves or be around other kids because roseola can be contagious.

To reduce the discomfort that comes with a fever (x):

Your child can go back to normal activities once he or she is fever-free for more than 24 hours. Never sponge a child with alcohol to reduce fever (x).

Home Remedies and Supplements for Roseola

The vitamin C supplement calcium ascorbate is a neutral salt that boosts the absorption of calcium. The safe serving size for this supplement is between 300 and 1,000 milligrams taken three times per day. Vitamin C is non-toxic and has few side effects. However, an overdose could cause nausea, flatulence, diarrhea and vomiting. The side effects will decrease if you lower the dosage.

Talk to a physician for supplementation advice if you have a copper deficiency or problems with storage of iron. In addition, do not use vitamin C supplements if you are pregnant.

Zinc supplement aids digestion and supports reproductive and immune health. The suggested dosage is no more than 77 milligrams per day. For the best results, consider taking this supplement with magnesium, copper and vitamins B and C. Overdose may cause side effects such as skin irritation, rash and itching.

Avoid taking this product if you are allergic to zinc, expecting or lactating. In addition, store in a cool, dark place to preserve potency.

This is a powerful antioxidant with multiple health benefits. This product supports cardiac and immune health and may minimize the risk of certain cancers. In addition, it prevents mental decline and supports thyroid health. The recommended dietary allowance for this supplement is between 55 and 75 milligrams per day. Selenium can also be found in pine bark extract and bearberry leaf extract. As with all supplements, consult your doctor beforehand.

In addition to its calming effect, chamomile boosts skin and digestive health. This product helps minimize the risk of anxiety and inflammation. For the best results, take 800 milligrams twice per day with lots of water.

Drowsiness is a common side effect of chamomile. Therefore, do not drive or operate heavy machinery if you experience this side effect. In addition, avoid using chamomile tea if you are in a maternal condition or lactating.

Echinacea has been used for many years to promote immune and skin health. The recommended dietary intake for this supplement is 450 milligrams taken twice per day. Although this supplement is generally safe for use, avoid taking it if you have autoimmune disorders or if you are allergic to daisy, ragweed or marigold. Expectant and nursing women should not use echinacea supplements.

Roseola does not have a vaccine (x). Therefore, prevention involves limiting exposure to people who show signs of infection. On that note, parents should restrict contact between healthy children and those who have roseola until the symptoms subside.

Parents taking care of children who have roseola should wash their hands after contact with the sick children to avoid transmitting the infection to other kids. If possible, wipe down high traffic surfaces with antimicrobial spray. In addition, teach your child proper hygiene such as sneezing on tissues and disposing of the tissues properly. In addition, avoid sharing utensils with infected persons (x).

Roseola mostly affects children below the age of 2 (x). Typical symptoms include a fever followed by a pinkish rash. In most cases, roseola does not require medication and often clears from the system in a few days. However, severe symptoms are expected in people with weak immune systems. Fortunately, medications and home remedies for managing the symptoms are available.