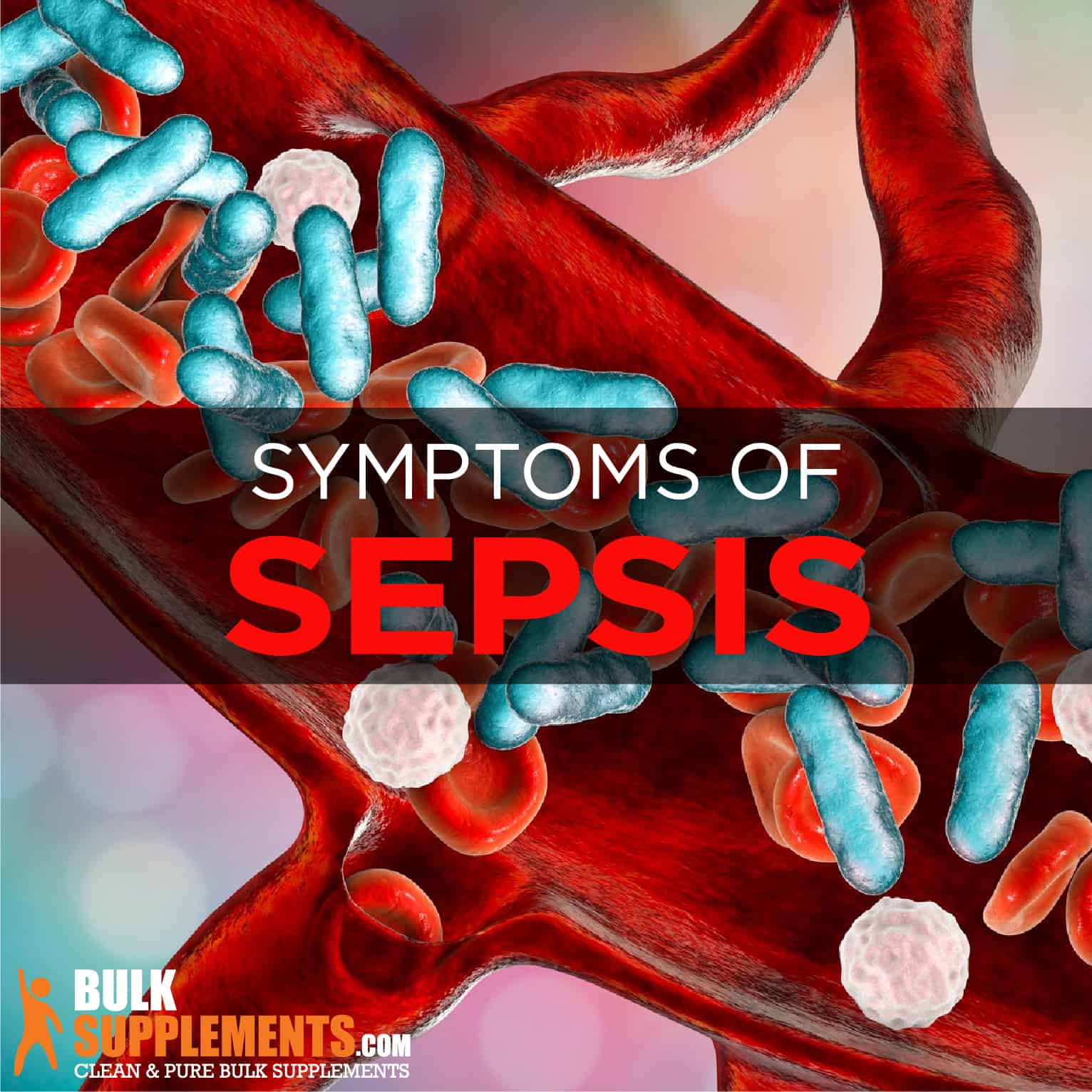 Sepsis is a critical medical condition that occurs as a result of the response of the body/immune system to a particular infection. Typically, chemicals are released into the bloodstream to help counteract the effect of the infection and fight it as well. However, sometimes the body is unable to respond to these chemicals correctly. This is known as sepsis.

One of the criteria for sepsis to occur is that there must be the presence of an infection (x). Depending on the nature of the infection, the body’s immune system may work overtime in order to combat this. The chemicals released for this purpose can then lead to massive inflammation of organs within the body. Clotting that occurs during sepsis may greatly reduce the rate of flow of blood to organs and limbs, thereby depriving them of nutrients and, more importantly, oxygen. This could further deteriorate and result in organ failure. The rate of progression of sepsis to organ failure, septic shock and death is diverse and does not exactly depend on the specific underlying infectious disease process (x).

MRSA sepsis, or sepsis from methicillin-resistant Staphylococcus aureus, is a bacterial infection that stems from ‘staph’ and is highly resistant to many forms of antibiotics. If it is left untreated, it can degenerate into sepsis. However, if it is found on the skin, it typically does not result in serious problems (x).

Most, if not all of the symptoms of sepsis are difficult to detect externally, which means that it could be almost impossible for other people to notice until it has degenerated badly. This is because most of the symptoms occur internally and can only be detected by the individual actually suffering from it. Therefore, the importance of knowing the internal symptoms of sepsis cannot be overemphasized. Early detection reduces the probability of the occurrence of endotoxic shock. Some of these symptoms include the following:

A Rise or Fall in Temperature

This is one of the major signs of sepsis in children; their bodies feel abnormally cold to touch (x).

Basically, your body’s temperature should remain fairly constant at about 37 degrees Celsius or 98.6 degrees Fahrenheit. This could vary slightly depending on certain physical factors such as your rate of activity or movement, the time of day and environmental conditions. These are the major factors that result in temperature variation typically.

Hyperthermia or increase in temperature is the most common reaction to this. However, some people experience hypothermia, whereby their body temperature decreases instead. Regardless, both can be signs of sepsis (x).

Since sepsis results from activities of the immune system, the direct symptoms of the infection(s) should be present. For instance, a local infection in an area of the body, such as a urinary infection, an infected cut or even pneumonia, would all have localized symptoms that are unique to these ailments.

In case there is a spread and the infection has become generalized, you may end up with some other signs and symptoms such as pain, fever and fatigue. There are also certain cases where you may have an infection and not be aware of it, especially if it does not exactly exhibit any symptoms. This is more prevalent among people who have had an invasive medical procedure or surgery recently. Similarly, a break in your skin or exposure to someone who is ill could result in this (x).

This symptom could be mistaken for a stress-related ailment or attributed directly to stress, especially when it occurs in people who are active. This stage is very dangerous and could deteriorate fast depending on how long it takes before it is detected. As it starts to get worse, it then becomes evident that it isn’t stress related.

If you are losing cognitive ability in addition to symptoms of infection, you should contact a doctor immediately. This is prevalent among the elderly, who may not even show the typical symptoms of sepsis. However, they could show a sudden and surprising change in mental statuses such as becoming confused or sporting worse cases of dementia and confusion.

Additionally, older patients can present with excessive sleepiness, or sleeping far deeper than they would normally. This form of sleepiness is severe and it could be difficult to rouse them (x).

During the course of this illness, patients might experience a straight line of bumps on the skin, which may be itchy. Multiple organ failure symptoms are also likely (x).

Also, a number of sepsis survivors have claimed that they felt the extremes of every symptom that beset them. Ranging from the worst abdominal pain to the worst sore throat, among others.

This is why most patients experience post sepsis fatigue as well. Generally, sepsis patients have to rest for extended periods of time in order to fully recover their strength due to the severity of sepsis (x).

According to extensive research, bacterial infections are the primary cause of sepsis (x). This includes any bacterial infection that occurs in any part of the body. However, there are certain areas that are a lot more susceptible to bacterial infections, which in turn implies that there is a higher probability of sepsis occurring as a result of infections in these areas. These include the urinary tract, the lungs and the abdominal area.

The pathophysiology of sepsis mainly includes inflammation and coagulation (x). Blood poisoning is one of the early stages of sepsis and occurs when the bacteria enter into the bloodstream (x).

Apart from bacterial infections, it is possible to get sepsis from other viruses. For example, getting sepsis from the flu is a possibility (x).

In addition, candida sepsis, which is sepsis gotten from a form of fungi, is becoming fairly common (x).

Sepsis can also be caused by the aftereffects of surgery. Hospital hygiene and aftercare are important in this area. Staph infections are common in hospitals and need to be dealt with specifically.

The manner in which you manage sepsis determines how quickly you can recover to go back to your everyday life. Most people recover from mild sepsis, but those who go into septic shock have a mortality rate of around 40 percent (x). Sepsis in older patients can be a lot more severe due to the fact that they do not possess systems strong enough to fight it (x). This is why the diagnosis of sepsis at the very early stages is essential to survival. Kidney failure is common during sepsis.

The care plan for sepsis patients should be comprehensive due to the fact that they might require emergency medical attention. For people suffering from sepsis or septic shock, stabilizing breathing and heart function could be necessary for their survival. In the treatment of sepsis, there is a limited number of medications that can be used.

The first step is usually to use antibiotics. This begins immediately upon admission. Initially, a series of broad-spectrum antibiotics which help to fight a range of bacteria would be administered. The antibiotics are usually administered intravenously. Upon carrying out necessary tests and studying the results, you could then be switched to the exact drug that fights these bacteria specifically (x).

Zinc is known to help support appropriate immune response. Hypozincemia is a common phenomenon in sepsis patients whereby the immune system attempts to deprive the pathogens of zinc. Moreover, zinc is also essential for the proper functioning of all immune cells (x).

Zinc should be taken as a supplement under the direction of a physician, up to 200 mg three times a day.

Omega-3 fatty acids may be an effective balance mediator. Nutritional supplementation has been shown to modulate the balance between pro- and anti-inflammatory mediators in sepsis (x).

You can take omega 3 in a soft gel along with omega 6 and 9 for convenience, taking 1 or 2 soft gels a day up to three times a day or as directed.

Carotenoids such as lutein have been shown to possess certain antioxidant properties that combine with other antioxidants to battle certain chronic diseases that are characterized by inflammation and oxidative stress(x).

This is an isomer of lutein and differs with only a double bond. Zeaxanthin basically combines with other antioxidants as well to fight inflammation and oxidative stress that they cause (x).

Use a milligram scale to measure out zeaxanthin powder 100 mg a day, or as directed.

Usually, patients suffering from septic shock experience reduced levels of coenzyme Q10. However, research shows that this could be rectified by supplementing orally. Coenzyme Q10 is essential for producing cellular energy and strengthening the immune system (x).

Take once a day, depending on intended results, in a serving of 50 mg to 200 mg. Consult your doctor.

Stemming from just how serious sepsis is, early detection is key to survival. You should always look out for symptoms, especially if you have some form of infection.

Generally, visiting the hospital when you have an infection is a safer option than voting to take care of it yourself. In addition, do not self-medicate, as severe sepsis can have long term health consequences and even be fatal.

Support general health and a solid immune system with a healthy diet and supplements like zinc and omega 3 fatty acids.