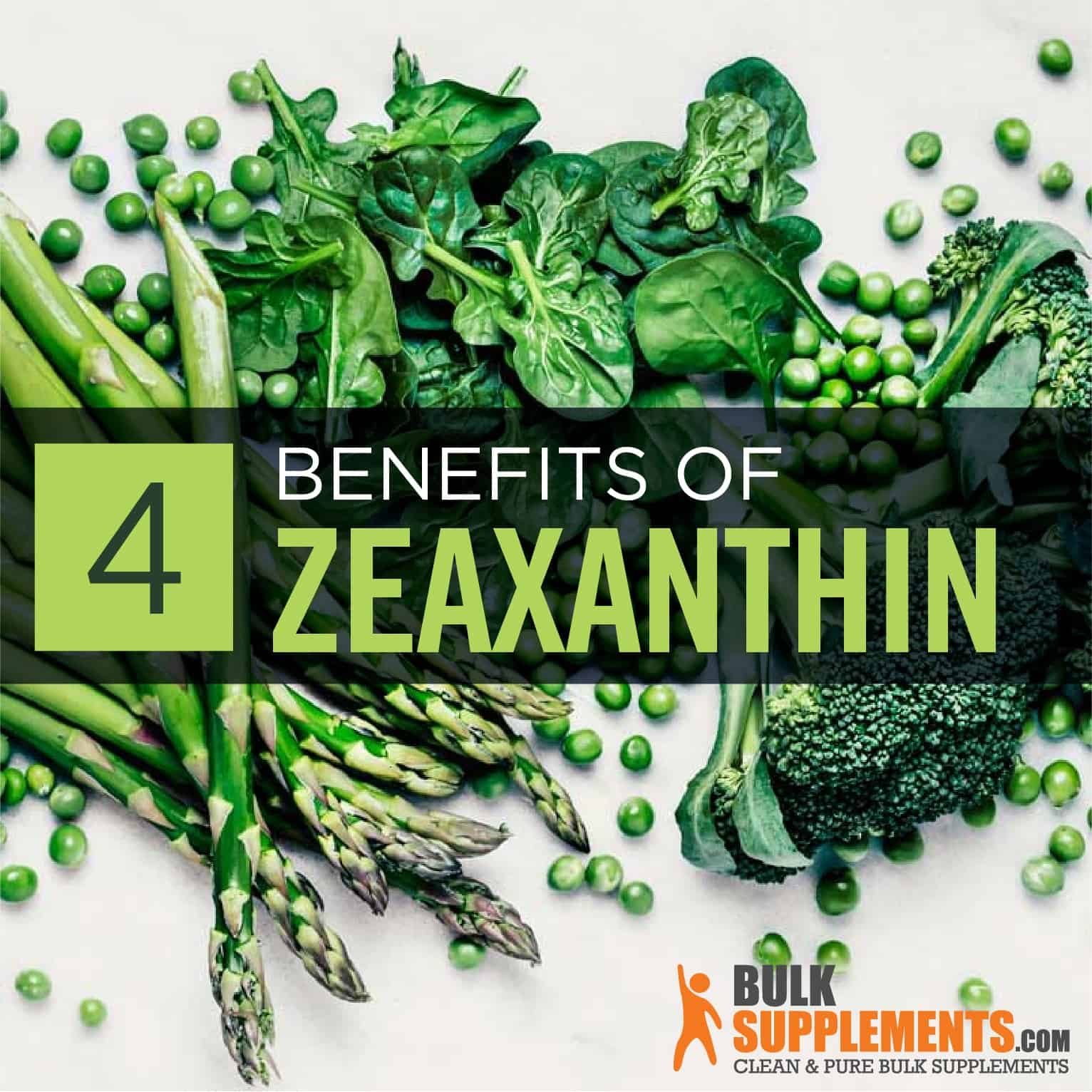 Zeaxanthin is a member of the carotenoid family. Carotenoids are the molecules that give plants their vibrant yellow, orange and red pigments. Zeaxanthin in particular imparts a yellow color on plant-based foods like corn, saffron, wolfberries and paprika. This carotenoid, along with lutein, are heavily present in the retina of the eye (x).

All pigments are good at absorbing specific wavelengths of light, which is why they appear the color that they do. Zeaxanthin is especially good at absorbing blue light. Blue light emits a high energy and therefore is the most damaging light that enters our eyes. Maintaining adequate concentrations of zeaxanthin can help to protect your retina and thus your vision (x).

Zeaxanthin is also a powerful antioxidant. Antioxidants play an important role in the body. They help to reduce the concentration of free radicals. High levels of free radicals have been linked with a wide range of degenerative conditions, such as hypertension, Alzheimer’s disease and Parkinson’s disease. They are also responsible for the effects of aging (x). Unfortunately, the American Optometric Association asserts that the average American’s diet is low in zeaxanthin (x).

When researching zeaxanthin, lutein is likely to be mentioned as well. This is because the two compounds are very similar. In fact, they are isomers of each other, meaning they are the same atoms that are just arranged a little differently (x).

They are both “non-provitamin A carotenoids”. In other words, unlike some other carotenoids, neither can be metabolized into vitamin A or retinol. Both zeaxanthin and lutein are concentrated in the same parts of the body — the retina, skin and brain.

Despite many similarities, these two carotenoids behave a little differently in the body. While both absorb high energy light and provide protection for eyes and skin, lutein is actually more effective at this particular function. However, as zeaxanthin and lutein absorb different ranges of light rays, it is advisable to have adequate intake of both to properly protect the eyes and skin from the effects of UV light (x).

The other notable difference between the two is that zeaxanthin is a more effective antioxidant. Its shape allows it to interact more effectively with free radicals (x).

Zeaxanthin is one of the more popular supplements for eyes. Not only can it help prevent some of the most common age-related eye disorders, but it can help slow their progression once they’ve begun to appear.

The retina is the light-sensitive part of your eye. At the center of your retina is a small area known as the macula that allows you to see objects directly in front of you (x). If you were to look at a diagram of the eye, the macula appears yellow thanks to the concentration of zeaxanthin and lutein found here. When this part of the eye begins to lose its function, usually due to age, it results in a condition called age-related macular degeneration (AMD). AMD is the leading cause of blindness in the elderly (x).

A cataract is another eye condition that develops slowly and becomes increasingly common with age. In fact, over half of people over the age of 80 have cataracts to some degree (x). They’re characterized as a discoloration or clouding of the eye’s lens that ultimately affects vision. As with AMD, studies show that high levels of dietary zeaxanthin and lutein can slow and prevent the formation of cataracts (x, x, x).

We all know that we shouldn’t look directly at the sun because it can damage our eyes. But why is that? When our eyes take in too much direct sunlight, exposure to high energy light rays increases. This in turn causes damage. Zeaxanthin helps to absorb these light rays, preventing them from reaching the most sensitive structures of the eye. It essentially acts like sunscreen for your eyes (x).

In addition to eyes, skin also contains zeaxanthin and provides the same protection against the effect of the sun by absorbing large amounts of the damaging UV light (x).

In addition, if you suffer from dry skin, zeaxanthin supplements could have some beneficial effects. When taken in combination with lutein, it’s been shown to improve the condition and tone of skin. It can also make skin appear more luminous and healthier (x).

The brain is another place where zeaxanthin is present. Here, it acts as a powerful antioxidant to protect your brain cells from the effects of free radicals. As a result, it can help prevent or slow the onset of a range of degenerative conditions (x).

While some decline in cognitive ability is one of the realities of aging, with the correct diet and supplements, it may be possible to slow and even reverse this effect. Research indicates that low levels of zeaxanthin are linked with much faster rates of decline in cognitive health (x). On the other hand, diets higher in zeaxanthin-containing foods are linked with improved cognitive health (x, x). The effects of zeaxanthin supplementation are most pronounced with increasing age and appear to provide the most impressive results following the onset of cognitive decline.

Age-related cognitive decline is not the only area zeaxanthin can help, however. For example, hypoglycemia associated with diabetes can damage some delicate brain cells. Some early studies show zeaxanthin can provide protection for brain cells under these conditions as well (x).

While not fully understood, zeaxanthin has shown some anti-obesity effects. In an animal study, fat tissue production decreased when a high-fat diet included zeaxanthin (x).

We know that zeaxanthin is a powerful antioxidant. Many studies show that antioxidants provide protection from harmful reactions in our cells. This means that having increased levels of antioxidants in your body can prevent both cell and DNA damage. This leads to reduced rates of cancer and degenerative diseases, such as ischemic heart disease and Parkinson’s disease (x, x).

Zeaxanthin is typically yellow in color, so it may be surprising to know that it is found in leafy green vegetables. These vegetables include kale, spinach, mustard greens and lettuce. Some other common foods that contain this carotenoid as well as lutein include asparagus, pumpkin, summer squash, broccoli and carrots (x).

Avocados and pistachios are also some of the best sources for zeaxanthin as well as good levels of healthy fat. The fat content improves the ability of your body to take up the zeaxanthin (x).

As lutein and zeaxanthin are chemically very similar, their values in foods are often quoted together. For instance, 1 cup of cooked spinach contains 29.8 mg of lutein and zeaxanthin (x). What that doesn’t tell you, though, is that practically all of that is lutein. This can make it hard to monitor your consumption levels of these two substances. If you want to ensure you are getting a specific amount of both these nutrients, choosing to use zeaxanthin powder can give you peace of mind.

Zeaxanthin has been extensively studied and no toxic effects have been seen, even at extremely high doses (x, x).

The only reported side effect has been in a small number of cases. Extremely high levels of zeaxanthin taken over a long period of time can cause yellowing of the skin. This is not in any way dangerous and is a reversible cosmetic change.

As a dietary supplement, take 100 mg of zeaxanthin 5% powder one to two times daily, or as directed by a physician. Be sure to use a milligram scale for accurate measurement.

To help your body absorb zeaxanthin, take it along with some healthy dietary fats. Foods like olive oil, avocado or nuts can improve its uptake (x).

As with all supplements meant to promote general well-being, it is important to note that zeaxanthin is by no means a substitute for legitimate medical advice. It is always best to talk to a doctor if you are experiencing problems with your health before taking any supplements.

There are a few reasons why you might consider taking a zeaxanthin supplement. The most common reason is to support your vision. If you are having any eyesight problems or have a family history of cataracts or age-related macular degeneration, adding a zeaxanthin supplement to your daily routine can provide protection from the onset and progression of these conditions.

Those who suffer from dry skin or live in an area with a lot of high-intensity sun can also benefit from zeaxanthin. It can protect skin from the effects of the sun and at the same time improve its overall condition.

If you’re concerned about your cognitive health, or you have passed your 50th birthday, then taking a zeaxanthin supplement can help support your ability to retain control of your mental faculties as you grow older.

Zeaxanthin is a naturally occurring substance found in plants. It has clear links to eye, skin and cognitive health. There are no known negative health consequences to taking it, even in high doses.

Zeaxanthin, especially combined with lutein, is considered the most effective supplement for eye health. It’s also a powerful antioxidant.

Some westerners do not consume enough zeaxanthin from their food and it can be hard to tell how much you’re getting from your diet. Adding it as a supplement to your diet will improve your ability to monitor your intake levels. To get the maximum benefits, you should take it with some healthy fats.