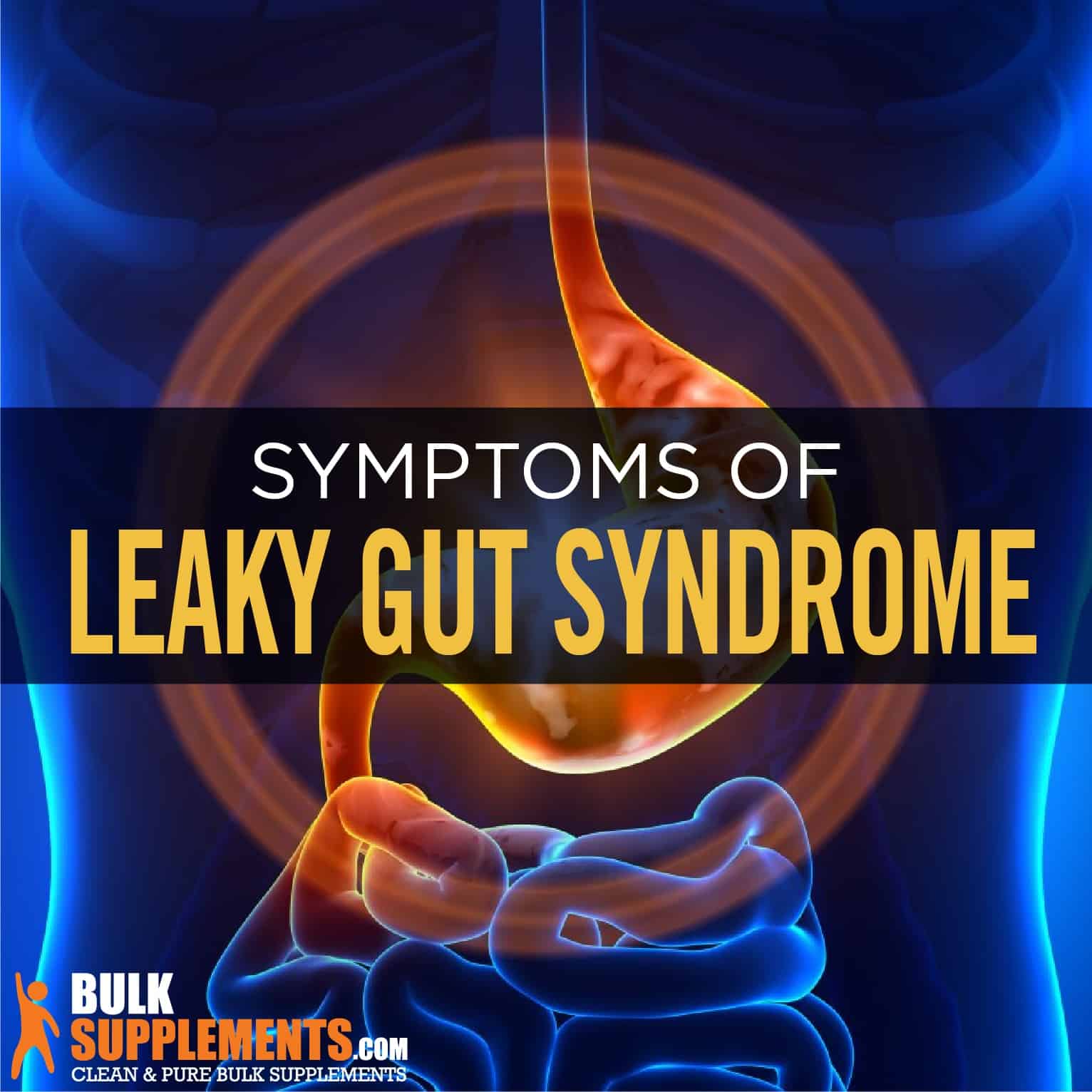 What is Leaky Gut Syndrome?

Leaky gut syndrome refers to a situation whereby the intestines’ permeability rate increases drastically — or becomes leaky. Leaky gut syndrome may not be a condition on its own, but it can indicate that there is an underlying condition that needs diagnosis.

Alongside other components within the stomach, there is an intestinal lining that stretches almost 4,000 square feet. In proper working condition, this intestinal lining makes for a very tight barrier that effectively regulates the substances that will be absorbed into the bloodstream eventually. When the gut lining is unhealthy, there may be holes or cracks which allow for toxins, bacteria and partially digested food to get into the tissues underneath (x).

There are a number of factors that lead to gut irritation. While some of these are beyond physical control, others occur as a result of actions taken by individuals. For instance, it is believed that the gut lining can get irritated and leaky due to factors such as small intestinal bacterial overgrowth and yeast overgrowth, antibiotic overuse or very poor diet. It is also believed that the bacterial toxins, undigested food particles and germs that pass through the gut wall goes on to trigger the immune system, which results in an inflammation that affects the entire body (x).

There may be different reactions to the same food intake depending on the person. This implies that food sensitivity doesn’t usually display the same symptoms in people. For instance, it could lead to some inflammatory reaction such as fatigue or diarrhea. You may notice that it only occurs when you consume a particular food (x).

Typically, when skin conditions are not caused by other factors, they are usually caused by irritation or reaction of the skin to a substance like a new moisturizer or fabric conditioner. However, if the skin is getting inflamed regularly or skin conditions are developing for an apparently unknown reason, this might indicate that it is a symptom of leaky gut syndrome.

Skin conditions such as acne and eczema have been associated with leaky gut syndrome. Inflammation of the skin usually occurs after the patient had been dealing with other symptoms for a period of time (x).

Both diarrhea and constipation are symptoms of leaky gut syndrome, as the whole digestive tract is affected by the relative health of its individual sections.

Weight gain, nausea and fatigue are some other common symptoms that you would experience when you have leaky gut syndrome. High oxalate symptoms such as nausea and vomiting are also likely to occur (x).

Leaky gut syndrome is a phenomenon that researchers are still examining. However, it has been established to an extent that there are certain common characteristics that have been noted in affected individuals.

It has been discovered that zonulin, which is a protein within the body that can be taken in from grains and wheat, is actually an intestinal permeability regulator. However, leaky gut syndrome can begin to manifest in genetically susceptible individuals who have this protein activated. Similarly, a longer activation period worsens the leaky gut.

Candida refers to a fungus or a yeast type. It is present in various parts of the body such as the mouth, gut, throat and vagina and can remain there for a long time without causing any issues.

However, candida yeast can result in infections when there is an overgrowth or when they gain access into the body such as the kidney or bloodstream. Having insufficient levels of healthy bacteria due to candida overgrowth could result in candida sinus. In this case, candida begins to affect the sinuses, resulting in symptoms like post nasal drip and diarrhea. Candida muscle pain is one other condition caused by candida and is one of the signs of candida overgrowth (x).

Gastritis and nausea also have a very strong link due to the fact that stomach inflammation can result in irritation (x).

Autoimmune diseases or disorders refer to the misfunction of the immune system.

Research has also shown that sensitivity to gluten can lead to increase in intestinal permeability, especially in people with irritable bowel syndrome or celiac disease.

Small intestinal bacterial overgrowth is one of the conditions that have been associated with leaky gut syndrome as well. Excessive sugar intake alongside consumption of large amounts of alcohol can lead to increase intestinal permeability. Certain foods result in an increased amount of mucus within the intestines, which slows the movement of food through the gut down. When this slowing down occurs, it presents an opportunity for bacteria and food particles to permeate the intestinal wall. From here, the condition begins to build up (x).

A leaky gut syndrome test is carried out by determining the levels of lactulose and mannitol, which are indigestible sugars. A urine sample is collected to check the levels of these sugars, and this is used to determine whether or not an individual has a leaky gut. Lazy bowel syndrome, or otherwise known as slow gut or sluggish bowel is a condition that has symptoms that include painful bowel movement and constipation. It is mainly described as intestinal reaction to an overuse of laxatives. Yeast overgrowth diet refers to one that removes gluten, alcohol, sugar and certain dairy products, which are believed to result in candida overgrowth (x). Diagnosing these underlying causes and subtypes of leaky gut syndrome is key in developing a treatment program.

For one, you would definitely need to consume foods that heal the stomach lining, such as vegetables, roots and tubers, fruits and gluten-free grains, among others. This is how to improve the digestive system naturally, and it also aids the growth of beneficial gut bacteria. The leaky gut meal plan basically consists of foods that help to heal your gut lining. A dysbiosis diet is one that helps to increase the number of beneficial bacteria present.

Herbs for leaky gut provide the gut with the nutrients that it needs to heal. Similarly, some warning signs include fatigue, weight gain, constipation and skin reactions, among others. Glutamine for leaky gut is considered the most important nutrient that is required for healing leaky guts due to the fact that it serves as fuel for colonocytes and enterocytes.

Foods to avoid with autoimmune disease include eggs, all dairy products, legumes, all grains, nightshade vegetables and a host of others. Vitamins for leaky gut treatment are also advised, as well as other natural processes (x).

Treating leaky gut syndrome requires a diet change and elimination of foods that your body regards as toxic. Basically, this involves getting rid of gluten, soy, alcohol, caffeine and refined sugar. Healing gut inflammation usually requires a number of massive changes to your lifestyle, especially what you ingest. Similarly, leaky gut supplements are a lot of help as well and serve as natural remedies for intestinal inflammation (x).

Probiotics for stomach pain also help to restore the healthy bacteria within the gastrointestinal tract. This is essential because you need to up the number of beneficial bacteria within the gut in order to balance the levels of harmful bacteria. Essential ingredients that aid proper digestion include bile acids and hydrochloric acids. Providing the essential nutrients that the gut requires to heal itself is also an important part of the entire process. Intake of an amino acid such as L-glutamine helps to rejuvenate the intestinal wall lining (x).

Slippery elm bark has been in use since the medieval period. It is well useful for its beneficial properties to humans and to the gut in particular.

The suggested serving size for slippery elm bark extract powder is 700 mg once a day, or as directed by your doctor (x).

Glutamine is an essential amino acid required by the digestive tract. It is best known for its function in repair of the gut lining. It has also been shown to support the growth and survival of intestinal cells or enterocytes (x).

Take 1 or 2 glutamine capsules up to three times a day, about an hour before eating. Consult with a doctor before adding this to your diet and avoid entirely if you are pregnant, have Crohn’s disease or liver damage (x).

Take ¼ teaspoon of licorice root extract powder or as directed by a doctor (x).

Black radish has a lot of health benefits. One of which is that it helps to get rid of toxins within the body. Black radish extract powder also improves digestion and strengthens the immune system.

Fish oil is rich in Omega-3, which is famous for its ability to battle inflammation (x). Take up to 2 capsules of fish oil softgels up to three times per day, or as recommended by your doctor (x).

Curcumin has anti-inflammatory properties, which are of great benefit to the gut (x). Take a maximum of 1,000 mg a day which is less than ½ teaspoon, under direction from a doctor (x).

Leaky gut syndrome results from damage to the lining of the digestive tract. The treatment of leaky gut is relatively simple — a person affected must change their diet in order to minimize inflammation and heal the gut lining. Several supplements can help in this task, from fish oil to slippery elm.

Remaining hydrated and monitoring the condition while consulting a doctor is also important when dealing with leaky gut syndrome.