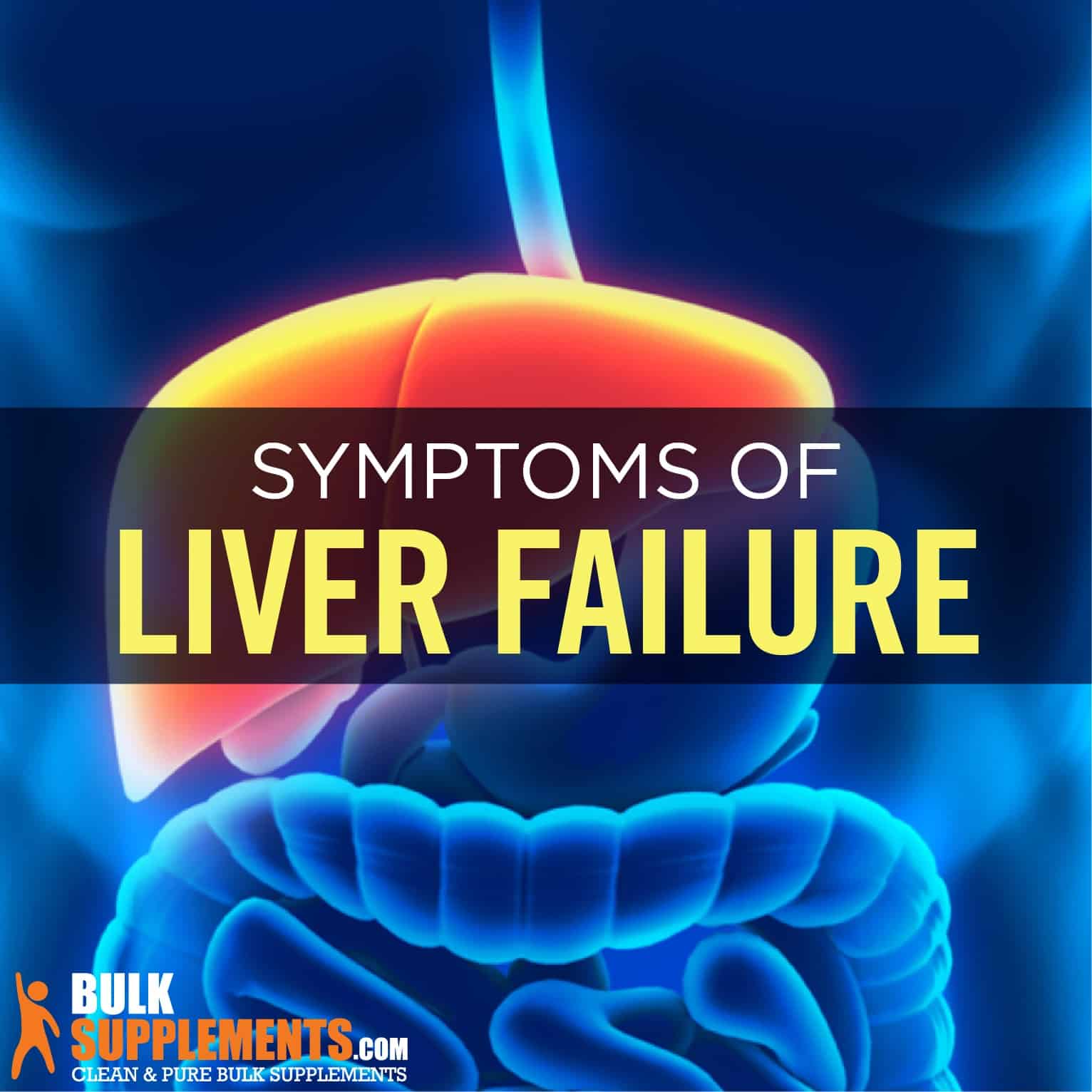 What is Liver Failure?

The liver is the largest gland in the human body. It is crucial for protein production and filtering waste products. The liver creates bile for digestion, detoxifies the body and stores sugar and fat as energy. When the liver doesn’t function properly, it can affect the whole body. Liver failure occurs when large portions of the liver become damaged beyond repair, making it difficult for the liver to function (x). Liver failure is a life-threatening condition. Research indicates that about 30 million people in the U.S. suffer from liver disease (x).

Most often, liver failure is a chronic condition, meaning it develops gradually over many years. However, the condition may also be acute and the liver fails very rapidly (x). Some of the most common factors that lead to chronic liver failure are hepatitis infections and alcohol consumption that cause scarring in liver tissue. Common causes for acute liver failure include drugs, exposure to toxins, infections and metabolic disorders (x).

The initial signs that a patient’s liver is failing are not very specific, so patients and doctors may mistake them for other health conditions. But as the condition progresses and the liver weakens, symptoms change and get worse (x).

As the liver weakens, the symptoms become much more severe. They include jaundice, severe fatigue and ascites. Jaundice causes the skin and whites of the eyes to look yellow and ascites develop from fluid accumulating in the abdomen, which causes swelling. The patient also bleeds and bruises very easily and excessively through small cuts and wounds and it may be difficult to control it (x). Liver failure may also cause pruritus—itching— because bile products can buildup under the skin (x).

Contrary to chronic liver failure, acute cases develop quickly. Patients’ health can decline very suddenly and the condition may become life-threatening in as little as a few days (x). Some symptoms of acute liver failure are similar to chronic cases, such as jaundice, nausea, diarrhea and vomiting blood. However, acute cases cause bad breath and difficulty moving. The patient may also experience pain in the upper right side of the abdomen as well as mental changes like confusion, drowsiness and disorientation (x).

Liver failure develops when the liver becomes damaged beyond repair and cannot perform its daily functions. The causes of the conditions vary depending on the type. There are different factors that cause acute cases versus chronic cases.

Cirrhosis causes severe scarring in the liver, meaning a large part of the liver cannot fulfill its functions. Scar tissue gradually replaces healthy tissue, which means the liver loses its ability to function. According to the American Liver Foundation, alcoholism is the most common cause of cirrhosis among people in the United States (x). Normally, the liver breaks down alcohol. But if an individual consumes an excessive amount of alcohol over a long period of time, the liver becomes unable to do so. Toxins in the alcohol might cause inflammation and swelling in the liver. This damage eventually develops into cirrhosis.

Hepatitis is a viral infection that either develops from the hepatitis C virus, hepatitis B virus or excess alcohol consumption. These are the most common causes, but it may also develop from drugs or nonalcoholic fatty liver (x). Hepatitis is a common cause of liver failure that causes inflammation in the organ. Chronic hepatitis can develop over long periods of time, slowly damaging the liver. In addition to organ failure, the inflammation causes severe scarring (cirrhosis) or liver cancer (x).

Hemochromatosis is a metabolic disorder in which the body absorbs excess iron and then stores it in very large quantities. This can cause damage to the liver and other vital organs because the body may not be able to get rid of the extra iron. Patients are at a high risk of developing hemochromatosis if they have frequent blood transfusions or chronic liver disease or if they are undergoing dialysis (x).

Acetaminophen overdose can cause acute liver failure. In fact, it is the leading cause of acute liver failure in the United States. Patients’ liver can start to fail after they take large doses higher than the recommended serving. Acetaminophen is a very common drug to reduce mild to moderate pain or fever and it is generally safe. However, in large doses it can cause toxicity in the liver (x).

Like chronic cases, hepatitis infections can also lead to acute liver failure and damage the liver very quickly. Several strains of the virus—like Hepatitis A, B, C and E—can severely damage the liver (x). Liver failure can also occur develop as a result of autoimmune hepatitis. This is a condition in which an overactive immune system mistakenly attacks healthy liver cells, causing inflammation (x). In rare cases, acute liver failure can also develop from the herpes simplex virus, Epstein Barr virus and cytomegalovirus (x).

Although rare, some species of wild mushrooms like Amanita phalloides can cause immediate, severe damage to the liver if someone mistakes it for a safe, edible mushroom (x). Carbon tetrachloride is an industrial chemical in varnishes, solvents for wax and in refrigerants. It is another toxin that researchers have identified as a cause for acute liver failure (x, x).

Using prescription drugs, over-the-counter drugs and illicit or recreational drugs can cause injury to the liver. Patients who use anticonvulsants, antibiotics or non-steroidal anti-inflammatory drugs (NSAIDs), for example, may be at an increased risk. When drugs enter the body, they can cause direct or indirect damage to the liver when it tries to break them down into nontoxic chemicals (x).

Wilson disease is a metabolic liver disease that develops when the body cannot remove excess copper. The metal accumulates in the liver, brain and the eyes. Even though the body needs copper to stay healthy, too much of it can cause organ damage (x).

Doctors diagnose liver failure by evaluating the patient’s symptoms with a physical exam. The doctor also performs a blood test to measure enzymes and liver function, followed by other blood tests, urine tests and a chest x-ray to look for complications. The doctor will also try to figure out the cause of the condition by asking the patient about prescription and over-the-counter drugs, as well as alcohol and illicit drug use (x).

Treatment for liver failure depends on the underlying cause and whether the condition is acute or chronic. Doctors advise different dietary restrictions to protect the liver and the patient may even require a liver transplant. In acute cases, the patient needs immediate treatment. Without treatment, liver failure can be fatal. It can cause complications in the body like jaundice, kidney failure and gastrointestinal bleeding from varicose veins and even hepatic encephalopathy that affects the brain (x).

In chronic cases, patients must make dietary and lifestyle changes. First, they should limit the amount of animal protein they consume—red meat, fish, cheese, eggs. Instead, doctors prefer that patients eat vegetable protein like soy. Sodium is also damaging to a compromised liver because it can cause fluid to accumulate in the body. Alcohol is also very dangerous because it can weaken the liver further (x). Patients should also control metabolic risk factors that can damage the liver, such as unhealthy weight, high blood pressure and diabetes (x).

In acute liver failure, the patient needs immediate medical treatment because the condition can become fatal very quickly. For example, IV fluids can help control the patient’s blood pressure and medications can eliminate toxins from the body because the liver is unable to do so. The doctor will also make sure the patient’s blood sugar does not drop, supplementing with glucose if it declines too much (x).

If other treatments fail, the patient may need a liver transplant, whether the condition is chronic or acute. The patient receives a new, healthy liver from a liver or deceased donor. The surgeon may replace the entire liver or just a portion of it because it may be able to grow back (x).

Making healthy lifestyle choices can help prevent organ damage. Patients can help reduce the risk by taking actions to protect themselves from the causes. For example (x):

Natural dietary supplements may be able to benefit overall health and prevent liver damage. However, they are not a cure for any medical condition. Always consult a doctor before starting a supplement regimen to avoid complications.

Dandelion root comes from the common dandelion, which has an array of nutrients and health benefits. For example, it can help reduce inflammation in the body from oxidative stress and possibly prevent chronic diseases. It also contains inulin, which maintains proper bile flow. The suggested serving for dandelion root extract powder is 1,000 mg (about ⅓ tsp) twice a day, or following a doctor’s instructions.

Alpha lipoic acid (ALA) is an organic compound that converts nutrients into energy. According to research, it is present in several different healthy foods and even has antioxidant properties to reduce inflammation in the body. ALA may also be able to help patients lose weight in order to manage the effects of liver damage. The recommended dosage for alpha lipoic acid (ALA) powder is 600 mg (about ¼ tsp) once or twice daily with meals. Do not take too much at once because it may interfere with natural ALA levels in the body.

Milk thistle is native to Europe and for more than 2,000 years people have used it for its healing properties. Specifically, it may address liver problems and possibly improve fatty liver disease. Research also states that milk thistle may be able to protect the body from hepatitis. All of these factors may be beneficial to patients at risk for liver failure. As a dietary supplement, take 250 mg (about ⅛ tsp) of milk thistle extract powder per day, after consulting a physician for approval.

Despite appearances, artichokes are actually part of the daisy family. They are loaded with antioxidants that can fight disease and signs of aging. Artichokes also help protect the liver. Research states that it may be able to help reduce fat deposits and inflammation in fatty liver disease. As a dietary supplement, take 700 mg of artichoke extract powder per day, if a physician approves the dosage.

Turmeric is a type of ginger and a very popular spice. One of its main components is curcumin. It has antioxidant properties that help neutralize free radicals that cause disease. Curcumin can also help reduce inflammation in the liver, which can help protect it from damage. As a dietary supplement, take no more than 1,000 mg of turmeric root extract powder a day with food or water. Roughly, 1,000 mg is about ½ tsp or a little more than ⅜ tsp. Consult a doctor before taking this product to ensure safety.

There are many factors that cause liver failure including cirrhosis, hepatitis viruses and acetaminophen overdose. Liver failure causes symptoms like diarrhea, vomiting blood, bloody stool, fatigue and loss of appetite. As the condition progresses, the liver becomes weaker, so symptoms become more serious. The patient experiences ascites, edema and abnormal bruising and bleeding.

Treatment options include dietary and lifestyle changes or a liver transplant. One way patients can prevent liver failure by protecting the body from damage is to make sure they receive adequate amounts of nutrients from food or supplements. However, it is always best to consult a doctor about liver failure and any other medical conditions. Lifestyle changes and supplements are not a cure, but research claims that they can help benefit overall health.