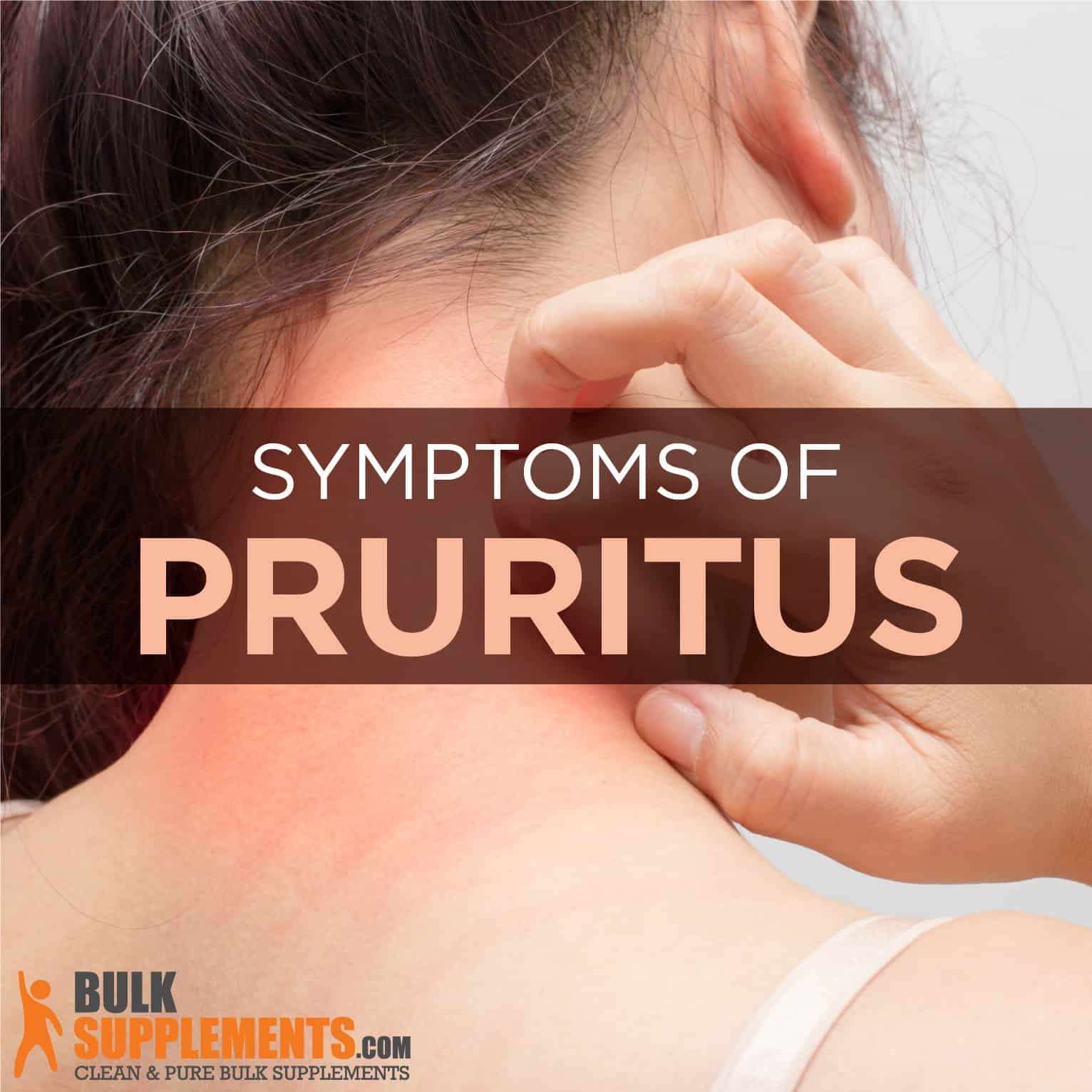 Pruritus is the feeling of incessant, uncontrollable itching. The exact causes of pruritus can be hard to pin down as it can affect anyone with any type of skin. Some people are more susceptible to the condition, such as those with seasonal allergies (hay fever, asthma and eczema), pregnant women, diabetics, people with HIV/ AIDS, and the elderly (x).

An itch is an uncomfortable sensation beneath the skin that causes the urge to scratch (x). At any given time, 8-9 percent of the population experience a bout of skin itchiness that lasts 2-3 weeks. It’s considered chronic, however, when it lasts longer than 6 weeks (x). Itching can be localized to certain areas of the body or generalized (x).

Several ailments are related to itchy skin, however, not all of them are skin disorders. These include psoriasis, internal diseases such as kidney failure or liver disease, nerve disorders such as diabetes or multiple sclerosis, psychiatric disorders like obsessive compulsive disorder, allergic reactions, and pregnancy (x). In some cases, pruritus can’t be fully cured but can be managed through things like medication, topical treatments and avoidance of skin irritants.

Pruritus is primarily characterized by extremely and uncontrollably dry skin, which leads to intense itchiness. Dry skin, medically known as xerosis, can be both a cause and a symptom of pruritus. When the skin becomes dry, it is an indication that it is about to become itchy (x).

If pruritus isn’t treated, extremely dry or itchy skin that is habitually scratched can actually begin to tear, forming lesions and open sores. The cracking and tearing of the skin can happen all over the body (x).

The uncontrollable itching caused by pruritus can lead to insomnia. If this is the case, consult a doctor for further advice (x).

Other symptoms of pruritus can include redness, bumps or spots, and leathery or scaly skin (x).

While the symptoms of pruritus are pretty straight-forward, the causes are not. Numerous factors can bring on the urge to scratch, ranging from external irritants to serious internal illness. Sometimes finding the underlying cause of pruritus requires extensive evaluation. Causes fall into four categories (x):

Some of the more common causes of persistent itching include:

Allergies are a common cause of pruritus and can stem from reactions to pollen, food, and certain substances. They cause the release of histamine and other chemicals in the body which can lead to intense itch (x).

Dry skin, or xerosis, can occur for several reasons including normal aging, inflammatory skin diseases, use of harsh soaps or detergents, dry weather conditions, and bathing too frequently. It can also be caused by conditions like diabetes (x).

Bug bites are fairly common and can result in redness and swelling around the area of the bite. Parasites like pinworms, lice or scabies are also common causes of persistent itching (x).

Psoriasis isn’t completely understood but is an immune-mediated condition where skin cells grow unusually fast. This results in lesions and rashes that can be itchy (x).

Measles, Chickenpox, and Other Viral Infections

Chickenpox and measles, two highly contagious viral infections usually associated with childhood, can cause temporary pruritus. Measles produces a body-wide rash that typically begins on the face and spreads downward toward the feet. Chickenpox, on the other hand, produces hundreds of itchy blisters that start on the chest and back and spread to other parts of the body. The itching associated with these viral infections lasts for a few days to a week and subsides when the person recovers (x, x). Other viruses, like HIV, shingles, and hepatitis C can also cause excessive itching (x, x).

About 20 percent of pregnant women experience pruritus. While in most cases it’s due to dry skin, there can be other more serious underlying causes. One of these causes is intrahepatic cholestasis of pregnancy (ICP) which results in a change in bile flow from the liver. This condition usually begins in the second or third trimester. The disruption in bile flow causes skin lesions and severe itching, especially at night. If not treated, ICP could cause harm to the developing fetus (x).

Liver conditions including cirrhosis, cholestasis, non-alcoholic fatty liver disease and drug-induced liver damage often cause pruritus. This type of itch usually gets worse at night. It can also be exacerbated by heat, hormonal changes, or contact with wool. Kidney failure can also be an underlying cause of pruritus (x).

Other causes of pruritus include exposure to harsh chemicals, certain medications, some cancers, thyroid dysfunction and psychiatric disorders (x).

Many different things can make someone itchy so no one treatment fits all situations. Identifying and addressing the underlying cause of pruritus not only can help alleviate the itch, it’s important for the maintenance of overall health and well-being. However, there are some palliative remedies that can help relieve some of the discomfort.

Studies show that skin products containing peppermint oil, when applied topically, can help relieve liver, kidney, and diabetic-related pruritus. Since pruritus during pregnancy can also be caused by liver dysfunction, research suggests topical peppermint oil can be useful in those cases as well (x, x). However, it’s important to note that experts currently disagree on the safety of the use of peppermint oil during the first trimester of pregnancy as it may cause uterine contractions (x). Peppermint contains large amounts of menthol which cools the skin and decreases itchiness by reducing the amount of histamine (x).

Topically applied products that include aloe vera is an age-old remedy for relieving dry skin, eczema and skin inflammation. Studies show it also aids in skin wound healing and the prevention of skin ulcers. Aloe hydrates skin as well as provides antimicrobial protection. Some people are allergic to aloe, however, which could cause a worsening of pruritus (x).

Skin moisturizers are an effective way to keep dry skin healthy. They help retain the skin’s ability to be an effective barrier against things that might make it itch such as allergens, irritants and pathogens. Research doesn’t identify one specific type of moisturizer that works best. However, ointments tend to provide more skin protection than lotions or gels. Products with added ingredients like corticosteroids, vitamin D3 or antihistimines might offer greater relief for itch depending on the cause. Use moisturizers 2-3 times daily for best results (x).

Light therapy (phototherapy) involves exposing the skin to UV light to reduce itchiness and inflammation. Studies show that it is especially useful in pruritus due to psoriasis and atopic dermatitis (x).

Itchy skin, also known as pruritus, can occur in varying degrees of severity. It may only last days or weeks or can be a chronic condition, lasting longer than 6 weeks. Since so many factors can lead to pruritus, finding the underlying cause is important for proper treatment. Allergies, viruses, parasites, autoimmune conditions, liver disease, and psychiatric disturbances can all make the skin feel itchy. However, dry skin is particularly common with pruritus. It may be what causes the itch in the first place or could result from constant scratching. As a result, no matter what is bringing about pruritus, protecting the skin through proper moisturization can help prevent and alleviate the uncomfortable itch. Additional topical treatments like peppermint oil and aloe vera might also provide relief. Finally, light therapy might also be useful for certain inflammatory skin conditions.