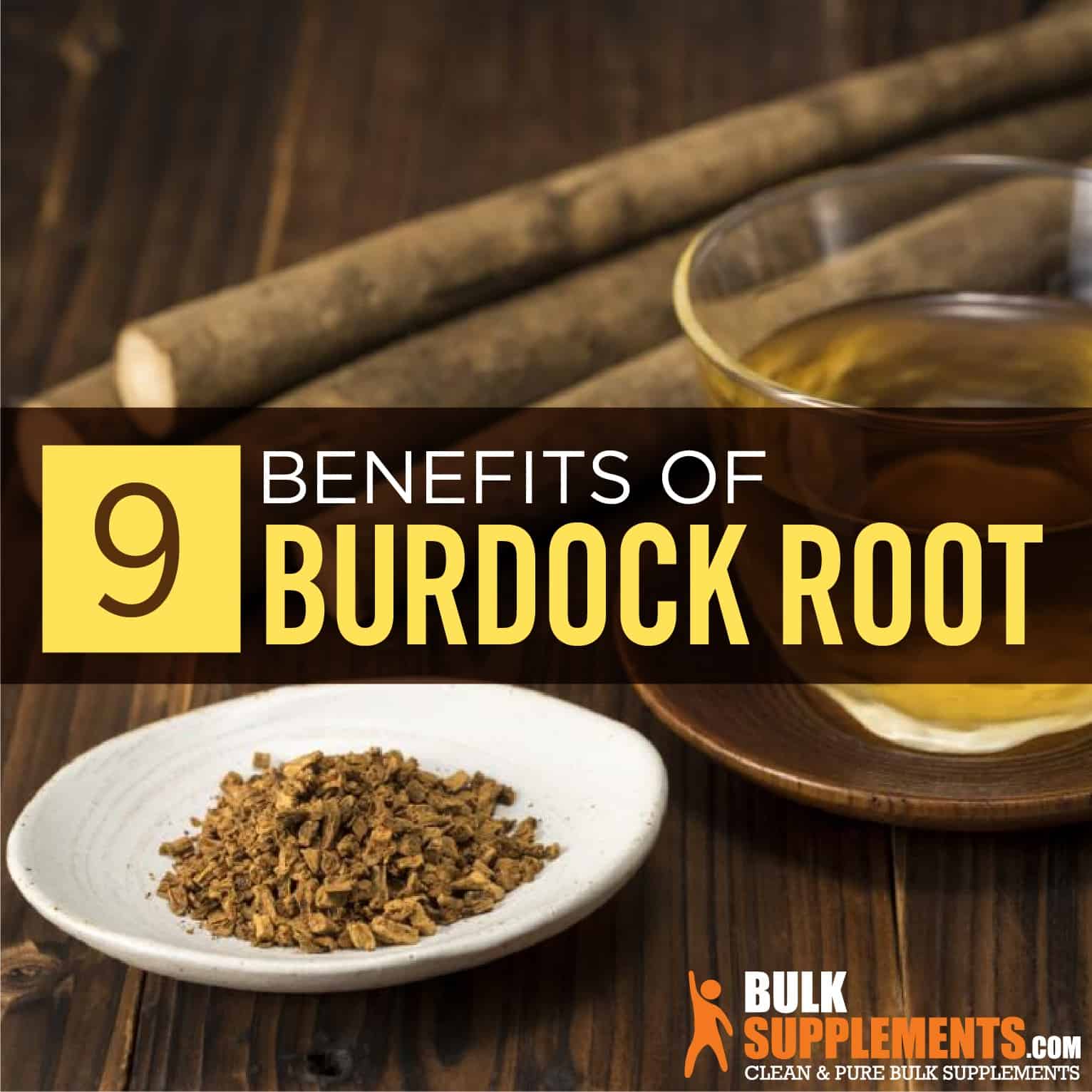 Ginger, ginseng, dong quai and maca all have one thing in common. What is it, exactly? Well, they’re all roots that offer a bevvy of nutritional benefits. But don’t forget about burdock root! This less known ancient root works wonders on your digestive, lymphatic and urinary systems while providing numerous other benefits.

What is Burdock Root Extract?

Burdock is a plant with large leaves that’s related to lettuce, dandelions, sunflowers and many others (x). It belongs to the daisy family and comes as a tea in many different tinctures, promising a wide variety of benefits.

Native to Europe and North Asia, burdock grows as a weed across the United States (x). In some areas of the world, people consume large quantities of burdock as a vegetable, just like potatoes, and it’s packed with essential fibers. Moreover, the dried seeds and leaves can produce burr oil, which serves various medicinal purposes.

Burdock is instantly recognizable for its giant Velcro-like seeds known as “burs,” which give the burdock plant its name. Burs are those pesky little pricklies you find stuck on your clothes over and over again after long hikes.

Burdock was first used in the medieval era, but it’s also popular in traditional Chinese medicine, and probably dates back much further (x). There are various ways to prepare burdock, either as an herbal medicine or food, making it highly valued worldwide as many different species are grown around the world.

Burdock root has played a major role in traditional medicine for hundreds of years. Researchers are currently designing clinical studies to evaluate its benefits. Some possible health benefits of burdock root are as follows.

Thanks to its caffeoylquinic acid derivatives, this plant has a hepatoprotective effect. In other words, it protects the liver as well as its cells (x). If you have liver injuries caused by drug or alcohol abuse, you can consume burdock root in controlled doses.

If you have weakened immunity, which is characterized by an enlarged spleen, make burdock root your friend! As burdock purifies blood, which your spleen filters, it indirectly keeps your spleen clean and protects it as well.

In a 2014 study, researchers discovered that burdock root might prevent deadly high blood sugar both in a sample of live tissue and a petri dish (x).

A 2011 study examines the effect of burdock root against some kinds of cancer — particularly those of the pancreas and liver (x). The anti-cancerous and anti-inflammatory properties of the extract are due to its caffeoylquinic acid derivatives (x). These act on the growing cancer cells directly and prevent them from metastasizing.

Diuretics work your kidneys and help the body eliminate excess fluid, mostly sodium and water. Being a natural diuretic, consuming burdock root will help your body increase urine output, helping you get rid of excess water. By increasing your urine output, burdock root helps to remove waste from your body and blood (x).

If you’ve got problems with fluid retention, talk to your doctor about consuming burdock root before turning to prescription medications.

Autoimmune conditions, free radical damage and other health disorders can cause long-term inflammation. Inflammation is associated with many medical disorders, including osteoarthritis.

According to one study, inulin, a dietary fiber extract of burdock, supports the growth of some friendly gut bacteria (x). That’s why burdock root can be used as a prebiotic — it helps your gut digest and absorb nutrients better.

For hundreds of years, traditional medicine practitioners have recommended the consumption of burdock root to fight off sore throats, colds and other infections.

Scientific research now sheds some light on how burdock can fight infections. Some research has shown that it contains antibacterial properties. It seems to be especially helpful for getting rid of biofilms, which are huge, sticky bacteria colonies (x) One good example of biofilm is the plaque that causes oral cavities. Biofilms grow all over the body.

Another common benefit of burdock is its aphrodisiac properties. In 2012, a study on male rats discovered that burdock root extract had an aphrodisiac outcome. The extract boosted sexual function and made male rats engage in sexual behavior more often (x).

More research is necessary in humans, but anecdotal evidence backs up this claim.

For ages, burdock root has helped treat skin conditions like eczema, psoriasis and acne. The antibacterial and anti-inflammatory effects of the plant can help resolve skin conditions when it’s topically applied.

One 2014 study even discovered that burdock root can help soothe topical burns (x).

The lymphatic system is simply that inner “drainage system” of the body, a collection of lymph nodes and blood vessels that move fluids from the body’s tissues to the blood and back.

As long as you take suggested serving sizes, burdock root supplements are safe to use. That said, there are several potential side effects of using the root:

If you’re allergic to plants in the daisy family, such as daisy, chamomile, aster, dandelion, chrysanthemum, lettuce and dahlia, you’re likely to be allergic to burdock, too. Consult your doctor if you plan on eating burdock despite the hypersensitivity (x).

Imagine what could happen to you if you have hot flashes, diarrhea or vomiting and you’re given burdock root extract soup? Ouch! That would dehydrate you as it’s a diuretic.

Burdock is known to be a uterine stimulant and oxytocic agent. According to one study, it induced labor in women who took it during pregnancy (x). It also increases the chances of premature labor.

If you’re pregnant, you should either avoid the root or take it under the strict supervision of your doctor. The same case applies if you’re planning to get pregnant.

Unfit for Children’s Use

There’s scant information out there about the root consumption in children. The plant has done more harm than good in kids under 18 years old. Consult your doctor before giving this supplement to your child.

Other Side Effects and Warnings

Burdock root is considered safe to consume, but you should buy only from reputable vendors and never pick it on your own in the wild. This plant looks like the highly toxic belladonna nightshade plant. The two normally grow together.

Only take small doses of burdock supplements in moderation. If you’re sensitive to foods rich in inulin (like leeks, asparagus or artichokes), avoid burdock or you could experience temporary bloating or gas.

Diabetics who take medications for lowering blood sugar should avoid the root as it can cause hypoglycemia (dangerously low blood sugar levels).

People with life-threatening or long-term health conditions should talk to their doctor before taking burdock root extract.

Burdock root comes as an herbal tincture, a crushed powder you can take in the form of a pill, a decoction (liquid made by boiling the herb) and as a tea.

Dosage and How to Take It

The right dose depends on a variety of factors, including your health, age and other health conditions.

As a nutritional supplement, take ½ teaspoon (1,200 milligrams) of burdock root extract powder once or twice a day, or as instructed by your physician. It’s best to take the supplement with meals.

It’s important to stick to recommended dosages with natural products. Make sure to follow relevant instructions on the product packaging and consult your doctor or pharmacist or other healthcare specialist before using this supplement.

Burdock root is a vegetable abounding with fiber. If you need more fiber, especially if you have diabetes, consider including it in your diet or consuming it as a supplement.

Burdock root can also help treat some skin conditions, including minor skin irritation and acne. Apply a tincture or paste directly to the area affected.

Burdock root is quite a powerhouse in terms of its nutrition profile. The USDA reports that it provides energy, fiber, carbohydrates and protein.

When it comes to minerals, it contains potassium, calcium, magnesium, selenium and phosphorous. It’s also an excellent source of vitamins, including vitamin C, vitamin E, vitamin K, B vitamins and choline (x).

Burdock is a biennial medicinal herb that originates from Europe and Northern Asia, though it now also grows in the United States. The burdock plant has very long, deep roots that are either brown or blackish on the outside.

Its extract has been used in holistic medicine for centuries to treat a variety of health conditions. Traditionally, the most common uses were as a digestive aid and diuretic.

You can eat the root, make tea, cook it or take it in the form of a supplement. Its supplements include capsules, dried burdock powder, burdock root oil and burdock root tincture.

You can safely consume the root in moderation and safely drink a cup of its tea daily. When it comes to burdock supplements, please follow your physician’s directions and the directions on the product package.

Research into the health benefits of burdock is inconclusive, so you shouldn’t use it as an alternative to medical treatment. However, taking burdock root supplements is a healthy way to improve your overall health and treat some common ailments.