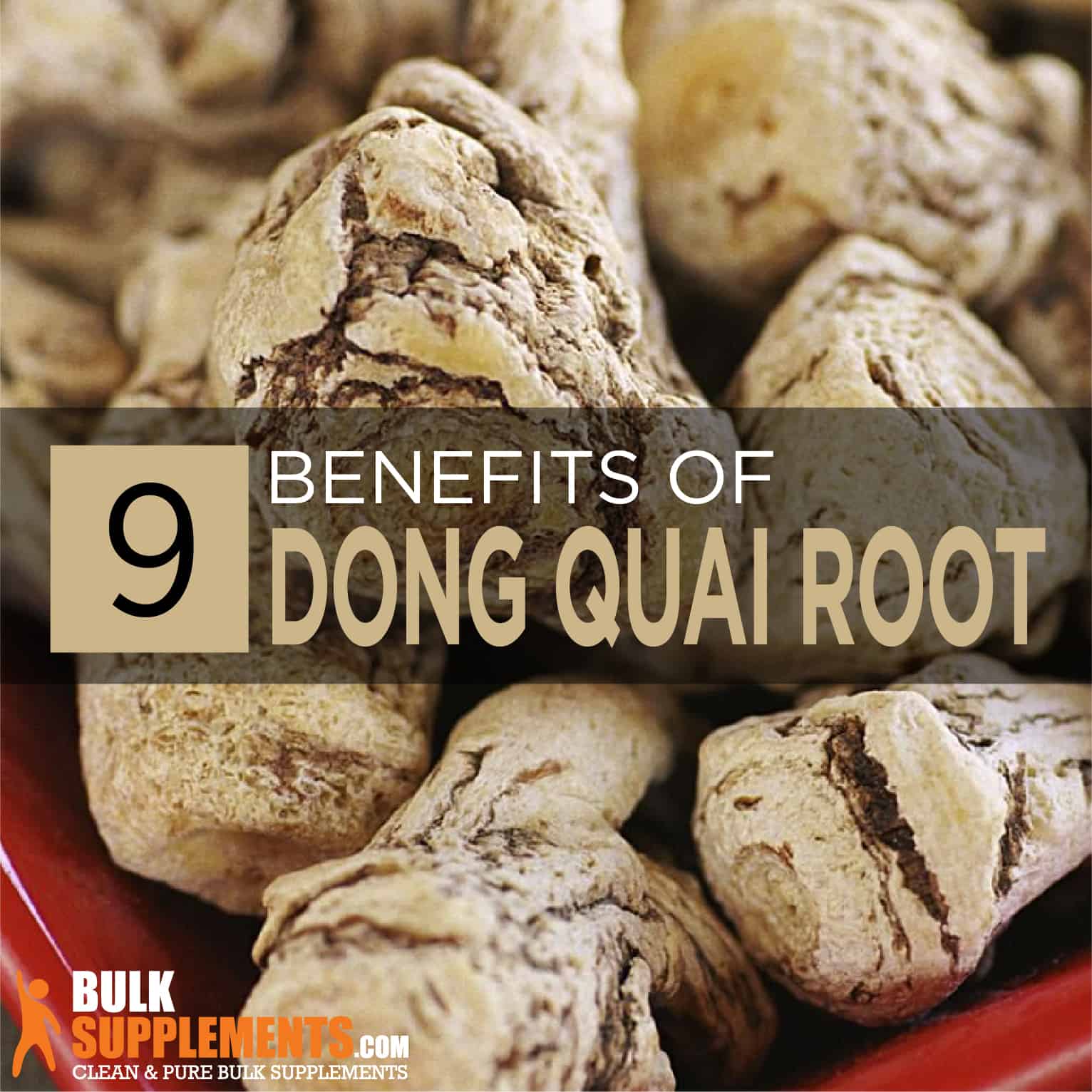 What is Dong Quai Extract?

Dong quai is an herb that belongs to the plant family of Apiaceae, which also features celery, carrots, coriander and parsley. It is scientifically known as Angelica Sinensis and is native to the cold and damp mountainous regions of China, Korea and Japan (x). It is a handsome perennial plant with a smooth purple stem, small white umbrella-like fragrant flowers and winged fruit. The most important part of the plant is its thick, yellow-brown roots, which hold the most beneficial chemical components of the plant. The roots are harvested into extracts of tablets, tinctures and powder forms.

The dong quai plant contains more than 70 potent chemical compounds like niacin, coumarins, flavonoids and vitamins A, C and E (x). Together, they provide antioxidant, anti-inflammatory, cardioprotective and immune-stimulating effects.

The herb earned its moniker of ‘female ginseng’ due to its many benefits that may promote female health. It has long been used for the treatment of gynecological and hormonal issues in women (x). Additionally, it has been used for therapeutic reasons for millennia and is popular in traditional Chinese medicine.

Dong quai has a long history of use among a number of different cultures. Some of its benefits include:

Research shows dong quai has an estrogenic effect and may help with menstrual problems like cramping, irregular or delayed flows and premenstrual syndrome. It also promotes hormonal balance and improves blood circulation (x).

The antispasmodic properties of dong quai help alleviate mood swings, cramping and general discomfort that stems from menstruation and menopause. The European Medicine Agency carried out an extensive analysis of dong quai, which shows that its antispasmodic properties help suppress cramping and muscle spasms in the pelvic region (x). In fact, it was effective in regulating menstruation in 39 percent of patients. It also helps to replenish blood lost during menstruation.

From the age of 40, women experience a natural decrease in hormone production (menopause). Side effects of this phenomenon include mood swings, hair loss, night sweats and, of course, hot flushes. Some women experiencing these symptoms turn to hormone replacement therapy for relief. This medication provides similar synthetic hormones as those found in birth control pills, which can have their own set of side effects. However, an Italian study suggests that one can relieve symptoms of menopause with the use of dong quai to regulate hormone levels (x).

Evidence suggests dong quai might be helpful for hot flushes in post-menopausal women when used in combination with other herbs. According to findings from a study published in the Clinical and Experimental Obstetrics and Gynecology, a 12-week study on 55 post-menopausal women experiencing hot flushes showed that the group who took tablets containing dong quai and chamomile showed improvements in their hot flush symptoms (x).

Another three-month study on pre- and post-menopausal women published in Gynecological Endocrinology showed that a combination of dong quai and several other herbs like milk thistle, red clover and black cohosh helped to soothe hot flushes and reduce sleep disturbances (x).

The estrogen hormone helps regulate bone formation and protects bone cells from damage. A 2014 study revealed that dong quai has anti-osteoporotic effects. Osteoporosis may affect both menopausal and post-menopausal women due a reduction in estrogen levels that occur during that period (x). Moreover, a preliminary study published in PLoS One shows that compounds extracted from dong quai show potential for treating osteoarthritis (x).

Bone density and regeneration gradually decline as we age, resulting in a reduction of bone formation and overall bone loss. Dong quai helps prevent osteoporosis by increasing bone density and has been used in combination with Chinese herbal prescriptions to reduce bone loss that causes osteoporosis (x). It contributes towards cartilage health and promotes the regeneration of cartilage and bone tissues (x). A 2002 in-vitro study shows that dong quai stimulated bone remodeling (where new bones replace old ones) by enhancing the secretion of protein and the synthesis of collagen (x).

Inflammation is the body’s immune response for fighting off foreign organisms; however, chronic inflammation is an underlying factor in diseases such as cancer, rheumatism and heart disease. Studies suggest that dong quai has anti-inflammatory compounds that reduce inflammation and the risk of chronic disease. Research shows that extracts of the herb significantly reduce inflammation caused by spinal cord injury (x).

Triggers the Production of Antioxidant

The main components of dong quai that have anti-inflammatory effects are complex sugar, ferulic acid and ligustilide. The plant acts like NSAID pain killers by blocking key enzymes that trigger inflammation in the body (x). Free radicals break down and damage the building blocks of cells causing tissue damage. Dong quai, however, triggers the production of antioxidant enzymes and compounds that help prevent this damage. Dong quai is used in combination with sophora extract to help reduce inflammation (x).

Dong quai helps reduce and regulate blood sugar levels. A 2015 study published in the Food and Function journal revealed that laboratory mice experienced a decrease in blood sugar levels and insulin resistance after taking the extract for a month (x).

Insulin assists in transporting sugar from the bloodstream to the cells. High insulin levels over a long period can result in insulin resistance, which leads to a build-up in sugar level. Research shows that polysaccharides from the root of dong quai help to reduce insulin resistance and fasting blood glucose (FBG) in test subjects (x). Another study shows that rats on a high-fat diet experienced a reduction in their blood sugar levels after the administration of dong quai extract (x).

Acts as a Blood Tonic

Dong quai is rich in nutrients like biotin, vitamin B12 and folic acid, which can help tone the blood and nourish the body. It has a long history of use as a blood-boosting agent in traditional Chinese medicine formulas. Its blood-boosting ability can prove useful in replenishing the volume of your blood supply and red blood cell count after an injury or surgery. It helps generate more blood cells and acts as a blood thinner and purifier, preventing blood clots.

Blood stasis is a blood disorder that results in the pooling of the blood that can develop into severe conditions like stroke, heart failure and heart disease (x). Free radicals in the blood can activate the release of arachidonic acid that converts to a molecule that triggers platelet clumping. Research has shown that an herbal mix containing dong quai was able to scavenge free radicals and prevent platelet clumping (x).

Dong quai contains many active components that decrease the production of fibrinogen — a protein that clots blood (x). This herb and several of its components have proven to have anti-blood-clotting compounds that improve blood circulation. A Chinese formula containing dong quai eases Raynaud’s syndrome — a condition in which the blood vessel tightens in response to cold temperature, leading to numbness, color change and poor blood circulation in the fingers (x).

Dong quai promotes digestive health by a gastroprotective effect by reducing the overproduction of stomach acid. Too much acid in the digestive tract can lead to inflammation of the gastrointestinal tract. If one does not treat this chronic inflammation, it can lead to peptic ulcers — a condition where the stomach and small intestine develop small tears. Dong quai can help prevent the formation of these lesions. Studies show that the herb can protect the layer of mucus covering the digestive tract from damage.

Side Effects of Dong Quai Extract

Some side effects of dong quai include:

If you notice any of these symptoms, discontinue its use immediately and contact your doctor.

Pregnant women should avoid taking dong quai because it affects the uterine muscles. This can lead to contractions that increase the possibility of a miscarriage. Breastfeeding women, those taking birth control medication or planning on becoming pregnant should also avoid taking the herb.

Don’t take dong quai in conjunction with Warfarin or other blood-thinning medications. It contains coumarin — an active ingredient in blood thinners that may increase the risk of bleeding. As a result, those who experience bleeding disorders or women with excessive menstrual bleeding should avoid dong quai.

People with hormone-sensitive conditions like uterine fibroid, ovarian or uterine cancer and endometriosis should not use it due to its estrogen-like effect. Moreover, it could trigger an allergic reaction for those who are allergic to plants from the Apiaceae family, i.e., carrots, coriander and celery.

Those on medications like ibuprofen, aspirin, heparin and dalteparin, hormone replacement therapy and birth control pills should avoid it as well because it can interfere with their medication. Do not combine it with garlic, ginger or gingko, as it can increase the risk of bleeding and bruising.

If you have breast or prostate cancer, you should avoid dong quai. This also goes for people with severe diarrhea, abdominal bloating or hemorrhagic disease.

People about to undergo surgery should stop taking it at least two weeks prior to the procedure. Those suffering from protein deficiency shouldn’t take dong quai as it can lead to blood clots. Taking a high dose can sometimes result in skin reactions like inflammation and rashes after being exposed to direct sunlight.

Dong quai root extract is commonly used as an oral supplement in the form of powder. The recommended daily dose for the powder form is 1,000 mg once or twice per day.

Dong quai has been used in traditional Chinese medicine for thousands of years to treat a range of health conditions. Its primary benefit is helping with issues relating to female reproductive health. This has earned it the moniker ‘female ginseng’. It also promotes digestive, heart and bone health, increases blood circulation and regulates blood sugar levels. It eases symptoms of depression and inflammatory markers, and its rich nutrient contents make it an excellent aphrodisiac. Pregnant women, breastfeeding mothers, those with bleeding disorders, breast cancer, colon cancer and hormone-sensitive conditions, however, should not take dong quai.