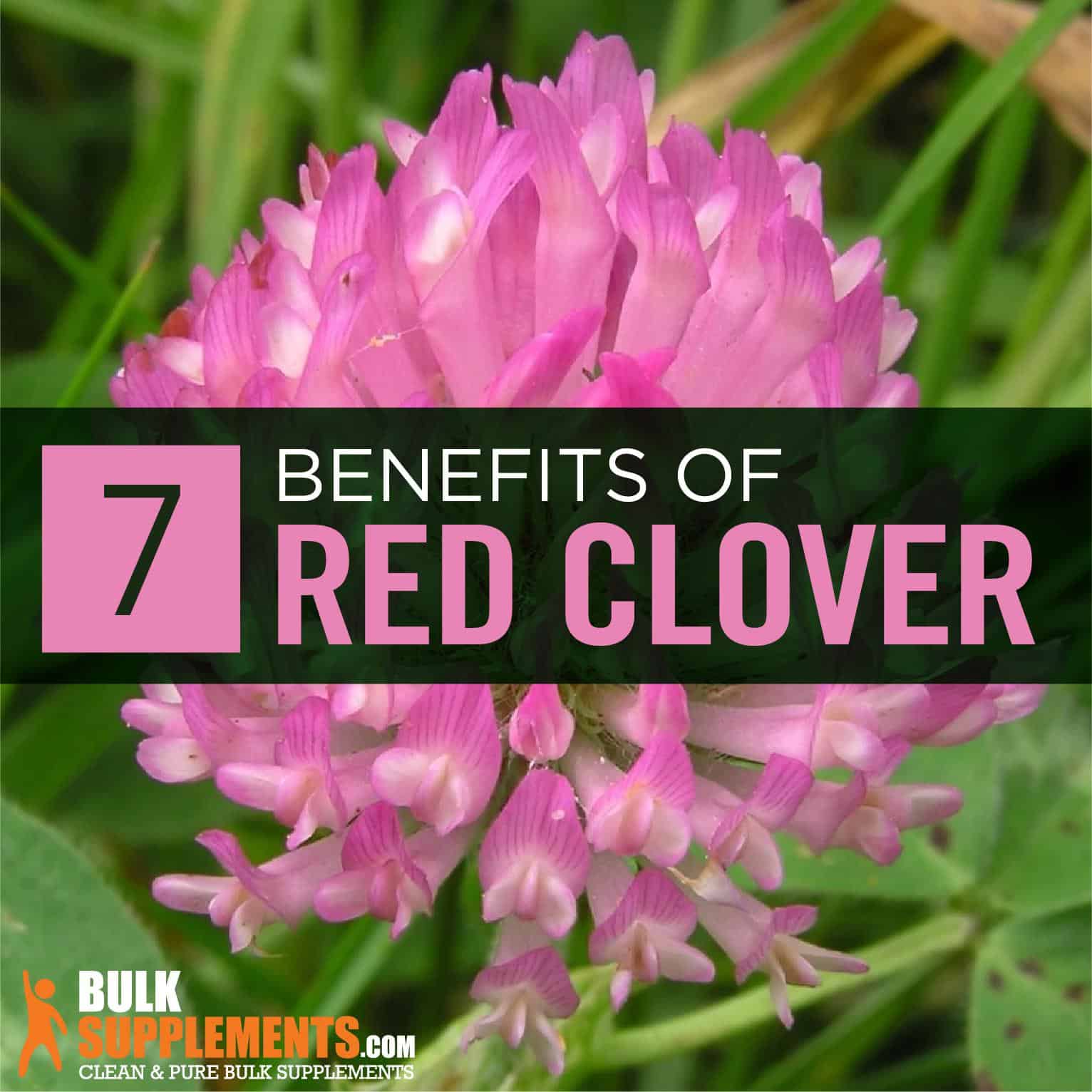 What is Red Clover Extract?

Four-leaf clovers are supposed to bring good luck, and the same holds true for red clover.

Red clover is a highly-prized herbal supplement due to its ability to alleviate symptoms associated with menopause. It can possibly increase bone density, and it may even reduce your risk of high cholesterol and high blood pressure, both of which can lead to cardiovascular problems (x).

Red clover’s list of benefits doesn’t stop there. It contains several antioxidants that boost immunity and reduce inflammation. It also helps to soothe coughs and cold symptoms, as well as skin conditions such as eczema and psoriasis.

This herb has been used through the ages to bring hormones into balance and keep mucus in check. Homemade remedies include crushing the flowers into an ointment; boiling them to use on skin injuries including burns, fungal infections and even for gout and diseases of the eye. A tea made from red clover flowers has been used to treat many illnesses, from measles to asthma to whooping cough (x).

Red clover contains a biologically identical natural source of estrogen along with several antioxidants. Besides helping to relieve symptoms associated with menopause, it may also help prevent diabetes and even cancer (x).

Heart disease is the number one killer of older Americans, as well as people in many other countries. Red clover has been shown to reduce the risk of atherosclerosis (hardening of the arteries). It protects arteries by increasing circulation and reducing high cholesterol, which in turn may help prevent coronary heart disease. Isoflavones are believed to be the key ingredient, raising HDL (‘good’) cholesterol, while preventing blood clots and increasing flexibility in the arteries. Improved blood flow means more nutrients can get to and nourish individual cells (x).

Bone mass peaks between the age of 25 and 30, and bone loss starts for most women around 40 (x). Some 54 million Americans have some form of bone loss. Osteoporosis is the loss and weakening of bones, and the most common type is due to hormone deficiency, which occurs during menopause.

While men lose bone at a slower rate, they’re still at risk for developing the disease. And once they do develop osteoporosis, they’re more likely to break a bone. Some research shows that a diet high in phytoestrogens can help lower the chances of developing osteoporosis. Also, some studies suggest that, in addition to reducing the risk of osteoporosis, red clover can help bones heal (x).

Women of any age who have low estrogen levels or low bone density can benefit from a red clover supplement. This demographic includes women who are underweight or those who suffer from a condition called female athlete triad (which has the unfortunate acronym of FAT), an energy deficiency that occurs from eating too little while exercising too much.

While there’s still much to study about isoflavones like red clover in the quest for a cancer cure, they appear to slow or stop cancer cells from growing and dividing and may even be able to cause abnormal cells to self-destruct. The types of cancer isoflavones seem to work best against are those that are affected by changing hormones, such as cancers of the breast, uterus and prostate. But because estrogen’s effect on breast cancer is still not totally understood, those at risk for breast cancer or who have a history with the disease are advised to avoid red clover (x).

Estrogen levels plummet during menopause, leading to all sorts of unpleasant side effects, including hot flashes, difficulty sleeping, weight gain, bone loss including osteoporosis, joint inflammation and cardiovascular conditions. Estimates suggest that some 60-70 percent of menopausal and post-menopausal women suffer from these conditions but get little to no relief from the standard hormone replacement treatment (HRT) (x).

Due to complications and unwanted side effects such as an increased risk of breast cancer and heart problems from HRT, interest in natural alternatives is on the rise. Results from studies of red clover aren’t fully conclusive. However, many study participants reported improvements without any negative side effects (x). Study participants reported better mood, increased libido and better sleep accordingly.

Studies further demonstrate that the isoflavones in red clover may help to alleviate symptoms of skin conditions like eczema and psoriasis, as well as slow the signs of aging skin. It is believed that red clover’s influence over estrogen produces the majority of the effects (x).

Estrogen elevates the amount of collagen in the skin, helping to thicken and hydrate it. In one study, participants who took a red clover extract, along with other isoflavones daily for 14 weeks, saw positive effects on collagen and elastin fibers. This resulted in a more uniform thickness and smoother skin (x).

Red clover may also offer protection against skin cancer. Studies have shown that it reduces pore size and other signs of aging. It has been used to treat burns and wounds, improve moisture, thickness, elasticity and other dermatological merits (x).

Red clover has the potential ability to cleanse the body from within, loosen phlegm, and calm lung spasms, which improves sleep and reduces discomfort and stress during illnesses. Red clover is sometimes used to treat and even prevent a wide variety of respiratory infections, including everything from the common cold to asthma, bronchitis and whooping cough. Because it helps to flush the system of excess fluid and mucus, it’s most helpful when taken at the first sign of any illness (x).

Hair loss can seriously impact a person’s self-esteem. Although we tend to perceive hair loss as more of a man’s problem, both men and women are likely to suffer from thinning hair and/or hair loss, particularly after age 50. Red clover may be able to help. The same study mentioned earlier on menopausal women also revealed a marked improvement in hair and scalp health when using red clover (x).

Red clover is safe for most people to use. However, some may experience mild side effects, including rashes, muscle aches and headaches.

Because it mimics estrogen, caution is recommended to those who currently have or are at risk for breast and endometrial cancer. Women who are pregnant or nursing should always consult with a physician before adding any supplement to their health regimens (x).

Because red clover thins the blood, those with blood-clotting abnormalities should probably not take this supplement.

Red clover is available in various forms, including powder form. When supplementing with red clover extract powder, take 1,500 mg daily with food or water. If a physician suggests another dosage, it is best to follow their instructions.

Generally considered safe, red clover can provide a host of benefits from stronger bones and improved cardiovascular health to reduced risk of infection, relief from menopause symptoms and reduced inflammation. While there are some potential risks for people who currently have or are at risk for breast cancer, red clover can be a great addition to your health regimen.