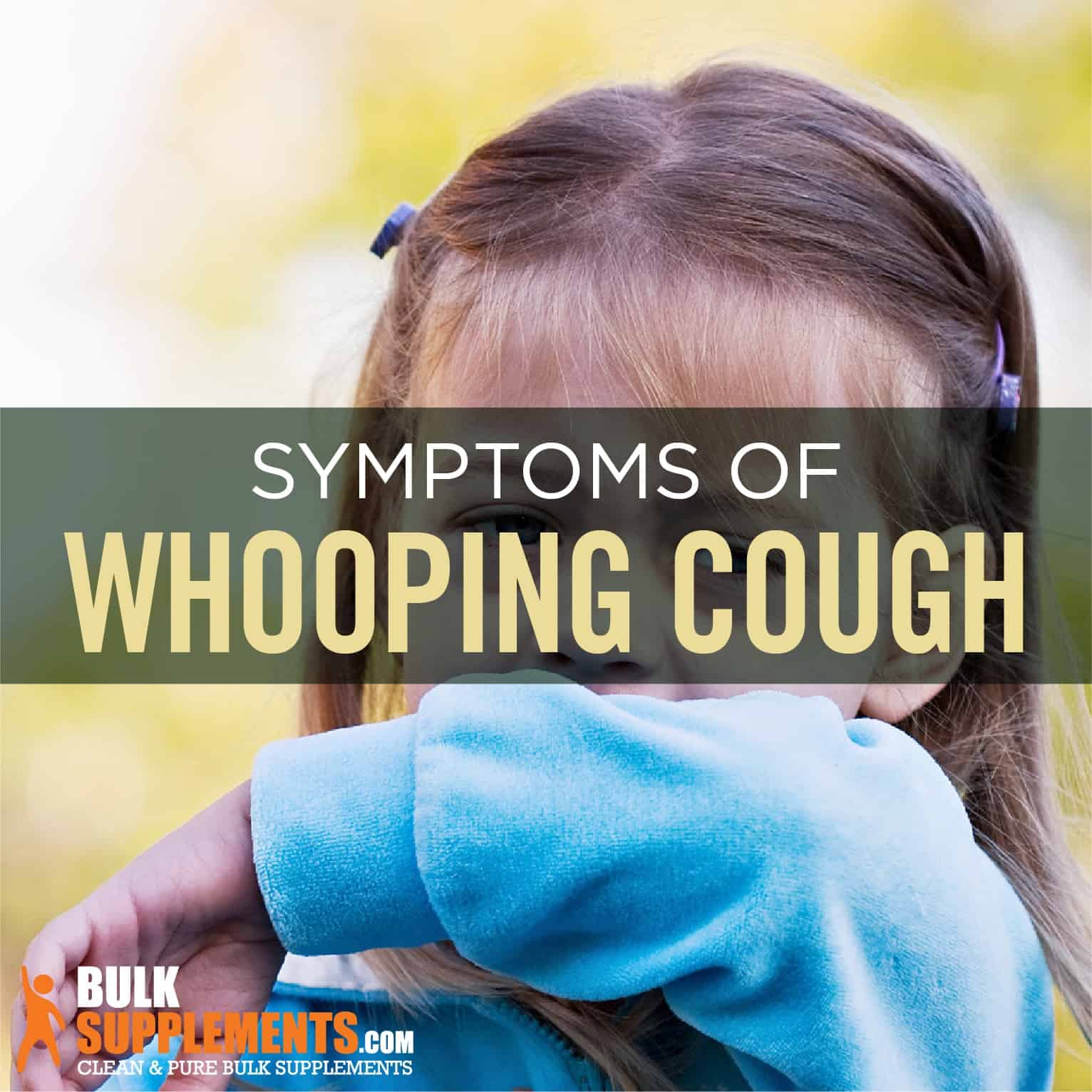 What is Whooping Cough?

Whooping cough, also known as pertussis, is an acute and highly contagious bacterial respiratory infection caused by Bordetella pertussis. It causes violent, uncontrollable coughing that sometimes makes it difficult for you to breathe. A distinctive and high-pitched “whoop” sound usually punctuates the coughing spasms when you inhale. Luckily, whooping cough is preventable. However, even though there is a vaccine, doctors struggle to control the disease. Large outbreaks in the U.S. have occurred, and it’s wise to keep abreast of the information through your doctor. (x)

Before the pertussis vaccine, the medical industry considered whooping cough a standard childhood disease. (x) Whooping cough is more common in infants under six months and young children between 11 and 18. The Center for Disease Control and Prevention (CDC) reported that before the vaccine, infection was a significant cause of childhood deaths in the U.S. (x) Today, whooping cough primarily affects children who have not received all of their vaccinations (debatable) and teenagers and adults with a weakened immune system. Immunity also fades, and people can still contract the disease even if vaccinated. (x)

The first documented case of the whooping cause was during the 15th century. A Persian physician, Bahaodowle Razi, reported two epidemics — one in Harat and Rey, known as old Persia. He described the disease as Sorfe-ie-Am, which means public cough. In 1578, a French scientist in Paris, Guillaume d Baillou, reported the same symptoms. It wasn’t until 1906 when two men, Jules Jean Baptiste Vincent Bordet and his brother-in-law Octave Gengou, isolated the causing agent for the first time — Bordetella pertussis. (x)

As previously mentioned, bacteria called Bordetella pertussis causes whooping cough. It only thrives and multiplies in humans, as they are the only known reservoir for the bacteria. It attaches to the respiratory cells and causes inflammation. (x) The disease spreads through coughing, sneezing or coming into contact with contaminated surfaces. (x) It is highly contagious. Even people vaccinated can contract the disease if they come into contact with the bacteria. (x) (x)

The disease is recurring because immunity wears off over time, and people become susceptible to getting it again as they get older. Contracting the disease or getting the vaccination does not guarantee permanent immunity. That is the argument about vaccinations. They don’t necessarily work. (x)

Because the vaccine does not guarantee immunity, risk factors make people more likely to contract the infection. Adults who have not received the whooping cough vaccine, people with a weakened immune system and pregnant women are at a higher risk of developing whooping cough. If you come into contact with someone infected, you also put yourself at risk, even if vaccinated. (x) (x) (x) (x)

Once you become infected with whooping cough, it can take seven to 10 days before symptoms can appear. Sometimes it can last for more extended periods, up to three weeks. The symptoms appear in three phases. (x) (x)

The first stage is the most contagious (x) and lasts for seven to 10 days. The infection usually begins with cold-like symptoms:

In this stage, which usually begins after a week or two, the symptoms worsen. This stage varies from one to 10 weeks. The symptoms include: (x) (x) (x) (x)

A thick mucus membrane accumulates in the airways, causing violent and uncontrollable coughing fits called paroxysmal cough. The cough is usually severe and prolonged. But coughing fits are more frequent at night.

As the inflammation worsens, the airways narrow, making it harder to breathe. It also causes a “whoop” sound as the individual tries to get breath back after a bout of coughing. Rapid coughing causes air to leave the lungs, and when there is no air in the lungs, you force your body to inhale with a whooping sound.

Extreme coughing fits can cause an individual to vomit, especially children. The cough produces large amounts of mucus that trigger vomiting.

This symptom is common in infants. Sometimes whooping cough can cause the face to turn purple briefly, blue or red during a coughing fit from low oxygen levels in the blood. (x)

People infected with whooping cough are still contagious at this stage. Symptoms in the paroxysmal stage may last anywhere from one to six weeks.

In the final phase of whooping cough, the cough gradually improves. Coughing fits occur less often and usually disappear in two to three weeks. Starting about two or three weeks after the cough, individuals are no longer contagious, but they are at risk of developing other infections, which may slow down the recovery process. Sometimes adults with whooping cough may cough that won’t go away. (x) (x)

Most infants do not develop a paroxysmal cough or the distinct “whoop” sound. Infants will probably have recurring episodes where they vomit after coughing, temporarily stop breathing, and their faces turn blue from lack of oxygen. (x)

Adults infected with whooping cough may develop secondary complications, although they are less severe than infants. (x) (x) (x)

The violent coughing fits can also lead to fractured ribs and fainting. Adults are also at risk for seizures and hypoxemia when the blood doesn’t receive enough oxygen.

Children and infants are at a higher risk of suffering from severe complications, mainly babies in the first six months of life because their immune systems are still developing: (x)

The most common complication in children is pneumonia, an infection in the lungs. It also causes the most deaths related to whooping cough. Sometimes whooping cough can be life-threatening in children. Approximately 90 percent of them were infants less than a year old. (x) (x) (x)

It’s challenging to diagnose whooping cough in the initial phase because its symptoms mimic other common respiratory illnesses — bronchitis, a cold or the flu — until the paroxysm cough develops. (x)

A doctor takes a suction sample from the nose or throat in this test and then examines it for evidence of whooping cough causing bacteria, Bordetella pertussis. (x)

A doctor may suggest a chest X-ray to check for fluid or inflammation in the lungs. (x)

If treatment begins early, the prognosis will be less severe, especially for infants. They usually remain hospitalized for treatment, including IV fluids, if they cannot keep food down. Treatment depends on the patient’s age and how long they have had the infection. However, the bacteria leave the body after three weeks, even if the patient still has symptoms. At this point, treatment will not resolve the illness. (x) (x) (x)

Antibiotics are the primary treatment option since whooping cough is a bacterial infection. They are most effective during the initial stages of whooping cough. They can also prevent it from spreading. (x)

Older children and adult patients usually receive treatment at home. To help rid themselves of the illness, patients should rest and drink fluids to avoid dehydration. Eating smaller meals can help reduce vomiting after coughing fits. Keeping the hands clean, covering the mouth to cough, and avoiding contact with other people can help prevent transmission. (x) Other effective measures to keep the germs from spreading are having them use a separate bathroom, staying in their room (isolation), sanitizing their room every day, and using disposable dinnerware, which is thrown away after use. (x)

Talk with your healthcare provider before starting any new supplement. As supplements help the body prevent illness and get well from disease, the following supplements may help you stay well and recover from whooping cough. Some to consider include:

Praised for its ability to boost the immune system by enabling the body to break down toxin accumulation in the body, ginger root also possesses antibacterial properties. (x) (x) It can help lower the risk of infection. As a dietary supplement, take 1,000 mg once daily. Take it with at least eight ounces of water to avoid heartburn.

An active ingredient of turmeric, curcumin has antimicrobial potential against several microorganisms. (x) Take one dose of up to 1,000 mg of curcumin extract powder daily with water or a meal.

NAC derives from the amino acid L-cysteine, which helps treat respiratory conditions. It can also help detoxify the body, as well as boost immunity. (x) Take the powder in serving sizes of 600 mg up to three times per day.

Inhaling peppermint oil can help unclog the sinuses and relieve a scratchy throat. It has menthol in it and has antibacterial properties. It can also act as an expectorant by helping lower the severity of coughing attacks. (x) You can mix it with other oils and rub them on the back of the neck.

Where to Buy Supplements for Whooping Cough?

You can purchase these supplements for Whooping Cough at BulkSupplements.com. The company is an industry-leading manufacturer and distributor of pure dietary supplements.

Are you interested in trying any of these supplements mentioned in this article as a possible solution to helping you with Whooping Cough? Contact BulkSupplements.com to place an order today.

Whooping cough is a highly contagious disease caused by a bacterium called Bordetella pertussis. When an individual with whooping cough sneezes or coughs, the bacteria spread into the air.

If you have whooping cough, you may experience intense and rapid coughing bouts, usually accompanied by a “whoop” sound when the person takes a deep breath. Although it is preventable with a vaccine, many people still contract it because immunity can fade.

If someone in your house has a whooping cough, it’s vital to keep them from spreading the germ. Isolation and other protocols are necessary to prevent others in your home from catching the disease.

Symptoms are much more severe in infants, and they are more likely to suffer complications. Whooping cough-related deaths mainly occur in unvaccinated infants less than a year old. Antibiotics treat whooping cough, but natural treatments like peppermint oil, ginger, curcumin and N-acetylcysteine can help boost the immune system and treat the infection. However, small children or infants should not use these supplements.