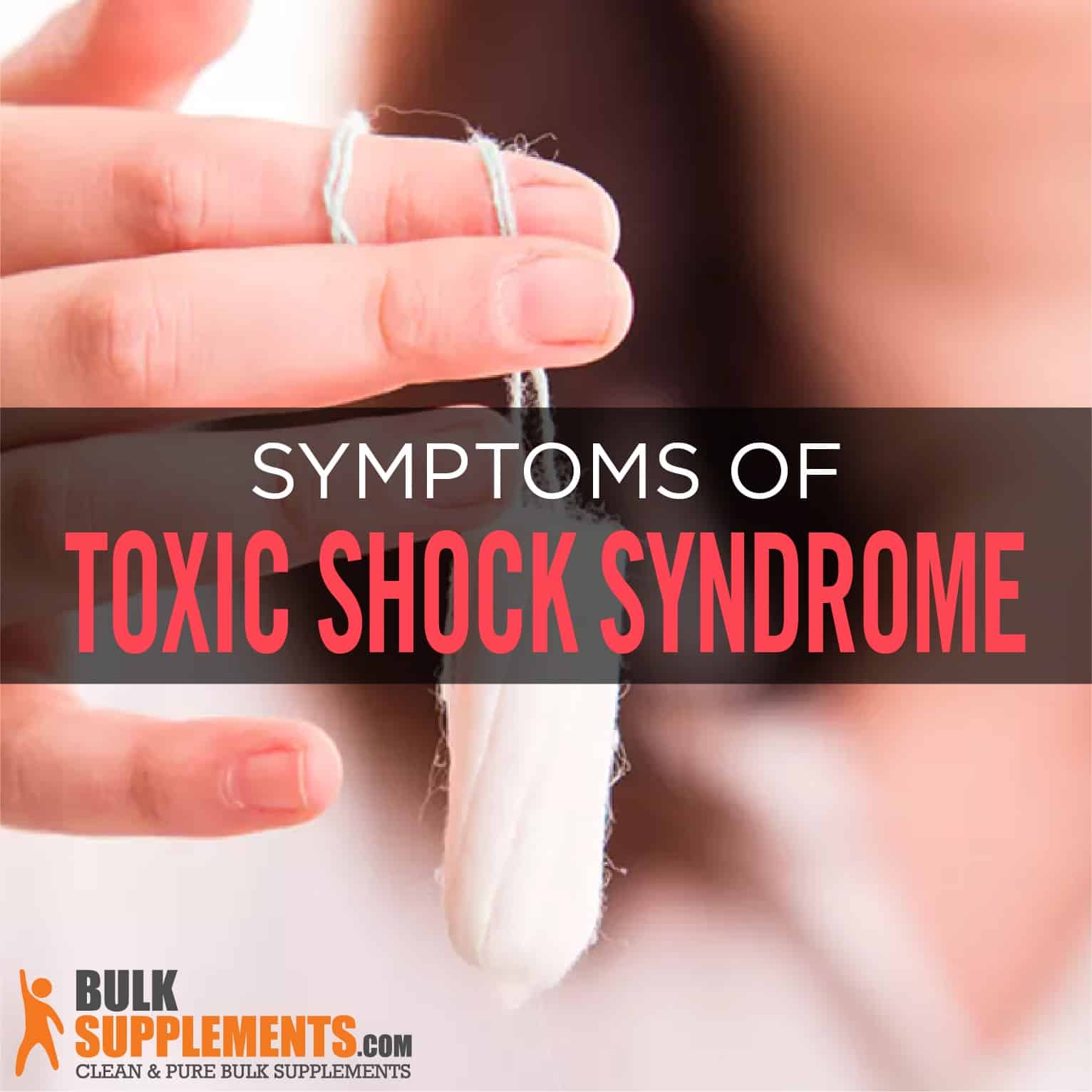 Toxic shock syndrome (TSS) is a rare but potentially fatal complication caused by infections (x). It usually results from Staphylococcus aureus or Streptococcus pyogenes bacteria, which produce toxins that can cause major organ failures and even death if left untreated (x).

Doctors first noted the condition in a group of children in 1978. They then identified it as a health problem affecting women of menstruating age. But reports show that 50 percent of reported cases are non-menstrual (x). Non-menstruating women, men and children exposed to the bacteria can contract the condition as well. Research even links TSS to prosthetic use (x).

TSS syndromes vary from one person to another. Most often, the symptoms appear suddenly and progress quickly, about two days after infection. Even though it’s rare, TSS can be life-threatening, so it is important to detect symptoms quickly (x, x).

Later, the symptoms can progress further to include higher fever, a red sunburn-like rash, confusion, headache, nausea, diarrhea, seizures, low blood pressure, muscle aches and abdominal pain. Depending on the type of bacteria, TSS patients can have different symptoms.

Symptoms of staphylococcal TSS are caused by Staphylococcus aureus bacteria. These symptoms can include vomiting, diarrhea, myalgia (aches and pains) (x), elevated creatine kinase in the blood (x) and thrombocytopenia (low platelet count) (x). Confusion, red, peeling rashes on the palms and soles, inflammation in the eyes and dizziness may also occur (x, x).

TSS forms when the Staphylococcus aureus bacteria release toxins in the body. The bacteria already exists harmlessly in the body, but certain conditions can lead to toxic shock syndrome (x).

First, the bacteria needs a conducive environment to grow and release toxins into the blood, such as:

The condition may manifest when these devices are inserted for a long time or if a menstrual sponge leaves pieces in the vagina. Super-absorbent tampons can also dry out the vagina and increase the risk of tearing. These microscopic cuts and tears can rupture tiny blood vessels, allowing bacteria to enter easily (x).

S. aureus is part of the body’s normal bacteria and normally doesn’t cause infection. It isn’t considered contagious because most people develop antibodies to fight infections. But if the body doesn’t develop antibodies, it can get infected through direct contact with someone else (x).

Do Tampons Cause TSS?

There is no scientific evidence supporting the claim that tampon use directly causes toxic shock syndrome. In most cases, the bacteria already exist in infected women’s vaginas and tampons just promote growth (x).

TSS is more common in women, but men and children can also get TSS. The bacteria already lives harmlessly on different parts of the body—on the nose, groin, skin and the armpit. However, those who use tampons when menstruating have an increased risk of getting TSS than those who don’t.

In 1980, 63 women died of TSS, but as a result of a certain tampon brand. Since then, manufacturers have pulled that brand from the market and cases related to menstruation have decreased significantly (x). However, women who use these devices are still at risk (x).

TSS toxins can also penetrate the blood from other types of S. aureus infections (x):

Contrary to Staphylococcus bacteria, Streptococcus infection grows as a result of another infection. Chickenpox and bacterial cellulitis can lead to Streptococcus TSS (x).

Fifteen percent of TSS cases involve infected wounds and childbirth (x). Specifically, C. sordellii infections are most likely after childbirth — whether it results in a live birth, abortion or miscarriage (x). Women carry this bacteria naturally and it normally does not cause infection, but after abortion, it colonizes faster.

Certain risk factors can increase the risk of toxic shock syndrome (x, x, x). These risk factors include recent surgery, the use of super-absorbent tampons during menstruation, skin infections, surgical wounds, burns, immunosuppression (x), nasal packing or medical gauze to treat nose bleeds (x) and contraceptive sponges or diaphragms. Women who have had TSS are at a greater risk of developing it a second time (x).

TSS is a medical emergency and requires hospitalization to eliminate the source of infection and support the bodily systems that the infection may have affected. To diagnose TSS, a doctor will perform several procedures to test for bacteria (x, x):

TSS is usually treatable if it is detected quickly (x). A doctor will develop a treatment plan based on age, medical criteria, tolerance for medication or procedures and how far the symptoms have spread. Treatment methods may include (x):

If TSS is severe, patients may require surgery to remove infected and dead tissues.

TSS is a medical emergency, so home remedies aren’t recommended for treatment. However, there are some natural remedies that can help prevent TSS in the first place.

Though the chemicals in pads and tampons are not dangerous, organic materials are a better alternative (x). Try to be conservative when it comes to the duration of your tampon usage; manufacturers set an eight-hour time limit for usage. Be cautious sleeping with a tampon because you could exceed this time limit (x). Always wash your hands before and after you insert the tampon to reduce the risk of bacteria and use the lowest absorbency.

Reports show that tampon manufacturers in the U.S have stopped using the material first associated with toxic shock syndrome (x). However, previous TSS patients should still avoid tampons because there is a chance of recurrence (x).

Take proper care of skin wounds — cuts, incisions, burns or scrapes — to promote optimal healing and prevent TSS bacteria from entering. Keep the area surrounding the wound clean and keep the wound itself well dressed with a bandage. Pay extra attention to protect any skin wounds in high infection risk areas, such as hospitals or nursing homes. Inform your health practitioner immediately if any wound, incision or cut displays signs of infection like oozing, redness or swelling.

However, TSS is curable if it is treated early. Treatment options include intravenous antibiotics and fluids, blood transfusions and immunoglobulin therapy. TSS can also be prevented naturally with proper wound care, menstruation maintenance and optimal vitamin D levels.