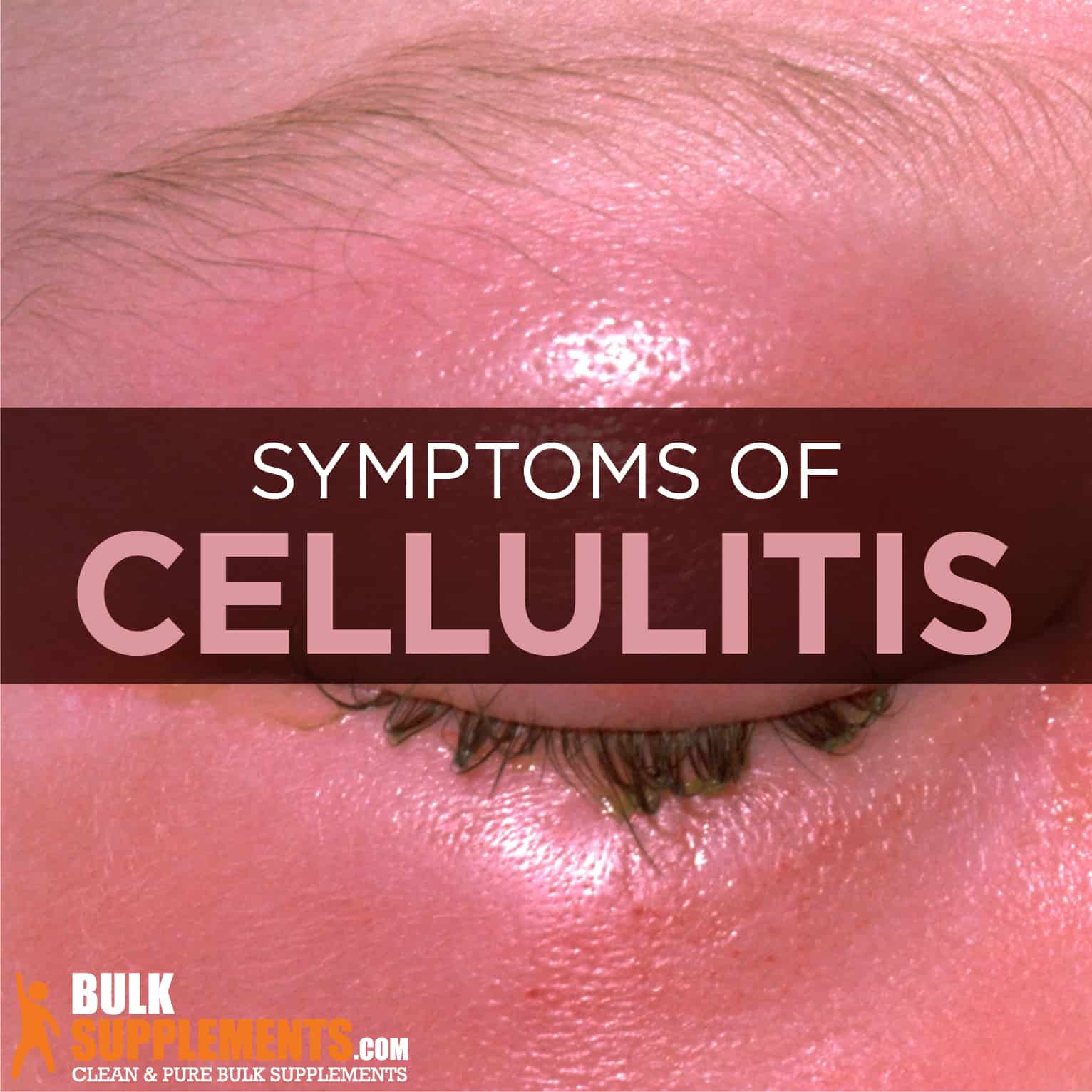 Cellulitis is defined as an acute infection of the dermis and subcutaneous tissues of the skin. While there are a large number of skin infections, cellulitis will typically follow a distinct set of presentation characteristics, distinguishing it from other common diseases (x).

When thinking about cellulitis vs. erysipelas, it is important to understand that cellulitis affects deeper levels of the skin than does erysipelas. While they are both infections of the skin and may be challenging to distinguish initially, they will both have different clinical presentations that a doctor will normally be able to distinguish between using just the naked eye (x).

Like with most types of infection, there will be the presence of redness across the infected area. At first this redness may look more generalized, as if it is just a red appearance under the surface of the skin, similar to being flush after a workout. However, as the infection progresses this will intensify in appearance and affect a larger area of the skin. The infection will not have distinct borders as are present with erysipelas (x).

In response to the infection, the area affected by the disease will frequently swell as part of the immune response. Drainage from the area will be limited, which will also contribute to the swelling of tissues. This will be especially evident in appendages and digits (x).

As with all conditions that illicit a systemic inflammatory response, cellulitis will cause a fever as the body heats up in efforts to kill the foreign cells. While this fever may not be present in the very acute stages of infection, it will become much more prominent as the disease progresses (x).

In some more extreme cases, fluid-filled blisters, large or small, may appear within the area of the infection. They may be somewhat blotchy in appearance and likely will have palpable sacs of fluid present (x).

Other Forms of Cellulitis and Symptoms

Cellulitis on most areas of the skin will have a presentation with most of the symptoms listed above. However, there are some forms of cellulitis that take on a more distinct set of clinical symptoms, distinguishing it from the norm (x).

This is an infection of the orbital tissue behind the orbital septum. The symptoms of orbital cellulitis are commonly swelling of the eyelid, redness of the eyelid and surrounding tissue, as well as discharge and discoloration. There is both pain and difficulty with eye movement. Additionally, it is likely that vision will suffer. The eyelid normally becomes noticeably swollen, projecting outwards (x).

This is an infection of the eyelid and the surrounding tissue anterior to the orbital septum. The symptoms of preseptal cellulitis are commonly tenderness of the eyelid, swelling, warmth, redness or discoloration. Additionally, eye movement may prove painful with a degree of vision difficulty. While swelling will be present, it is usually not as prominent as in orbital cellulitis (x).

This is an infection of the tissue between the palatine tonsil and the pharyngeal muscles. The symptoms are commonly the gradual onset of a sore throat, dysphagia, fever, otalgia and an increase in swelling of the affected tonsil (x).

Bacterial Entry Into the Body

Bacterial entry is widely considered to be the most common cause of cellulitis. The infection will commonly manifest in the area of an open wound, current or recent. This is especially common for athletes who are working out with an open wound as the moist environment and increase in body temperature will create a near perfect environment for bacteria to grow (x).

Most commonly, the infection is caused by the S. aureus bacteria or by a member of the streptococcal family. While both are bacterial in nature, distinguishing the exact cause through use of a careful evaluation and culture may help with outlining the best course of treatment (x).

As animal bites may cause an open wound, they carry the risk for causing cellulitis. Animals are subject to a wide array of infections that can be transferred to humans and bites can additionally allow for open wounds that can be penetrated by bacterial organisms (x).

In addition to these traditional causes of cellulitis, many associations between cellulitis and diabetes exist. While the exact etiology of this is not completely understood, the lack of an adequate blood supply, as well as neuropathy, has commonly been associated with cellulitis of the foot. Those with diabetes are at a higher risk for skin infections than the general population (x).

When considering cellulitis treatment guidelines, there is often a standard for using oral antibiotics as with the majority of bacterial infections. There are many antibiotics available for use, but those used specifically for treatment should be carefully considered and decided by a healthcare provider, especially for those who have antibiotic resistance of some degree.

In addition to the textbook oral antibiotics option, several home remedies for cellulitis have been shown to be effective in treating the condition, delivering satisfactory results for infection cessation. In eastern medicine, there has been a growing focus on using alternatives to antibiotics when possible. This keeps the body from developing a high degree of resistance to antibiotic medication, allowing for it to be more effective when treating bacterial diseases that do not have alternative treatment plans available.

Garlic is regarded as one of the most powerful natural agents to combat bacterial and viral infections. Because of the strong properties it contains, garlic has been shown to overcome antibacterial resistant strains (x).

When using garlic extract powder to combat cellulitis, it is best to either consume several cloves daily while the infection is present or crush the cloves and heat in a solution, such as coconut oil, and apply it directly to the skin. The latter option is not ideal for those who have skin sensitivity as it may cause added irritation.

Turmeric is a powerful antibiotic and antiseptic agent that also has anti-inflammatory properties. Because of its versatility, turmeric has the potential to treat cellulitis as an infection while simultaneously combating its associated symptoms, such as swelling and inflammation (x).

Turmeric can be consumed through a variety of means for medicinal purposes. It can be combined with boiled milk and drank daily, consumed daily in curcumin powder or made into a paste with honey and oil that is applied to the affected area directly on a daily basis.

Coconut contains fatty acids that are proven to be strong antibacterial agents against a number of strains, especially the S. aureus bacterial strain that so commonly causes cellulitis. When used for medicinal purposes, coconut is often applied as oil directly to the area of infection. It should be left on for several hours then washed off, done multiple times daily until the condition resolves (x).

Additional home remedy options for treating cellulitis include tea tree oil, calendula, oil of oregano, manuka honey, fenugreek powder, Echinacea extract powder, and activated charcoal. As many of these home remedies have been established throughout the years, supplements that extract their most powerful antibacterial agents have become available for use. This allows for ease with direct application, ensuring all potential benefits are concentrated on fighting the infection (x).

While home remedies may not have an exact dosage outline, it is important to note recommendations for antibiotic use. If dosage guidelines are not followed carefully, there is a number of side effects possible, ranging from heartburn to antibiotic resistance.

While cellulitis is often mistaken for erysipelas, a healthcare provider will often be able to distinguish the difference with a visual examination. A culture of the infected tissue will help determine the best course of treatment moving forward, whether this is using oral antibiotics or natural supplements proven to combat infectious bacterial properties. Before deciding what option is best for you, make sure that you do your research about the different home remedy options available through supplements and discuss these options with your physician to make sure there are no potentially harmful side effects based on existing conditions or sensitivities you may have.