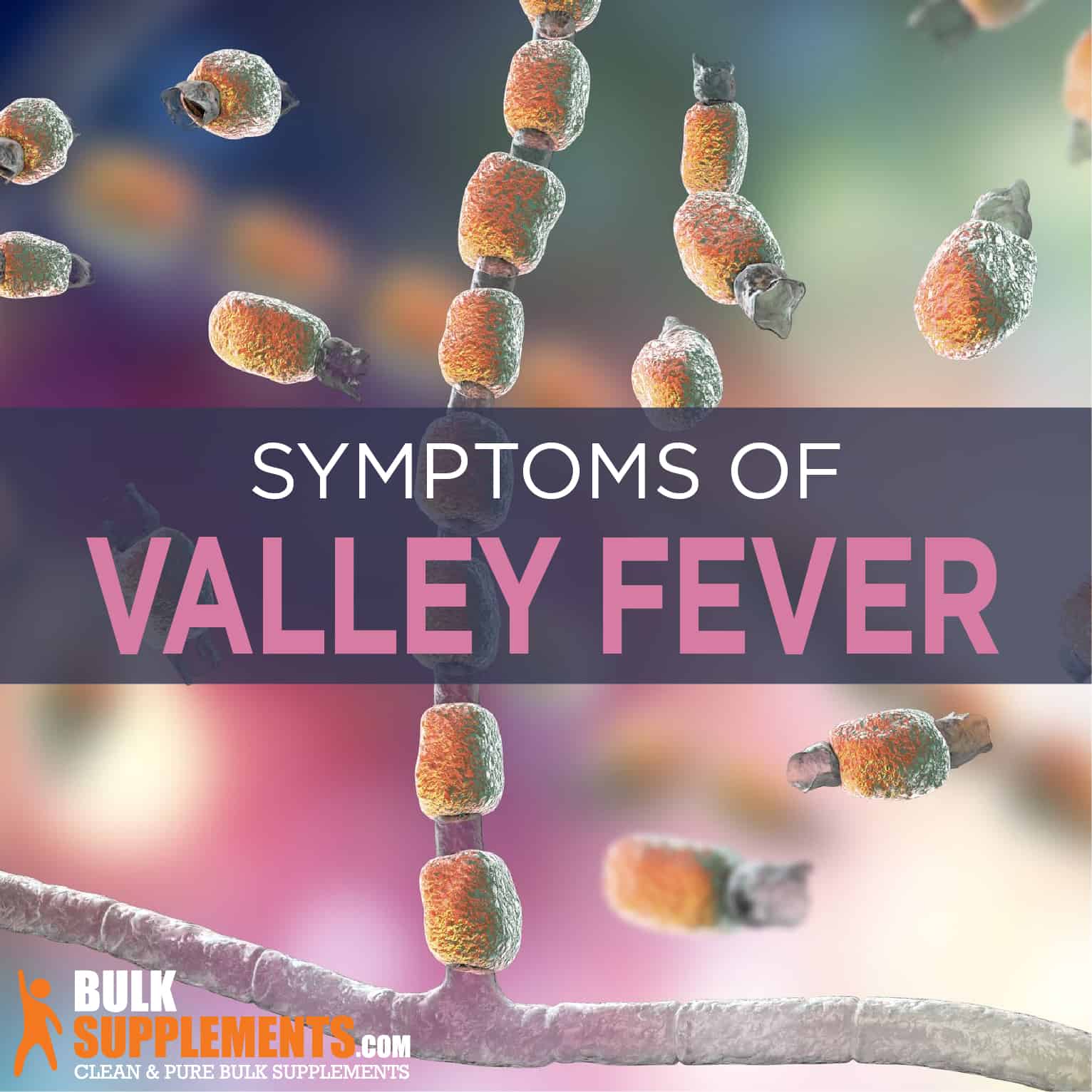 What is Valley Fever?

Valley fever (coccidioidomycosis) is a fungal lung illness caused by Coccidioides. The fungus lives in the soils of the southwestern U.S., parts of Mexico, Central America and even in South America.

Valley fever occurs when one breathes in the microscopic spores of Coccidioides fungus in the air, but most people who inhale the spores don’t fall ill. In general, people who come down with coccidioidomycosis get better without medication within weeks or months, but some will need antifungal medicines.

Some groups of people are more likely to become severely ill with valley fever (x). In areas where Coccidioides is common, it’s hard to avoid exposure to it. However, those who are at greater risk for severe valley fever should try to not breathe in huge amounts of dust when in these areas.

In areas where the fungus thrives, valley fever rates are generally highest among persons aged 60 and over (x).

Valley fever isn’t contagious. In other words, an infected individual won’t transmit the infection to other people.

Mild valley fever cases usually resolve without treatment, and most persons infected with Coccidioides have few to no symptoms at all. In more serious cases, doctors prescribe antifungal drugs to treat the original infection.

There are three forms of valley fever:

This is characterized by mild symptoms. Some people won’t have any symptoms, and only become aware of the infection when their blood or skin test is positive.

According to the University of Arizona, more than 60 percent of people with valley fever either don’t have symptoms or have very mild flu-like symptoms only and never see a doctor (x).

People who are generally healthy will usually recover fully within 6 months. Those who have severe symptoms may need up to 12 months to fully recover. Joint pains and fatigue can carry on for longer periods.

Signs and symptoms may appear within 1-3 weeks of exposure.

These symptoms include chills, cough and mild or severe chest pain. Fever, fatigue, headaches and muscle and joint aches may occur as well, as can shortness of breath and night sweats.

A skin rash may occur. This usually includes spotty red lumps on lower legs, which can be painful. They eventually turn brown and are called erythema nodosum. Also, the rash can appear on the chest, back or arms. More rarely, it can cause blisters.

In rare cases, people who have acute valley fever don’t fully recover, and the infection worsens into a chronic type of pneumonia. This more commonly affects those with a weak immune system. The severity of these symptoms may fluctuate over time.

Coughing, chest pains and nodules in the lungs can occur with this type of valley fever.

During an infection it is not unusual for a person to present with a fever, as raising the body temperature is one way the body fights infection. Valley fever usually only produces a slight fever.

Disseminated valley fever is the most severe type of valley fever, which occurs when the illness spreads to other body parts through the bloodstream.

It may affect several organs — especially the liver, skin, bones, heart, brain and meninges. Signs and symptoms differ, depending on the body parts affected. Without treatment, disseminated valley fever can lead to death (x).

Fever and headaches are common symptoms when a person is fighting an infection.

Lesions in the spinal cord and other bones are common. Skull lesions, which may be painful, as well as skin lesions, are also possible.

Meningitis, or inflammation in the spinal cord and membranes near the brain, is a typical symptom of disseminated valley fever.

These fungi species grow in the soil as mold. In this state, the fungus may survive for ages in harsh conditions, including heat, cold or droughts. It forms long filaments that come off and become airborne as spores. Inhaling the spores can cause infection.

Coccidioides immitis and Coccidioides posadasii live in the alkaline soil of deserts, like those in Arizona, Texas, New Mexico, Nevada, San Joaquin Valley in California and northwestern Mexico. Valley fever is also common in parts of Central and South America.

The infection can affect anyone regardless of age, but it most commonly affects people aged 60 and over (x).

Those who have undergone an organ transplant, have HIV/AIDS or are taking medicines such as TNF-inhibitors or corticosteroids are at greater risk of valley fever. Pregnant women and those with diabetes are also at higher risk.

Though the exact cause is unknown, certain ethnicities and racial backgrounds, in this case those who are black or Filipino, seem to be more at risk of developing severe or fatal valley syndrome (x).

Severe infection occurs in less than 5 percent of patients and usually develops in those who have a weak immune system. Fluids and bed rest is often the best treatment for otherwise healthy people — the same treatment used for the flu and colds. Still, doctors closely monitor persons with valley fever (x).

Antifungal medications keep the fungus in check, but sometimes they don’t kill it and relapses can occur. For many, one valley fever episode brings lifetime immunity, but the infection may be reactivated. Re-infection can also occur if one’s immune system is severely weakened.

People who visit or live in areas known for valley fever should take reasonable precautions, especially in the summer when the risk of infection is greatest. They should consider staying indoors during dust storms, wearing a mask, keeping windows and doors tightly closed and moistening soil before digging.

The following dietary supplements may help treat various symptoms of valley fever. Make sure to follow intake requirements and your doctor’s recommendations.

Take 250 mg of milk thistle supplement daily, or according to your physician’s suggestions. You can take it with or without meals.

Vitamin C is an antioxidant that helps protect your cells from free radical damage. It is also needed to produce collagen, a protein that helps wounds heal. Plus, it boosts iron absorption from plant-based food sources and supports immune system function to protect you from disease (x).

Taking white willow bark can help decrease the tension caused by headache-related pain. Its chemical content salicin works like Aspirin’s acetylsalicylic acid. It can take longer to feel the effects of white willow bark, but they may last longer than Aspirin.

Niacin (vitamin B3) helps the body convert carbohydrates, proteins and fats into energy (x). In addition, it supports liver and gland function.

Take 625 mg of flush-free niacin daily, or as suggested by your doctor since individual needs can vary.

Berberine HCL is used to support heart health and maintain the levels of good cholesterol.

The extra hydrochloride in the supplement is meant to aid the digestion and absorption process. Berberine may also be applied to the skin topically.

Take 500 mg of berberine HCL powder twice a day, or as suggested by a doctor. Don’t use the supplement for over three months.

Perhaps the most popular use of grapefruit seed extract is treating digestive problems and killing fungal pathogens in the digestive tract.

One human trial showed that intake of grapefruit seed extract significantly improved symptoms in people with IBS and eczema (x).

The recommended daily dose of grapefruit seed extract is 500 to 1,000 mg, taken up to three times a day, based on your intended effect.

Some herbal and natural cough drops and syrups contain marshmallow root. The supplement coats the esophagus and may help soothe it.

The results of a number of small studies have shown that herbal cough treatments containing marshmallow root may have this effect. In fact, one study revealed that marshmallow root syrup or lozenges helped relieve a dry cough (x).

Marshmallow root extract powder should be taken in a dose of 1,200 mg once or twice a day.

Astragalus extract powder should be taken in a dose of 1,300 mg daily with food, or as suggested by your doctor.

Valley fever, a fungal lung illness caused by Coccidioides posadaii or Coccidioides immitis, is also called coccidioidomycosis. It’s endemic to various parts of southwestern U.S., from southern California to Texas and parts of Northern Mexico, as well as Central and South America.

Coccidioides is the fungus that causes valley fever. It’s found in the soils of dry areas in the Western Hemisphere. One gets valley fever by inhaling the spores of the Coccidioides fungus. Once the fungus is in the lungs, it multiplies and causes infection.

Since valley fever affects the lungs, it causes flu-like symptoms. The symptoms may include fatigue, night sweats or fever, headache, shortness of breath or cough, joint pain and muscle aches and skin rash.

Valley fever infections often cause no symptoms. Less serious flu-like symptoms may go away without treatment within a few weeks to months. In severe infections, symptoms can last longer.

In many valley fever cases, no treatment is required because symptoms clear on their own. Patients with more severe infections may require antifungal medicines to cure the illness. Doctors normally prescribe antifungal meds for 3-6 months. In certain severe cases, patients require long-term antifungal treatment or hospitalization.