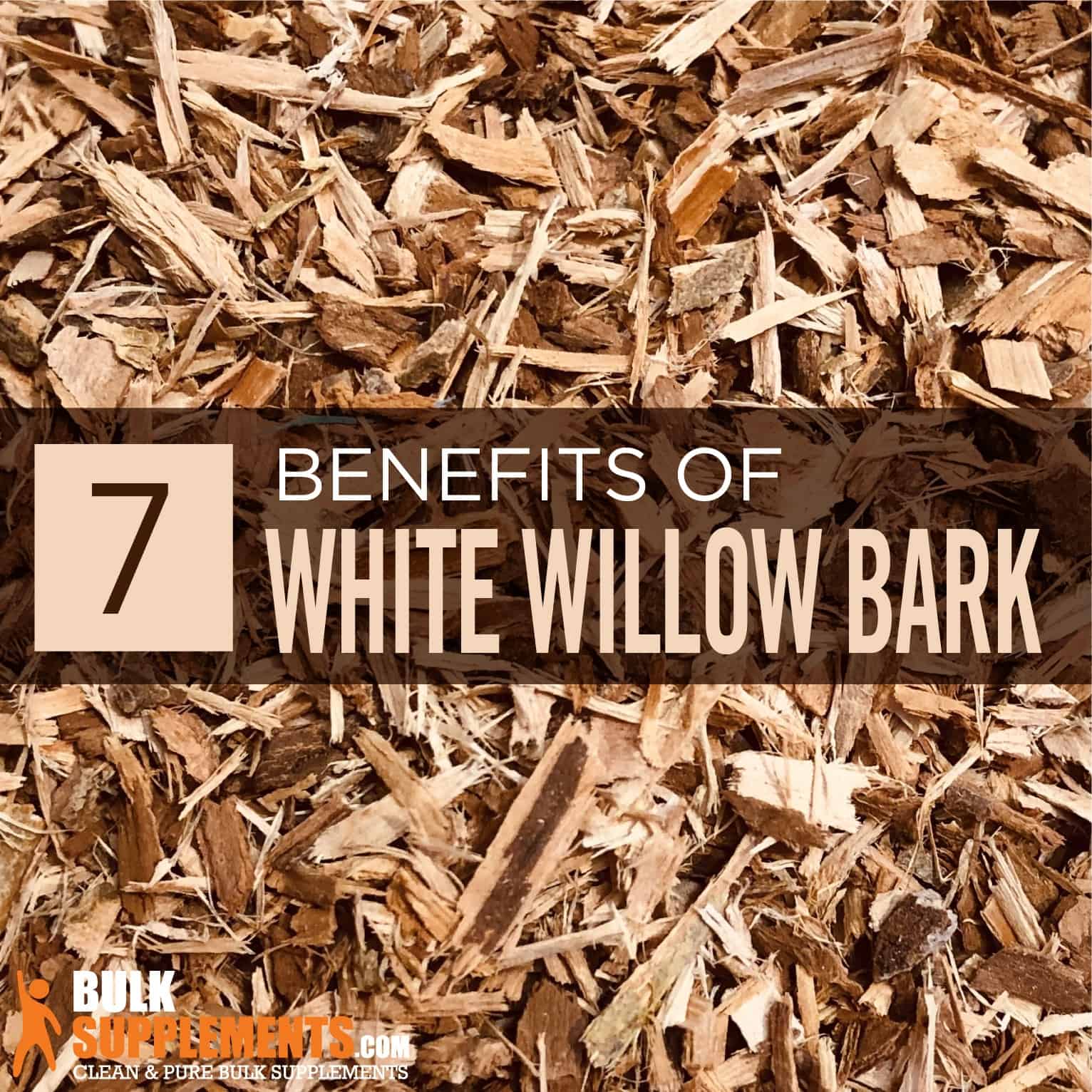 What Is White Willow Bark Extract?

White willow bark has been used for thousands of years as a medicinal herb. In fact, it dates back centuries in Europe and China, where people used it to relieve pain, fight inflammation and reduce fever. White willows have an inner and outer bark, each of which contain different amounts of medicinal compounds (x).

Willow bark contains salicin, a compound that has a similar makeup to aspirin. When the body consumes salicin, it transforms into salicylic acid, a precursor to aspirin. People have used white willow bark medicinally for thousands of years, but it wasn’t until the late 1800s that chemists discovered a way to make a synthetic version of the molecule called acetylsalicylic acid, which is the active ingredient in aspirin. Similar to aspirin, white willow bark extract may help alleviate inflammation in the body and reduce pain, impacting the joints, digestive system and respiratory system (x).

White willow bark extract comes in many forms, including powder, pills, capsules, extracts, teas and tinctures. Pills and capsules offer convenience, but the powdered form is more economical and makes it easier to control the dosage.

White willow bark may be able to act as a natural alternative to nonsteroidal anti-inflammatory drugs (NSAIDs), such as aspirin and ibuprofen for different types of pain, including headache, backache, joint pain and arthritis. In one study, researchers concluded that white willow bark extract was much more effective than a placebo in patients with low back pain and osteoarthritis (x). Studies also suggest that patients who suffer from headaches and migraines may find relief with an extract of white willow bark, which may have a lesser risk of gastrointestinal side effects that may be common in other pain relievers (x).

Inflammation is the body’s natural response to toxins, injury or other health threats like bacteria and viruses. In the short-term inflammation is necessary, but long-term inflammation disrupts immune function and can cause disease. Chronic inflammation can trigger several serious illnesses, including heart disease, diabetes, Alzheimer’s, arthritis, autoimmune diseases and even premature aging. White willow bark extract may also be able to slow the onset and progression of osteoarthritis because its bioactive compounds inhibit enzymes and hormones that can regulate inflammatory responses (x).

White willow bark extract may even help patients lose weight. Studies have not completely figured out the exact mechanism, but researchers believe it may help boost metabolism and burn fat. It may also amplify other weight loss supplements (x).

The compounds in white willow bark protect the tree from bacterial and fungal infections in the wild and if patients take it internally or apply it to the skin, it offers similar benefits. White willow bark extract contains antioxidants and offers powerful antimicrobial effects that make it useful for treating skin infections and other irritations, including acne (x, x).

Although there are health risks, the American Heart Association states that aspirin may prevent heart attacks and strokes in low-doses. Aspirin works as a blood thinner and reduces the risk of internal blood clots. Because willow bark extract is similar to aspirin, it may offer similar benefits (x).

Menstrual cramps are often due to inflammation and muscle contractions in the uterus from the effect of hormone-like substances called prostaglandins (x). Researchers believe that willow bark can potentially rebalance prostaglandin levels and alleviate inflammation. This not only calms cramps, but other symptoms of PMS as well. However, it is important to note that because it has blood-thinning capabilities, white willow bark may increase bleeding during menstruation. Nonetheless, it can be a safe alternative for those who do not tolerate aspirin well (x).

Salicylic acid is a common treatment for mild to moderate acne and it is potentially more effective than benzoyl peroxide. White willow bark contains salicylic acid and though the exact mechanism is unclear, the body converts salicin into salicylic acid, providing a natural acne treatment (x).

The salicylic acid in white willow bark can also treat a variety of skin conditions, including warts (x). It has astringent properties that make it an effective natural remedy for acne. Salicylic acid makes a great exfoliant which can help clear pores and shed dead skin cells. Other bioactive components that help to rejuvenate the skin include tannins, flavonoids, phenolic acids and minerals (x).

Patients with other skin disorders such as psoriasis may also benefit from white willow bark treatment (x). Thanks to its antioxidant content, it can improve the overall appearance of skin, reducing wrinkles and other signs of aging. It can also reduce inflammation and redness from insect bites or other irritants (x).

Generally, white willow bark extract may be safe for most people in moderation for a short time, up to three months. There are potential side effects, but they are generally mild. Excessive doses can cause similar side effects as aspirin. White willow bark extract may cause stomach upset, nausea and diarrhea. It may also cause ulcers, liver toxicity and kidney damage (x, x).

It is possible to have an allergic reaction to this supplement that may cause rash or itching. Anyone with an allergy or sensitivity to aspirin should avoid white willow bark extract. Those with diabetes, stomach ulcers, liver disease or asthma may be sensitive to aspirin and white willow bark may not be safe (x).

White willow bark may increase the chance of bleeding. Patients with bleeding disorders, such as hemophilia, should avoid this supplement.

White willow bark slows blood clotting. If a patient has any upcoming surgeries, they should stop taking white willow bark at least two weeks prior to the operation (x).

White willow bark extract may reduce blood flow to the kidneys. Patients with kidney disease should not use this supplement because if the kidneys do not receive enough blood flow, it may trigger kidney failure (x).

Women who are pregnant or nursing should not use this supplement. There are not enough studies that test white willow bark on pregnant women to determine its safety (x).

White willow bark extract may be able to help relieve several health conditions. It is neither a quick fix nor a replacement for any medical condition. But this supplement can be an excellent addition to your diet to potentially benefit overall health. However, do not consume it daily without the supervision of a medical professional.

White willow bark extract has a long history of providing natural pain relief. White willow bark has a history of reducing fever and inflammation and boosting the immune system that dates back two thousand years. Studies claim that it may treat arthritis, diabetes and Alzheimer’s disease. It might even reduce the risk of heart attack. Research shows that it may also be able to alleviate muscle aches and joint pain, as well as migraines and headaches.

It also offers many other potential benefits including calming an upset stomach, healing skin and it may even help with weight loss. Willow bark extract has a range of side effects and potentially negative interactions, so anyone looking to add it to a supplement regimen should consult a doctor about their dosage. It is generally safe, but those with blood disorders, kidney disease or a sensitivity to aspirin should not use it. There is not enough research to determine if it is safe for pregnant or nursing women. Even though white willow bark may have health benefits, it is not a replacement for medical treatment and it is always best to consult a healthcare professional before starting a supplement regimen.