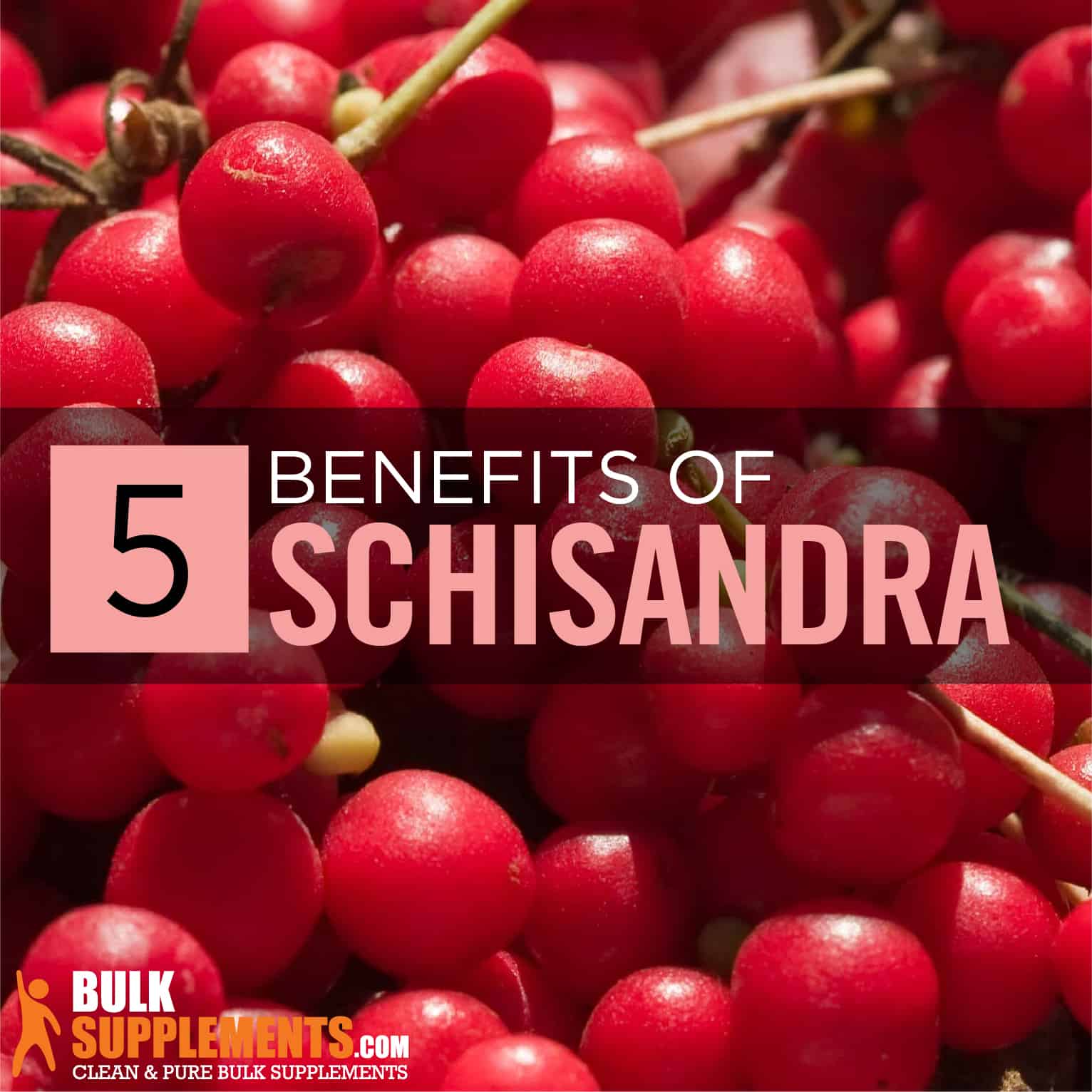 What is Schisandra Extract?

Schisandra extract comes from the Schisandra chinensis plant. This vine grows up to 30 feet in length in areas like China and Russia. Also known as magnolia vine, schizandra or wu wei zi, its berries are used for their therapeutic properties. Sometimes called the “five flavor berries,” they encompass all five major flavors — sweet, sour, bitter, spicy and salty.

Traditional Chinese medicine practitioners use this botanical mainly for its purported “blood cleansing” abilities. In the 1960s, Russia studied it for its stress-protective effects (x, x).

Schisandra extract is now available as a dietary supplement. It comes in many forms, including schisandra extract powder. Modern research is just now attempting to nail down the specifics of its pharmacological and clinical benefits. History and current research suggest that schisandra extract may improve liver function, reduce anxiety and boost mental and athletic performance.

The schisandra berry works as an adaptogen. What does this mean? Adaptogens help the mind and body “adapt” to external and internal stressors. They exhibit a neuroprotective and anti-fatigue effect. Adaptogens also increase stamina during times of mental and physical exhaustion. Researchers identified specific ways that adaptogens work on a molecular level to achieve this. They have an effect on the HPA-axis and help regulate the body’s stress response (x).

Additionally, schisandra contains compounds that have potent anti-inflammatory, antioxidant and detoxifying effects (x). Some are named after the berry, like schisandrin A, B and C.

Adaptogens help the mind and body deal with all types of stress, including mental, physical and psychological. This gives them many applications.

For example, a racing mind or stressors are major contributing factors to insomnia. In turn, insomnia can cause someone to feel stressed and irritable. A study showed that schisandra exerted a sedative effect on mice, reversing insomnia caused by caffeine intake (x). Schisandra also serves as a sleep and relaxation agent.

The presence of physical and/or emotional stressors are also risk factors in the onset of depressive symptoms (x). Schisandra, through its adaptogenic actions, can help alleviate depressive symptoms by reducing stress. This was only observed in a few animal studies, however, and by no means is schisandra considered a stand alone treatment for mental health issues (x, x).

Schisandra extract may also help protect the brain and cognitive abilities. Animal studies suggest that the schisandran B and other antioxidants found in the extract can block the formation of certain proteins in the brain. The presence of these proteins, called beta-amyloid peptides, are one of the major signs that Alzheimer’s disease is setting in (x, x).

Not only that, but the schisandran B has a powerful anti-inflammatory and neuroprotective effect on the microglial cells in our brain. This makes it not only relevant for studies pertaining to Alzheimer’s disease, but also Parkinson’s disease (x).

Schisandra extract works to improve mental performance in another way, too. We know that adaptogens help the mind and body to better handle stress. When one manages stress, the brain can think more clearly. A small human study backed schisandra’s use for improving thinking under stressful circumstances. In a double-blind, placebo-controlled trial of 40 chronically stressed women, those who were given an herbal combination that included schisandra extract showed better attention, speed and accuracy on a difficult task compared to the placebo group (x).

When people perform challenging physical tasks or exercise, the body’s nitric oxide (NO) levels increase to allow oxygen and nutrient-rich blood to flow more efficiently to muscles and organs. A study shows that schisandra given to athletes before physical exercise exerts the same NO-boosting effect but with no corresponding increase in cortisol or glucose. This is important during strenuous exercise because by minimizing the rise in cortisol and glucose, schisandra is helping your body fight off fatigue. The result is more energy, endurance and increased physical capacity during exercise (x, x, x).

Due to high antioxidant levels and anti-inflammatory effects of schisandra extract and pollen, it is used in traditional Chinese medicine to treat liver diseases including hepatitis, cirrhosis and non-alcholic fatty liver disease. The compounds appear to exert a direct effect on liver cells. The extract’s effect on nitric oxide levels and impact on “blood fluidity” may also play a role in liver healing (x, x).

Schisandra extract can be useful for women experiencing symptoms of menopause. In a study, 36 women between the ages of 40 and 70 received either an extract containing schisandran C or a placebo for six weeks. After this time, those who took the extract reported a reduction in hot flashes, sweating and heart palpitations (x).

The herb may also be a good addition to a larger herbal protocol for women dealing with polycystic ovarian syndrome (PCOS). Addressing PCOS naturally calls for herbs that exert hormone balancing, insulin regulating and stress reducing actions. Schisandra is identified as an effective herb for stress reduction in relation to PCOS (x).

Schisandra Extract Dosage and Side Effects

As a dietary supplement, take 910 mg (1/2 tsp) of schisandra extract powder once or twice daily, or as directed by a physician. It is best to take it with meals. As with all supplements, be sure to speak to a doctor before adding this supplement to your regimen.

Side effects of using schisandra extract include heartburn, upset stomach, decreased appetite and skin rashes. Do not take this supplement if you have epilepsy, gastroesophageal reflux (GERD), peptic ulcers or high intracranial pressure (x).

Schisandra extract helps the body cope with physical and mental stress. Since stress intertwines with many areas of our well-being, including sleep, emotional health, physical energy and disease states, it’s important to have a handle on it. Used regularly in traditional Chinese medicine practice and studied extensively in post World War II Russia, schisandra is now becoming a more popular dietary supplement outside of Asia. This adaptogenic, antioxidant and anti-inflammatory botanical has a good safety record if used as directed.