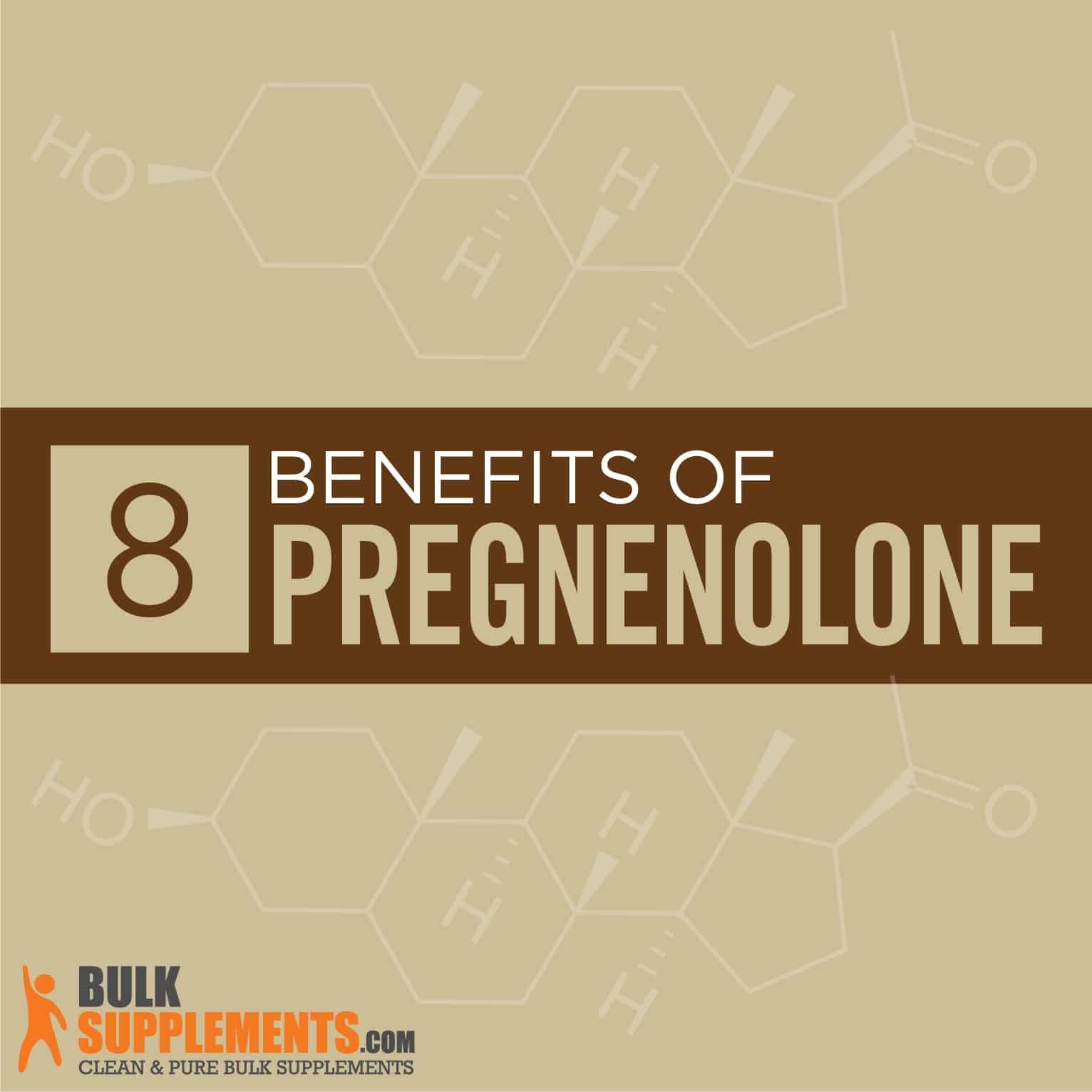 Energy levels tend to decrease as a person gets older, and people tend to find it harder to muster the same energy they enjoyed as young people. General fatigue and ‘brain fog’ due to tiredness is not uncommon.

Fortunately, there are some safe and natural remedies that can help you rediscover the energy you used to have, and one of the best is pregnenolone.

Pregnenolone is a molecule that serves as the foundation piece for a wide range of hormones in the body, or a precursor. This means that many other hormones in the body derive from this molecule, including testosterone, DHEA, estrogen and cortisol (x).

Pregnenolone is, essentially, boosting what is already naturally produced in the body since it is involved in so many different hormone pathways throughout the body (x). And even though it naturally occurs in the body, levels may begin to decrease as you age.

Given the wide range of hormones that derive from pregnenolone, significant decreases may cause widespread issues throughout the body. This can lead to issues with energy, libido, sleep, memory and cognition.

Research over 60 years ago discovered the role that pregnenolone may play in boosting energy and well-being (x). Ever since, it has been used for this purpose, as well as for a wide range of other medical conditions such as depression, arthritis and schizophrenia. It appears that pregnenolone does a little bit of everything, making it an extremely versatile supplement.

The pregnenolone you take as a supplement is produced artificially, but is identical to that found in the body. That means it will still be bioactive when you take it as a supplement.

Pregnenolone has a wide range of benefits for different medical conditions, as well as a general mood and cognitive booster.

Pregnenolone appears to alleviate some symptoms in people that suffer from various types of arthritis — a condition that leads to inflammation in joints throughout the body.

In patients with rheumatoid arthritis, pregnenolone may reduce joint pain and increase joint mobility (x). This can help get you back to doing what you love and get you moving again.

Pregnenolone may also have a role in hormonally based depression. Studies have shown that depression can be linked with lower levels of pregnenolone (x). Depression can be debilitating, affecting your relationships, work life and taking the joy out of even your favorite activities.

Although the use of pregnenolone as a form of treatment for depression has not been studied extensively, there are reports that taking high levels of it can increase subjective feelings of well-being (x). This indicates that it could potentially have a role in the treatment of depression.

Depression as a result of BPD can be particularly difficult to treat as traditional antidepressants and other treatments may be ineffective or have unexpected results. One study of the effect of pregnenolone on the depression in individuals with BPD showed that it may have antidepressant effects through multiple mechanisms. The use of pregnenolone to treat BPD is supported by both preclinical and human trials (x).

Any treatment of depression or bipolar disorder should be done under medical supervision, if you are experiencing depression, anxiety or other symptoms of BPD, reach out to your doctor or local mental health service.

Pregnenolone benefits those with low energy levels. It is also effective even in those who are otherwise healthy.

In one study, pregnenolone helped people learn and perform complex tasks more easily (x). This suggests that it may be a good supplement for those losing energy at work and need a boost to stay on task. The effects don’t seem to vary much by age, which means that even young and otherwise healthy people may be able to benefit from pregnenolone.

It also appears to have a positive effect on people’s subjective feelings of well-being (x). This could make you feel more energetic and happier throughout the day, in turn helping you be more productive.

Pregnenolone appears to be effective as a supplementary treatment for schizophrenia. Schizophrenia is a debilitating mental disorder that can lead to hallucinations, as well as other symptoms such as loss of sense of pleasure and social withdrawal (x).

A study in 2014 found that over the course of eight weeks, the addition of pregnenolone appeared to help ease the severity of some symptoms in those with recent-onset schizophrenia and schizo-affective disorder (x).

In one study, women who were given pregnenolone alongside an antipsychotic saw greater improvement than those treated with just the antipsychotic (x). More research is necessary to understand pregnenolone’s role in the disorder, but it appears to be a safe supplementary treatment (x).

There is some evidence that pregnenolone can help avoid some of the cognitive and memory disturbances associated with old age.

Studies in rats showed that pregnenolone boosted acetylcholine levels dramatically (x). Acetylcholine is a key neurotransmitter with a large role in cognition. By boosting levels of this neurotransmitter, researchers found that rats had improved cognitive recognition. More studies are necessary in humans, but these findings indicate that pregnenolone could have a role in maintaining proper cognitive function as you age.

In addition to pregnenolone’s benefit to cognition, there has been research conducted on mice that shows it may also have a positive effect on memory (x). More research is needed to see if this finding fully translates to humans, but it does suggest that pregnenolone could have a positive impact on the memory systems in the human brain.

More research is needed to see how pregnenolone impacts the performance of those in jobs less stressful than that of a fighter pilot. However, the research so far indicates that it could be a good supplement for those looking to boost their performance.

Because pregnenolone has a positive impact on energy levels and well-being, it may also be able to give you that extra edge in the gym. With more energy, you’re less likely to burn out halfway through a workout. Additionally, the effects on cognition could possibly help you stay locked in at the gym.

Pregnenolone has a positive impact on energy levels and sense of well-being. For some users, however, it can boost energy too much, leading to a feeling of overstimulation.

This is more common when users first begin to take pregnenolone and often goes away as your body gets used to the supplement.

For those who struggle with fatigue issues, it may take some time to adjust to the boost of energy from pregnenolone. This, however, is healthy, and your body will learn to adapt to having more energy.

If you continue to feel overstimulated you should consider reducing your dose or discontinuing use of the supplement.

Because pregnenolone can cause overstimulation and affect sleep, it may also make you more irritable.

This will often go away as you adjust to the supplement. Lower your dose if the irritability is not going away. And if it still remains, consider discontinuing use of the supplement.

If you feel anxious when taking pregnenolone, first lower your dose to see if the side effect goes away. If not, discontinue use.

While pregnenolone is not currently on the World Anti-Doping Agency (WADA) 2017 list of prohibited substances, this list can change at any time. Make sure you check its status before starting to supplement with pregnenolone (x).

As no research has been done on the effects of pregnenolone in pregnant and breastfeeding individuals, they should avoid taking it unless directed to by a doctor.

There is no standard medical dose for pregnenolone, and dosages vary depending on its use.

Take 20 mg one to two times daily, or as directed by a doctor. Do not exceed 50 mg per day. Moreover, do not take pregnenolone for more than 30 days without the approval of a doctor. Be sure to use an accurate milligram scale to ensure you are taking the right dosage.

Pregnenolone is an excellent supplement for anyone looking to get an extra kick. It can boost your energy and protect your cognitive function. Additionally, pregnenolone can assist those who are working to manage depression, schizophrenia and bipolar disorder though these issues need to be managed alongside a healthcare professional. It is generally safe to use, though side effects are possible.