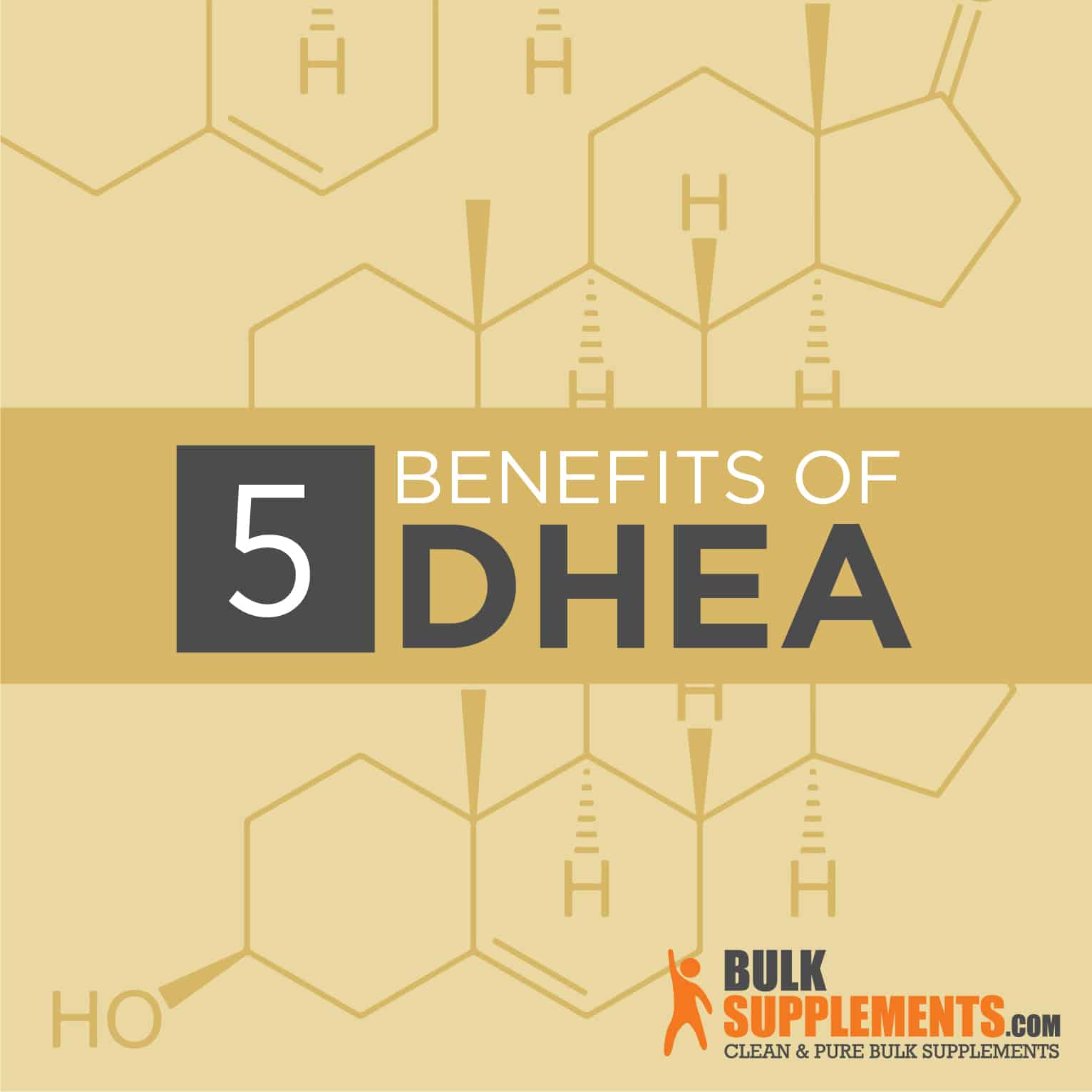 Dehydroepiandrosterone, or DHEA, is a steroid made naturally in the adrenal glands. By itself, DHEA isn’t exactly a hormone, but more of a precursor of hormones. The body uses it to stimulate the production of sex hormones (estrogen, progesterone and testosterone), which determine sexual development and reproductive function (x).

It may be safe to take as a short term supplement for various conditions that cause people to have lower levels of DHEA naturally.

People who exercise regularly show an increased production of DHEA. The studies that have examined this connection show that DHEA production increases after exercise. It does not, however, increase at rest, even after long periods of consistent exercise (x) (x) (x).

People interested in body building research the effects DHEA supplementation has on muscle mass. This interest may stem from DHEA’s status as a precursor to testosterone. Testosterone is the hormone that is mostly responsible for repairing the tiny muscle tears that happen during weight lifting, which build up over time and give muscle a bulkier appearance (x).

Unfortunately, no current data supports the hypothesis that DHEA will increase muscle mass. One study found that it had a slight effect on the body composition of elderly men (x), but other studies are largely inconclusive, stating that androgen levels rise with DHEA use. However, those higher levels of androgen have no effect on muscle strength or function (x) (x).

The jury is out on the effectiveness of DHEA in muscle gains. That said, though, it does have many other interesting benefits!

An intravaginal DHEA-based drug called prasterone is available by prescription for menopausal women, which can improve vaginal dryness and discomfort. It also improves lubrication, desire and orgasm, allowing women to experience better, less painful sex. However, it’s not without risk because prasterone, like any estrogen-related hormone therapy, may increase the risk of breast cancer (x) (x) (x).

May Offset Some Aspects of the Aging Process

Part of the natural process of aging is the slowed production of testosterone, estrogen and DHEA (x). Research suggests that DHEA supplementation may increase bone mineral density and muscle mass in older women, but the evidence is unclear. Moreover, the connection between DHEA supplementation and breast cancer risks to postmenopausal women is also unclear, so it may not be a prescribing doctor’s first recommended therapy (x) (x).

People might research the best DHEA supplement because they’re hopeful that it’s the antidote to the consequences of aging. It’s not the fountain of youth, but there are some instances where this supplement may counteract some symptoms of getting older. For instance, a year-long, 280-person study found that many of its older female subjects felt an increase in their libido (x)! The same study found that DHEA supplementation may improve the appearance of skin. People reported that their skin was oilier, thicker and less prone to dryness. Again, women tended to benefit more from this than men (x).

May Improve Mood and Sense of Well-Being

People have reported an improvement in their cognitive function, mood and well-being after taking DHEA for a period longer than a week. However, the science doesn’t fully back up these claims.

A seven-day, double blind study was conducted on 24 healthy young men who took a placebo or 150 mg daily of DHEA. The study took place because lab rats in a similar trial showed an increase in cognition. With humans, though, researchers found a decrease in the hormone cortisol (a steroid hormone linked to stress) along with improved mood and memory function. While the findings were interesting, the trial was too short to produce conclusive results (x).

A paper from the year 2000 cross-analyzed a German and a USA study about the influence of DHEA on psychological well-being. The German study was two weeks long and the assessment of well-being and cognition found no effect. The USA trial was three months long. A self-assessment was provided to participants, and many people reported feeling an enhanced sense of well-being. Because researchers didn’t oversee that portion of the assessment, it was considered a “crude measure” and the results are ultimately inconclusive (x).

May Reduce Suffering for Patients with Chronic Illnesses

In recent years, DHEA has been studied in relation to several chronic diseases like adrenal hormone deficiency, lupus and chronic fatigue syndrome (CFS).

For instance, in the case of CFS, scientists have pointed to DHEA deficiency as an important area of focus. One study found that 89 percent of participants had “suboptimal” production! More research is ongoing as to how DHEA supplementation may help CFS patients (x) (x).

DHEA supplementation has also been tested on people with adrenal hormone deficiency and lupus — an autoimmune disease where adrenal androgens (hormones) are often low. Scientists were curious to see if a precursor hormone like DHEA could stimulate androgen production. Unfortunately, that did not seem to be the direct effect, but people did feel better. For people with these diseases, mild-to-moderate relief came in the form of a better “quality of life.” This means that DHEA may give patients mild relief from depression or a pervasive sense of well being. However there’s no evidence that it halts the progression of the diseases (x) (x).

In recent years, DHEA has been increasingly used by women trying to conceive through in vitro fertilization (IVF). Under the strict supervision of doctors, women with diminished ovarian reserve (DOR) have been given DHEA to attempt to increase the quality and quantity of eggs produced in an IVF cycle. Findings report that women may produce more eggs and embryos as a result due to increases in androgen levels. Eggs in an androgen-boosted environment may develop into robust embryos whose chances of uterine implantation may be higher (x) (x).

One study of two North American infertility centers found that after DHEA supplementation, the chances of miscarriage were significantly lower (x). This is promising information for women over 35 who want to conceive, but are considered of “advanced maternal age” and have a higher risk of DOR and miscarriage (x).

Ginseng may enhance the effectiveness of DHEA! Ginseng may lower your cortisol levels, and that reduction may make your body’s natural DHEA more effective (x).

Some DHEA supplements are derived from wild yams (x). A study on yams’ effect on women’s bodies revealed that incorporating a large portion of yams into their diets improved sex hormone levels (x).

DHEA Side Effects and Dosage

It is recommended that you use a milligram scale to measure this supplement. Start out taking 5 mg per day and slowly increase to 25 mg over a 1-2 week period of time.

Side effects of DHEA may vary between individuals. This supplement may cause estrogen and testosterone levels to fluctuate. Some common issues may include acne, insomnia, hair loss, gastrointestinal discomfort and headache. In women, changes to menstrual cycles, facial hair growth and deepening of the voice may occur. Other known side effects may include agitation, nervousness and psychiatric issues.

Please consult with your doctor before using DHEA or any other supplemental regimen. It is best to check DHEA levels prior starting this product. After starting with DHEA, levels should be monitored closely every six months while continuing to take it.

There are many potential benefits to dehydroepiandrosterone supplementation. It may give some relief to people with chronic fatigue syndrome, lupus and adrenal hormone deficiency in the form of a better quality of life. Mood and a sense of well-being (both difficult to “measure” in a lab) may also be positively impacted.

Furthermore, DHEA is already being used in contemporary medicine to assist women with sexual issues and infertility. It is a subject of great interest to science, and research is ongoing about its potential future uses!