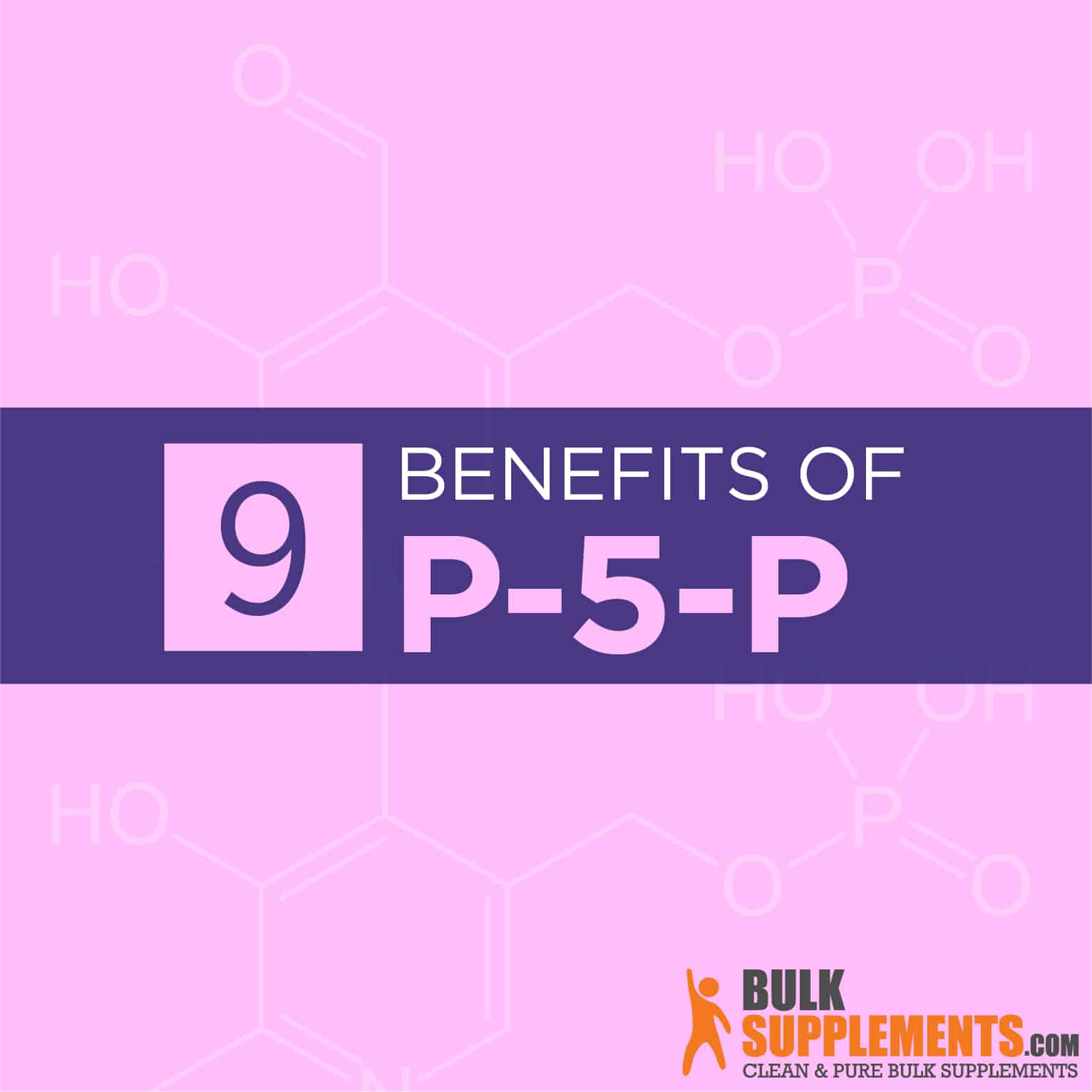 What is Pyridoxal-5-Phosphate (P5P)?

Some reactions take place fairly easily, such as rusting, while others may need a push. Inside the body, that push happens when molecules called enzymes are present (x). This is where P5P comes in. But P5P is a coenzyme. An enzyme is a protein molecule that speeds up or slows down a chemical reaction, whereas a coenzyme is a non-protein molecule that helps an enzyme do its job. A coenzyme cannot catalyze reactions on its own (x). Think of a coenzyme as the thing that flips the switch and gets the chemical reaction rolling. P5P is the active form of Vitamin B6 (x).

P5P has many important jobs to perform in the body. For starters, it’s essential in processing macronutrients: proteins, fats and carbohydrates. P5P also plays a role in producing chemical transmitters such as dopamine and serotonin, as well as supporting new muscle growth and repair. It’s used to make heme for hemoglobin, the protein that transports oxygen around the body (x, x). P5P also supports the body’s anti-inflammatory response (x).

But P5P doesn’t stop there. It regulates nerve, heart and muscle function by keeping potassium and sodium levels balanced (x). On its own and in combination with other enzymes, P5P works to break down chains of amino acids and reform them into other amino acids (x). It assists with cell metabolism and releases energy as the body needs it (x). It is also required for the synthesis of red blood cells and protective white blood cells or antibodies (x).

A P5P deficiency can cause problems in the nerves, skin and blood. Anemia (a lack of iron in the blood) is one possibility (x). Signs of pyridoxine deficiency include diarrhea, rash and even dementia (x, x). Nausea and vomiting may also occur, leading to poor appetite and possibly malnutrition. Confusion, depression and anxiety are other potential indicators (x, x).

Low levels of pyridoxine may cause peripheral neuropathy—pain, numbness and weakness around the body. Some other symptoms include insomnia, soreness on the tongue and irritability (x, x, x).

Decreased immunity can become a problem with a deficiency of pyridoxine (x). Children may experience a form of epilepsy if their bodies cannot metabolize Vitamin B6 (x). A P5P supplement may alleviate many or all of these symptoms and reverse deficiency.

Sideroblastic anemia is a group of blood disorders in which the bone marrow does not produce healthy red blood cells, due to an inability to convert iron into hemoglobin. The iron accumulates in the red blood cells, creating a ringed sideroblast, or a ringed nucleus in the cell. Symptoms include fatigue, weakness, trouble breathing and an enlarged spleen and/or liver. It can be inherited or acquired from other conditions or drug or toxin exposure. The cause may also be idiopathic, or unknown (x). In certain instances, a P5P supplement may help. According to a research study, the supplement helped alleviate the symptoms in a 72-year-old patient (x).

A P5P deficiency may increase the risk for cancer of the cervix and pancreas. Studies show that many women with cervical cancer are deficient in Vitamin B6 (x). Researchers need to conduct more studies, but because there is a connection between the two, P5P supplements may reduce the risk for cervical cancer.

Pancreatic cancer is less common than other types, but it is very aggressive and estimated to have killed 45,000 Americans in 2019 (x). One study further revealed that a full quarter of pancreatic cancer patients were deficient in Vitamin B6 and that subjects who consumed higher levels of Vitamin B6—either from their diet or from supplements—had a reduced risk for pancreatic cancer (x).

Age-related macular degeneration (AMD) is an increasingly common disorder that causes vision loss, mostly in people older than 50. The macula is a small spot near the middle of the retina which is necessary for clear central vision. AMD may progress slowly, or it may move fast (x). Studies claim that P5P supplements with other B vitamins may prevent vision loss from macular degeneration (x).

Coronary heart disease is the number one killer in both men and women in the United States. It is caused by plaque building up in the arteries. Atherosclerosis is a condition in which the arteries harden and lose flexibility (x). According to research studies, B vitamin supplements, including P5P, may reduce the progression of early atherosclerosis (x).

Certain people have a higher likelihood of developing kidney stones due to a genetic disorder called type I primary hyperoxaluria (x). Some research indicates that a B6 supplement with or without magnesium may decrease the risk of kidney stones for those with this inherited condition (x). However, it’s vital to note that Vitamin B6 does not seem to help those who have developed kidney stones as a result of other causes.

Studies suggest that taking Vitamin B6 in the form of pyridoxine may reduce nausea and vomiting for pregnant women. In fact, the American College of Obstetrics and Gynecology recommend Vitamin B6 first as a treatment for this complaint in early pregnancy (x).

Tardive dyskinesia is a movement disorder in which the muscles of the face, neck, and limbs twitch involuntarily. It is sometimes a side effect of antipsychotic drugs used to treat schizophrenia. Studies show that P5P supplements may help improve symptoms of this condition in some patients. However, the claim requires more research (x).

Glycation is a process in which sugar attaches to protein and forms harmful new molecules called advanced glycation end products (AGE) (x). Cataracts are one example of glycation; poor kidney function is another (x, x). AGEs can affect collagen production, causing premature aging. Wrinkled, sagging skin is one of the most visible signs. Studies suggest that Vitamin B6 may help protect against the glycation process and inhibit AGE formation (x).

Side Effects of P5P

Vitamin B6 is a natural substance and the body needs it to produce chemical reactions. It is also water-soluble, meaning the body releases it in urine. People almost never suffer from too much Vitamin B6 from food, but they can get too much of it in supplement form if it’s taken for too long (x). It may potentially cause headaches, nausea, vomiting and upset stomach (x). Other side effects include skin rashes, nerve damage, sensitivity to light, heartburn and neuropathic pain (x, x).

It’s always critical to consult with a doctor before adding any supplement to your health regimen, including P5P. The recommended dosage is 50 mg a day with meals, unless a physician recommends otherwise.

Vitamin B6 is found naturally in a variety of foods, including fish, liver, beef, starchy vegetables and non-citrus fruits (x). However, food preparation may reduce vitamin levels. Cooking, canning, freezing and processing can destroy up to 50 percent of Vitamin B6 (x).

Also, the liver must convert Vitamin B6 to P5P before the body can use it. For those with a healthy liver, this should not be a problem, but compromised liver function can result in a deficiency (x). Other vulnerable populations may include those with celiac disease and potentially autism, although researchers cannot confirm the relationship (x, x).

However, with a P5P supplement, the conversion process has already been completed and users experience the benefits faster. It can provide more physical energy, mental energy and a better memory.

P5P is a coenzyme of Vitamin B6. A coenzyme is responsible for helping enzymes catalyze chemical reactions. It is integral to several different bodily functions, including metabolism, muscle growth and anti-inflammatory response. Studies show that it may be able to help prevent the risk of heart disease and potentially cervical and pancreatic cancer. Vitamin B6 is also used to treat nausea in pregnancy and slow the skin’s aging process.

Insufficient P5P intake may cause a wide variety of health issues, including anemia, depression, irritability, lack of appetite and skin rashes. Although P5P may be able to help treat or prevent health conditions, supplements are not a sufficient replacement for medical advice or treatment. Consult a doctor before adding P5P to your dietary routine.