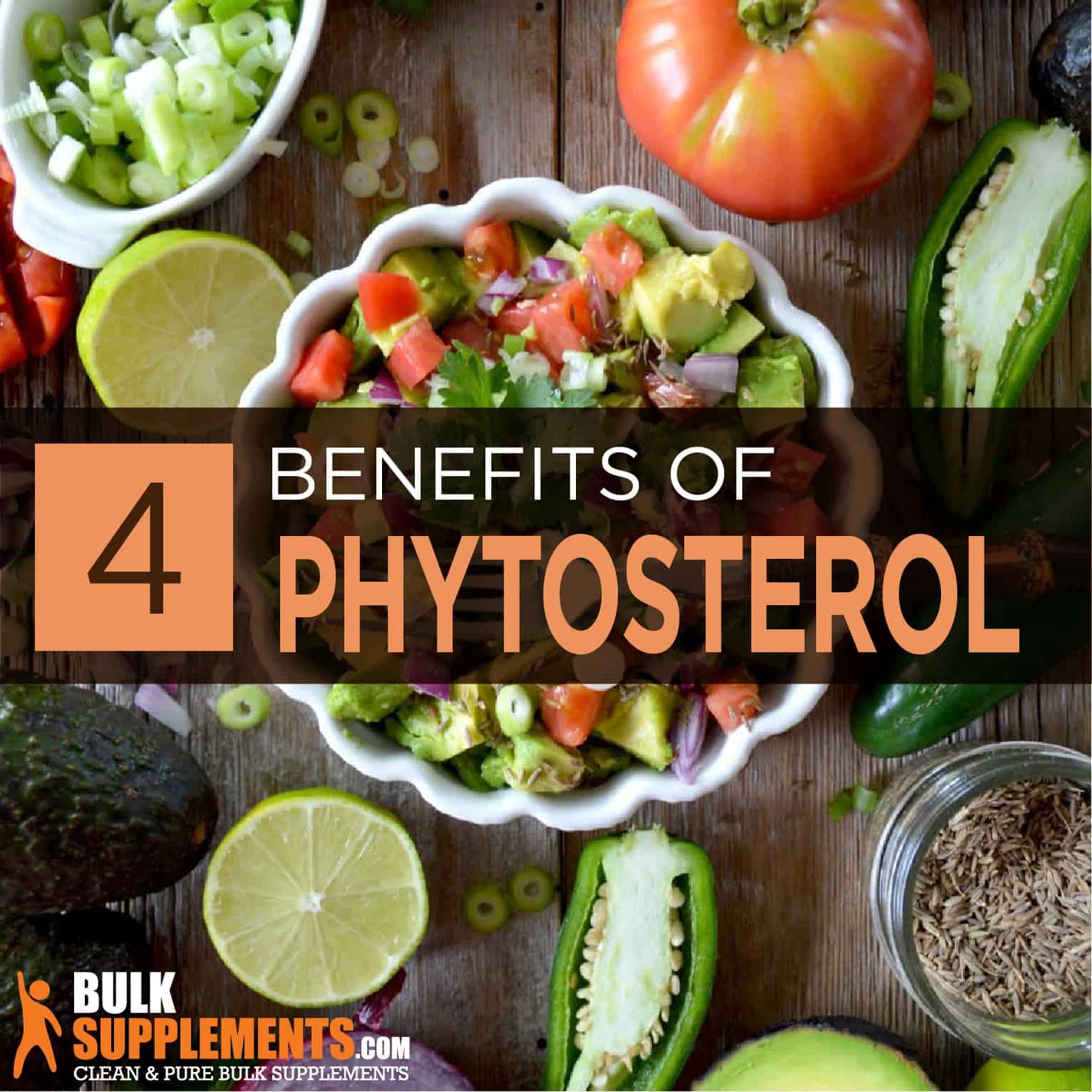 There are studies that indicate how phytosterols may reduce oxidation and inflammatory responses from the immune system. More research is needed to substantiate these findings, but they indicate that phytosterols could potentially play a role in reducing inflammation throughout the body (x, x).

There is also evidence that phytosterols may have cancer fighting properties. One study tested their effectiveness on different types of cancer cells—lung, stomach, ovarian and breast. The results concluded that they stopped the cancer cells from forming and spreading and that phytosterols may protect against cancer development (x). These findings need more research, but they indicate that there may be some benefit to using beta sitosterol as a supplementary treatment.

Benign prostatic hyperplasia (BPH) is a condition in which the prostate becomes enlarged, which can lead to frequent urination (x). Phytosterols may ease urinary symptoms related to BPH (x). It’s unclear whether beta sitosterol is directly related to the prostate, as far as treating the disease or just reducing symptoms.

Side Effects of Phytosterols

Unlike refined grains, whole grains still have the bran and germ of the seed. These parts of the grain seeds have valuable nutrients, including phytosterols. Rye bread, flaxseed and wheat germ are excellent sources of phytosterols.

There are also plenty of phytosterols in legumes, such as kidney beans, lentils and soybeans (x).

Nuts are some of the most nutrient dense foods available. They make healthy snacks and many varieties of nuts also have phytosterols, like pistachios, cashews, macadamia nuts and almonds.

Vegetables aren’t quite as rich in phytosterols as some other types of food. However, they still contain a lot of other nutrients. Broccoli, carrots, corn, Brussels sprouts, spinach and lettuce all contain phytosterols.

Beta sitosterol is one type of phytosterol. The recommended dosage of beta-sitosterol phytosterol is 1,000 mg once or twice a day before meals. If you’re considering using beta-sitosterol supplements to help with a specific medical condition, consult a doctor first. Follow any medical advice from a physician when it comes to supplementation and it is not an adequate replacement for medical treatment.

Although there are plenty of dietary sources for phytosterols, there are numerous benefits of taking it as a supplement. For example, you can control the dosage and make sure that you’re receiving the same amount of phytosterols every day. Even with quality foods, nutrient levels will vary widely. If you’re consuming phytosterols for a medical condition, fluctuating levels can make it less effective. By taking a supplement, you can control how much beta sitosterol is in your diet.

The body also does not absorb phytosterols easily (x). Even with a diet high in phytosterols, the body may not actually be getting much of it. Taking a supplement of beta sitosterol ensures that the body gets enough to receive its therapeutic benefits.

Another important benefit of supplementing phytosterols in the form of beta sitosterol is convenience. Foods with a lot of phytosterols can become expensive. And since it’s hard for the body to absorb, you’ll have to eat a ton of these foods to get enough of it. By taking a beta sitosterol supplement, you can obtain the high dose you’ll need for it to be effective without having to scarf down a ton of food. Supplementation is more convenient and it can save you time and money.

Phytosterols are a group of compounds that come from plants. Because they are structurally similar to cholesterol, they are an excellent supplement for those looking to lower cholesterol levels. It competes with cholesterol in the digestive system and keeps the body from absorbing too much of it. They may also have cancer fighting properties, help with prostate issues and reduce inflammation in the body.

It is naturally present in foods, such as whole grains, fruits, vegetables, nuts and legumes. But they are also available as a supplement for ease and convenience. The supplement is generally generally safe, with only a few potential gastrointestinal side effects. Whether the intention is to lower cholesterol levels or to protect the prostate, beta sitosterol is a great addition to just about any supplement routine. Remember to consult a physician before adding supplements to a dietary routine, as it does not replace medical advice or treatments.