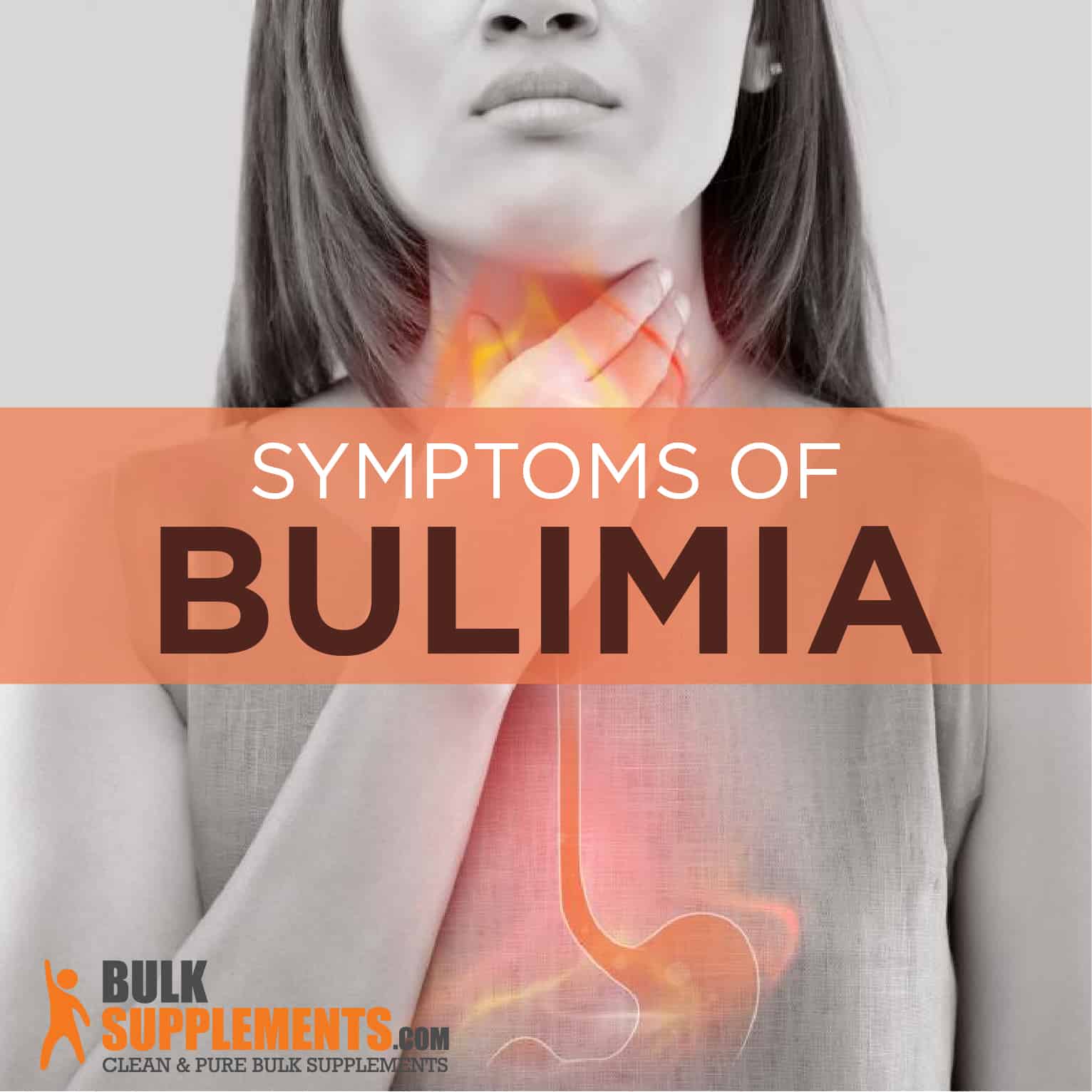 What is Bulimia Nervosa?

Bulimia nervosa, otherwise known simply as bulimia, is a serious eating disorder that can become life-threatening. The disorder consists of binge eating followed by purging. In other words, those impacted eat large amounts of food over a short period of time. Purging occurs when they use forced vomiting or the use of laxatives to remove that food from their body. Repeated binge eating and purging is part of the bulimia cycle.

Ancient Roman elite purged themselves to be able to eat more during feasts that lasted for hours (x). It wasn’t until recently (mid 1900s) that being thin became popular. However, this trend has turned out to be a damaging one.

Women are the most likely to suffer from bulimia, and it is even more common in young women. Bulimia nervosa is more common in developed countries where undue significance is placed on unrealistic body images (x).

How Do You Know If You Have Bulimia?

There are many warning signs and symptoms to be aware of if you believe you or someone you know may be suffering from bulimia nervosa. Just a few of these include compulsive exercise, binge eating and voluntary purging. While binge eating is fairly self-explanatory, purging can take several different forms. The most common form of purging is self-induced or forced vomiting. However, laxative use can also be a form of purging for bulimia. Periods of fasting can also play a role.

Does Bulimia Cause Weight Loss?

Bulimia can result in weight loss. In fact, one of the many signs of bulimia is fluctuating weight. Bulimia and weight loss tend to go hand in hand as people suffering from bulimia purge necessary nutrients before they can be absorbed.

Is Bulimia a Mental Disorder?

Yes. According to the DSM-5, there are five criteria to look for to diagnose bulimia nervosa.

Bulimia nervosa causes a wide range of symptoms, some of which are more obvious than others. Most people are familiar with the common signs of bulimia but are less familiar with all of the symptoms that bulimia can cause.

Additionally, it can cause Russell’s sign, the presence of calluses on knuckles from forced vomiting. Other physical symptoms of forced vomiting include oral trauma such as swelling around the cheeks and jawline (x) and discolored, stained teeth from eroded enamel (x). Whether someone suffering from bulimia is purging through forced vomiting or laxatives, a serious symptom is electrolyte imbalance (x).

The overwhelming amounts of food that one consumes during binge eating episodes can lead to Boerhaave syndrome, which is when so much pressure is put on the esophagus that it ruptures. Not surprisingly, bulimia can lead to many gastric problems, such as constipation, diarrhea and gastroparesis, which is when stomach motility is significantly slowed or stopped completely. It can also lead to peptic ulcers.

Loss of important nutrients can also lead to infertility, mood swings and difficulty concentrating (x). Moreover, the imbalance of electrolytes can lead to tachycardia, heart palpitations and hypotension.

In addition to anemia, low hormone levels and low potassium, bulimia sufferers are likely to have poor immune function and difficulty healing from injuries (x).

Bulimics often show an obsession with caloric intake and, as a result, skip meals or eat very small amounts. They are usually overly concerned with weight loss, fad diets and food control (x).

Those suffering from bulimia usually have an obsession with weight and suffer from low self-esteem. They are often prone to self-harming, with and without suicidal tendencies (x). They commonly suffer from depression, anxiety and sleep disorders.

It is not uncommon for bulimia sufferers to have food rituals, steal or hoard food (x). Bulimics also often struggle with risky, impulsive behavior and substance abuse (x).

After consuming large amounts of food, those suffering from bulimia make frequent bathroom trips (x). They may be prone to excessive use of mouthwash, gum and mints to hide the smell of vomit on breath (x).

Other signs of bulimia include inappropriate use of diuretics and diet pills as well as excessive water consumption (x). They often are prone to compulsive, excessive and rigid exercise, regardless of illness or injury specifically to burn calories (x).

Bulimics often have discomfort or fear of eating in public or with others (x) and will hide their bodies by wearing baggy clothes (x). Additionally, they will usually have unhealthy appearing dry skin, hair loss, brittle nails and cracked lips (x).

While there is no known specific cause of bulimia nervosa, there are several risk factors that can make someone more likely to suffer from bulimia.

Perfectionism is a definite risk factor as well. For example, perfectionists tend to have inaccurate evaluation of body image. A history of anxiety disorder combined with perfectionism can make a dangerous combination if weight is a trigger for someone.

People that have the inability to have flexibility with rules or the way things “ought” to be can find it difficult to be accepting of their own “flaws” in their body image (x).

Those that have been subjected to fat-shaming (weight stigma) are very likely to have difficulty accepting their body image. Especially if they have also been subject to bullying (x).

While you may not immediately think of supplements to help treat bulimia, there are a few that can help treat the symptoms of bulimia.

ALCAR is an antioxidant with great mental health benefits. Many people take ALCAR to improve their mood and energy level as well as improve their cognitive function. Because bulimia nervosa is an eating disorder that is usually related to depression and anxiety, ALCAR can be very helpful. Generally, there are no side effects unless too much ALCAR is consumed, then there may be a few side effects such as increased blood pressure, diarrhea and fever. These few side effects are only applicable if too much is consumed, making ALCAR much more tolerable than pharmaceuticals for many people (x). Those with a history of seizures should not take ALCAR. Mix 1 tsp of ALCAR powder in water (or better yet, citrus-based drinks), one to three times per day.

Ascorbic acid powder is important for maintaining a healthy immune system, regulating hormones and healing damaged tissues. Among the many nutrients that bulimia sufferers become deficient in, vitamin C is particularly important to replace. Side effects of ascorbic acid powder are rare and mild if they do occur. No more than 2,000 mg should be taken per day. Pregnant women and anyone with a copper deficiency should use caution. Dosage is ¼ teaspoon daily mixed with fruit juice.

BCAAs are made up of leucine, isoleucine and valine, three of the nine essential amino acids. They are essential for protein synthesis, functioning of the immune system and helps to prevent faulty communication in neurotransmitters. It should be taken in doses of a ¾ teaspoon three times daily and either 30 minutes before or after exercise. Taking it with a meal may help combat nausea. It does, however, have a very bitter taste. Many people prefer to add it to a smoothie or fruit puree. BCAA should be introduced in smaller amounts and slowly worked up to full dosage. Otherwise, some people may experience exhaustion and muscle pain. Use caution if you have liver or kidney issues.

Magnesium is an electrolyte that is essential for maintaining a healthy heart rhythm. A deficiency in magnesium can result in cardiac arrest and death. It should be taken in a ½ teaspoon dose once per day. Too much magnesium can lead to several side effects including gastrointestinal issues, low blood pressure, and muscle weakness. Those with kidney problems should consult their physician prior to taking this supplement. It is best to dissolve magnesium powder in a citrus based liquid for ease.

Ultimately, it is important to understand that bulimia nervosa is an eating disorder that affects people of varying ages, both male and female, of all socioeconomic classes. There are many signs and symptoms to watch for if you believe you or someone you know may be suffering from bulimia nervosa. While the journey to recovery can be long, there are treatments and supplements to help bulimia sufferers, and it is well worth it, as the effects of bulimia can be extremely damaging.