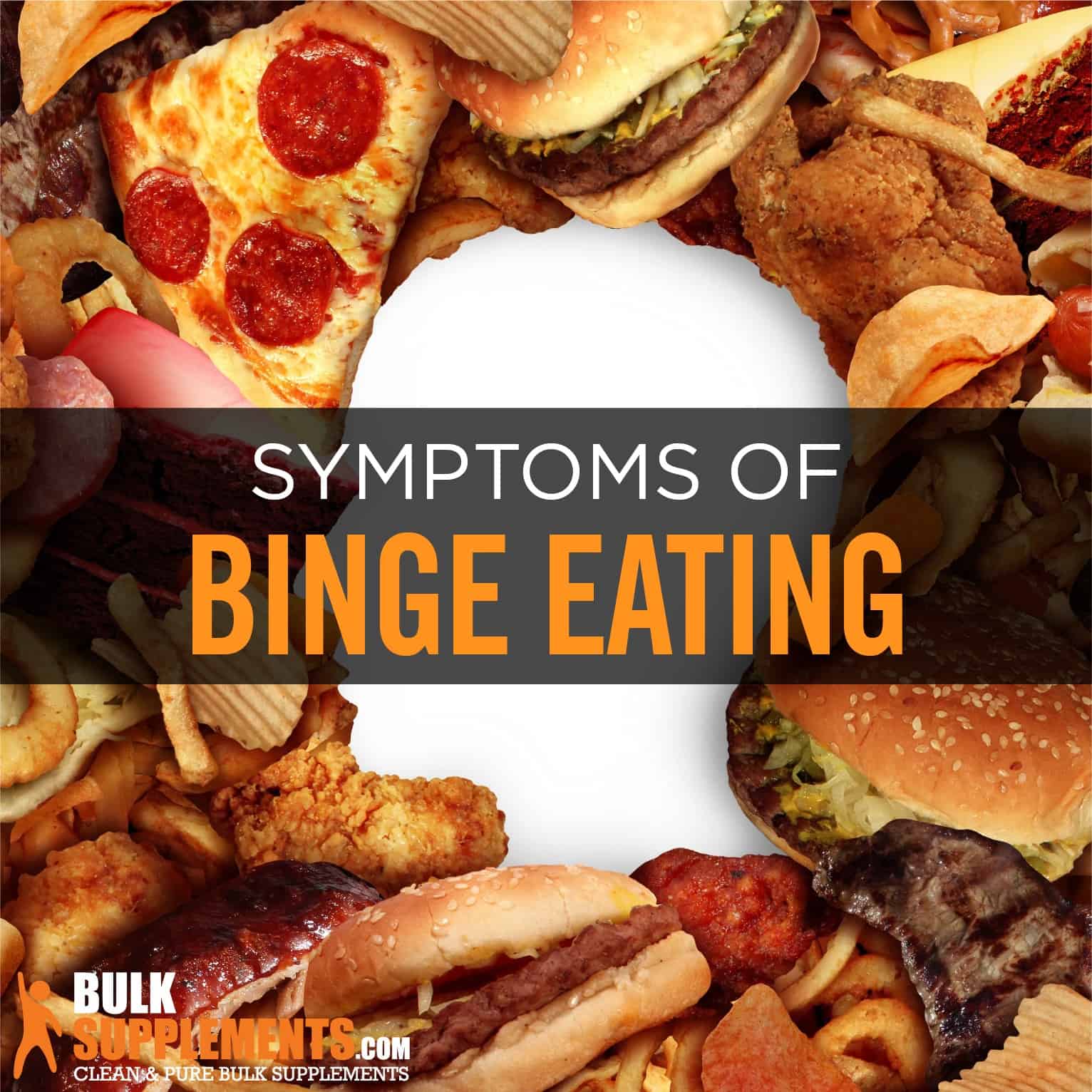 What is Binge Eating Disorder?

Binge eating disorder is the most common eating disorder in the United States (x). Approximately 2 percent of adult men and 3.5 percent of adult women meet the criteria for BED (x). Physicians diagnose the disorder according to a set of behavioral criteria—overwhelming emotions of shame, guilt or embarrassment about eating, lack of control over eating during the binge episode, eating rapidly, eating until feeling uncomfortably or painfully full. It can cause a number of health complications, including obesity and high blood pressure. It is related to a number of factors, including hormonal malfunctions, emotional trauma and depression. Although it is a severe condition, BED is treatable with medication and therapy.

A psychiatrist or physician who specializes in eating disorders is the best person to properly diagnose binge eating disorder. There are emotional and behavioral characteristics, as well as physical signs. To be diagnosed, the patient must have at least one binge eating episode per week for at least three months straight (x, x).

It is not clear what causes binge eating disorder, but there are risk factors that may play a role.

Hormones and chemicals affect eating behaviors and patterns. Binge eating produces a surge of dopamine and serotonin that increases pleasure and generates a sense of well-being that alleviates psycho-emotional pain (x). BED is associated with chemical releases in certain parts of the brain.

For example, the hypothalamus is a small, pea-sized part of the brain that maintains body temperature, blood pressure, stress and hormones that control hunger and feeling full after eating. By regulating hormones from the hypothalamus, the body maintains an even keel (x). It’s possible that binge eating disorder results when the hypothalamus fails to send correct messages to the brain about hunger (x).

Patients with binge eating disorder often have other accompanying mental health conditions (x). It is linked to anxiety and inability to cope with stress, sadness or boredom. BED patients show a lack of control over emotions and impulses, which results in extreme overeating. People eat when they are stressed because stress causes the body to release cortisol into the bloodstream, which is responsible for the “fight or flight” response. The person craves energy to fight the stressor and starts to feel hungry (x).

Having an obsessive personality or disorder may also contribute to an eating disorder, such as obsessive-compulsive disorder (OCD). Eating disorder patients may have obsessive thoughts about food or rituals surrounding eating to achieve perfection, similar to OCD behaviors (x).

There may also be a connection to depression. Experts are not sure exactly why the two conditions are related. But research shows that people who binge eat are at risk for depression and people with depression are more likely to binge eat (x).

Binge eating disorder affects men and women disproportionately. More than half of all BED patients are women, which is more than 3 percent of the U.S. population. However, some women face a higher risk than others. Women who diet are more at risk than those who don’t and it usually affects younger women more than older women. It often develops in women in their 20s (x).

People with eating disorders tend to suffer in silence until their behavior is discovered. There’s a sense of shame and guilt that accompanies BED. A person with binge eating disorder usually has weight fluctuations, but ultimately, obesity may eventually solidify.

BED often causes other emotional and mental hurdles, such as anxiety and depression. Research suggests that anxiety may play a role in the disorder. One study concluded that 13 percent of BED patients had general anxiety disorder, 22 percent had social phobia and 46 percent had major depressive disorder (x).

Women with BED may also have menstrual and pregnancy complications. Obesity increases estrogen levels in the body, which can interfere with ovulation. It may also cause high blood pressure, preeclampsia and gestational diabetes (x). BED may also increase the risk of polycystic ovary syndrome. The disorder causes intense food cravings that may turn into binge eating disorder (x, x, x).

Overcoming binge eating with therapy and medication can help break the binge cycle eating. A compulsion to eat uncontrollably remains that: a compulsion. Binge eating may be treated with cognitive-behavioral therapy (CBT) and/or medications (x).

Antidepressants like Zoloft or Prozac may treat BED if the patient has underlying depression (x). Vyvanse is currently the only FDA-approved drug on the market that specifically treats severe binge eating disorder (x).

Treatment often combines pharmacological and psychological treatments to address underlying emotional issues that provoke and sustain binge eating to help the patient achieve long-lasting remission (x). For example, dialectical behavior therapy (DBT) is an effective method to treat compulsive binge eating. Studies have shown a six-month cessation rate of 59 percent (x). DBT attempts to help the patient adapt emotionally to stressors, to which the individual has difficulties adapting and uses overeating as an outlet.

Strategies for weight control do not specifically address any underlying causes of binge eating. But, combined with therapy and medication that aim to address mental health issues, it may help the patient practice more healthy eating patterns (x, x).

It is important to note that treatment for binge eating in itself is not necessarily a treatment for obesity or overweight. Likewise, treating obesity alone in a BED patient does not resolve the deeper causative issues that trigger binge eating disorder.

Supplements are not a direct treatment for binge eating disorder, but they may help to promote weight control in a healthy way. Always consult a doctor before adding supplements to your diet.

With antioxidant properties, African mango extract may be useful to treat obesity and diabetes and the oils may also reduce high cholesterol. Research suggests that it may also help relieve gastrointestinal symptoms (x, x). Take 1,200 mg (1/2 tsp) of African mango extract powder with at least 8 oz of water every day.

Green tea extract has a small but measurable effect on weight loss and may assist with healthy, consistent weight management (x). As a dietary supplement, take 500 mg (3/16 tsp) once or twice daily. It is not intended to be used longer than three months because high amounts of green tea extract EGCG may cause liver or kidney damage.

Garcinia Cambogia is known for its potential to help control appetite (x). The skin of the fruit contains hydroxycitric acid (HCA), which inhibits fat production and elevates serotonin levels. This produces feelings of satiety (x). As a dietary supplement, take 500 mg of garcinia cambogia (about 1/8 tsp) one to three times daily, unless a physician recommends otherwise.

Made from red raspberries, raspberry ketones may help prevent and reduce obesity and manipulate lipid metabolism (x). As a dietary supplement, take 300 mg of raspberry ketones (about 1/8 tsp) one to two times daily.

With caffeine and chlorogenic acid, green coffee bean extract is made from regular coffee beans before they are roasted. Chlorogenic acid slows the rate at which the intestines process carbohydrates, while caffeine boosts metabolism. Research shows that green coffee bean extract may be able to promote weight loss (x, x). As a dietary supplement, take 50 to 200 mg up to two times a day, unless a doctor advises against it. Use a milligram scale to measure the supplement accurately.

Glucomannan is a water-soluble plant fiber extracted from the elephant yam. When eaten it absorbs water and expands, promoting a sense of fullness. Some studies suggest that it may reduce body weight (x). As a dietary supplement, take 2 g of konjac root glucomannan (3/4 tsp) one to two times a day with at least 8 oz of water, 30 minutes before a meal.

According to a research study, CLA powder, a healthy trans-fat, seems to boost metabolism, reduce appetite and promote the breakdown of body fat. It may promote moderate weight loss (x). As a dietary supplement, take 2,000 mg up to three times a day of conjugated linoleic acid, unless a physician recommends otherwise.

Binge eating disorder (BED) is a condition with characteristics of eating disorders and compulsive disorders. It causes excessive, recurrent and harmful bouts of food consumption called binges. Other characteristics include stealing and hiding food, low self-esteem, lack of control over eating habits and feelings of guilt and shame about overeating. BED may cause further health complications such as obesity, diabetes, insomnia and high blood pressure. It may also cause complications with menstruation and pregnancy.

There is no known singular cause. Instead, research attributes it to a collection of risk factors including biological chemical imbalance, depression, anxiety and trauma. The best way to treat binge eating disorder is with a combination of medication and therapy to address underlying emotional risk factors and promote healthy eating habits. Although they are not a replacement for medical advice or treatment, supplements may help patients control their weight in a healthy way. Always consult a physician before experimenting with supplements.