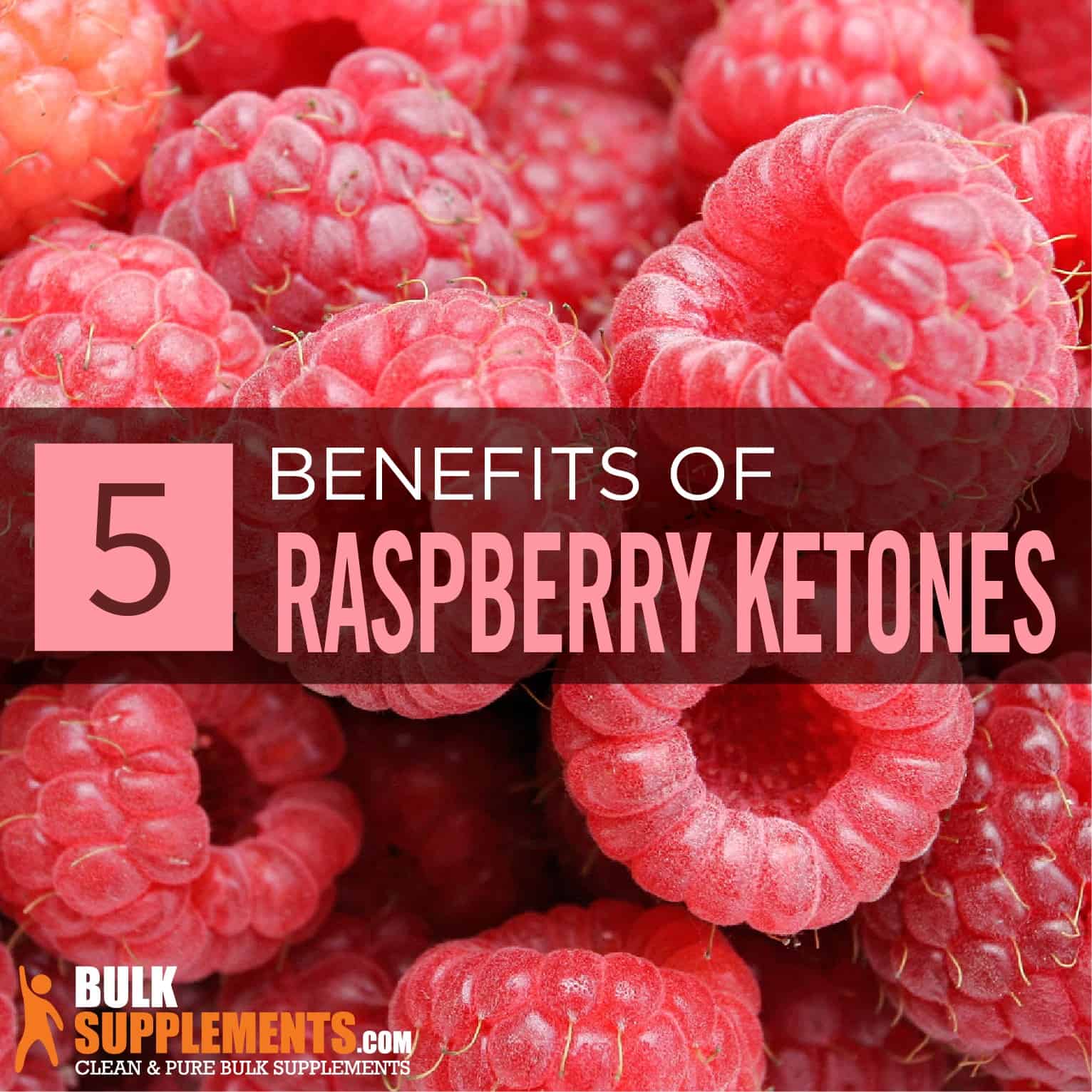 What are Raspberry Ketones?

If losing weight isn’t on your to-do list, you’re probably in the minority. Nearly 40 percent of Americans are obese, and another third are overweight (x, x). That leaves less than 30 percent who are maintaining a healthy weight. But shedding pounds is hard work, and with so much temptation out there, most of us can use a little help. Thankfully, raspberry ketones may be able to boost metabolism while burning excess fat.

Raspberry ketone is the compound in red raspberries that is responsible for their sweet, fruity aroma. The same chemical can be present in some other berries and fruits, including blackberries, cranberries and kiwis.

Before raspberry ketone became popular in health circles, it was particularly useful in the food and beauty industry (x). In fact, it’s one of the most expensive natural extracts out there. Raspberry ketone is a common additive in ice cream, soda and other foods, as well as in cosmetic products such as shampoo and moisturizer. Even if you’ve never eaten raspberries before, it’s likely you’ve encountered raspberry ketone at one time or other.

So, how can this supplement aid in weight loss? In essence, it encourages the production of a powerful hormone known as adiponectin. Research shows that the more adiponectin there is in the body, the less fat a person stores. Adiponectin regulates blood sugar levels and encourages the body to burn fat. People who maintain a healthy weight have much higher levels of adiponectin than those who are overweight or obese (x).

The statistics on obesity are not encouraging. More than 70 percent of Americans are overweight and more than half of those are obese. Despite these gloomy figures, diet aids like shakes, pills and herbal remedies abound. If you’re part of the majority and are looking to shed some pounds, raspberry ketone may be the supplement for you.

In a study involving raspberry ketone and other substances including caffeine, ginger and garlic, participants who took the supplement lost more weight than those who were given a placebo (x).

While men seem to suffer more than women from hair loss, women actually have about an equal chance of thinning or losing their hair. It’s most noticeable after age 50, but it can happen at any time.

The hormone adiponectin (which raspberry ketones can increase) plays a role in metabolism, but it also influences other growth factors, including those in hair follicles. A study using a raspberry ketone cream applied topically seemed to stimulate growth in participants who had suffered hair loss (x).

For those who are not obese, but are struggling to lose excess pounds (or keep them at bay), raspberry ketone can offer natural weight management by supporting healthy fat metabolism. Taking raspberry ketone stimulates the production of adiponectin, which aids metabolism (x). By maintaining a healthy metabolism, you can avoid developing a whole gamut of serious metabolic dysfunctions, including diabetes, fatty liver disease and cardiovascular disorders.

Hyperpigmentation is a skin condition in which patches of skin darken in an irregular pattern, changing the appearance of the skin. It may be due to sunburn or melasma, a disorder which is sometimes called ‘the mask of pregnancy.’ Ninety percent of people who contract melasma are women and it is believed to be due to hormonal changes. Other common examples of hyperpigmentation include freckles, age spots, liver spots and sun spots. The problem can be mild or severe, but this disfigurement can lead to loss of self-esteem and confidence.

Hyperpigmentation is due to an excess of the hormone melanin. Raspberry ketone shows promise as a skin lightener, both by lightening dark patches and evening skin tone. It works by inhibiting the production of melanin, which is also known as melanogenesis. By reducing the production of melanin, dark patches lighten. In research studies, raspberry ketone was able to lighten the skin in animals in just one week (x).

However, take caution when using raspberry ketone to lighten skin as it may work too well, hence contributing to leucoderma, a skin condition in which the skin develops white patches (x).

Wrinkled, sagging skin is one of the most obvious signs of aging. Collagen keeps skin looking young and firm, but unfortunately, collagen production starts to slow as early as our 20s. Through the same mechanism that stimulated growth in hair follicles, a topical application of raspberry ketone also allegedly increased skin elasticity and reduced the signs of wrinkles (x).

Raspberry ketone is already a popular food additive and thus is ‘generally recognized as safe’ by the FDA. However, extensive research on humans has yet to be conducted. Some mild side effects reported by individual users include jitteriness, increased blood pressure and rapid heartbeat.

The FDA has not established guidelines for taking raspberry ketone, but since it has been approved as a food additive, it’s considered safe to consume in moderate amounts. Take a dose of 300 mg once or twice a day. Some people find that higher doses work better, but it’s likely best to start with a lower dose and increase only if necessary.

If you’re pregnant, planning to become pregnant or breast-feeding, speak to your doctor before adding this or any other supplement to your diet.

The word ‘ketone’ makes many people think of ketosis, which is the fancy way of saying ‘fat-burning.’ The body burns two types of fuel — glucose and fat. Glucose is made primarily from carbs and sugar, but it can also be made from protein. Glucose gets used first by the body because it converts into energy more easily than fat. But when glucose is not available, the body reverts to fat. Fat that has been converted by the liver into a form that can be used for energy is called a ‘ketone’ (x).

Ketones and glucose are both used by cells all over the body — the brain being the biggest customer. The brain makes up only a small portion of our body weight. Amazingly, it uses about 20 percent of our energy (x).

It’s a common belief that the brain runs only on glucose, but this notion is false. The brain can and does use ketones for fuel (x). This function is basic to survival because the body can only store enough glucose to last a day or two. Fat storage, though, is unlimited (hooray?). Without the ability to use ketones, the brain would quickly shut down during times of famine. It seems like there’s a 24-hour convenience mart on every corner of the developed world nowadays, but for most of human history, food scarcity was the norm. We would never have survived without this ability to use a slow-burning fuel.

Going into ketosis from time to time is normal for our metabolism. For example, it’s common to enter ketosis while we are asleep because at that time, generally speaking, we aren’t eating. We may also go into a ketonic state while fasting or consuming a low-carb diet. Ketosis offers a ton of potential health benefits, from quick weight loss to better athletic performance to improved energy and overall health.

It’s important to note that while raspberry ketone may boost your metabolism, it will not, by itself, shift you into ketosis. For that to occur, dietary changes are necessary, either in the form of fasting or consuming a low-carb diet.

While there’s no miracle cure for weight loss, raspberry ketone is a natural compound that could help. It is also safe to consume in moderate amounts. While more studies are necessary, raspberry ketone combined with a healthy diet and regular exercise may provide the push you need to get yourself on track to a healthy weight.