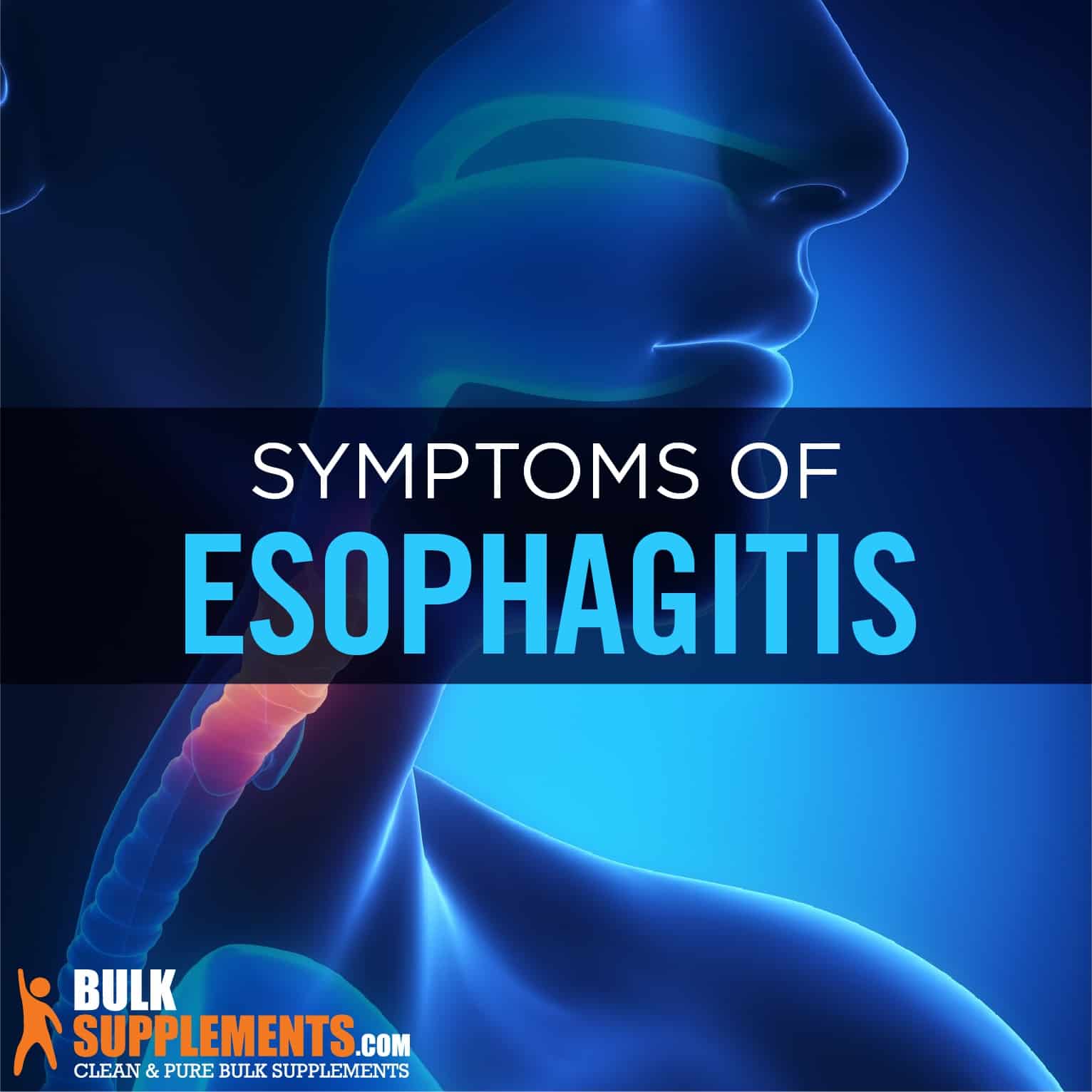 Esophagitis is a medical condition that involves the inflammation of the esophageal lining. The esophagus refers to the tube that is responsible for transporting food from the throat down to the stomach. The inflammation can result in damage to the tissues of the esophagus. This condition, which can be quite mild at first, can rapidly become particularly uncomfortable, resulting in problems like painful swallowing, chest pain, esophageal scarring and ulcers. In some cases, it can lead to severe reflux and a complication known as Barrett’s esophagus. The development of this can be a major risk factor for esophageal cancer (x).

Reflux esophagitis usually occurs due to the presence of a condition known as gastroesophageal disease, or GERD. This disease occurs as a result of acids found in the stomach regularly getting to the esophagus. The continuous backup of these acids and other contents in the stomach eventually cause irritation and also lead to inflammation of the esophagus (x).

This condition is mainly caused by fungi, virus, bacteria or other parasites. Infectious esophagitis is very rare and is most commonly present in people suffering from cancer, diabetes and HIV/AIDS. Due to the fact these conditions weaken the immune system, these patients are at significantly higher risk than the general population (x).

This type of esophagitis is mainly due to ingesting particular medications without water to wash it down. The medications then get stuck in the esophagus and stay there for too long. Some medications that can lead to this include doxycycline, tetracycline and clindamycin (x).

Eosinophilic esophagitis occurs as a result of excess eosinophils present in the esophagus. Eosinophils are a type of white blood cell. A high level of eosinophilia in tissues at the site of an infection can cause symptoms.

A large number of esophagitis symptoms are caused by various other conditions that affect the activities of the digestive system. It is easy to mistake the symptoms for something temporary.

If symptoms persist longer than expected or at the same time as flu-like symptoms, you should consider a medical consultation.

This condition is termed dysphagia. Those suffering from esophagitis may experience this either regularly or sporadically.

Heartburn is a burning pain in the chest and occurs just behind the breastbone. The pain often worsens with ingestion of food, especially in the evening or when in prone positions like lying down or bending over.

Generally, experiencing heartburn occasionally is no cause for alarm and can occur in otherwise healthy people for a variety of reasons. However, persistent and frequent heartburn can be associated with esophagitis (x).

Nausea simply refers to the feeling or urgent need to vomit. It can be either fleeting or persistent.

Nausea can be a result of psychological triggers such as fear or shock, or due to a physical cause like sea sickness or over-vigorous exercise.

Nausea can be caused by a range of diseases and allergies, as well as non-medical issues. However, esophagitis can also cause it. This wide range of causes makes diagnosing the cause of persistent and prolonged nausea difficult. Therefore, you must pay a visit to your general physician to carry out an examination (x).

Chest pain is a very common symptom and can occur in a variety of ways, ranging from a dull throb to sharp and stabbing pain.

Chest pain is a primary indicator of a heart attack. If you experience chest pain for more than a few minutes, or it comes and goes, seek medical attention immediately. This chest pain can feel like tightness, pressure or general pain (x).

Chest pain is a symptom of many things, including angina, panic attacks, and stress — so do not panic, but seek medical assistance to be safe.

If your chest pain is not of this type, or is chronic, then it may be related to esophagitis. Consult with your doctor to diagnose and formulate a treatment plan (x).

Esophagitis can be caused by a number of conditions, including some that are not common. This is why paying a visit to your doctor is important.

Candida is a fungus that lives in the human body. It is a yeast and can be found in places like the mouth and the belly. Usually, it is harmless and is dormant in these locations. However, when optimum conditions for multiplication occur, it can cause problems.

The infection caused by candida is called candidiasis. When this multiplication occurs in the mouth or oral region, it results in thrush and is more prevalent in adults with weakened immune systems and children. It can also be found in people who have cancer or diabetes. Upon spreading to the throat, it results in very painful swallowing (x).

This disease mainly occurs as a result of stomach acid frequently flowing back into the esophagus. This acid reflux could lead to irritation of the esophageal lining.

Many people experience acid reflux on rare occasions, but GERD can occur much more frequently. This leads to irritation of the esophagus (x).

Some other causes of esophagitis include ingestion of toxic substances or swallowing of foreign substances. Also, diets with high acidic contents or excessive caffeine could lead to esophagitis.

Treatment of esophagitis usually depends on the cause of the ailment. It could involve treatment with medication or surgery. In certain cases, changes in lifestyle could help too.

Chamomile has a history of assisting people in falling asleep and reducing anxiety. It may also help remedy some digestive issues. Chamomile has been discovered to have certain anti-inflammatory properties and may assist those with mouth ulcers.

Marshmallow root has traditionally been used to treat a variety of conditions including skin, respiratory and digestive issues. The active ingredient in marshmallow root is mucilage, which can be consumed in various forms. It may also reduce inflammation and relieve pain.

Other remedies that can be used include licorice, slippery elm and relaxation therapies. Acupuncture is sometimes used by sufferers in the belief that insertion of needles into certain points in the body can treat inflammation.

Esophagitis may share certain symptoms with some other ailments of the digestive system. It also has some very common symptoms of other ailments, which is why you shouldn’t jump to conclusions. Make an appointment with your doctor in order for you to undergo the necessary tests to confirm the diagnosis.

Many factors in esophagitis are lifestyle based, so minimizing these factors in addition to medical or home treatment may be the best option.