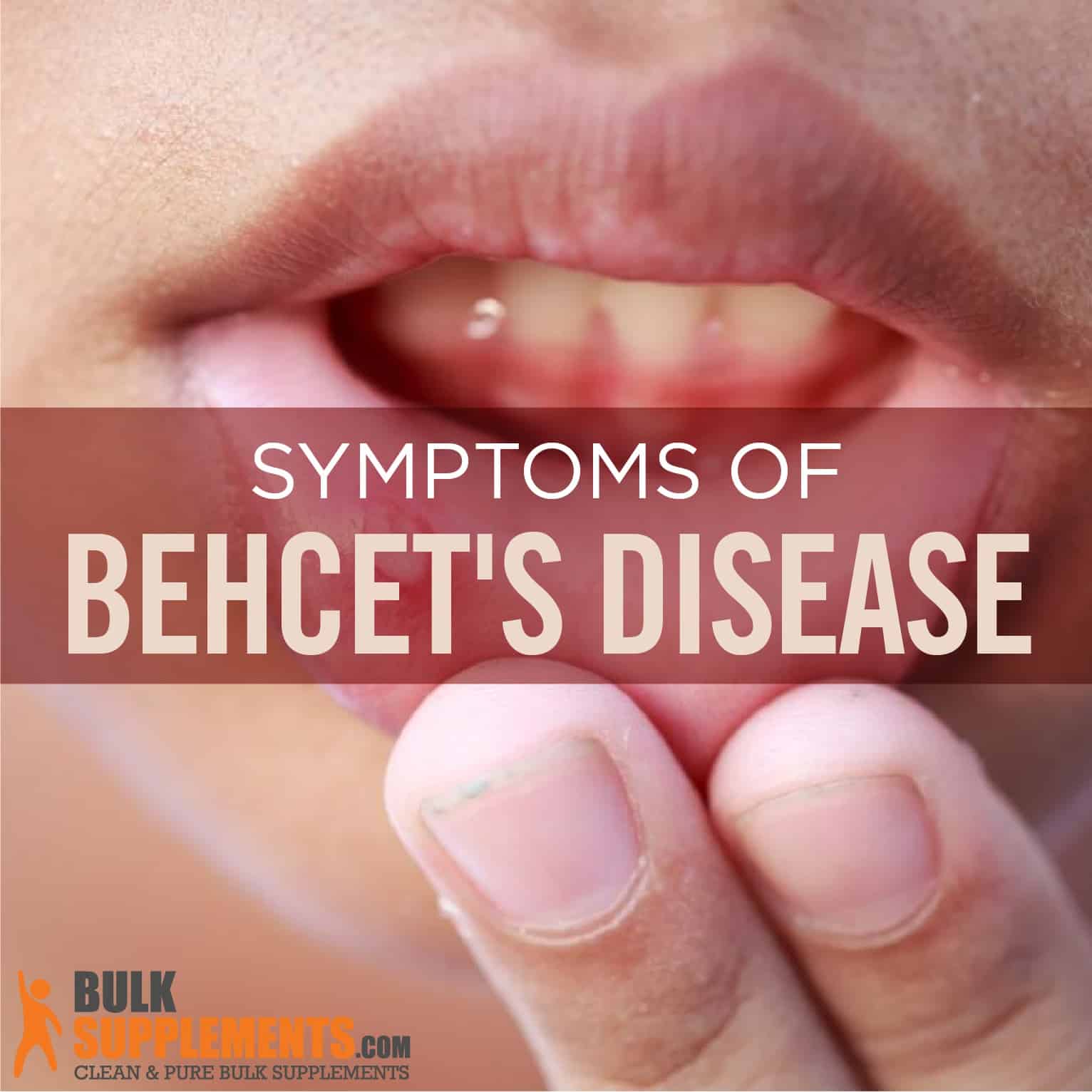 What is Behcet’s Disease?

Behcet’s disease (pronounced bay-setz), also called Behcet’s syndrome, is a rare condition characterized by persistent inflammation. Its cause is unknown, but experts believe that both environmental and genetic factors contribute to it.

Behcet’s disease typically starts in a person’s 20s or 30s, but it can occur at any time. It affects men more than women. While rare in general, it’s more common in the Far East and Middle East, particularly in Japan, Korea, China and Turkey (x).

This condition attacks multiple organ systems including the central nervous system, brain, eyes, skin, digestive tract and connective tissue. As a result, it can lead to impaired balance, movement and speech, as well as memory loss, intestinal complications, stroke, blindness and inflammation of the spinal cord (x).

No cure exists yet for Behcet’s disease, but the effects can be managed through a combination of medication, lifestyle and/or dietary supplements.

The symptoms of Behcet’s disease vary from one person to another. The disease can also disappear and recur by itself. Many of these symptoms are caused by inflammation of large blood vessels (vasculitis).

The most common Behcet’s disease symptoms include:

Symptoms can affect several areas of the body in the following ways (x):

The most visible sign of Behcet’s syndrome is painful sores in the mouth that resemble canker sores. They begin as round, raised lesions inside the mouth, but swiftly develop into painful ulcers. The sores typically heal within 1-3 weeks, but often recur (x).

People with Behcet’s disease might also develop open, red sores on their genitals, which usually occur on the vulva or scrotum (x).

Behcet’s syndrome may also cause various symptoms in the digestive tract, including diarrhea, rectal bleeding and abdominal pain (x).

Behcet’s disease may cause uveitis (inflammation in the eyes). Uveitis causes blurred vision, redness and pain in eyes. For people with eye symptoms of the disease, the condition may recur.

Repeated recurrences may then lead to partial vision loss or total blindness if the condition is not managed. In some cases, the first Behcet’s symptom may be eye abnormalities. On the other hand, ocular problems might not surface until years after sores develop in the mouth (x, x).

Skin issues can vary from person to person. Some people can develop red, tender, raised nodules on the skin while others can have sores that look like acne on their bodies (x).

With this condition, inflammation of blood vessels occur, causing many of the symptoms listed. In addition, vascular irregularities can cause blood clots with pain, swelling and redness in the legs or arms. Inflammation in the major arteries may also cause dangerous complications like aneurysms and blockage of the blood vessels (x).

Behcet’s disease can bring on inflammation in the nervous system and brain, resulting in fever, headache, meningitis, disorientation, stroke or poor balance. Over time, these symptoms of Behcet’s disease may improve or appear and disappear (x).

While rare, Behcet’s disease may affect the lungs. The disease may cause symptoms like shortness of breath, coughing and pulmonary artery aneurysms (x).

It’s thought that Behcet’s is an autoimmune condition, which means the immune system attacks the body’s healthy cells by mistake. In this case, the cells of the blood vessels are the target of the immune system. This leads to blood vessel inflammation and the other symptoms associated with Behcet’s (x).

There also seems to be a genetic component to the condition. Researchers believe that the HLA-B51 gene may play a role in the disease’s development. However, many people with this gene don’t ever display signs of Behcet’s. Therefore, it’s thought that exposure to things like certain bacteria, viruses and environmental factors when combined with a genetic predisposition determines who eventually develops the disease (x).

Other Facts and Figures

The disease is named after Dr. Hulusi Behçet, a Turkish dermatologist and scientist who first identified the symptoms as belonging to a single disease.

Behcet’s disease is less common in children and elderly people.

The disease is not infectious, so it can’t be passed from one person to another.

Behcet’s disease affects everyone differently, and its symptoms may worsen and subside over several weeks or longer.

Behcet’s disease doesn’t appear to be associated with complications during pregnancy. In fact, one study found that about 90 percent of pregnant women being observed were in remission during that time. However, the drugs used to treat active flare ups in these cases caused some complications (x).

Currently, Behcet’s disease has no cure. However, treatment can help manage symptoms for most people. Treatment can vary based on symptoms as well as how severe or mild they are and include prescription medications, lifestyle habits and dietary supplements.

While Behcet’s disease has no cure, there are some conventional therapies that can help ease symptoms.

Once you’re diagnosed with Behcet’s syndrome, a team of medical professionals will recommend treatment options for you based on your specific symptoms. The team may consist of a dermatologist, oral health specialist, rheumatologist, and an ophthalmologist, among others. Treatments include (x, x, x):

While the right diet to manage Behcet’s disease can vary from one person to another, eating anti-inflammatory foods is good for just about everyone. Decreasing inflammation is beneficial for managing Behcet’s disease.

According to the Vasculitis Foundation, you should eat the “rainbow diet every day”. In other words, you add more colorful vegetables and fruits to your diet and eat one of every color every day. They also recommend adding healthy fats to your diet, such as olive oil, olives, avocados, and walnuts while avoiding refined carbohydrates and refined sugar. Instead, eat whole grains such as barley, amaranth, bulgur, steel cut oats, and quinoa (x).

Apart from eating whole anti-inflammatory foods, here are other useful dietary tips that can help you decrease Behcet’s symptoms.

As with many health conditions, exercise can also be beneficial for Behcet’s disease. Getting physically active is particularly useful for people suffering joint pain and arthritis due to Behcet’s disease. It can also ward off further complications (x, x).

Because people with Behcet’s disease tend to have mouth sores, it’s vitally important that you look after your mouth well, which includes brushing and flossing regularly. It’s recommended that you use a probiotic toothpaste as it encourages healthy oral bacteria. In addition, oil pulling (an Ayurvedic remedy of swishing oil around the mouth for 20 minutes) (x) and flossing helps enhance oral hygiene. Keeping away from irritating agents like acidic, hard, crusty, salty, or spicy foods and alcoholic drinks is also suggested (x).

Zinc is renowned for its benefits to the immune system. Research shows that taking zinc by mouth can be a good way to treat Behcet’s disease and doesn’t appear to cause any undesirable side effects if taken as directed (x).

Use zinc sulfate as directed by your healthcare provider, or as instructed on the label. If it troubles your stomach, take it with food. Otherwise, take it with water.

Behcet’s disease (or Behcet’s syndrome) is an uncommon autoimmune condition. It damages the blood vessels and may result in recurring sores on the genitals and in the mouth, rashes, eye inflammation, and other symptoms. Additionally, the severity of Behcet’s disease varies from one individual to another.

There’s no known cause for Behcet’s, but current research shows that both environmental and genetic factors contribute to the disease. The disease isn’t contagious.

Common symptoms that indicate the likelihood of Behcet’s include mouth and genital ulcers that keep recurring, eye inflammation, and pain in the joints and skin. Behcet’s is a chronic disease, so symptoms may go away temporarily, only to reappear later.

Behcet’s disease treatment involves decreasing its symptoms and preventing severe complications, such as blindness. Symptoms can be controlled with medications, natural remedies, and lifestyle changes.