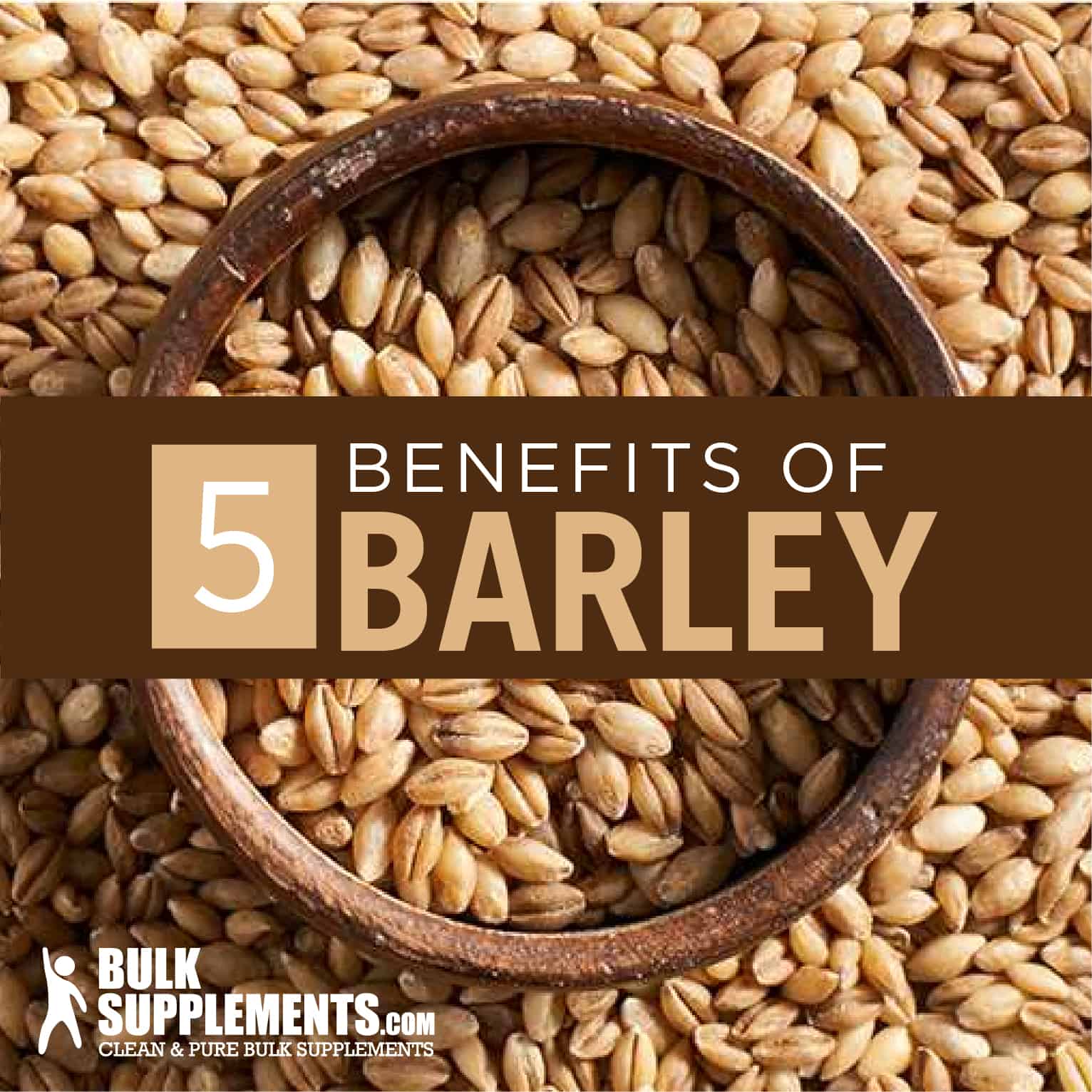 When you think of barley, do you imagine the nutty, slightly chewy little grains that sometimes appear in soup? Perhaps you never gave them much thought, but barley is actually a nutrition powerhouse!

Barley (Hordeum vulgare) is a cereal grain believed to be one of the first grains cultivated by humans. While it still grows in the wild, it’s now fairly common throughout the world for its vast nutritional benefits and applications. From the Americas to Europe, Africa, Asia and beyond, it’s hard to find a culture that doesn’t have a traditional dish or use for barley. Some use it in soups and stews or as an alternative to rice or pasta. Other even use it to make flour, teas and dietary supplements. And yes, beer.

There are two notable parts to barley — the grain and the grass. The grain can be cooked and eaten, fermented, made into meal or flour, powdered for supplemental purposes, or put through an extraction process. The grass can be consumed fresh, juiced, or powdered.

Does barley contain gluten? Yes, so if you have a gluten sensitivity or Celiac disease, be sure to avoid it.

No matter how you choose to consume it, barley is a superfood and provides innumerable health benefits backed by lots of research.

One cup of cooked barley contains about 10 grams of fiber (x). Compare this to the fiber in quinoa (5 g), oats (4 g) and wild rice (2 g) and it’s apparent that just on fiber content alone, barley is an amazing grain. But it’s not just the amount of fiber that is significant here–it’s the types of fiber.

Barley is an excellent source of both soluble and insoluble fiber. It’s especially rich in a type of soluble fiber called beta-glucan which, when consumed regularly, helps lower “bad” (LDL) cholesterol and triglycerides (x).

Another study reported that in men with moderately high cholesterol, a diet that included it resulted in a decrease in total cholesterol, LDL, and triglycerides as well as an increase in the “good” HDL cholesterol (x).

Besides helping to reduce cholesterol, the soluble fiber in barley helps to lower blood pressure, another major risk factor in cardiovascular disease (x).

There’s yet another benefit of consuming barley – chronic inflammation and oxidative damage contribute to the complications associated with heart disease. Studies suggest that the antioxidants in barley extract may  actually have vasodilatory effects on the vascular system and help protect cell health (x, x).

If you’ve ever eaten barley, you know it’s a “stick to your ribs” type of food. In other words, it’s really filling! Thanks to its high soluble fiber content, it contributes to a sense of satiety and reduces appetite (x). Additionally, both soluble and insoluble fibers promote bowel regularity.

A study from Japan found that when subjects with visceral fat obesity switched rice for high beta-glucan barley, they experienced significant reductions in body weight, BMI, and waist circumference (x).

If you need to lose weight, try swapping out your typical breakfast with a high-fiber, lower calorie option that includes barley. Less appetite plus better digestion is a winning combination for a healthy weight!

Choosing foods that stabilize blood sugar and minimize insulin spikes are important for preventing and managing metabolic disorders such as Type-2 diabetes. In one study, researchers gave 100 participants with impaired fasting glucose either oatmeal or barley flakes. The group given the barley flakes had a 9.27% decrease in fasting blood glucose and a 13.37% decrease in insulin (x).

Barley is also a great source of magnesium, chromium and selenium, three minerals that the body needs for blood sugar control (x, x).

Antioxidants are compounds that neutralize free radicals, the particles in our bodies that contribute to aging and disease. We can’t stop all free-radicals from forming, but we can combat them by eating antioxidant-rich foods.

Barley–particularly the greens–contains several nutrients including flavonoids, lignans and folate that protect cells against the damaging effects of free-radicals and may reduce the risk of conditions like heart disease and cancer (x, x).

May Protect Against Some Cancers

It’s too soon to say anything conclusive about barley and cancer, but some research suggests that the fiber and antioxidants in it can help prevent some cancers and inhibit tumor growth (x).

How to Cook Barley

Luckily for us, barley has among the best cost-to-nutrition ratio. It’s relatively inexpensive and very versatile.  Even a novice chef can pull together something delicious!

You’ll find two types of it in stores. Hulled barley is the whole grain with the only the outer hull removed; the inner hull is still intact. Pearl barley is polished to remove the inner hull. Both are extremely healthy.

Hulled barley takes 90 minutes to cook. Pearl barley takes 30-45 minutes. Jazz up the plain cooked it any way you’d like (search online for inspiration!) or add to soups and stews. You can also take barley grains and greens in supplemental form such as powders.

Barley Side Effects and Dosage

Barley consumed as part of a typical diet is considered safe for most people, including pregnant women. Pregnant women should avoid large amounts due to risk of contamination.

Those with gluten sensitivity, Celiac disease, or an allergy to cereal grains should avoid it.

If you have diabetes, talk to your doctor before taking barley extract, as it can affect your blood sugar levels. You may need to adjust your diabetes medications if you opt to add it to your supplement routine.

Avoid it for two weeks before a surgery to prevent blood sugar complications from occurring post-surgery.

As a dietary supplement, take 4 grams (just under 1 tsp) once or twice daily. If a physician suggests a different dosage, be sure to follow their instructions.

Barley has rightly earned its reputation as a superfood. Whether it’s the grain or the greens, the whole food or the extractions, studies have linked it to cardiovascular health, better glucose metabolism, weight management, even possible cancer prevention. Accessible and versatile, it has been a valued source of nutrition for centuries and will likely continue to be for centuries to come.