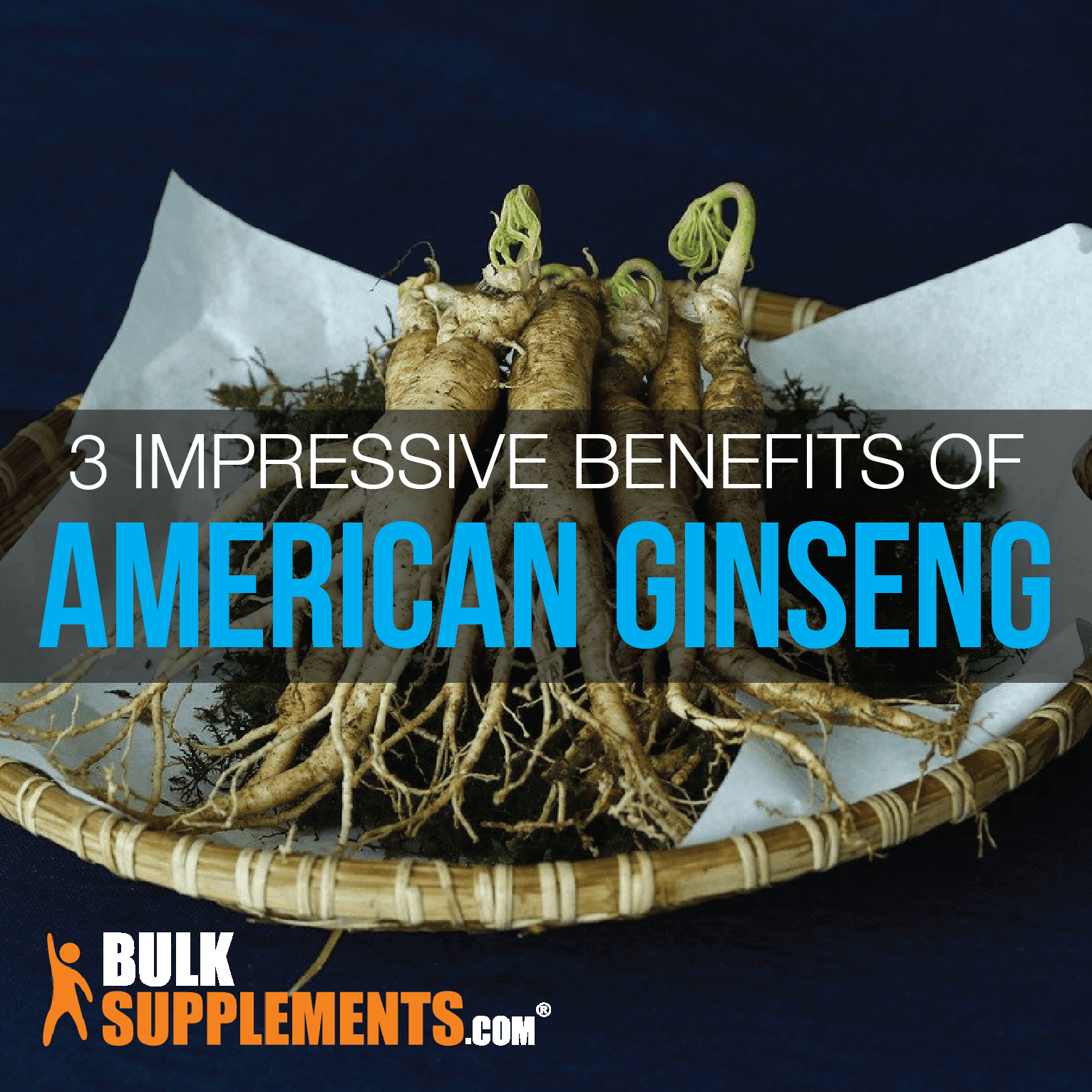 Do you know how American ginseng benefits the body? Most often, people consume the ginseng plant in tea. Studies suggest that it may help support cognitive function, increase energy and reduce inflammation. It may also have benefits in sexual function and immunity (x).

Some studies support its potential benefits. However, there is no concrete medical evidence that American ginseng benefits include curing, treating or preventing any disease or medical condition. Always consult a doctor before taking American ginseng or any other supplement.

What is American Ginseng?

American ginseng, or Panax quinquefolius, is a plant that belongs to the ivy family. It grows in the United States, mostly in the Appalachian and Ozark regions. It also grows in eastern Canada (x). It’s grown and harvested in up to 19 states but unfortunately, ginseng is a rare and endangered plant species. The plant is only grown on specific farms in those regions to protect it from logging, development and overharvesting (x, x).

American ginseng benefits include its availability in different forms, such as in tea, tablets and extract powders. The American ginseng root grows on ginseng farms in those regions, but most of it is exported to China. There are several varieties of ginseng, but American and Asian ginseng (Panax ginseng) are the most common.

How American Ginseng Benefits the Body

What is American ginseng used for? People have used the plant for centuries in traditional Chinese medicine and Native American healing practices. The root was introduced as a commodity in the American colonies in the 18th century (x, x).

Research also differs based on their potential health benefits. Asian ginseng may help boost the immune system and improve mental performance. There are other studies that suggest it may have had positive effects in cancer patients. However, there is not enough research to come to a definite conclusion on its efficacy (x, x, x).

According to research, American ginseng has antioxidant and adaptogen properties that may benefit:

Like we mentioned before, ginsenosides are one of the main active compounds responsible for  American ginseng benefits. Ginsenosides act as antioxidants, along with polysaccharide glycans (quinquefolia A, B and C) (x). These antioxidant properties may help protect the body against cell damage, disease, aging and inflammation (x).

Adaptogens are herbal substances that may help protect the body from physical, chemical or biological stress to maintain homeostasis, somewhat similar to antioxidants. They may help naturally increase antioxidant activity in response to bodily stress, which may help reduce oxidative stress and reduce the risk for damage (x).

Various studies suggest that plant-originated adaptogens may play an important role in human health. But any clinical application featuring adaptogens in healthcare products is still in its early stages (x).

The University of British Columbia, Vancouver conducted a study on North American ginseng extract to see whether it contained antioxidant properties. The researchers noticed that it seemed to exhibit antioxidant activity in both its lipid and aqueous mediums (x).

Similarly, researchers from the University of Chicago studied antioxidant properties in American ginseng extract and concluded that it is in fact a potent antioxidant. The substance seemed to protect cardiomyocytes (cells that generate contraction forces within the inner heart) against oxidant-mediated injury (x).

Various studies have used American and Asian ginseng to test its effects on fatigue. Two of its main chemical components are polysaccharides and oligopeptides, which may naturally reduce oxidative stress and assist in cellular energy production to help reduce fatigue.

Some studies tested its effects on mice and the results suggest that the ginseng root possesses anti-fatigue properties connected to oxidative stress and mitochondrial function. A lot of oxidative stress can lead to excessive generation of reactive oxygen species, which can damage cellular structure (x).

A study from Northeast Normal University also attempted to identify the active properties in Asian ginseng. The researchers administered a ginseng extract to mice for 15 days and conducted swimming tests. The subjects in the experimental group swam longer than those in the control group (x).

A similar study from Peking University International Hospital noticed that ginseng seemed to increase mitochondrial biogenesis factors in skeletal muscles in mice. Once again these results suggest that the root may contain anti-fatigue properties (x).

Perhaps American ginseng’s largest claim to fame is that it may potentially improve sexual health and address erectile dysfunction. Like we mentioned early, the ginseng root has properties that may protect against oxidative stress in the body, including the blood vessels. In this case, it helps produce nitric oxide and more ginsenosides to relax the muscles and promotes better blood circulation. In the case of erectile dysfunction, it may improve circulation to the penis. These ginsenosides may also increase libido and sexual potency and the herb may be an effective vitamin for erectile strength (x).

Animal studies identify positive correlations between ginseng and libido and copulatory performance, as well as sperm quality and quantity. In a study from the Asian Journal of Andrology, researchers treated rabbits with ginseng extract. The herb seemed to significantly reduce pre-contracted penile muscles (x).

The Journal of Reproductive Systems published another study in which researchers fed 5% ginseng to rats for 60 days. The results suggested a tremendous increase in blood testosterone levels (x).

Both forms of ginseng have earned a place in traditional medicine and research may suggest American ginseng benefits immunity as well. More than anything, the compounds in ginseng provide protection against viral respiratory tract infections, such as influenza. Studies show that the roots, stems and the extracts from ginseng leaves may help maintain immune homeostasis by enhancing the body’s resistance to illness.

A study published in the Oxford Academic of Pathogens and Disease found that ginseng seemed to reduce inflammation and slow the progression of inflammatory diseases in rats (x).

How to Take American Ginseng

American ginseng is available in various forms—powders, capsules and tablets—and you can also consume it in different beverages such as water and tea. Some people take it with other herbs to enhance its benefits, but make sure to consult a doctor before you take it (x).

But why take American ginseng as a supplement? Like we mentioned previously, the American ginseng root contains antioxidants that naturally support memory and cognition, immune function and sexual health. As a supplement, you may be able to experience these natural benefits. The recommended dosage for American Ginseng Extract is 1,000 mg once or twice a day, or as directed by a physician.

Possible Side Effects of American Ginseng

Although various traditional herbs may be relatively safe, they can contain chemicals that may have side effects, especially in combination with other herbs or medicines. It’s always a good idea to let a doctor know what herbs or supplements you’re taking.

Alongside American ginseng benefits is the potential for side effects. The extract is likely safe to take orally in appropriate doses in the short-term. Side effects may include (x):

Children should not take American ginseng as a supplement, unless under a doctor’s supervision. Similarly, it may be unsafe during pregnancy and breastfeeding, so it’s best to avoid it altogether (x).

Patients with the following health conditions or under the following circumstances should also avoid American ginseng extract (x):

Where to Buy American Ginseng

American ginseng is an herb people have used for centuries in traditional medicine. Research states that its compounds may improve immunity, cognitive function and sexual health. It also has antioxidant properties that may help prevent disease and aging. It is not intended to treat or prevent any disease or illness. But there are various studies supporting potential American ginseng benefits on health.