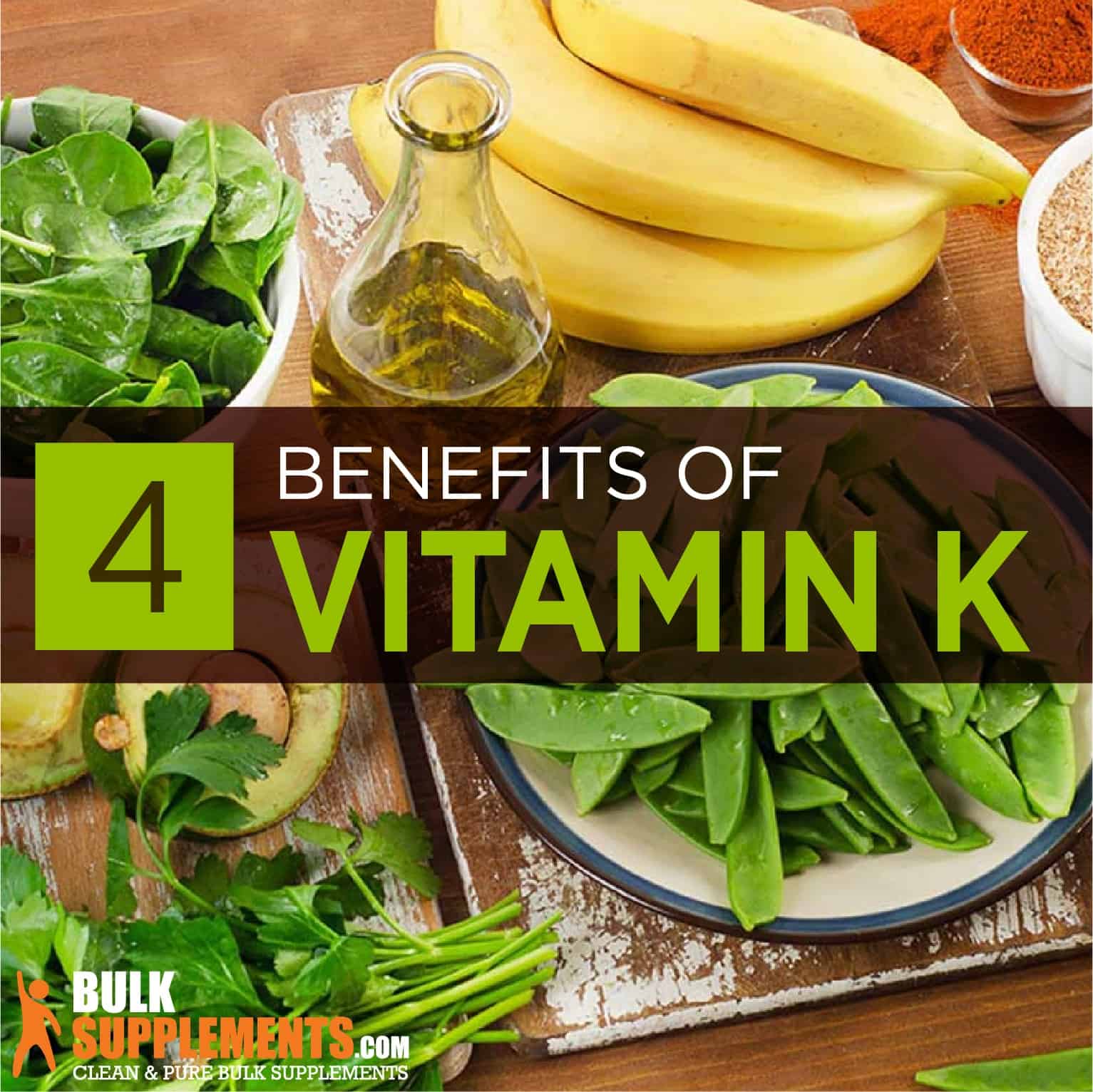 What is Vitamin K?

Vitamin K is a fat-soluble nutrient in animal meat and green leafy vegetables that plays an important role in the body. It is composed of different compounds with identical chemical structures. There are two vitamin K compounds — phylloquinone (vitamin K1) and series of menaquinones (vitamin K2) (x, x).

In addition, vitamin K also plays a role in bone growth and development. In studies, vitamin K supplementation has reduced the risk of bone loss and bone fracture. Aside from this, it may also improve heart health and support cognitive function.

Vitamin K1 (phylloquinone) is found primarily in plant food sources like green leafy vegetables because it is involved in photosynthesis. The liver uses and transports most of it. Humans consume about 75 to 90 percent of vitamin K1 a day. Even in abundance, the body absorbs it poorly, only about 10 percent (x).

On the other hand, vitamin K2 (menaquinones) is found in animal meat and other fermented types of food. The body also produces this vitamin through gut bacteria. Unlike vitamin K1, the body absorbs vitamin K2 more efficiently. Also, it can circulate in the blood for days, while K1 only stays in the blood for a few hours. The longer the vitamin stays in circulation, the more efficiently the body tissue can use it (x).

Further, vitamin K2 has two subtypes: MK-4 and MK-7. MK-4 is normally present in meat and dairy products, while fermented foods like soybean products, yogurt, Japanese natto and cheese are rich in MK-7. Experts consider these the most powerful and most important types of vitamin K2 in the body. MK-5 is typically a product of bacteria and present in fermented food, but MK-4 is the only form of vitamin K2 that isn’t a product of bacteria (x).

Patients can get vitamin K from various types of food. Vitamin K1 is in leafy green vegetables, such as raw kale, turnip greens, broccoli, collard greens, Brussels sprouts and spinach. It is also in vegetable oils and some fruits. Vitamin K2 is in animal meat and fermented products, such as chicken, eggs, cheese, ground beef and butter (x). Even though it is present in food, some patients may also require or choose to take supplements in order to treat a deficiency or to get a consistent and controllable daily dosage.

Vitamin K is responsible for keeping the body’s organs in optimal condition. Some of its benefits include:

To build strong bones, the body needs vitamin K to work with calcium. Typically, patients with high bone density have high vitamin K levels in the blood, while patients with low levels have lower bone density. This may increase the risk for osteoporosis (x). It mixes with other vitamins in order for the bones to develop properly and ensure that calcium is deposited in the bones.

In one study, researchers studied a sample size of women with hip fractures. The results stated a relative decrease in fractures after the women consumed 109 g of vitamin K in a day compared to women with lower vitamin K intake. According to the study, this measurement is equivalent to ½ cup of broccoli or 1 cup of endive (x).

In addition, it metabolizes calcium with vitamin D (x). Vitamin D, also called the sunshine vitamin, makes sure that the body has adequate calcium levels in the blood and promotes calcium absorption. However, vitamin D has no control where the calcium goes. Instead, vitamin K directs where the body should store the calcium. If the body stores it in the bones and teeth, it activates osteocalcin protein. To prevent calcium from accumulating in the blood vessels and kidneys, vitamin K activates another protein called matrix GLA.

Vitamin K is necessary for regulating the coagulation process and forming blood clots. After an injury, blood platelets stick together to stop the bleeding, which induces the wound healing process. It may prevent hemorrhages by regulating coagulation. Therefore, deficiency may cause abnormal bleeding (x, x).

As people age, the body is more prone to heart disease. For example, minerals may naturally accumulate in the arteries, which may increase the risk for hypertension (high blood pressure) or coronary artery disease. While it helps the body absorb calcium, it also prevents calcium from building up in the arteries and maintains proper blood circulation. According to research, patients with adequate vitamin K intake may have a reduced risk for cardiovascular conditions, like stroke (x).

Vitamin K may also have effective anti-aging health effects. For example, it may play a role in preventing Alzheimer’s disease, a form of dementia (x). It can help by guiding calcium deposits not only into the bones, but also into the brain. In one study, researchers studied the dietary intake of patients with early stage Alzheimer’s disease. They concluded that the patients consumed less of the vitamin than the control group. However, researchers need to conduct more studies to make a clear connection between it and cognitive function.

Vitamin K deficiency is not common among adults. However, newborns are more at risk. The primary symptom this deficiency causes is excessive bleeding (hemorrhage) because the body is unable to form blood clots (x, x).

Newborns may face a greater risk of vitamin K deficiency as a result of different factors (x):

Another cause of vitamin K deficiency is fat malabsorption, in which the body cannot absorb fat properly. Patients with fat malabsorption may have an associated condition such as an intestinal or biliary tract disorder, cystic fibrosis or celiac disease (x).

Physicians treat deficiency with vitamin K supplementation. Newborns require injections to reduce the risk for bleeding in the brain. Adults may use injections or oral supplements (x).

As a dietary supplement, patients need very little of it in their daily regimens. The recommended dosage for vitamin K1 1% powder is 10 mg a day, unless a physician recommends a different dosage. Always consult a physician before taking this supplement to confirm safety.

Side Effects of Vitamin K

Both types of it are likely safe for patients to take orally in appropriate amounts. Most of the time, it does not cause any side effects, but in some cases it may cause an upset stomach or diarrhea. According to research, it is most likely safe for pregnancy, breastfeeding and children (x).

However, patients with certain health conditions should take precautions, such as diabetes, kidney disease, liver disease or reduced bile secretion. It can cause severe interactions with blood thinning medication, so avoid taking these together. It may also cause moderate interactions with antidiabetic drugs because it may significantly reduce blood sugar (x).

There are two types of vitamin K: K1 and K2. This vitamin is responsible for blood clotting that prevents the body from bleeding excessively and promotes wound healing. It is a fat-soluble vitamin that reacts with other proteins in order to maximize its functions. Vitamin K has many potential health benefits, such as improving heart health, metabolizing calcium in the body and possibly supporting cognitive function. Without enough of it, patients can develop vitamin K deficiency. It is rare in adults and more common in infants. Signs include abnormal bleeding and easy bruising.

Vitamin K is present in common food sources such as green leafy vegetables, fermented foods and animal products. Patients may also choose to take vitamin K supplements to get a consistent, controllable dosage in their daily health regimens. It is likely safe for patients to take, but it is still best to consult a doctor before taking vitamin K supplements. It does not aim to treat any health condition, but it may have positive effects on overall health.