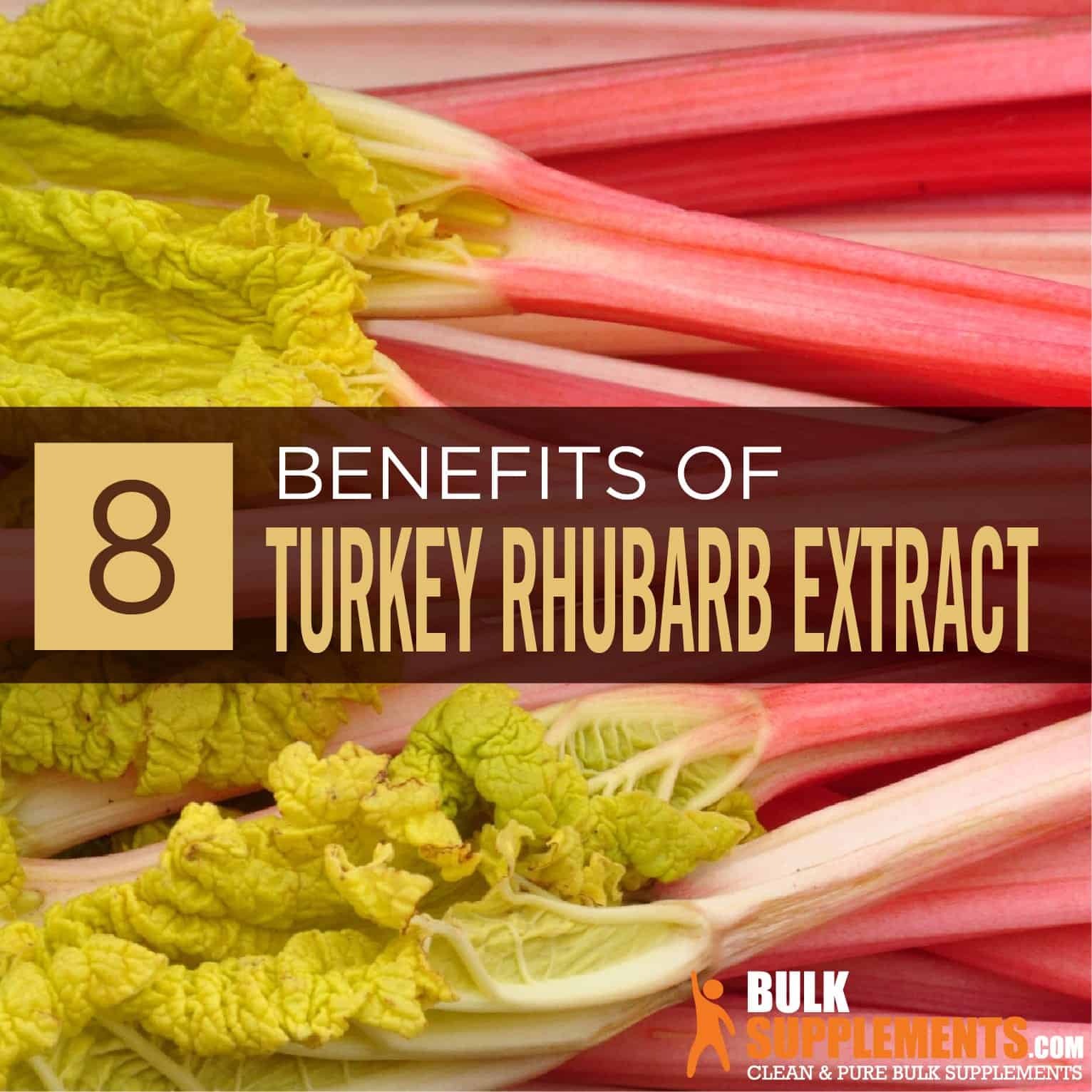 What is Turkey Rhubarb?

Known scientifically as Rheum palmatum or Rheum officinale, turkey rhubarb is a food and, at the same time, a medicinal plant. It is identified for its thick and sour stalk, which is cooked and added with sugar. It has a red to pink stalk with a pale green leaf that tastes like celery. Turkey rhubarb is usually grown in a mountainous and temperate place. This plant is popular in Northeast Asia, North America and Northern Europe. Some varieties of this plant grow in Western countries as a garden rhubarb (x).

This plant is identified by some researchers and by the U.S. Department of Agriculture (USDA) as a fruit for its sour to slightly sweet taste. Normally, rhubarb is used as a food ingredient or food cooked and sweetened with sugar. In North America and the United Kingdom, rhubarb is a traditional dessert and is often baked as a pie.

In other parts of the world, turkey rhubarb is called Chinese rhubarb (x) and Indian rhubarb. Typically, it is used for people who have digestive problems like stomach ache, constipation, swelling or inflammation of the pancreas and diarrhea. Women find rhubarb as an effective cure for menstrual cramps (dysmenorrhea) and symptoms of menopause. Though there is no specific scientific study or evidence that supports its medicinal effect, people continue using it.

Aside from being a nutritious fruit, rhubarb contains chemicals that are beneficial for people who have the following condition:

They are also known as fever blisters. It is characterized by small, fluid-filled blisters that grow on the lips or around it. This is a common viral infection and is contagious when in close contact with another person. According to a study conducted in 2001, rhubarb in the form of topical cream can serve as an anti-viral medicine.

In women, this is the condition that marks the end of their monthly menstrual cycle. This is accompanied by some symptoms like sweating, a quick change in their mood, fatigue, hot flashes and sleep disturbances. In some studies, the extract from the root of this medicinal plant provides relief to these symptoms.

This is identified as usual pain felt by women during menstruation, though it ranges from mild to severe pain. Some severe cases of menstrual cramps even cause women to feel lower belly and backache. The root extract of this plant is taken orally and also used as a herbal medicine in this case.

The pancreas is the body organ that’s responsible for producing insulin, which in turn helps in the conversion of food to fuel the cells. Pancreatitis occurs when it swells due to smoking or high alcohol intake. The rhubarb extract, as an alternative anti-inflammatory medicine, may help if taken orally.

Rhubarb is used to cure gastrointestinal disorders and digestive issues. In a study conducted in 2014, it was found that rhubarb contains tannins that help in regulating the water absorption of the digestive tract, aiding the prevention of diarrhea. Rhubarb mixed with Glauber’s salt can help relieve constipation. It can also be used as a laxative during indigestion.

A study in 2014 has shown Traditional Chinese medicine rhubarb root partnered with rhizome has shown positive effects in treating ischemic stroke. An extensive study is needed to confirm this claim, however, many people suggested that they feel better while taking this compared to just taking a typical stroke treatment alone.

Some studies claim that rhubarb extract, if taken one to three times a day for three months daily, can decrease body weight.

According to some studies, eating rhubarb stalks for four consecutive weeks may lower the cholesterol levels of people diagnosed with high cholesterol.

Side Effects of Rhubarb

The side effects of Rhubarb are somehow dependent on how long a person has consumed it as a medicine. Rhubarb stem, when taken in the form of food, is considered to be safe. In addition, rhubarb roots and rhizome, if taken in the form of medicine in the right dosage for four weeks, is still possibly safe. Meanwhile, the rhubarb leaves are not particularly safe to eat since this part contains oxalic acid, which may cause stomach ache, nausea, burning of the mouth, vomiting and seizure (x).

Rhubarb is still safe when applied to the skin for 14 days. However, there are several claims that consuming rhubarb for a long time may result in bone loss, muscular weakness, irregular heart rhythm and potassium loss.

There are special precautions when it comes to taking rhubarb extracts:

Not Safe for Kids

This herbal medicine is not safe for children because of its high amounts of oxalic acid. Taking this medicinal plant may cause oxalic poisoning to children. Rhubarb is also considered unsafe for babies when taken in higher amounts than what is found from the breast milk that they are fed (x). Pregnant women should avoid taking the supplement.

Too much intake of rhubarb may cause constipation and diarrhea because of the plant’s high oxalic acid content.

Rhubarbs can produce laxative effects when taken in high dosages and may also work as an astringent tonic to the digestive system if consumed in smaller doses. The roots of the said plant can be a treatment for hemorrhoids, chronic constipation, liver issues, menstrual problems, gall bladder complaints, diarrhea, and skin eruptions due to the accumulation of the toxins inside the body. This treatment, however, is not advisable for pregnant and lactating mothers or patients diagnosed with intestinal obstructions.

Rhubarb can also be used as an external treatment for burns.

Patients with sepsis are given crude rhubarb extract of up to 9 grams in powder form. (x) Also, those who undergo radiation therapy are suggested to be given 20 mg/kg for 6 weeks. 50 mg/kg is the dosage given for patients with atherosclerosis for 6 months.

Patients with blood stagnation (also known as Oketsu in Oriental medicine) are given long term dosages (12 months) of rhubarb extract in Kampo medicine (replication of Chinese medicine in Japan). While people with lazy bowel movement syndrome are given short term dosages of about 2 weeks.

Many countries have been using rhizomes and the roots of rhubarb in their culture for a long time. Gut, kidney and liver protection to reducing inflammation and fighting infections are some of rhubarb’s numerous benefits according to scientific studies. Rhubarb is also a common and effective remedy for relieving menstrual cramps and many symptoms of menopause in women. Some claim that the medicinal plant boosts positive moods and reduces anxiety among women.

Rhubarb is generally safe when taken in small amounts, although it can cause few side effects. However, some studies show that rhubarb should not be used with other medications as it may cause some severe damage to various body organs. The leaves of rhubarb should not be consumed because of the toxic amount of oxalic acid present in them.