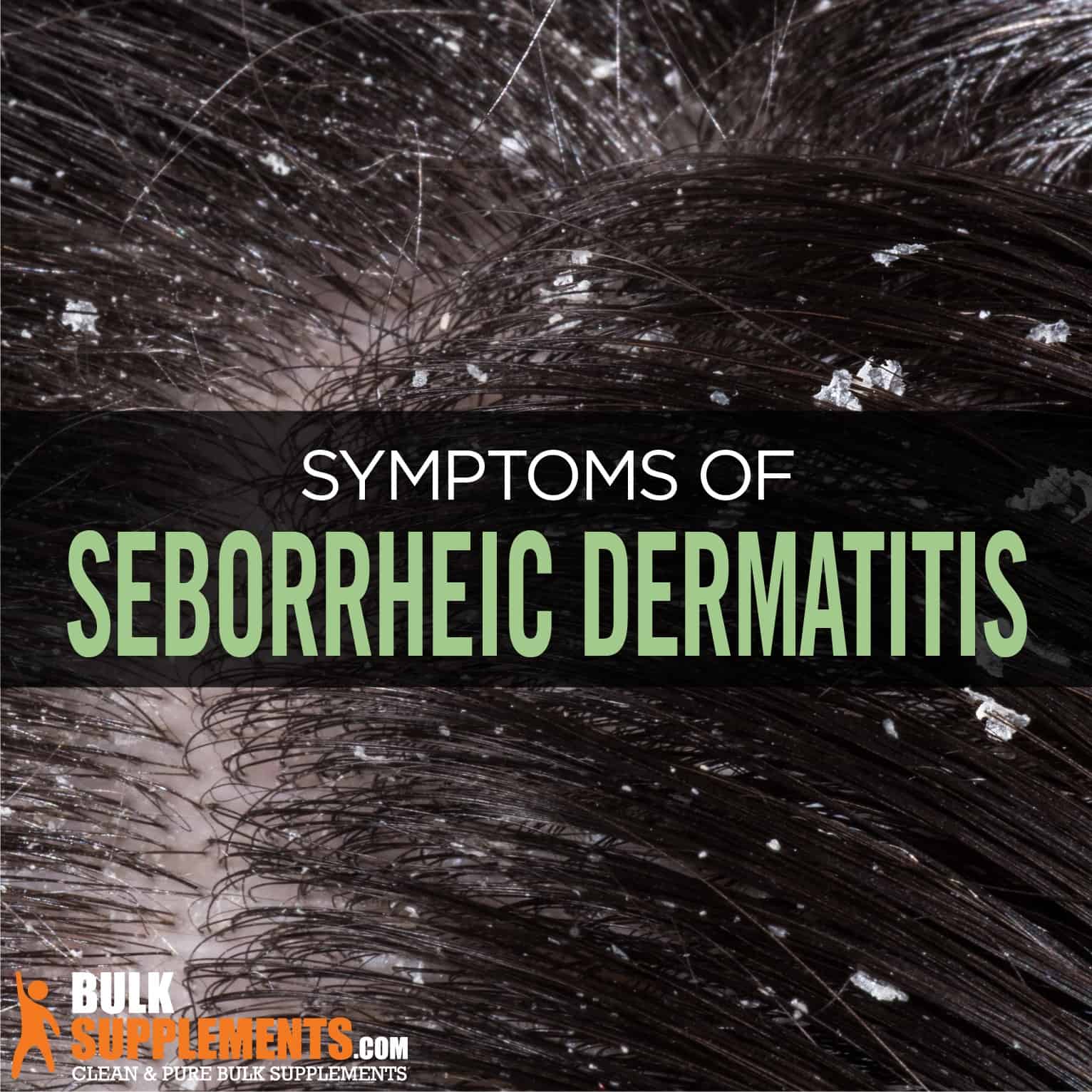 What is Seborrheic Dermatitis?

A flaking, itchy and inflamed scalp may seem like dandruff or eczema, but it could actually be a case of seborrheic dermatitis (SD) — a related but slightly different condition. SD describes a distinct type of eczema that affects areas of the head and trunk that have a high concentration of oil glands, skin folds or hairs (x).

Symptoms can be very distressing and usually appear in people between the ages of 30 and 60. SD affects about 3 percent of the general population and up to 83 percent of those with weakened immune systems due to factors like HIV, cancer or drugs (x).

The milder form of SD — dandruff — often appears during puberty and can go away with age. For some people, though, it may be a lifelong condition. Males experience dandruff a little more often, possibly because they have larger sebaceous glands on their scalps (x). Another form of SD called “cradle cap” only affects infants and usually resolves on its own (x).

SD and dandruff respond to the same treatments. Unfortunately, symptoms often recur (x). This is a frustrating reality for those who deal with these conditions but a combination of diet, topical treatments, and dietary supplements can help keep symptoms under control.

Psoriasis can look like SD but is different in that it produces thicker, drier scales that may affect the elbows, knees, hands, feet and nails as well as the scalp. The cause of psoriasis is believed to be autoimmune and therefore is treated differently from SD (x).

Unlike other forms of eczema, SD isn’t caused by an allergic reaction (x). The root cause of SD remains unknown but several factors may play a role.

A recent study suggested that the cause of SD may be a whole-body condition, and not just limited to the visibly affected skin areas. For example, people with dandruff have higher levels of various naturally present bacteria and fungi all over their skin. This increase may change the whole-body immune system’s response and damage the skin’s protective barrier (x).

Specifically, research shows that people with SD and dandruff have higher numbers of Malassezia yeast, a fungus everyone carries on the skin. This overpopulation, or individual immune system response to it, may skew the normal fungal and bacterial population balance on the skin, thus triggering SD (x, x, x).

People with SD also tend to have larger populations of the yeast Candida albicans in their bodies. Their immune systems may react similarly to both Malassezia and Candida. Significantly, antifungal medications improve SD in some people (x).

In addition to yeast, people with SD often have high numbers of the infectious, toxin-producing Staphylococcus aureus bacteria on their skin. This may, along with Malassezia, play a role in the development of SD (x).

Environmental and emotional circumstances can bring about flare-ups of SD. Known triggers include:

“Cradle cap” describes SD that occurs in infants. Despite the name, it can affect other areas of the body like the face, skin folds, and diaper area. While it may look uncomfortable, it’s not believed to cause babies any distress. To treat it, the scales can be gently brushed after being softened with a mild shampoo. Topical treatments can also be recommended by a pediatrician (x).

Treatment of SD includes reducing inflammation, controlling fungal populations on the skin, and improving skin and scalp health (x). Prescription treatments for SD include special shampoos and creams, corticosteroids, immune suppressants, antifungals and sulfa antibiotics (x). While they provide relief, they do not cure SD, and Malassezia populations tend to revive (x). Because of side effects, medications such as antifungals, corticosteroids and tar cannot be used long term (x, x, x).

Alternatively, specific dietary changes and the use of natural remedies can help limit fungal and bacterial overgrowth and reduce SD symptoms.

As with all supplements meant to promote general well-being, the remedies listed here are by no means a substitute for legitimate medical advice. It’s always best to talk to a doctor if you are experiencing problems with your health before taking any supplements.

Many studies show that dietary changes can have a beneficial effect on SD as they affect weight, blood sugar, and skin conditions. Certain foods, like sugar and processed foods for example, exacerbate inflammation and fungal growth. By contrast, low-sugar and plant-based foods can help combat them (x, x, x, x).

Foods to avoid or limit:

The root of the ginger plant, Zingiber officinale, is related to curcumin and known for its many health benefits. It can be applied to the skin or taken by mouth. In studies, it was noted that:

Possible side effects: Applying ginger to the skin may suppress local hair growth or cause a rash.

Warnings: Take with water to avoid heartburn. Ginger may lower blood sugar. Diabetics and pregnant or nursing women should consult with a physician before using it.

Garlic, the bulb of the Allium sativum plant, contains various beneficial compounds as well as vitamins and antioxidants. Studies found that:

Possible side effects: Pungent breath, stomach upset, gas buildup or other gastrointestinal problems. Applying garlic to the skin may cause irritation, burns or sores.

Warnings: Excessive garlic can interfere with protease inhibitors. Pregnant or nursing women, diabetics, people scheduled for surgery and those taking blood thinners should consult with a physician before taking a garlic course.

Curcumin is a compound in turmeric powder which is the ground root of the Curcuma longa plant. It is closely related to ginger. In India, curcumin is a traditional remedy for dandruff, various other skin conditions and removing unwanted hair (x, x, x). It can be taken by mouth or applied to the skin. In studies, research posited the following:

Possible side effects: Applying curcumin to the skin can cause local hair loss.

Warnings: Take with water or a meal. The powder may stain surfaces and fabrics. Pregnant or nursing women and people with blood-clotting problems or who are taking blood thinners should not use curcumin. When first taking it, people with gastrointestinal disorders or sensitive stomachs may experience stomach upset. People with a ginger allergy should consult with a physician before taking it. Anyone with high blood pressure or unstable blood sugar levels should exercise caution before using it.

Fish oil is the only source of omega-3 fatty acids which are easily absorbed by the body. Fish oil capsules are considered safe by the U.S. Food and Drug Administration. They are free of mercury contamination as this chemical is absorbed by fish tissue, not the oil. In studies, it was found that (x):

Possible side effects: Overuse may cause diarrhea, heartburn and stomach upset.

Warnings: These supplements should be immediately refrigerated. People who are allergic to fish or taking blood thinners should consult with a physician before taking fish oil.

SD symptoms can be distressing and also difficult to treat. As an alternative to medications with unpleasant or serious side effects, natural remedies are generally safe to use and can reduce symptoms. Certain dietary changes have also been proven effective in improving symptoms and reducing the risk of flares.

By Sukriti Taneja
About the author