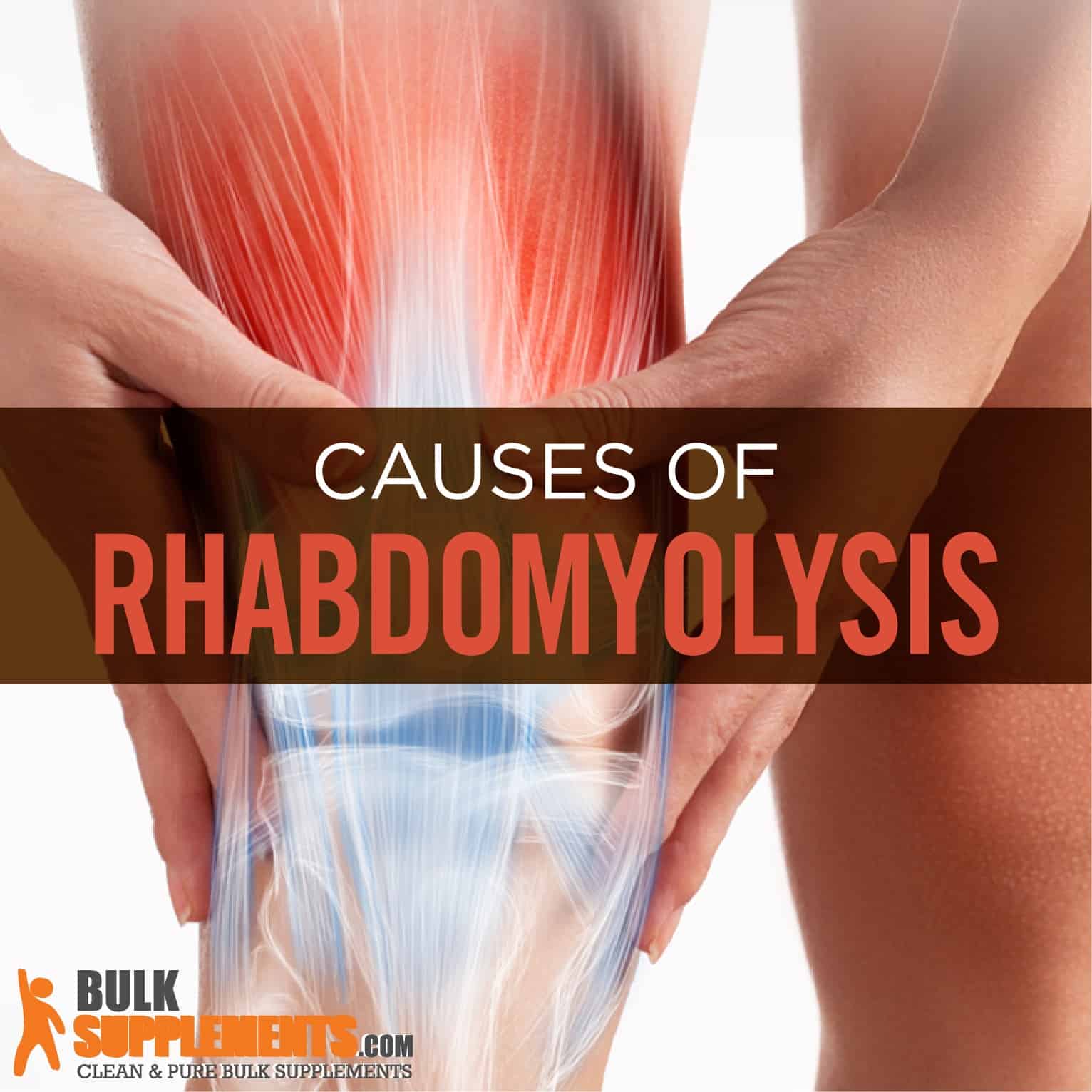 Rhabdomyolysis, or rhabdo for short, occurs when damaged muscles begin to break down and discharge contents of muscle fiber into the bloodstream. This may cause kidney damage (x). The condition is quite rare, with only around 26,000 cases reported every year in America (x). Men are at a slightly greater risk of getting rhabdomyolysis than women.

Athletes who train too hard are at great risk of developing rhabdomyolysis. When exercise is too intense, the muscles might not receive adequate oxygen and will begin to swell, break down and then burst (x). The breakdown of muscles releases proteins that may potentially damage the kidneys.

In addition to overexertion, other potential rhabdo causes include crush injuries, drug use, certain medications, seizures and severe dehydration.

The complications of rhabdomyolysis are determined by severity and several individual factors. Less serious cases hardly cause any obvious symptoms and may only be detected through blood serum tests. However, severe cases often lead to severe muscle pain and may be life-threatening.

Symptoms of rhabdomyolysis can include (x):

When muscle damage occurs, myoglobin protein is released into your blood. The kidneys then filter it from the body. Myoglobin disintegrates into substances that may destroy kidney cells.

Rhabdomyolysis may result from injury or any condition that destroys skeletal muscle. Factors that may contribute to rhabdomyolysis include:

Muscle necrosis more commonly happens after walking downhill than after climbing uphill. The combination of hypoxemia, corticosteroid-induced muscle disease and muscular exertion may cause muscle tissue destruction in people with status asthmaticus (x).

Embolism may also cause muscle necrosis if there’s prolonged deprivation of oxygen (x). Acute renal failure happens only if a vital muscle mass has turned necrotic, such as during generalized shock, after various diffuse emboli or after complete vascular occlusion involving one or more limbs.

Trauma-induced rhabdomyolysis is largely due to occupational or traffic accidents. Muscle compression may also be caused by abuse, torture or longstanding confinement in one position — think surgical procedures requiring certain positions for prolonged periods, coma, psychiatric conditions and orthopedic problems.

Excessive body temperature can cause muscle damage. Neuroleptic malignant syndrome is one trigger for hyperthermia-induced rhabdomyolysis. It’s characterized by severe fever in people treated with haloperidol or phenothiazides (x).

Malignant hyperthermia is another possible cause — an inherited disorder that’s characterized by a swift increase in body temperature, usually after anesthesia with succinycholine or halogenated hydrocarbons (x). Due to excessive sweating, people with malignant hyperthermia also often have hypokalemia, which can worsen damage to muscles.

Lightning strikes and high-voltage electrical injury cause rhabdomyolysis in around 10 percent of people surviving the original accident, even if they have small wounds at the point of entry (x).

Perhaps the most common cause of drug-related rhabdomyolysis these days is the use of medications known as HMG-CoA reductase inhibitors. These drugs must be withdrawn immediately if the patient complains of muscle issues or if cytokeratin levels rise to over three times above regular levels.

In people with chronic or acute alcohol intoxication, muscle damage is caused by a combination of direct muscle cell damage, immobilization, hypophosphatemia, hypokalemia or agitation (x).

Rhabdomyolysis due to toxin exposure is noticed not only after quail intake, but also after eating certain species of fish (Haff disease) (x), or after coming into contact with various insect and snake venoms (for example, spiders and hornets).

Exceptional rhabdomyolysis cases are inherited conditions that are all characterized by failure to deliver energy to muscles due to defects in nucleoside, glucose, lipid or glycogen metabolism. These conditions usually originate in childhood and may be present if myoglobinuria or muscle weakness recur frequently, or occur alongside events that may not cause rhabdomyolysis in healthy individuals (x).

Most often, the last common route leading to disintegration of muscles is poor delivery of ATP (adenosine triphosphate), which makes it impossible to maintain cell integrity. Viral infection, fasting and exertion are aggravating factors.

Hypocalcemia, hypokalemia, hyponatremia, hypophosphatemia and especially hyperosmotic and hypernatremia disorders have all been linked to rhabdomyolysis.

Alcohol-induced muscle cell damage is partly associated with electrolyte abnormalities (x), but severe illness and malnutrition can also cause electrolyte issues that cause rhabdomyolysis. Hypophosphatemia and hypokalemia disappear after renal failure and myonecrosis have occurred. Therefore, their role in causing rhabdomyolysis is often ignored.

Rhabdomyolysis symptoms warrant a visit to the emergency room and should be dealt with urgently. Even people with symptoms that don’t include cola-colored “brown pee” might have rhabdomyolysis.

But the good news is that quick diagnosis and treatment (often involving higher IV fluid levels) can often return the body to balance without lasting damage.

Rhabdomyolysis complications may be extremely serious and even fatal, so proper identification and prevention of symptoms is vital. Common “early” complications include severe hyperkalemia, which may lead to a cardiac arrest. The most severe “late” complication is acute renal failure. It affects around 15 percent of rhabdomyolysis patients (x).

In all cases of suspected rhabdomyolysis, avoiding acute kidney injury is the most important goal of treatment.

As such, management of the disorder includes aggressive and swift replacement of fluids with saline, removal of causative agents and resolution of electrolyte abnormalities, as well prevention and treatment of any complications that may follow.

Rhabdomyolysis treatment depends on how severe the symptoms are, and the presence of further health complications that can raise the likelihood of kidney injury. In serious cases, damage to the kidney can be irreversible if not treated early (x).

A blood transfusion involves receiving parts of or whole blood via an IV. To ensure it’s safe, blood is screened for diseases, including HIV and hepatitis.

Huge quantities of IV fluid remove substances through the kidneys. Medications can be included in the fluid to flush out toxic substances and remove extra fluid. They can also help reduce your urine’s acidity.

Fasciotomy is a surgical procedure that removes tissues that cover the muscles. This reduces pressure on nerves and blood vessels caused by the swelling of damaged muscle.

Dialysis helps clean blood when the kidneys can’t. Chemicals, waste products and extra water are flushed out of the blood by a dialysis machine or dialyzer.

Adding the following supplements to your daily diet can support the health of your kidneys and give you the edge over chronic kidney disease and other kidney issues.

Dandelion has long time been an effective natural diuretic (x) as the tea reduces water retention by encouraging urination. In fact, a pilot study of 17 subjects found that dandelion increased the volume and frequency of peeing for up to five hours (x).

The recommended dose for dandelion is 1,000 mg, taken twice a day or as otherwise advised by a doctor.

Marshmallow contains diuretic qualities, which help increase urination. This helps your body cleanse the bladder and kidneys to decrease mineral and toxin deposits.

Juniper berry is a highly rated kidney tonic. Its oil extract is believed to have a diuretic effect, which promotes urination. It helps decrease water retention (edema) and lower blood pressure. The oil also has antiseptic properties.

Talk to your physician about the right juniper berry extract serving size for you.

A 2002 study showed that parsley extract powder is packed with vitamins and antioxidants that can help to flush the kidneys naturally (x). For hundreds of years now, it has acted as a diuretic that fights off gallbladder stones, kidney stones, urinary tract infections and bladder infections.

Take 2,500 mg of parsley extract powder per day, or as recommended by your physician. Parsley is best taken with food.

Red clover tea contains mild diuretic qualities, which means it boosts urination to help get rid of excess salts, fats, water and toxins from the body, thus relieving the workload and strain in the kidneys and liver (x).

Take 1,500 mg of red clover extract powder daily with water or food, or according to your physician’s directions.

The phenolic substances in ginger are believed to help ease gastrointestinal irritation, encourage bile and saliva production, and stifle gastric contractions as fluids and food move through the gastrointestinal tract.

Take 1,000 mg of ginger root extract powder once a day, or as suggested by your physician.

Goldenrod is a natural diuretic (x). It encourages both reduced water retention and urination in the body. This helps to get rid of renal deposits, which could otherwise progress to become kidney stones.

Talk to your doctor about the right goldenrod serving size for you.

A typical sign of rhabdomyolysis is this trio of symptoms — muscle weakness, muscle pain (particularly in the thighs, lower back or shoulders), brown or dark red urine (resembling tea), or reduced urine output.

But some individuals with rhabdomyolysis might not have muscle-related symptoms. Patients can also experience nausea and vomiting, abdominal pain, fever, confusion, rapid heartbeat, loss of consciousness or dehydration.