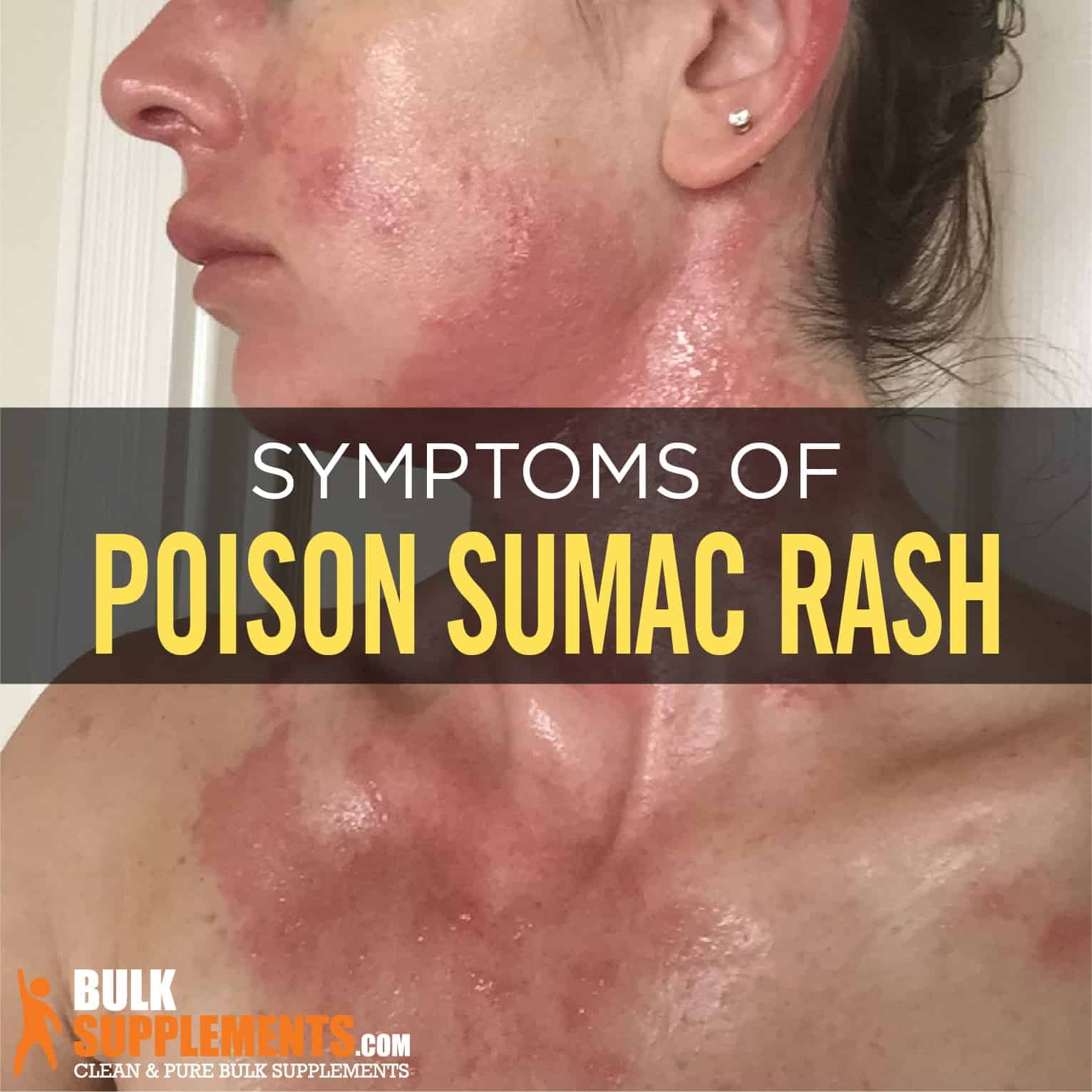 What is Poison Sumac?

Poison sumac is a woody shrub mostly found in swamps and wet areas of the northeastern and southern United States. Poison sumac (Toxicodendron vernix) also inhabits pinewoods and hardwood forests. It is related to poison oak and poison ivy plants, which is why the three plants cause a similar skin rash. However, it looks different in terms of presentation from the other two. It has green leaves that are oval shaped and are generally smooth (x).

Poison sumac causes a rash that occurs when an individual comes into contact with urushiol, an oil found in the plant. Poison ivy and poison oak also produce the same poisonous oil. Researchers believe that approximately 85 percent of all individuals are allergic to urushiol. Most of the skin rashes that result from such poisonous plants occur due to an allergic reaction, particularly the type known as contact dermatitis. The rash forms on the skin within one to three days and it appears on any part of the body that has come into contact with the plant. The symptoms of this rash may last for weeks.

Poison sumac is more similar to poison oak and poison ivy. These two plants also cause a rash, but their appearance is different from poison sumac.

Poison oak is mostly found as a small bush or as a climbing vine in the West or the Rockies. It is characterized by smooth-edged leaves that appear in a cluster in groups of three, five or seven.

This plant is commonly found east of the Rocky Mountains. It grows as vines or shrubs. Its leaves can have either notched or smooth edges and they are often clustered in groups of three.

Poison sumac is typically present in wetlands, swamps, hardwood and pinewood forests. Poison sumac can often be found along the Southern and Eastern quadrants of the United States (x). It is abundant along the swampy regions of the Southeast and the Mississippi River (x).

The plant is characterized by the following aspects.

The most common and noticeable symptoms associated with coming into contact with a poison sumac tree is developing a red and itchy skin rash. The rash can appear within hours of exposure, but can also appear days later. It can last for weeks — usually three weeks at most. The rash is due to a reaction known as contact dermatitis.

Dermatitis refers to swelling and irritation of the skin. The skin does not automatically become sensitive to urushiol. Instead, the sensitivity builds up after exposure to the oil. After the initial exposure, the immune system is alerted to the presence of the irritating chemical. There is usually no visible reaction after initial contact with the plant. The immune system will then prepare a defensive reaction in case the skin comes into contact with the oil again (x).

Itchiness and swelling often accompany this rash. You should avoid scratching it because this will irritate the reaction and potentially break the skin, which can cause infection if bacteria are passed from the nails to the open scratch.

Possible patches, streaking, bumps and oozing blisters may occur. People should note that blister fluids are not contagious. As the blisters heal, they may form scabs, which leave behind discoloration or scarring.

Dry skin or a skin color change is possible. Different skin areas may break at different periods. This makes the rash look as if it’s spreading. Often, poison sumac rash looks like a straight line. This is because of the way the tree or its parts brush against the skin. The rash appears more spread out if an individual came into contact with urushiol from a surface like a piece of clothing or pet fur.

The severity of the rash varies depending on the amount of urushiol that gets on the skin. Although it can take longer for the rash to develop after contact with the oil, a section of the skin exposed to more urushiol may develop the rash sooner.

Poison sumac symptoms may interfere with a person’s day to day activities depending on their location.

Poison sumac rash is not contagious. Blister fluid from the rash does not contain urushiol and it cannot spread the rash. A person cannot contract poison sumac rash from another person unless they have touched urushiol that is still on that individual or on their clothing.

Poison sumac rash is usually triggered by coming into contact with a sap oil found in poison sumac known as urushiol oil. It is a resilient oil found on the plant’s stem, leaves and also in the roots. If the oil spreads to household equipment, gardening equipment and fabrics, it can remain active for months. Even if the plant dies, the oil is still active. Coming into direct contact with the plant is the most common way of getting a poison sumac rash.

Direct or indirect contact with the plant (x). This includes touching shoes after walking through some poison sumac plant. Some urushiol might get into the hands, and the oil can be transferred into other parts of the body like the face through touching or rubbing. Other contaminated objects that can carry urushiol include clothing, tools and livestock. These surfaces can harbor urushiol for a long period after it has left the plant.

Burning this poisonous plant can be dangerous because the allergens can cause nasal passage or lung irritation when they are inhaled. The smoke from burning poison sumac contains urushiol. Inhaling the smoke can result in major breathing issues, especially in individuals who have pre-existing respiratory problems (x).

Having siblings or family members who are allergic to poison sumac or who have had similar reactions in the past could be a factor. This also applies to individuals with strong allergic reactions.

People who have a weakened immune system due to autoimmune disorders and other medical conditions may react more strongly.

Outdoor enthusiasts are also at a greater risk of coming into contact with the plant.

Treating poison sumac mostly relies on self-care methods or home remedies. The rash also disappears after two or three weeks without any treatment.

If the rash is widespread or if it features large blisters, the doctor can prescribe an oral corticosteroid, such as prednisone. These help to control the patient’s immune system reaction. In case a bacterial infection develops at the rash site, an oral antibiotic may be necessary (x).

People who have come into contact with poison sumac should do the following:

Seek medical attention in case there is a severe case of the rash, such as developing on the genitals or face.

Aloe vera helps to reduce irritation and can also help prevent scarring and discoloration. As a dietary supplement, take 1,000 mg (rounded ½ tsp) of aloe vera extract once daily with 8 oz of water or beverage of choice, or as directed by your physician. It can be used topically as desired.

Green tea can be taken in servings of 500 mg (about 3/16 tsp) and taken either once or twice daily. Consumption should not exceed 1000 mg per day. Green tea extract should also not be used for a period exceeding three months.

L-histidine HCL powder should be taken in a daily serving of 500 mg. A daily dosage of more than 1,000 mg of L-histidine is not recommended.

Poison sumac, also known by its species name Toxicodendron vernix, is a toxic plant found in wet areas of the southern and northern United States. The plant has a sap oil known as urushiol that causes an itchy, red skin rash. The rash is caused by an allergic reaction to the oil. Poison sumac is related to poison oak and poison ivy plants, which also cause a similar rash. Poison sumac rashes are not common because the plant is not so widespread. Poison sumac plants are characterized by red stems and bright green leaves. The leaves appear in clusters of seven to 13.

You do not need to see a doctor unless an extreme reaction is noted, or if smoke from a burning bush is inhaled. This is especially true if you have existing respiratory problems. Supplements like aloe vera and green tea may be able to help manage symptoms.