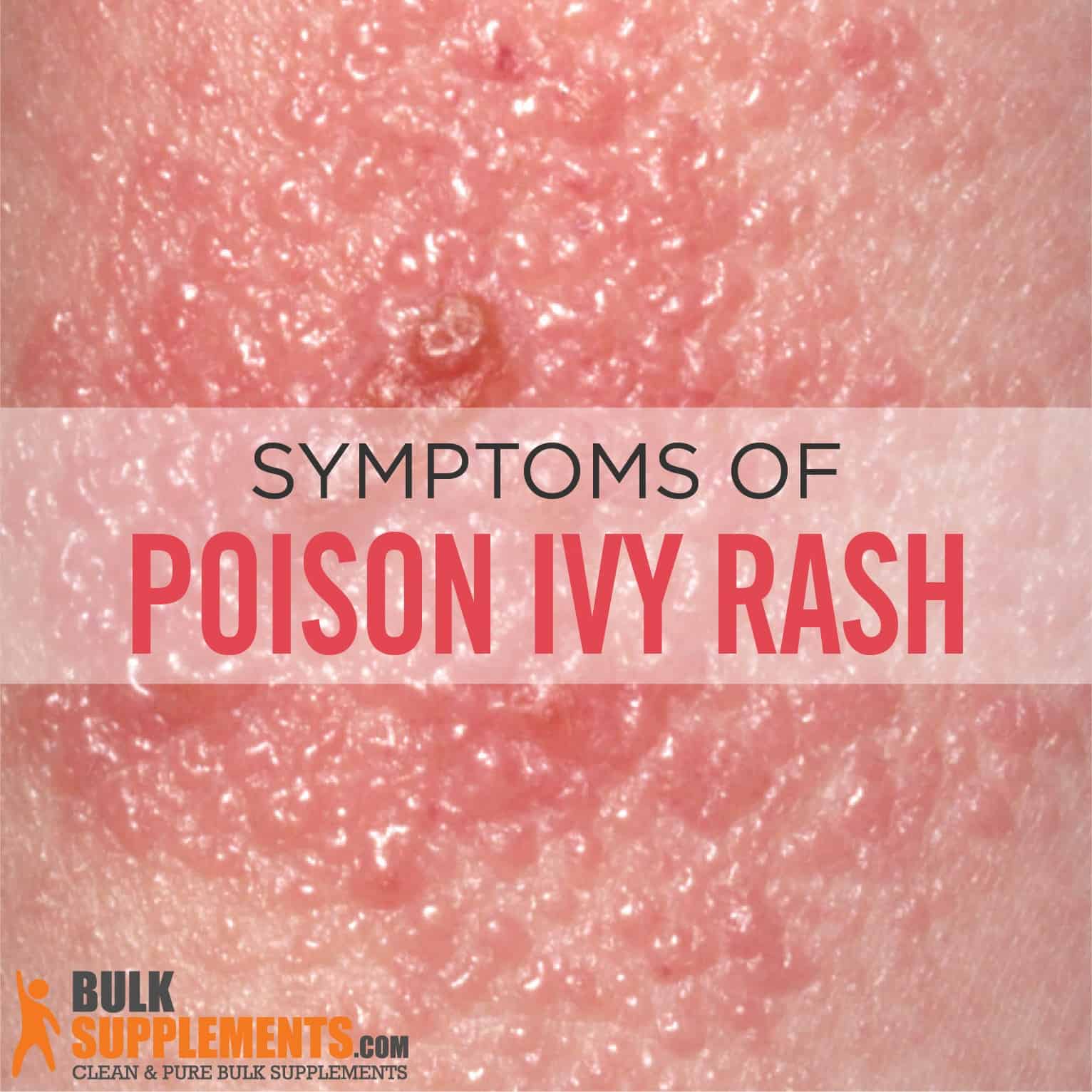 What is a Poison Ivy Rash?

A poison ivy rash results from an allergic reaction to urushiol, an oily resin found in certain plants. This oil exists in the stems and leaves of poison oak, poison sumac and poison ivy. Also called Toxicodendron radicans, poison ivy is native to North America. It is known for causing contact dermatitis, an allergic reaction on the skin. The sap in different parts of the plant causes instant irritation on the skin. Most people are allergic to the oil. However, there are some individuals who are immune to it or whose immune systems are not as vulnerable (x).

Usually the rash clears on its own, but severe cases may need treatment and it can also cause infection. In addition, contact with poison ivy is serious if it is eaten or if a patient breathes in fumes that contain the oil. It can cause respiratory and digestive damage and even death (x).

Poison ivy mainly grows on the edges of woodland, in areas where there is sufficient sunlight. Its characteristic feature is its cluster of leaflets that grow in groups of three. The leaves may have different shades of green ranging from light to dark. It is a low shrub and also a climbing plant with pale green berries hanging from it. The main vine does not have thorns. Instead, it holds all the stems, which carry individual leaves. It is very common in New England, the mid-Atlantic and southeastern United States (x, x).

Poison ivy rash typically appears about 12 to 72 hours after exposure to the plant. However, symptoms may form earlier depending on how sensitive the skin is. Also, the severity of the rash depends on the amount of urushiol that touches the skin. The rash usually appears in a straight line on the skin that mimics the line of contact with the plant. It is not contagious and it does not spread to other parts of the body (x). Some of the most common symptoms of a poison ivy rash include:

Poison ivy also causes a severe, uncomfortable itch where it comes in contact with the skin. Research states that most people are allergic to urushiol, the allergen in poison ivy. Between 50 and 75 percent of people have a reaction to it. The immune system defends against the allergen because it remembers being in contact with it in the past. The proteins that trigger the immune response also cause the itching sensation, so it often occurs in a cycle. However, prolonged scratching worsens the rash, causing the area to become very tender or swollen. It may also bleed or become infected (x).

Blisters are usually painful, uncomfortable and highly annoying. However, they usually never signify anything serious and they often go away shortly after they appear. Blisters that occur as a result of poison ivy rashes are not any different. Poison ivy may also cause hives as the body reacts to the allergen. If the patient has several different rashes or if the hives cover a large part of the body, they may need medical attention (x, x).

This is one of the main symptoms of poison ivy rash. An allergic reaction to poison ivy causes swelling and redness in the skin, irritated by the urushiol in the plant as the immune system tries to fight off the allergen. Swelling may require medical attention if it affects the face, eyes or genitals (x, x, x).

Inhaling the smoke from burning poison ivy plant can cause inflammation in the lungs. Not only does it make it difficult to breathe, but it can also cause severe damage to the respiratory system. Patients who have difficulty breathing after contact with poison ivy should consult a physician immediately. This symptom can be potentially fatal (x).

Urushiol oil is a type of resin oil in the leaves, roots and stems of a number of different plants, including the poison ivy plant, poison sumac plant and poison oak. For example, wood nettle, stinging nettle and baby’s breath all have poisonous vines that contain urushiol oil (x). The Virginia creeper also looks like poison ivy and it is not as allergenic, but it can still irritate the skin (x). The rash is a result of allergic contact dermatitis. The resin oil has a sticky texture which makes it easy to attach to clothing, skin, equipment and even animal fur (x).

There are three different ways that the rash spreads to humans: direct contact, indirect contact and airborne contact. A patient does not have to directly touch the plant to get a rash. They may only touch another object with the resin on it and still develop a rash, since it is very sticky. The plant also releases urushiol particles into the air when it burns, which can land on the skin. Because there are different ways to contract poison ivy rash, it’s important to warrant extreme caution, especially in areas where the plant grows in abundance. However, poison ivy is not contagious, so patients cannot spread it from person to person because the skin absorbs the oil very quickly (x).

Poison ivy usually goes away without any treatment and heals in one to three weeks. Patients can often use home remedies to get rid of it. Rinse the skin with lukewarm, soapy water after touching the plant and wash anything that may have the oil on it, such as clothing, gardening tools and pets. Do not scratch the rash and do not touch the blisters to avoid infection. There are also oatmeal treatments to add to a bath that can ease the discomfort or use a clean cool compress to relieve itching (x).

However, a serious reaction will require medication from a dermatologist, such as a steroid ointment if the reaction is mild or prednisone if it is more severe. Other remedies include calamine lotion and antihistamines. Specifically, patients should only take antihistamine tablets because topicals can irritate the skin. However, if the patient has swelling, pain, fever, pus or warmth around the rash, it may be infected and require an antibiotic. It’s best to visit a dermatologist to inspect a skin rash for a diagnosis (x).

The body contains collagen in the muscles and internal organs. It is also in animal bones, which means humans can use collagen supplements to produce collagen in their bodies. It protects the body and holds everything in place. The skin is mostly made of collagen, which promotes skin elasticity so that it can properly protect the body and fight infections. Taking collagen as a supplement may help combat skin irritations (x). The recommended dosage for hydrolyzed collagen bovine powder is 2,500 mg two to four times a day. Consult a doctor before taking this supplement.

Native to the United States, Canada and Europe, echinacea leaves, roots and flowers are a common ingredient in natural medicines for different ailments. It helps boost immune system activity and fights infections. It also supports healthy cell growth and repair. According to studies, echinacea can also be used to form a tincture that reduces histamine reactions. It may even help with poison ivy by preparing the immune system to better combat the allergen and potential infection (x). As a dietary supplement, take 450 mg of echinacea extract powder once or twice a day, with a doctor’s approval.

Found in meat, fish, eggs and dairy, vitamin B12 protects the nerves in the body and maintains healthy metabolism. It may help treat different forms of anemia and possibly boost immune system function (x). As a dietary supplement, take 100 to 200 mg of vitamin B12 per day, after consulting a physician.

Quercetin is a natural plant compound in fruits, vegetables, leaves and grains. It has respiratory benefits and it may also lower cholesterol and aid in weight loss. In addition, it can also fight inflammation in the body with its antioxidant properties that fight infection and free radicals (x). The recommended dosage for quercetin dihydrate powder is 250 to 500 mg once or twice a day with food. Consult a physician before taking this supplement.

Vitamin C participates in various processes in the body. It can repair muscles and tendons and also help to heal wounds. It is also a popular substance to treat and prevent infections, as one of the most powerful antioxidants to boost the immune system. Vitamin C also promotes healthy skin, so it’s a common ingredient in cosmetics products, along with vitamin E 700 IU (x). As a dietary supplement, take ascorbic acid/vitamin C in 1,000 mg doses daily, unless a physician recommends a different dosage.

An encounter with a poison ivy plant can turn a fun camping trip or outdoor outing upside down. The rash is a result of an allergic reaction to urushiol, an oil resin in poison ivy, poison oak and poison sumac plants. They are not the same plant, but they all cause similar reactions, so it’s important to be able to recognize the differences, especially in areas where they grow abundantly. About 50 to 75 percent of people are allergic to this oily substance and it produces an itchy, red, swollen rash.

The rash usually lasts one to three weeks and it usually goes away on its own without treatment. However, more severe cases or infections may require medication and antibiotics. Supplements may also be a good way to remedy a poison ivy rash. They can help fight off infections, promote healthy skin and boost the immune system. However, it’s best to consult a doctor before starting a supplement regimen. They are not a medical treatment. Instead, they only aim to promote general health.