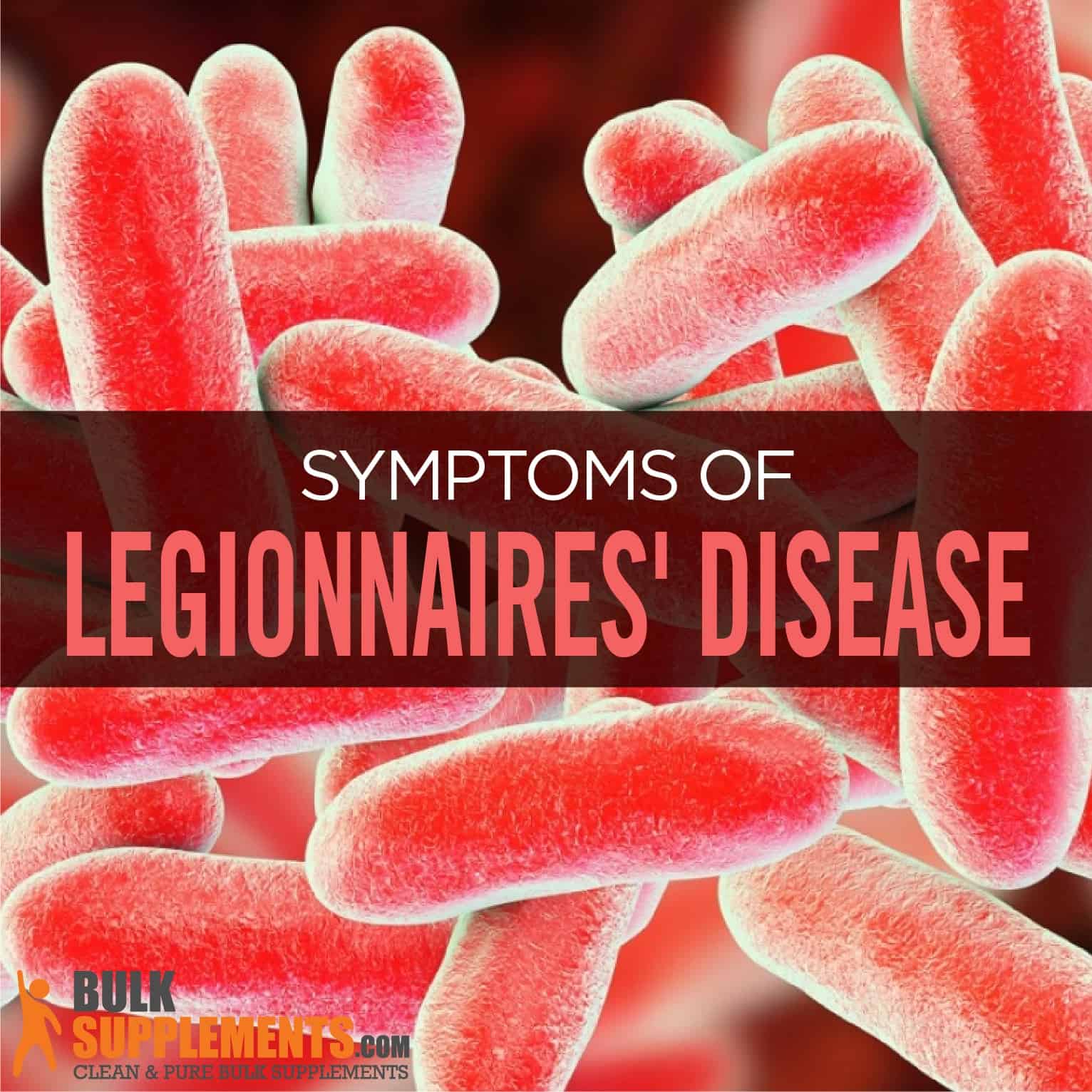 What is Legionnaires’ Disease?

Legionnaires’ disease is regarded as a severe case of pneumonia that affects the lungs. The bacterium that causes the disease (Legionella pneumophila) thrives in moist conditions and airborne water droplets associated with water systems. According to the Center for Disease Control and Prevention (CDC), vapor or mists contaminated with the bacteria may come from cooling towers, whirlpool spas and water used for bathing and drinking. The bacteria can also be found in natural water sources such as reservoirs, lakes and rivers. People contract Legionnaires’ diseases when they inhale the vapor or mist that contains the bacteria. Most cases of the disease are due to poor water management (x).

Legionella bacteria triggers pneumonia, an inflammation of the lungs. The disease usually occurs two to 10 days after a person is exposed to the bacteria. The frequent signs and symptoms of Legionnaires’ disease are headaches, fever, muscle pain and chills. Other symptoms like cough, chest pain, confusion, nausea and vomiting follow after a few days.

Outbreaks of legionnaires’ disease can be prevented by meticulously cleaning and disinfecting water systems, spas and pools. Avoiding smoking can also lower the risk of getting infected.

The cause of this highly infectious disease is Legionella bacteria. It is a type of bacterium found naturally in air conditioning units, plumbing systems, water features and water fountains. It is also found naturally in freshwater environments such as lakes and streams. Legionella can become a health concern if it grows and spreads in human-made building water systems like hot water tanks, hot tubs, sink faucets, showerheads, cooling towers and decorative fountains (x).

Temperatures ranging from 20 to 45 degrees, or 68 to 113 Fahrenheit can be ideal for the Legionella bacteria to multiply rapidly and spread. When this happens, the water containing the bacteria spreads in small airborne water droplets that are tiny enough for people to breathe in. People get Legionnaires’ disease or Pontiac fever (a milder form of Legionnaire’s disease) when they inhale the small water droplets contaminated with the bacteria.

Though rare, people can also get infected by aspiration of taking water containing Legionella. This occurs when water accidentally enters the lungs, usually because a person chokes or coughs while drinking. People with swallowing difficulties are at the greatest risk of aspiration.

Soil can also transmit Legionella. It is possible to contract Legionnaires’ disease after coming into contact with contaminated potting soil or working in the garden.

Legionnaires’ disease is not contagious, meaning it cannot spread from person to person, but this can be a possibility under rare circumstances (x).

It takes approximately two to 10 days for Legionnaires’ disease to develop after exposure to Legionella. In most cases, symptoms start to show after 5-6 days. The initial symptoms of Legionnaire’s disease are similar to those of the flu and they may include:

Sometimes the disease can affect other parts of the body, leading to symptoms like:

Not every individual exposed to Legionella bacteria develops Legionnaires’ disease. A person is at a greater risk of developing the infection if they (x):

Lifestyle factors like heavy alcohol intake increase the risk of getting infected as well. People who smoke cannabis are even at a greater risk of getting Legionnaires’ disease, as one study suggests (x).

Legionnaires’ disease can cause a number of life-threatening health complications, such as (x):

This is a sudden loss of the kidney’s ability to carry out their main functions, which is filtering waste material from the blood. When the kidneys fail, extreme levels of waste and fluid accumulate the body. This accumulation of fluids and waste in the blood is what causes the kidneys to fail.

Septic shock is a complication that occurs if Legionnaires’ disease reaches the blood. The infection causes a sudden decrease in blood pressure, reducing the flow of blood to vital organs like the kidneys and brain. The heart responds by increasing the volume of blood pumped to try and compensate for the lost pressure. This extra workload weakens the heart and decreases blood flow even further.

This complication can occur when the body fails to provide the lungs with sufficient oxygen to them to function properly, or when the body can’t get rid of carbon dioxide from the blood.

Outbreaks of Legionnaires’ disease can be prevented. The key to preventing the infection is good maintenance of the water systems where Legionella can grow, such as hot tubs, cooling towers and drinking water systems. These systems should be cleaned and disinfected. The Center for Disease Control and Prevention (CDC) said that a number of the cases that occur can be prevented if good water management is practiced (x). They state that most outbreaks reported between 2000 and 2014 were caused by problems that could have been prevented through more effective water management.

Managers and owners of commercial buildings are encouraged to adhere to guidelines provided regarding water safety.

Treatment for Legionnaires’ disease involves antibiotics given intravenously or by mouth for between 10 to 14 days. The most used type of antibiotics are:

The choice of antibiotics depends on the patient’s tolerance to the medication and clinical state. In severe cases of Legionnaires’ disease that is resistant to a particular antibiotic, rifampin can be added as a second drug.

The drugs should be taken promptly once the disease is diagnosed because the infection tends to progress rapidly.

After early treatment, a patient’s symptoms begin to improve within 3 to 5 days.

This is a potent amino acid that has been shown to have the potential of improving lung function and thin mucus. It is considered safe for adults, but is not recommended for individuals with asthma. People taking nitroglycerin and activated charcoal should also avoid N-acetyl cysteine (x). It is suggested that N-acetyl L-cysteine powder be taken in serving of 600 mg (scant ¼ tsp) up to three times per day, or as directed by a physician.

For a patient to recover from Legionnaires’ disease symptoms, both the mind and body should be treated. Astragalus is an adaptogen and has anti-inflammatory capabilities that help boost the immune system. It can help lower fatigue and also help in the fight against respiratory infections while protecting the body against emotional, physical and mental stress (x). The suggested serving size for astragalus extract powder is 1,300 mg to be taken daily with meals, or as directed by a physician.

Neurological symptoms from Legionnaires’ disease can continue for months after treatment. Ginseng may help to improve concentration, mood, cognitive function and reduce stress. A study published in the journal Nutrition Reviews suggested that ginseng may benefit cognition (x). As a dietary supplement, take 1,000 mg (rounded ½ tsp) of ginseng extract powder once or twice daily, or as directed by a physician.

Praised for its antiseptic benefits, tea tree oil has been used for a long period of time to treat many conditions, including bacterial infections and respiratory tract infections. Tea tree oil may help soothe sinuses and lung when a patient is recovering from Legionnaires’ disease symptoms.

These water-soluble vitamins are recommended during the recovery phase. They play a big role in energy production in the body, supporting neurological functioning and reducing depression (x, x). They include vitamins B1, B6 and B12. They can be found in foods like avocados, beef liver, feta cheese, seaweed, lentils, salmon and turkey breast.

Getting enough of these essential minerals is important while recovering from Legionnaires’ disease. Magnesium can help improve energy levels. Potassium is important in lowering some symptoms caused by Legionnaires’ like fatigue, poor neurological functioning and depression.

Peppermint oil is good for relieving headaches, soothing digestive upset and improving mental focus. It has antimicrobial activity and also supports healthy lung function (x, x). As a dietary supplement, take 700 mg (about 1/3 tsp) of peppermint extract powder once or twice, or as directed by a physician. Best taken with meals.

Legionnaires’ disease is an infectious disease but is not contagious. Researchers state that 1 in 10 infected individuals will die from the disease. The disease is caused by Legionella bacteria, which thrives in water found in plumbing systems, hot tubs and air conditioning systems. The disease mostly spreads through inhalation of airborne water droplets, and rarely through aspiration of infected water. The disease can be cured through antibiotics. Neurological function, fatigue and depression are symptoms that may persist for months or years after treatment.