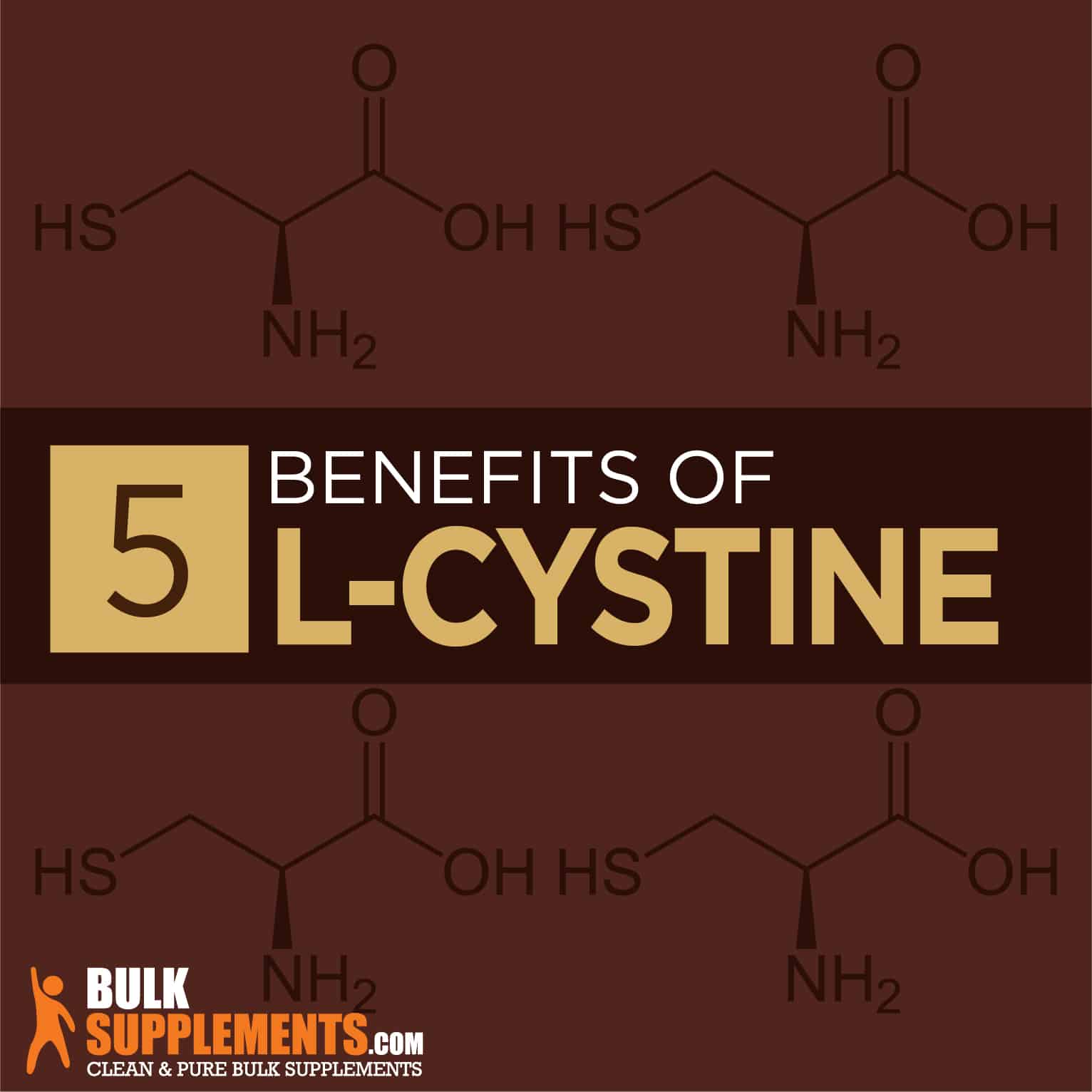 L-cystine, also known as cystine, is an oxidized dimeric form of the cysteine amino acid and the product of linking two cysteine residues with a disulfide bond (x). Cysteine and cystine are very similar. In fact, one can be turned into the other and vice versa. Cystine acts as an antioxidant and deters radiation in skeletal tissues and skin (x). It also helps the body heal burns and wounds and break down illness-related mucus deposits (x).

English chemist and physicist William Hyde Wollaston discovered cystine in 1810. He is also renowned for discovering the chemical elements palladium and rhodium (x). In 1899, eighty years after cystine’s discovery, researchers recognized cystine as a protein derivative after they extracted it from a cow’s horn (x).

Cystine is a nonessential amino acid. That means the body produces its own supply of it. In our bodies, cystine occurs naturally and abundantly in skin, hair and connective tissues, as well as in horn and wool in animals (x). Even though it’s a nonessential amino acid, we can consume more of it by eating more whole grains, dairy products and eggs.

Recent research has sought to determine the viability of cystine in alternatives to antibiotics and environmentally safe insecticides (x). In the latter case, this research has found that cystine-stabilized peptides have helped recently made insecticides degrade in the environment after effectively killing crop pests.

L-cystine and its analog, L-cysteine (coming in both NAC and HCL forms), have a wide range of benefits. For starters, they act as antioxidants and protect tissues from pollution and radiation. They also help slow down aging in skin, nails and hair (x). In cells, cystine reduces back into cysteine, an ingredient for making important biomolecules such as proteins and glutathione (GHS), a potent antioxidant (x).

So why should we care about cysteine? Well, GHS levels in the body decline during aging, and one study suggests that taking supplemental cysteine can help the elderly maintain healthy amounts of GHS (x). On top of that, cysteine helps the body make collagen (which many consider the glue that holds the body together) and keeps skin elastic (x). And, research has suggested that cysteine improves the body’s insulin sensitivity, thereby regulating blood sugar. This means it may help treat diabetes, too (x).

Research suggests that supplemental cysteine as an antioxidant may help treat thalassemia (a blood disorder that causes cellular damage by forming reactive oxygen species) by lowering oxidative stress in the body (x). On top of that, a 2009 article written by Dr. Paul Millea for the journal American Family Physician supports supplemental cysteine’s applications in the treatments of:

It’s possible that supplemental cysteine may also help prevent chronic obstructive pulmonary disease (COPD) and contrast-induced kidney damage during X-rays (x). Moreover, it could also help alleviate cravings in people with methamphetamine dependencies, according to a study published in the Archives of Iranian Medicine (x).

Cystine and its analog cysteine may help support postoperative recovery, heart health, cognitive functioning, memory and focus, and they may even reverse hair loss. So, if you want to increase the amount of cysteine and GHS in your body, you may want to take more cystine.

A study published in SpringerPlus in 2013 showed that postoperative patients treated with cystine suppressed:

Supporting the treatment of respiratory tract infections, supplemental cysteine gives antioxidant protection to the lungs and helps the body break down mucus (x). It does this by breaking the disulfide bonds of mucoproteins, which further breaks down mucins, serum albumin and immunoglobulins present in the mucus. This helps you breathe better when your airways are inflamed.

Despite it being a mild, benign condition, alopecia (hair loss) is greatly associated with psycho-emotional stress, likely caused by dissatisfaction with appearance and concern about social stigma (x). Given that about 50 percent of males before the age of 50 and 70 percent of males after the age of 50 develop alopecia, it is understandably a concern.

Butterbur: Benefits, Dosage and Side Effects.

L-Cystine Side Effects and Dosage

Common side effects of taking cystine include stomach pain, nausea, vomiting, wheeziness, runny nose and mouth inflammation. Side effects are possible with a normal daily dose of 1.5 grams.

This common side effect may precede feelings of nausea and vomiting. Sometimes, diarrhea and stomach cramps can follow, too. To counter these symptoms, take cystine with plenty of food and water to avoid irritating the gastrointestinal tract.

Allergic reactions to cystine are possible. A reaction may manifest all over the body as irritated, itchy, peeling patches of skin. If patches persist or start to swell, or if itching intensifies, talk to your doctor.

It is best to take 500 milligrams (or a 1/3 teaspoon) one to three times daily. Of course, if a doctor suggests otherwise, it is wise to follow their instructions. Also be sure to talk to your doctor if you’re pregnant or nursing.

Many consider L-cystine and its analog, L-cysteine, leading supplements supporting memory and cognition, heart health, lung health, skin health and the immune system. Those recovering from surgery may especially benefit from taking them. Although strong evidence supports the efficacy of these supplements on health, the scientific community warmly encourages further research into them.