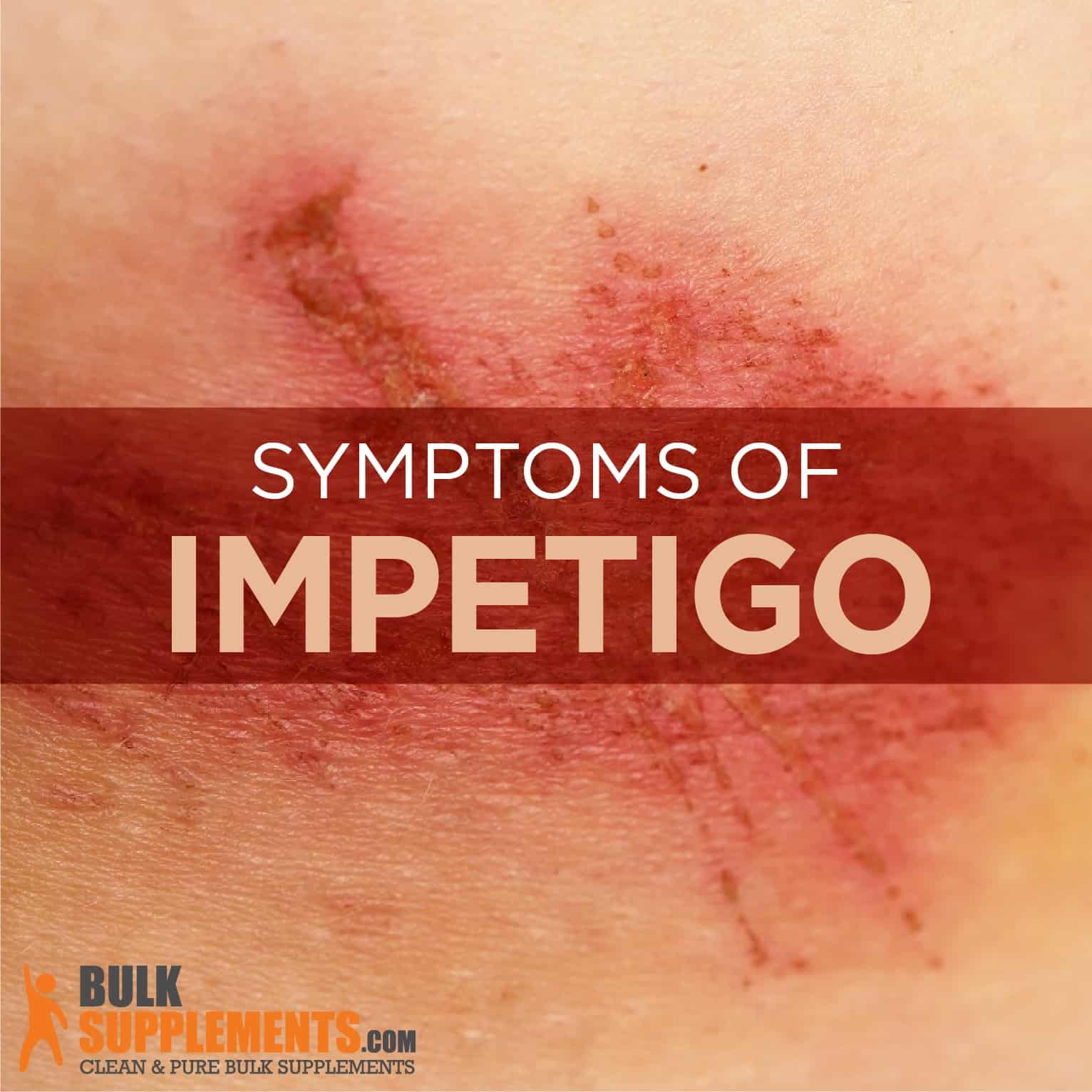 If a child develops red sores, especially around the mouth and nose, it could be that he or she has a case of impetigo, the most common skin condition among children. Impetigo accounts for around 10 percent of skin conditions reported in pediatric clinics and, according to the World Health Organization, an estimated 111 million children in developing countries have it at some point (x, x).

Impetigo is an extremely contagious infection that mostly affects young children aged 2 to 5 years, but can also infect infants, adolescents and adults. People become infected when bacteria penetrate the body through a break in the skin such as a scratch, cut or insect bite. The infection causes blisters and/or skin ulcers that can be painful and severe. It spreads through close contact and is more likely to occur in warm and humid environments (x).

There are three distinct types of impetigo — bullous, non-bullous and ecthyma — each with slightly different causes and characteristics. In most cases, diagnosis can be done based on the appearance of the rash. In some cases, sample fluid may be taken from the blisters for testing. Treatment depends on the type and severity and generally includes topical or oral antibiotics. Natural remedies can also help.

Generally, blisters, sores and/or ulcers indicate a possible impetigo infection. There are three types of impetigo, however, and each type displays unique symptoms.

One common symptom among the three types of impetigo is itchiness. People tend to scratch the itchy areas, which then spreads the disease to others.

This type is not the most common, but is the one most likely to strike very young babies. It causes large, fluid-filled blisters with a clear appearance that later turns cloudy. These blisters are about .78 inches or up to 2 centimeters in diameter and can stay on the skin for a long period without bursting. While other forms of impetigo are more likely to affect the area around the mouth, bullous impetigo tends to appear on the trunk, neck and diaper area (x). The blisters can be itchy, but not necessarily painful. A dark crust normally develops in the final stages of development, but later resolves with healing. Common symptoms associated with this type of impetigo are fever and swollen glands (x).

This is the most common type of impetigo. It accounts for an approximate 70 percent of all cases and is most likely to affect children between 2 and 5 years old (x). It typically manifests in clusters of small red blisters that look similar to insect bites. These sores soon burst and ooze pus or fluid, which leaves a thick and yellowish-brownish crust. Once the crusts dry, a red mark forms, which normally heals without scarring. This process takes approximately seven days. These lesions often begin on the face and around the nose. They can also affect the legs and arms, but less frequently. The sores can be painful and itchy and, in rare cases, symptoms can be more severe with swollen glands and fever. The swollen glands are occasionally found in the area of the outbreak, adding to the discomfort (x).

Out of the three types of impetigo, ecthyma is the most severe. Its symptoms include pus-filled blisters, which can lead to the development of deep ulcerations once they have erupted. It can sometimes be accompanied by swollen glands. These blisters have a thick crust that is surrounded by reddish-purple skin. The crust forms over the blister, which presents the risk of scarring. Ecthyma mostly appears on the thighs, ankles, buttocks and legs. The lesions from ecthyma heal after a period of time, but may leave scars. Ecthyma can develop if non-bullous or bullous impetigo is left untreated (x).

Two types of bacteria cause impetigo: Streptococcus pyogenes (“strep”) and Staphylococcus aureus (“staph”). Infections caused by staph can present a more serious challenge for treatment and containment. This is because one of the strains of staph called Methicillin-resistant Staphylococcus aureus (MRSA) shows resistance to many antibiotics. It can be found on skin where it does no harm until it enters the body through a cut, abrasion or irritation (x).

Bullous impetigo results from a staph infection. This bacteria produces a toxin that plays a role in breaking the connective tissue between the epidermis and the bottom layer of the skin, resulting in a blister. Non-bullous impetigo, on the other hand, can arise from either a strep or staph infection (x).

Ecythma is a bit different. It most often starts as a case of bullous or non-bullous impetigo that remains untreated and evolves into deep ulcers that are slow to heal. This can occur in people whose immune systems are impaired or are compromised by other diseases like HIV, cancer, type 1 and type 2 diabetes. It can also develop from impetigo caused by MRSA, which may be hard to treat in some people (x).

While bacterial infections cause impetigo, certain factors can increase a person’s risk for developing it. These include (x):

This highly contagious disease easily spreads when an infected person scratches the blisters and transmits the bacteria to others. Millions of people worldwide, mostly children, get it from time to time. The good news is that in many cases, it’s usually not serious and can potentially clear up on its own. Treating it, however, allows the infection to heal faster and reduces the chance that it will spread to others (x).

Impetigo treatment varies depending on the extent and severity of the sores. Treatments involve the use of topical antibiotics and are aimed at reducing the itching and discomfort that results from this acute skin infection (x).

Topical antibiotics like fusidic acid and mupirocin are the recommended form of treatment for impetigo by the Infectious Disease Society of America. They should be used for 5 to 7 days (x).

Oral antibiotics treat cases of severe or widespread impetigo. Some research suggests oral antibiotics like macrolides, anti-staph penicillins, cephalosporin and amoxicillin more effectively treat severe cases while other research indicates that there may be no significant difference in cure rates between oral and topical antibiotics (x, x).

Oral antibiotics also can cause side effects like nausea unlike their topical counterparts (x). Furthermore, there is research showing some evidence of antibiotic-resistant staph in the treatment of impetigo, suggesting the need for treatment alternatives (x).

The gel of the aloe vera plant exerts antimicrobial properties against many types of pathogens, including those that cause impetigo. It can be used topically to speed healing and reduce discomfort (x).

Ginger has long been used medicinally because it’s both antimicrobial and anti-inflammatory. For impetigo, fresh ginger can be applied to blisters. Eating ginger or taking it as a supplement also provides benefit (x, x). Take 1,000 milligrams (about ½ tsp) of ginger root extract powder once daily, or as directed by a physician. To avoid any heartburn, take with at least 8 ounces of water.

Curcumin, the compound found in turmeric, is also a potent antimicrobial and anti-inflammatory. Studies find that it can be effective when used topically or orally for skin infections (x, x, x). Take 1,000 mg per day of curcumin 95% turmeric extract powder or as directed by your healthcare professional.

Not only does this botanical help to boost the immune system, but the University of North Carolina’s Department of Biochemistry found that goldenseal can help treat skin infections (x, x). As a dietary supplement, take 500 mg (scant ¼ tsp) of goldenseal powder 1-2 times daily, or as directed by a physician.

Impetigo is a highly contagious skin infection caused by either Staphylococcus aureus bacteria or Streptococcus pyogenes. The infection mostly affects young children, but can also occur in newborns, adolescents and adults. There are three types of impetigo — non-bullous, bullous and the most severe condition, ecthyma. While there are three types, all with slightly different features, impetigo usually involves the development of red, itchy blisters. The condition can cause the lymph nodes to swell and other symptoms like fever and diarrhea. Occasionally, more serious complications develop. Treatment for impetigo involves the use of topical or oral antibiotics but in many cases, the infection clears up on its own.