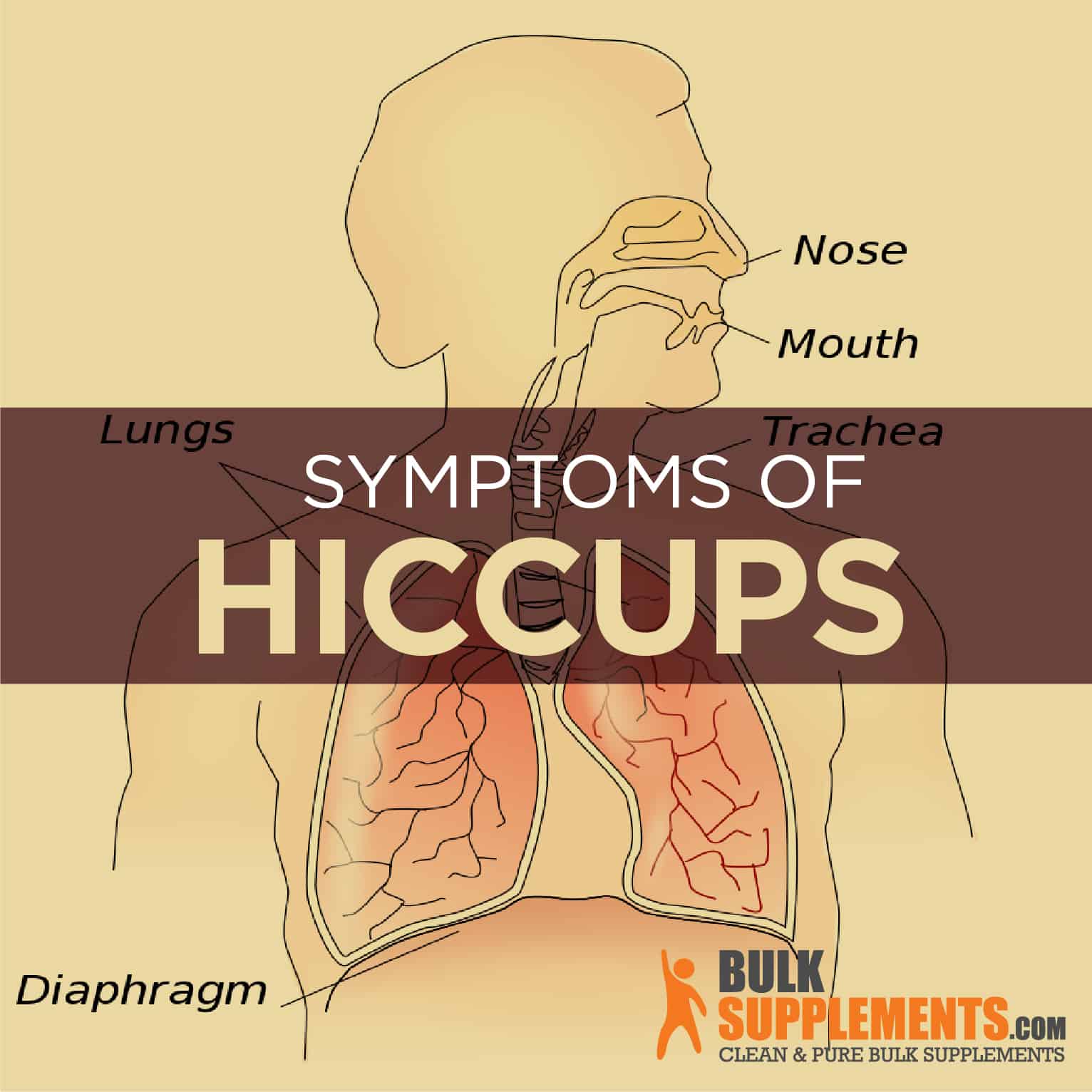 Hiccups are involuntary contractions of the diaphragm — that flat, dome-shaped muscle that separates the chest from the abdomen. During a bout of hiccups, the diaphragm contracts and the vocal cords suddenly close, which creates the repeating “hic” sound.

Hiccups seem to arise out of nowhere and scientists are still trying to discover exactly why they happen. Though puzzling and annoying, they are usually harmless. There are two types of hiccups — acute and chronic. In most cases, hiccups are short-term (acute) and last less than 48 hours.

Chronic or persistent hiccups may stem from a deeper health problem. Dealing with chronic hiccups can be extremely bothersome. They can cause exhaustion, depression and sleep disturbances (x). When an individual is challenged with another medical condition, or is trying to manage pain, having hiccups can seem unbearable (x).

Why do we hiccup? Some people theorize that they are caused by stomach irritation, toxic exposure (such as alcohol or cigarette smoke), an emotional disturbance or a change in air temperature. In rare cases, they may be a sign of an underlying medical condition (x).

Although there typically aren’t health risks associated with the temporary type of hiccups, chronic hiccups can be a symptom of one of the following conditions (x):

One reason for long-lasting hiccups is because of irritation or damage to the nerves. The vagus or phrenic nerves serve the diaphragm muscle, and factors that can interfere with normal nerve performance may include:

Your body’s management of the hiccups reflex may be compromised because of trauma or infection to the central nervous system. Examples of this include:

Long-term hiccups can also be triggered by alcoholism, anesthesia, diabetes, kidney disease, steroids or drug use. You may be at a greater risk of getting them if you are under stress, or you have recently undergone surgery. Gastrointestinal disorders may prompt hiccups to start, as well as some cardiovascular medical conditions (x). Unfortunately, prolonged hiccups may interfere with wound healing after surgery and they may prohibit good sleep and normal eating habits.

How to Treat Hiccups

Predicting or preventing hiccups may not be possible. However, because they are so irritating and universal, there is a list of treatment tips that is long, varied and sometimes amusing. To cure hiccups, many people fall back on folk remedies that aren’t scientifically proven. Scientific or not, one of these tricks just might work:

Supplements and Other Treatments for Hiccups

There are natural and herbal supplements that may aid in conquering hiccups. When your diaphragm is spasming uncontrollably, some people try fennel and chamomile or peppermint tea.

When long-term hiccups don’t respond to other remedies, alternative treatments, such as hypnosis or acupuncture, may also be helpful.

In trying to solve the mystery of hiccups, many cultures have passed down traditional superstitions associated with this baffling phenomenon.

In addition to the following list of folklore, Japanese tradition says that hiccuping 100 consecutive times means you will die (x).

Somebody is thinking of you

In the Old English tradition, hiccups were thought to be caused by demon elves. To get rid of them, an ancient remedy from the 10th century tells the sufferer to prepare a salve, draw a cross and sing a religious verse in Latin.

Apply wet things to your forehead

Filipinos treat hiccups by placing a wet piece of paper or thread on the forehead. In Latin America, the wet item must be red string, moistened with spit. Romani people say to tie a key with red string, put around the neck and throw it over your shoulder. If you don’t choke, you just may cure your hiccups!

Envision a green cow grazing in a blue field

A favorite hiccup remedy from Ireland is to visualize a green cow grazing in a blue field.

Catch part of your face

In 16th century Scotland, people with the hiccups were told to hold the chin with the right hand while someone sings a religious tune. Nordic Viking tradition says to grasp the tongue in a handkerchief, pull outwards and count to 100.

Cutlery in a water glass

The traditional Norwegian hiccups cure says to take three sips of water from a glass that contains a sharp knife (point down) and hold your breath. If that’s confusing, you can try the Finnish variation: swap the knife for a spoon, throw sugar into the water first, and skip holding your breath.

Hiccups are a mysterious phenomenon, caused by a spasm in the diaphragm muscle and followed by a noisy valve closure in the vocal cords. This produces the characteristic “hic” sound that usually prompts us to seek an immediate cure. Normally lasting a few minutes, when they last longer, they are labeled “chronic”. Damage to the vagus nerve, the central nervous system and other factors can invite hiccups to stick around.

Hiccups are powerful enough to derail and distract you until you can find a remedy that works. And there are no shortage of remedies. Most remedies are not scientifically proven, leaving us wondering if the methods simply cause the diversion necessary to get rid of the hiccups. Treatment is as varied as the historical, global myths associated with the cause of hiccups. The creativity that cultures have displayed to explain the hiccups show us that the confounding experience of getting them has been around forever — and may be here to stay.