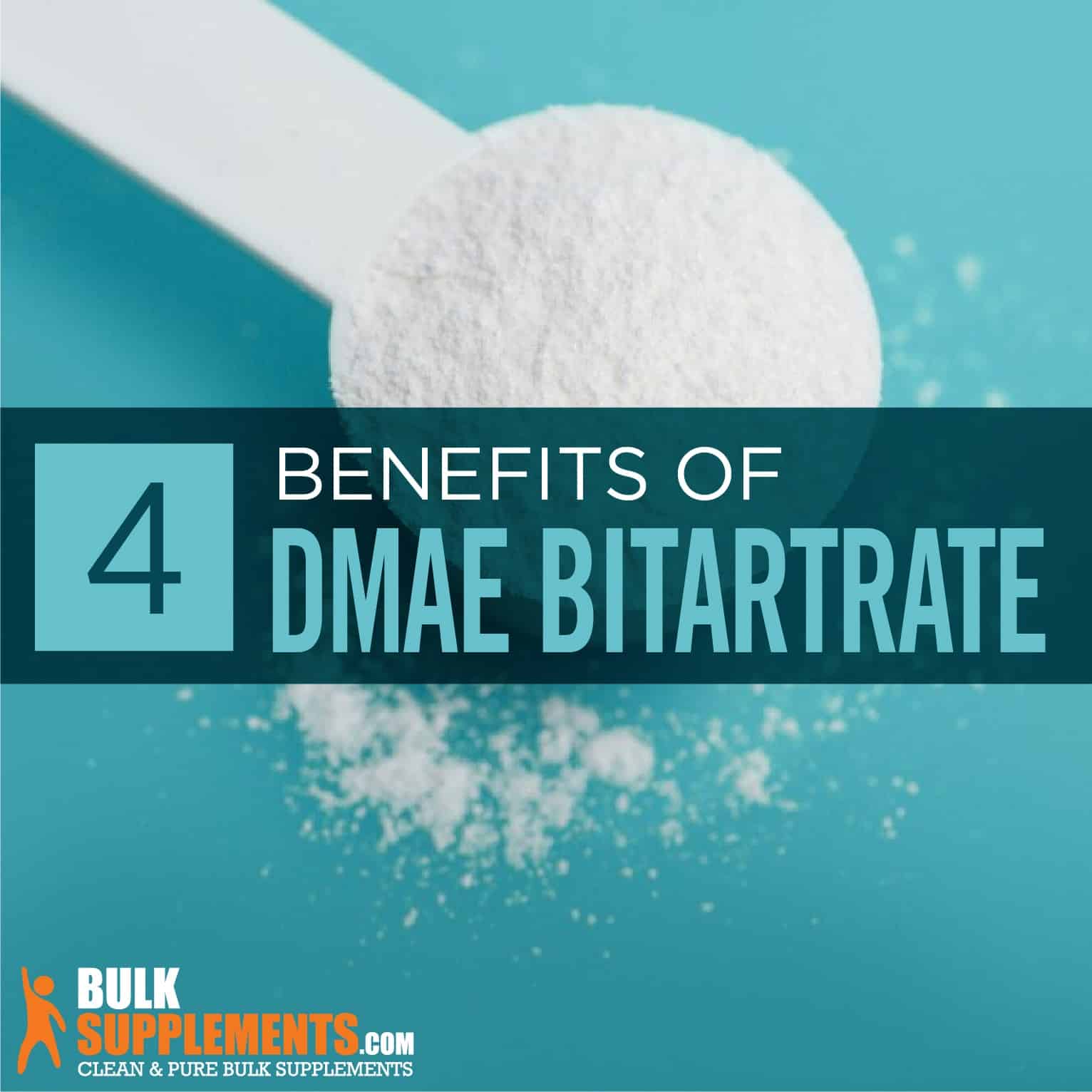 What is DMAE Bitartrate?

Deanol (DMAE) is an organic amino acid compound that the brain produces naturally. It is present in fatty fish such as salmon, sardines and anchovies (x). Researchers often refer to it as a “mind health compound” because it may be able to reduce chemicals that impair cognitive function with age. Research also shows that DMAE may increase acetylcholine, the neurotransmitter linked to memory (x).

In fact, its main function is its effect on acetylcholine. The neurotransmitter activates muscles in the peripheral nervous system and supports cognitive brain functions through the central nervous system. Acetylcholine speeds up memory and learning and affects the brain’s ability to respond to injury. The chemical also supports REM sleep and engages sensory functions (x). Therefore, when a patient lacks acetylcholine, they may experience symptoms like weak muscles and fatigue. Since DMAE boosts acetylcholine, research associates it with these brain and muscle functions as well and it may produce a similar effect.

According to research, DMAE may be able to boost patients’ moods. One study used a sample size of patients that experienced emotional disturbances and the researchers administered a vitamin-mineral drug with DMAE. At the end of the study, the patients experienced better moods after taking the drug and they were also more active. Based on these results, researchers claim that it may be an effective way to boost mood and wellbeing (x).

During a randomized clinical study, participants applied a 3 percent DMAE facial gel daily for 16 weeks. At the end of the study, researchers concluded that the facial gel was safe and efficient in addressing signs of aging. It helped make the patients’ skin more firm and improved the skin’s appearance. The review also concluded that it may help reduce inflammation and researchers noticed that it reduced wrinkles around the patients’ eyes and foreheads. And to top it off, the research found that DMAE did not appear to cause side effects such as redness, peeling or drying that other topical treatments may cause (x). Other research notes its ability to reduce the pigment that causes age-related sunspots (x).

In addition, some patients use DMAE for its mild stimulant effects. Participants in a study who use DMAE reported less fatigue during the day and less difficulty falling asleep at night. The type of stimulation that DMAE causes is much different from the stimulant effects that caffeine, amphetamines or other drugs produce. The difference is that DMAE does not cause a quick boost of energy followed by a crash. Instead, patients in the study reported continuous mild stimulation without any side effects or withdrawal symptoms, such as anxiety or depression (x).

Research also claims that DMAE may have anti-aging effects. Acetylcholine is the main transmitter that affects learning and memory and DMAE helps stimulate acetylcholine production. Researchers hypothesize that it may act as an antioxidant to help reduce oxidative damage that can interfere with cognitive function (x).

It may help prevent or manage Parkinson’s disease, Huntington’s disease and other involuntary movement disorders (x). In addition, research claims that it may even have safe effects on children with behavioral or learning difficulties. It may be a safer and more natural alternative for these types of conditions, such as ADD. However, there is insufficient evidence to determine its efficacy (x).

Side Effects of DMAE Bitartrate

As an oral or applied topical supplement, DMAE is most likely safe. However, it can produce several side effects. As an oral supplement, it can cause itching, increased blood pressure, upset stomach, headaches, muscle tension, drowsiness, confusion and irritability. Patients may also experience confusion and very vivid dreams (x).

Patients with schizophrenia, depression or insomnia should avoid this supplement. It may make symptoms worse. In addition, patients with seizure disorders such as epilepsy should avoid it. Do not take DMAE bitartrate while pregnant or breastfeeding because there is not enough research to determine its safety (x).

DMAE bitartrate may also interact with several different medications. For example, it may cause minor interactions with drying medications, such as atropine, scopolamine, antidepressants and antihistamines for seasonal or food allergies, cholinergic drugs for glaucoma and AChE inhibitors for Alzheimer’s disease (x). Patients should always consult a physician before adding any supplements to their daily health regimen.

DMAE bitartrate is a supplement form of DMAE. Research states that it may be able to help patients improve their memory and learning. It can also help patients retain cognitive function, especially as they age. It may help boost mood and reduce fatigue, improving emotional and physical wellbeing.

Fish is another natural source, containing abundant amounts of DMAE. Therefore, a diet high in salmon, sardines and anchovies is a very effective way to add it to the body. Although the brain produces this compound naturally and it is present in food, patients may also take supplements to make sure they get a consistent dosage. Patients can address specific health ailments by controlling the amount of DMAE in the body (x).

Although there is still a lack of research on it, the recommended dosage for DMAE bitartrate powder as a dietary supplement is 350 mg (⅛ tsp) twice a day. Individual uses may vary. However, avoid exceeding this dosage to avoid complications, medication interactions or side effects. Always consult a doctor before taking this supplement to confirm safety and follow all medical advice. If side effects occur, stop the dosage or seek medical attention.

DMAE is a natural compound that the brain produces. It is abundant in fish, specifically salmon, sardines and anchovies. Researchers label it as a potentially effective “brain food” because it can supposedly support mental stimulation and enhance cognitive function. DMAE boosts the neurotransmitter acetylcholine that plays a role in memory and learning. There are a few clinical studies that observe its positive effects on the skin. For example, it can tighten the skin, reduce wrinkles and possibly even reduce sun spots.

Consult a doctor before taking DMAE as a dietary supplement. It is likely safe, but it may cause some side effects, such as headaches, upset stomach, muscle tension and irritability. It may also interact with certain medications and increase symptoms in patients with schizophrenia, depression or insomnia. DMAE is not a proper treatment for any medical condition, but it may help improve overall health.