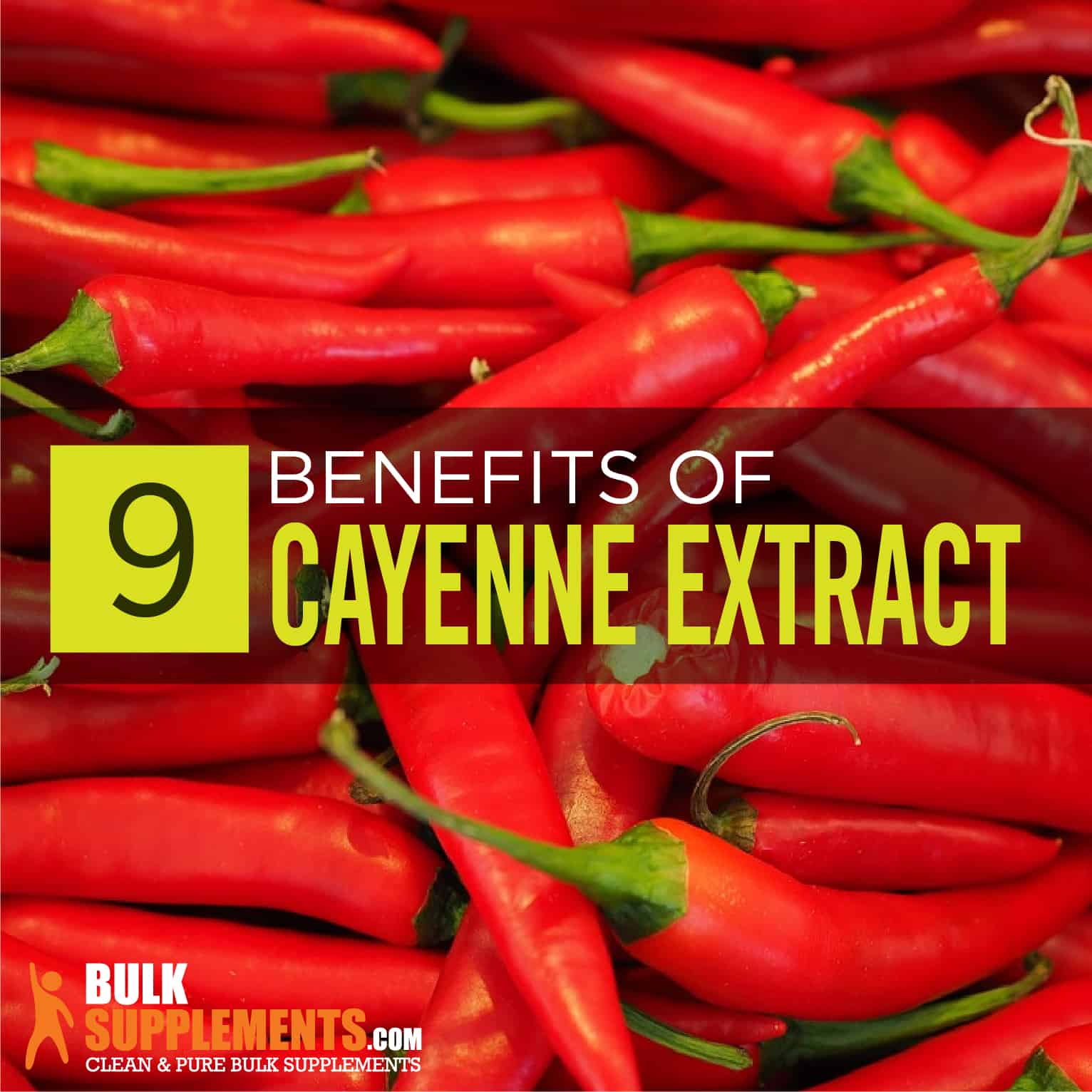 What is Cayenne Pepper?

The idea of cayenne pepper typically conjures images of spicy, hot foods. However, there is so much more to cayenne than just adding bite to a dish. This spice is a member of the nightshade family of plants, which includes jalapenos and bell peppers.

Cayenne has been in use for medicinal purposes for centuries. It was introduced to Europe by Christopher Columbus, who brought it back from Central and South America in the 15th century (x). It has been used both as a culinary spice, a food preservative and for its health benefits ever since.

Cayenne helps prevent myocardial infarction (heart attacks) by promoting fibrinolytic activity, which prevents blood clots from blocking the arteries and blood vessels. To put it simply, it keeps blood flowing effectively through the circulatory system. Since the capsaicin in cayenne aids the circulatory system by dilating the arteries and blood vessels, people with rapid heart rates should avoid it (x).

Cayenne powder applied topically reduces the amount of substance P, a chemical that sends pain signals to the brain. Reduction or removal of this chemical stops pain signals from reaching the brain and relieves pain. Studies show that cayenne pepper can relieve pain from rheumatoid arthritis, joint pain from fibromyalgia, migraines, diabetic neuropathy in the legs and feet, injuries to the lower back and osteoarthritis (x).

Cayenne is a metabolism booster as it increases the heat the body generates through a process called thermogenesis. This, in turn, helps to burn more calories (x). It also eases inflammation from allergies and food sensitivities that cause bloating and digestive problems. Add some cayenne to eggs at breakfast to curb your appetite through the day.

A study showed that people who ate a breakfast containing capsaicin burned 51 percent more calories in the hours after breakfast than those who didn’t consume it (x). Another study showed that people taking capsaicin supplements ate 10 percent less during the day because they felt fuller for longer and thus ate fewer calories (x). It is also thought that capsaicin decreases the production of the hunger hormone ghrelin, although this has yet to be confirmed (x).

According to a recent trial, using cayenne pepper cream as a topical agent helps treat moderate and severe psoriasis. Psoriasis is an autoimmune disease that presents itself as inflamed, scaly patches on the skin caused when skin cells replicate too rapidly. After six weeks, the 44 test subjects who applied the cream daily reported a significant decrease in psoriasis symptoms (x).

The high doses of beta carotene, antioxidants and the anti-inflammatory capabilities in cayenne pepper can prevent allergies by breaking up and eliminating mucus caused by congestion (x). With its high vitamin C content, cayenne pepper also works as a safeguard against the common cold.

Detoxification is used for cleansing the body of harmful toxins, and cayenne pepper aids in this process by stimulating the circulatory system and eliminating acidity. Many diabetics use cayenne pepper because it opens the capillaries and works to regulate blood sugar (x). Combine cayenne extract powder with lemon juice and honey to create a detoxifying beverage!

Studies show that cayenne pepper can fight many types of cancer, including prostate, melanoma and pancreatic cancer (x). Findings showed the capsaicin in cayenne slows the overproduction of cells that can lead to cancer (x). More research is necessary to test the effects of the capsaicin extract on humans.

Candida is a fungus that aids in digestion, but when it overproduces it can cause symptoms such as joint pain, hormone imbalances, a weakened immune system and digestive problems (x). Tests have also shown that cayenne can prevent the formation of these types of fungal pathogens (x).

Studies done on mice and pigs showed that the capsaicin in cayenne pepper could reduce high blood pressure (hypertension) by relaxing the blood vessels (x). However, research needs to be performed on human subjects first before cayenne is recommended by medical professionals for such purposes.

Besides adding a spicy kick to your recipes, cayenne pepper is also an excellent preservative for preventing food contamination (x).

Side Effects of Cayenne Pepper

Cayenne pepper is generally safe to eat and has very few side effects, however, consumption of high quantities can cause stomach upset and other gastrointestinal issues including heartburn (x, x).

Can Interfere with Certain Medications

Cayenne pepper may interfere with some medicines, so if you are taking any prescription medications, it is advisable to consult your doctor before taking cayenne supplements. Cayenne may interfere with blood-thinning medicines such as Warfarin, aspirin, naproxen or ibuprofen (x). For this reason, doctors usually recommend their patients stop taking cayenne pepper, in any form, at least two weeks before and two weeks after surgery.

Causes Blistering and Burning on the Skin

Cayenne pepper alone or as a powder directly placed on the skin can cause blistering and burns. Always use gloves while dealing with cayenne peppers when cooking or using cosmetic products like capsaicin cream. Dilute it with oil or combine with water and flour to make a paste before putting it on the skin. Avoid contact with your nose, mouth and eyes and always wash your hands after handling cayenne pepper or anything else containing capsaicin (x).

Children under the age of 2 shouldn’t be given the pepper in any form due to the reactions that may occur. Do not use topical products containing the pepper too frequently. Repetitive use may cause nerve damage in some individuals (x).

Cayenne pepper pills and cayenne pepper supplements may cause a burning sensation in the stomach, throat or rectum of some individuals who are sensitive to it. To prevent these reactions, add the
cayenne powder in small amounts to food.

Cayenne peppers are long, tapered and usually thin with rippled skin and a curved tip. Most cayenne peppers are red, but there are some varieties that are purple and yellow. Cayenne extract powder is used in a wide range of recipes like chili, seafood dishes and egg dishes. It’s also found in combined spices and condiments containing different types of peppers such as chili powder and hot sauce (x).

The recommended dosage for cayenne extract is 500 mg taken once to three times daily, or as directed by a physician. Each dose should be taken with 8 oz. of water and a meal to reduce the chance of heartburn.

Cayenne also comes in a capsule form. In this case, take one capsule once to three times per day. Again, be sure to take the capsule with at least 8 oz. of water.

Cayenne pepper has many benefits, including reducing the appetite and lowering blood pressure, among others, due to its most active component, capsaicin. The Federal Drug Administration (FDA) has approved capsaicin as an over-the-counter product, making it purchasable without a prescription.

If you are taking prescription medication, consult your doctor before adding cayenne pepper or cayenne supplements to your diet, as it can have adverse effects when combined with certain medicines.