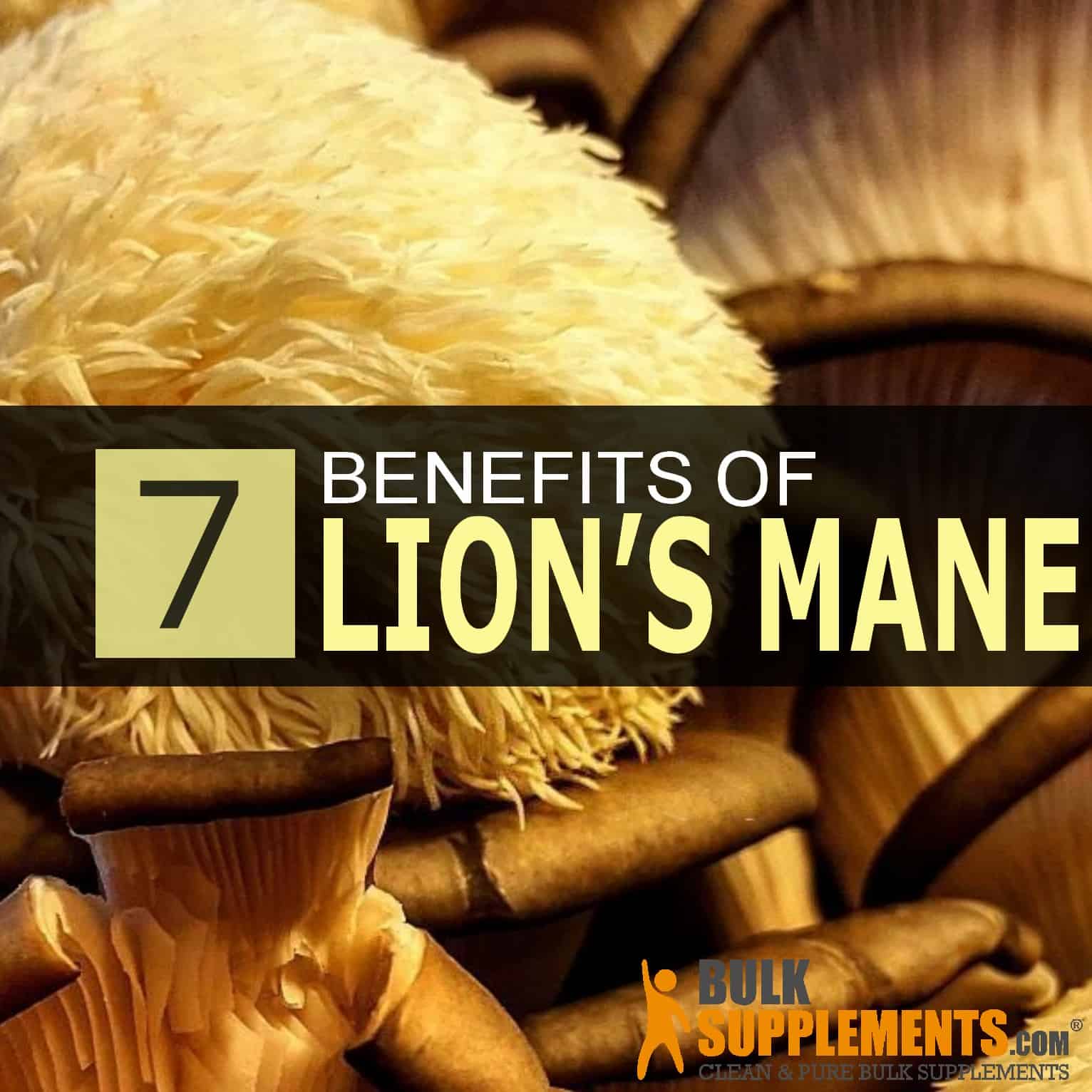 No one probably ever guessed that a mushroom could look like the mane of a lion.  Used for both medicine and food, lion’s mane mushrooms may look odd, but they can assist with several health concerns, such as inflammation, digestion, heart conditions, and might even help protect against cancer.

What is Lion’s Mane Mushroom Used For?

Lion’s mane mushroom, or Hericium Erinaceus, has been used in Asia for both medicine and food for centuries.  It is a white, spherical fungus comprised of long, shaggy strands, growing on both dead and living broadleaf trees (x).  Many health stores sell it as a supplement (x).

Although it has been consumed safely for centuries, a patient should talk to their doctor before using it as a supplement.

One lion’s mane mushroom benefit is its antioxidative properties, which can assist with inflammation and strengthening the immune system.  Every so often, natural chemical reactions in the body will give off extra oxygen, which produces extra biochemical stress.  Antioxidants help wipe away that extra oxygen, which can help prevent illnesses and diseases like cancer or diabetes.

A 2017 study separated a band of protein from it, which was recently indicated to perhaps improve the immune system by regulating the composition and metabolism of microorganisms in the gut.  Other animal studies have linked this protein band to antitumor inhibition in mice, which help suggest that it might be a potential food ingredient for immunotherapy (x).

A 2008 study examined the effects of the mushroom on cognitive impairment in humans.  An experimental group of Japanese women, between 50 and 80 years old, were given tablets that contained 96% lion’s mane mushroom powder.  The experimental group showed greatly increased scores on a cognitive function scale, and when the group stopped taking the tablets, those scores fell again.  These tests showed no adverse effects of consuming the mushroom, and that it may be effective in improving mild cognitive impairments (x).

A 2017 study looked at it’s effects on a healthy study group of mice, and the results showed an increase in recognition memory and overall cognitive health (x). For this same reason, much research has been conducted to test it’s effects on neurodegenerative diseases like Alzheimer’s and Parkinson’s diseases.  Oral administration of the mushroom in mice has improved cognitive activity tests (x).

Although much of the research surrounding heart health benefits in lion’s mane mushroom has been animal-based, the results are still promising.

A 2013 study tested it’s ability to lower cholesterol levels in obese rats.  Lion’s mane mushroom extracts were fed to seven test groups of rats, each on a high-fat diet.  Lowering the number of lipids in blood plasma is one way to treat hypertension (high blood pressure) and can even prevent the start of diabetes.  Therefore, it seemed to have done the trick for the rats, lowering their cholesterol and lipid levels (x).

Therefore, since the mushroom contains antioxidative properties, some research has been conducted into whether it might help lower blood sugar, which is the key to managing diabetes.

A 2013 study orally administered lion’s mane mushroom extract to a group of diabetes-induced rats for 28 days, with their body weight checked three times over that time.  Consuming it resulted in a huge decrease in serum glucose levels and an increase in serum insulin levels, concluding that the mushroom might help with managing diabetes (x).

A 2016 study from the Key Laboratory of Applied Mycological Resources and Utilization looked at different extracts of it for antibacterial activity, and it was found to inhibit several common bacteria found in the gut (x).

Some studies suggest that lion’s mane mushroom may help relieve symptoms associated with anxiety and depression.  Previous studies have indicated that bodily inflammation may play a role in depression and anxiety, and anti-inflammatory properties may help slow it down.

The Division of Clinical Neuroscience in China tested whether amycenone, a chemical extracted from it, can help alleviate depression or anxiety.  This chemical was administered to inflammation-induced mice, and the findings indicated that amycenone could potentially be used as a treatment for inflammation-related depression (x).

A study at Kyushu University looked at the effects of it on depression, menopause, and even sleep.  One half of a group of thirty women consumed the mushroom, and the other half consumed a placebo, in cookies for four weeks.  Concentrations levels were reportedly higher in the experimental group, while irritation and anxiety were reportedly lower in the placebo group (x).

Early research has shown potential for the mushroom to help prevent cancers.  Lion’s mane mushroom powder was found to have high protein, carbohydrate, and mineral content, which might help the mushroom’s ability to destroy leukemia cells (x).

As a medicine, the dosages have lasted up to sixteen weeks.  Consuming too much mushroom might produce an upset stomach, but nothing worse than that has been reported (x).

Some patients have reported slightly itchy skin, which might be thanks to an increase in nerve growth factor, though the exact mechanism remains unclear (x).

Not enough is known about the effects of lion’s mane mushroom on pregnant women or unborn fetuses, so pregnant patients should exercise caution and not use it.

It might also lower blood sugar.  If a patient has diabetes, consulting a doctor before consuming it in conjunction with other blood-sugar-lowering medications.

Although there are no reports of it slowing blood clotting in humans, patients with bleeding conditions or patients going into surgery should be careful about consuming it (x).

As usual, patients should follow all package directions and speak to their doctor if any side effects do occur.  If a package claims that the product will certainly provide specific health benefits, exercise caution, as much research so far has been animal-based.  A doctor can also determine whether it’s safe to take it in conjunction with other medicines.

How to Take Lion’s Mane Mushroom

If a patient wishes to consume a raw mushroom, some sources suggest cooking the outside until it is crispy, since the raw taste can be bitter (x).

Where to Buy Lion’s Mane Mushroom

Are you interested in testing lion’s mane mushroom supplements for its versatility in heart, immune, digestive, and cognitive health?  Contact BulkSupplements.com to place an order today.