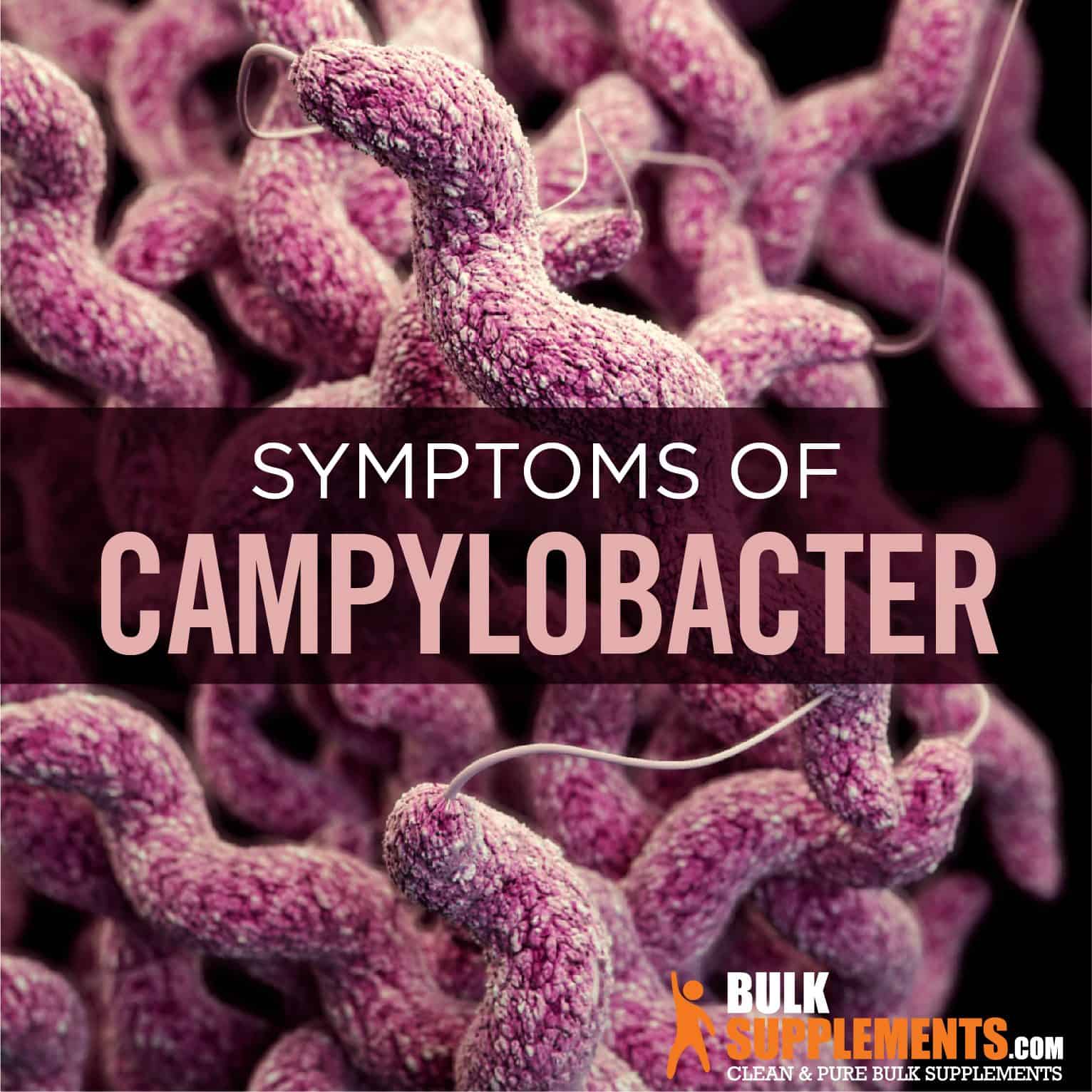 Campylobacter simply refers to “curved bacteria” in layman’s terms. It is a genus of gram-negative bacteria that typically appears as s-shaped or comma-shaped (x). Campylobacter infection, which is also known as campylobacteriosis, occurs in the digestive tract and is caused by, of course, campylobacter bacteria.

Campylobacter jejuni remains one of the major causes of food poisoning in the United States and Europe. Most cases occur in isolation and are not even recognized as outbreaks (x). Research shows that 14 out of 100,000 people suffer from food poisoning caused by campylobacter (x).

While infection from campylobacter can be uncomfortable, it is rarely serious. Fluids, electrolytes and rest usually are sufficient for someone to fully recover. Sometimes, however, people with compromised immune systems or who are very young may require more intervention. Natural remedies can also help kill campylobacter and ease symptoms of infection.

Campylobacter symptoms usually begin to appear 1 to 7 days after the bacteria has been ingested, but most commonly surface between 2 and 5 days. The symptoms themselves typically last for 3 to 6 days. However, not all campylobacter infections result in illness or development of symptoms. The absence of symptoms can indicate an immunity to the amount of bacteria that infected the small intestine. In other words, some people can ingest small amounts of campylobacter and not get sick.

Symptoms of campylobacteriosis include (x, x):

Stomach cramps in relation to campylobacter infection can be very intense and sometimes be mistaken for pain from appendicitis. Cramping occurs when the muscles of the stomach become hard, tight and painful. Muscle spasms, which are involuntary contractions of one or two muscles, give you cramps. The stomach cramps usually start 2 to 5 days after infection and may persist for up to a week. They can also be mistaken for menstrual pains if it falls around that time, especially during the early stages of build-up to the cramps.

Bloating is simply the accumulation of gas in the stomach and intestine. Many factors can cause bloating such as indigestion, drinking carbonated beverages or eating a very large serving of food. The bloating caused by campylobacter is not much different from the other aforementioned causes. There is one major difference, however — bloating caused by campylobacter can last up to a week, which is rare with any other cause.

A main feature of campylobacter infection is the occurrence of loose and watery bowel movements which may occur intermittently and are usually accompanied by a sense of urgency. However, diarrhea can also develop as a result of other causes. Some of these causes include food intolerance, diet, anxiety or the use of laxatives. Diarrhea caused by campylobacter usually has traces of blood and can last a couple of days or might worsen and last for several weeks. The amount of blood in the stool rarely becomes critical. Diarrhea can be accompanied by nausea and vomiting.

Just as in most of the other symptoms of campylobacter infection, fever can also be a symptom of a number of other illnesses. Basically, fever is a sign that the body is fighting an infection. Therefore, a fever in itself may not be a bad thing. What it is fighting, though, is where the problem usually lies. It simply stimulates natural defense mechanisms to fight against the foreign particles or bacteria which are present in the body. Usually, it is essential to definitively determine that a person is suffering from campylobacter infection before starting any treatments.

Bacteria in the blood, hepatitis, pancreatitis, cardiovascular complications and painful joints can develop as a result of a campylobacter infection. Campylobacteriosis may also lead to the onset Guillain-barré syndrome — a condition that causes temporary paralysis of the muscles; however, this is very rare (x, x).

Campylobacteriosis occurs when a species of campylobacter, usually C. jejuni, enters the body and colonizes in the digestive tract. Small amounts of the bacteria may not cause symptoms. In fact, it’s believed that people probably develop some immunity to the bacteria, which partially explains why children, with their still-developing immune systems, are more likely to become infected (x).

The elderly, those who are malnourished and those who have a weakened immune system for any other reason are more susceptible to infection. Examples of conditions associated with more frequent and complicated campylobacter infections include HIV, thalassemia or cancer (x).

Here are the most common ways that campylobacter spreads:

Animals used for food and livestock such as pigs, sheep, cattle and poultry all carry this species of bacteria. Shellfish can also contain campylobacter. The major mode of transmission of campylobacter is via food and infection usually occurs in people who eat food that didn’t reach a high enough cooking temperature to kill pathogens. It spreads mainly through animal products, especially under cooked chicken. Research has found it to be present on both the internal and external body of poultry and that the meat becomes contaminated through contact with feces during slaughtering (x).

Unpasteurized, or “raw” milk is milk that hasn’t been heated to a high temperature to kill the germs and pathogens it may contain. Usually, pasteurization destroys the harmful bacteria found within raw milk. In addition to campylobacter, raw milk may contain disease-causing organisms such as salmonella, listeria, E. coli and cryptosporidium (x).

Most cases of campylobacter infection resolve on their own and don’t require medication. Hydration and electrolyte replenishment, sometimes administered intravenously, are usually enough. In cases involving people with compromised immune systems or complications that arise, antibiotics like ciprofloxacin are used (x).

Natural remedies can also help reduce the duration and ease some of the uncomfortable symptoms. These include:

Some plant extracts such as those derived from cranberries can prevent pathogen colonization by prohibiting them from “sticking” to the gastrointestinal tract. Researchers consider cranberry extract to be an anti-adherence agent that helps protect against strains of campylobacter such as C. jejuni and C. coli (x). The recommended dosage is 400 milligrams one to three times daily, or as directed by a physician. For best results, be sure to drink plenty of water during supplementation.

Containing a lot of strong, effective anti-inflammatory compounds that make nausea subside and quell gastric distress, ginger is an effective remedy for queasiness, nausea and vomiting (x). Ginger can be taken in many ways including as a tea, dried, juiced or as a supplement like ginger root extract powder. As a supplement, take 1,000 milligrams once daily, or as directed by a physician. To avoid any heartburn, take with at least 8 ounces of water.

Cinnamon contains a compound called cinnamaldehyde which studies show can kill pathogens like fungi and bacteria. It may even be effective against antibiotic-resistant strains of C. jujuni (x, x). To use cinnamon bark extract as a supplement, take 650 mg to 1350 mg up to three times daily with meals and water.

Prevention is the Best Cure

Campylobacter that sickens humans usually originates in the food production chain which many of us can’t control. However, there are steps we can take to minimize the chance of infection. These include (x, x):

Campylobacter infections are extremely common worldwide, especially in young children who haven’t yet built up immunity to the bacteria. It can cause unpleasant stomach cramps, bloating and diarrhea, and on rare occasions cause more serious complications. This bacteria most commonly spreads through contaminated food and water so proper handling and cooking of food goes a long way to prevent infection. Infections generally don’t require medical intervention but if they do, intravenous fluids as well as antibiotics can be administered. In addition, plant extracts derived from cranberries, cinnamon and ginger can help prevent illness and ease symptoms.