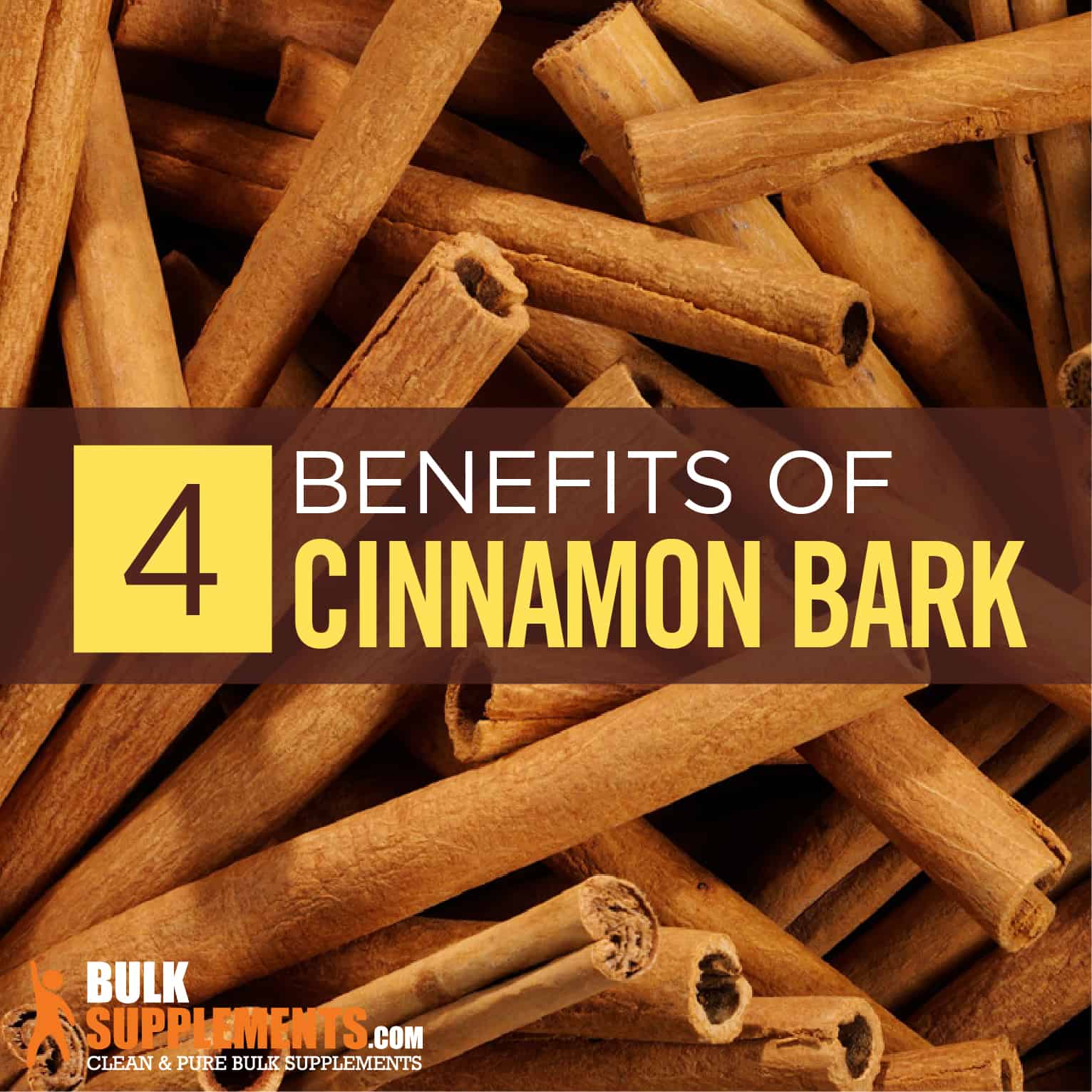 What is Cinnamon Bark Extract?

We are all likely familiar with the cinnamon spice. It is a very common flavor and frequent condiment used to garnish oatmeal, breakfast cereals, desserts, ciders and various pastries. The ground form of cinnamon we most commonly find in supermarkets actually comes from the inner bark of various trees.

However, ground cinnamon is not the only variety that is useful and beneficial. Trees of the Cinnamomum genus not only give us the ability to turn their inner bark into ground cinnamon, but we can also use their flowers, bark (when dried into sticks) and cinnamon bark extract as a supplement.

After harvesting cinnamon, we primarily utilize the bark and the leaves of the tree. The trees take a number of years to grow before we are able to extract the cinnamon bark for consumption. Once the bark is harvested, it must be processed immediately while it is still wet. With the outer bark scraped off of the cinnamon tree, you are then able to use a hammer to hit and separate the outer and inner bark from one another. If done correctly, the inner bark should come off in long strips. The outer bark is then discarded and the inner bark is set to dry and curl into quills. Eventually, the inner bark will be properly dried within its ideal conditions before being cut into two or four-inch sections and distributed for sale (x, x).

The demand for cinnamon is quite large. It is common in a number of different cultural cuisines due to its numerous health benefits. Still, though, there are some who do not enjoy the flavor of cinnamon, or just don’t consider it a vital part of their diet. With all of the benefits that cinnamon bark has to offer, however, it should most certainly be considered a necessary part of our diet.

Looking to add cinnamon to your diet for all of the benefits the bark has to offer? Then a supplement might be the easiest option. Of course, be sure to consult your physician before making major changes to your diet and implementing supplements of any kind to your daily routine. Although cinnamon has been proven to help with a number of health-related issues, it is important to understand proper dosage.

Whether you are taking cinnamon bark extract as a supplement or if you are consuming it as a powder or tea, then you are likely to receive a number of amazing and natural benefits. Cinnamon bark is capable of treating conditions such as gastrointestinal upset, diarrhea, infections caused by parasites and worms, influenza, the common cold and high blood sugar. It can even soothe menstrual cramps and increase or stimulate the appetite while reducing flatulence. Combined in a multi-ingredient cream, it can prevent premature ejaculation as well. The array of benefits cinnamon bark extract has to offer is astounding. (x, x).

Cinnamon bark contains an ingredient known as tannins, which are an organic substance common in many different tree barks. Tannins are particularly useful medicinally for their astringent properties when treating wounds, as well as having the ability to aid in the prevention of diarrhea. These tannins tend to draw blood and tissues back together, which is why it aids in treatment of wounds. Moreover, it can also be a beneficial anti-inflammatory agent (x).

There are studies to suggest that using cinnamon bark extract as a supplement can help lower blood sugar levels as well as increase the body’s sensitivity to insulin. This can be an influential phenomenon for those that suffer from type 2 diabetes or metabolic syndrome (x, x). By reducing insulin resistance in the body, insulin is able to properly transport blood sugar. In turn, higher insulin sensitivity can lower those blood sugar levels.

Cinnamon has the ability to lower the amount of glucose that enters your bloodstream after you eat. It does this by inhibiting certain digestive enzymes, which then gives the body more time to break down carbohydrates. Since cinnamon slows the absorption of carbohydrates, it causes you to feel full for longer after eating (x, x). Beyond all of that, cinnamon contains a compound known as hydroxychalcone that has the ability to mimic insulin. Though it acts slower than insulin, hydroxychalcone can still increase the glucose uptake of your body’s cells (x, x, x).

Some American studies suggest that cinnamon strictly suppresses appetite due to the mimicking of insulin. However, there are a variety of studies supporting the ideology that cinnamon is primarily an appetite stimulant for other reasons. German studies suggest that hydroxychalcone does not suppress appetite, but stimulates it. There is no conclusive evidence to suggest one or the other in regards to appetite and cinnamon. It may impact people differently due to varying hormone and/or insulin levels (x).

Of the many compounds that comprise cinnamon, cinnamaldehyde is the main component which gives cinnamon its flavor and odor. Of course, it does much more than that. It is capable of fighting against various fungal infections while inhibiting the growth of certain bacteria. The evidence of cinnamon fighting infections is somewhat limited, but definitive in regards to respiratory tract infections caused by fungi and bacterial infections such as listeria and salmonella. The antifungal and antibacterial properties found in cinnamaldehyde also allow for antimicrobial benefits in regards to tooth decay and bad breath (x, x, x, x).

Cinnamon contains a high level of polyphenol antioxidants — possibly even more than any other commonly used spice (x). Due to this factor, cinnamon has strong anti-inflammatory properties, which can be helpful if you struggle with chronic tissue inflammation. Having a diet of healthy antioxidants is an important way to maintain a healthy lifestyle (x, x, x).

If you’re looking to improve your heart health, cinnamon bark may be able to help. According to a study on patients with type 2 diabetes, a daily supplement of cinnamon bark managed to help raise their HDL cholesterol (the good kind) and reduce LDL levels (the bad kind) (x). It may also help lower blood pressure (x).

Despite the various benefits cinnamon bark has to offer, all consumers may react a little differently. The dosage can depend on a number of factors, including how one consumes the bark. It is commonly used as an extract, as a supplement or as a powdered condiment added to teas or meals. It is best to discuss all major dietary changes and implementations of supplements with a trusted medical professional beforehand. Many of the side effects experienced by consumers using cinnamon bark extract as a supplement were due to interactions with current medications, preexisting medical conditions, or consuming an improper dosage amount.

The most common side effects people have experienced in regards to cinnamon bark include skin irritation when applied as an oil or irritation of mucous membranes in the stomach, intestines and urinary tract. After consuming it in excessively large amounts, people have reportedly experienced diarrhea, vomiting, dizziness and drowsiness (x).

Cinnamon bark extract supplementation is likely unsafe during pregnancy or when breastfeeding. This is due to the concentration and possible effects the amount could have on the infant. However, most medical professionals consider it safe to consume cinnamon in the amounts regularly found in foods and teas during pregnancy and breast feeding. This is because it is generally a lower concentration. That said, if you are uncertain, it is best to avoid it altogether (x).

Although all supplement usage is recommended to be discussed with your physician before implementation, special care should be taken by those that have diabetes (especially type 2) and take diabetes-related medications. Since it has the ability to lower blood sugar levels in people with type 2 diabetes, it is important to be hyper aware of personal blood sugar levels in order to avoid hypoglycemia. Since many diabetes-related medications may also lower and/or regulate blood sugar levels, if taken alongside cinnamon bark extract, it could lower blood sugar to dangerous levels, and the dosages will likely need to be altered to accommodate.

Cinnamon bark is a basic part of many people’s diets and has been a reliable medicinal option for centuries. The ability that cinnamon bark extract has to reduce inflammation, impact appetite, assist in the treatment of diabetes and fighting infection is quite the feat for a food that can be found naturally in the bark of certain trees. Still, there are a number of important considerations when implementing cinnamon bark extract as a supplement in your diet. It is vital to not only consult a trusted health care professional, but to also understand proper dosage suggestions.