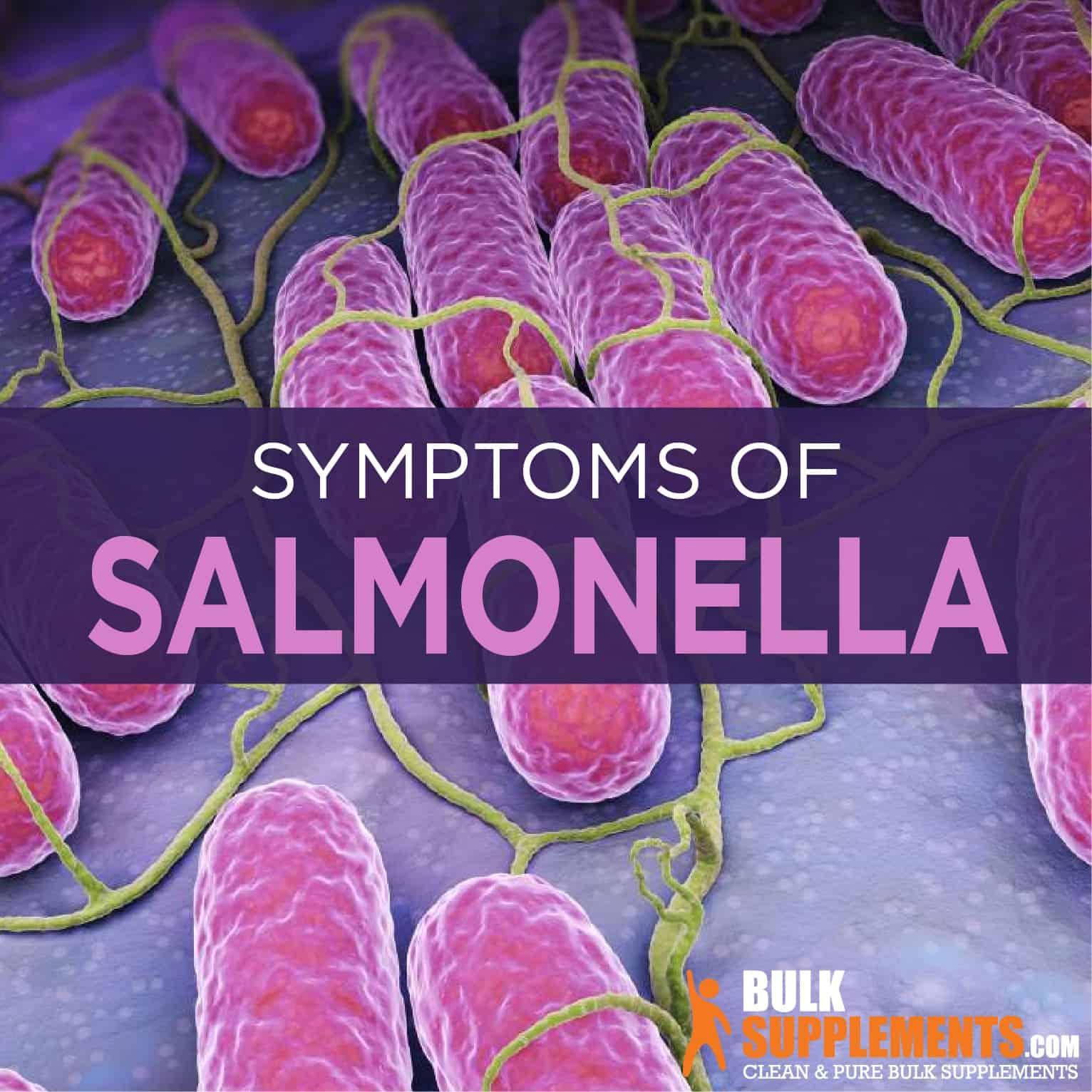 Salmonella naturally occurs in small amounts in the digestive tract of humans and certain animals. It spreads when people accidentally ingest the bacteria through contaminated food, water or from hand to mouth.

Each year, tens of millions of people worldwide get salmonellosis with 1.2 million of those infections occurring in the United States (x). Most cases resolve on their own without medicine. Sometimes, though, complications can develop that require medical intervention. Some people are also at greater risk of becoming infected and of having life-threatening complications as a result (x).

Proper food hygiene, frequent hand washing and avoiding under cooked food and contaminated water helps prevent infection. Hydration and rest usually suffice as a person recovers from salmonella poisoning. Medication and hospitalization may be necessary for some, though.

These start anywhere from 6-72 hours after ingesting salmonella, but usually between 12 and 36 hours. Once symptoms begin, they could last 4-7 days. It may also take a few months for bowel habits to become normal again (x, x).

Most cases resolve on their own. Complications can arise, however, especially in young children, older adults and people with weak immune systems.

Dehydration from vomiting and diarrhea is the most common complication of salmonellosis. However, it can be among the most dangerous. Signs include a dry mouth and tongue, frequent need but small amounts of urine, dark or strongly smelling urine and dry or sunken eyes (x, x).

Some people who get the infection feel pain in the joints, a condition known as reactive arthritis (x). This can last for a few months after treatment. Reactive arthritis is usually accompanied by pain when urinating and a sore, itchy or stinging feeling in the eyes.

Salmonella Spreading Beyond the Gut

In about 8 percent of cases, salmonellosis spreads to other areas of the body including blood, joints, bones, nervous system, brain and other organs. This can lead to serious infections that have long-term effects. Generally, though, these infections can be managed through medical intervention (x).

Salmonella bacteria causes salmonellosis. These bacteria live in the intestines of humans and animals and therefore spread through feces. There are many ways the bacteria can spread.

When food or water becomes contaminated with salmonella, people can become sick. Contamination can happen in a few ways. First, raw meat, poultry, eggs and seafood can harbor salmonella. This is the most common way that salmonella makes people sick. Eating any of these foods in their raw or under cooked state puts people at risk of infection.

In addition, produce grown with untreated water or that is exposed to animals that may spread the bacteria can also make people sick. Fruits and vegetables that come into contact with raw meat or are handled by people with salmonella on their hands can also become contaminated.

Even when food is cooked thoroughly, improper kitchen hygiene can spread salmonella. For example, placing cooked food back on the same unwashed plate where raw food was stored can contaminate the cooked food.

People who travel to countries with a history of poor sanitation have a higher risk of contracting salmonellosis. However, outbreaks can happen anywhere. In addition, most cases occur in the summer months when warm weather promotes the growth of bacteria (x, x).

Failing to properly wash hands after using the toilet, changing a diaper, cleaning up after a pet, or handling raw meat can leave salmonella on a person’s hands, which then can spread to other surfaces and food.

Many animals carry salmonella in their feces and on their bodies, but animal-to-human transmission often occurs through reptile and amphibian contact. Pets such as snakes, lizards and turtles pose a particularly big risk because the bacteria lives on their skin and shells.

Children under the age of 5 are at the greatest risk of becoming seriously or fatally ill from contact with reptiles and amphibians. It is advisable to avoid keeping these types of pets indoors if you live with children, the elderly or people with compromised immune systems (x).

To prevent the spread of salmonella, the Centers for Disease Control and Prevention recommend the following (x):

Diagnosing salmonella involves taking blood or stool samples for analysis in a laboratory. The main aim of the tests is to rule out other diseases that may be causing symptoms such as diarrhea, fever and stomach cramps. Additional tests may be necessary depending on the type of salmonella identified in the clinical samples (x).

Most cases of salmonellosis resolve without medical intervention. Occasionally, someone with severe dehydration may need intravenous fluid and electrolyte replacement. Doctors try to avoid prescribing antibiotics because it can lead to a greater risk of recurring infections and antibiotic resistance. However, in cases of weak immune systems or if the infection spreads beyond the gut, antibiotics may be prescribed (x).

Some natural remedies also have natural antimicrobial properties that can support the body’s healing and ease digestive symptoms.

Ginger comes from the same botanical family as cardamom and turmeric. It contains gingerol, a bioactive compound with antioxidant and anti-inflammatory effects. Studies show that ginger is successful in reducing nausea and similar stomach troubles like indigestion. There is also evidence that it can help with muscle pain and spasms (x). Fresh or dried ginger can be used as a comforting, hydrating tea. Ginger also comes as a dietary supplement. Take 1,000 milligrams of ginger root extract powder once daily, or as directed by a physician. To avoid any heartburn, take with at least 8 ounces of water.

Peppermint acts as a natural antibacterial. One study showed that peppermint reduces pathogens in food that can make people sick, including salmonella (x). It can also help reduce bloating, gas and nausea. It also has antispasmodic properties, which means that peppermint can reduce the intensity and frequency of uncontrolled muscle movements (x). Like ginger, peppermint makes a soothing tea or can be taken as a supplement. As a dietary supplement, take 700 mg of peppermint extract powder once or twice daily, or as directed by a physician. Best taken with meals. Pregnant women should check with their doctors before using peppermint.

Salmonellosis is caused by a bacterial infection of the intestines. Infection in humans is mainly caused by eating or drinking contaminated foods and water. Common symptoms of salmonellosis include diarrhea, abdominal pain, fever, nausea, chills and vomiting. Fortunately, treatment is rarely necessary for otherwise healthy people who contract salmonellosis. The best way to prevent any food-borne illness including salmonella poisoning is by practicing proper hygiene. For those with compromised immune systems or who develop complications, treatment is available in the form of antibiotics. Natural remedies such as ginger and peppermint can help too. Be sure to check with your doctor before using any supplements.