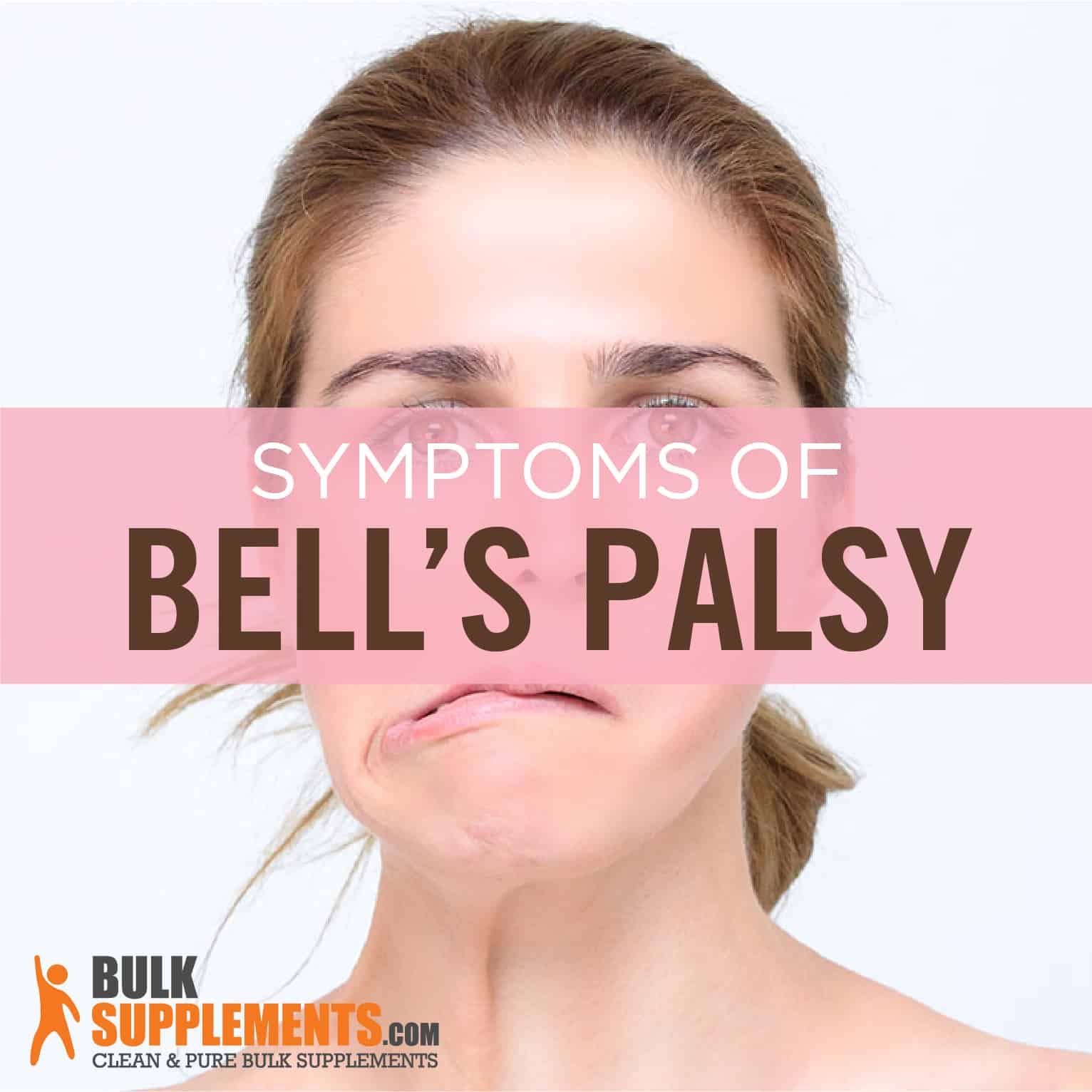 What Is Bell’s Palsy?

Bell’s palsy, also called idiopathic facial paralysis, is a condition that causes sudden but temporary weakness in facial muscles. It is believed to occur when the cranial nerve that controls muscles on the face becomes inflamed, swollen or damaged (x). It can also happen as a reaction to a viral disease. As far as research is concerned, however, the exact cause of Bell’s palsy as well as its cure remain unknown.

The condition is temporary, and even though it gets worse in the next three to five days after starting, it usually subsides within a few weeks. People affected usually make a full recovery within six months. It causes one side of the face to become stiff and even painful. It may droop and the patient may experience some discomfort. Smiling becomes hard and one-sided, and the eye on the affected side may be hard to close which makes blinking difficult.

Bell’s palsy can occur at any age, but it is more prevalent among those between 16 to 60 years old. It is also more likely to affect pregnant women and those with other conditions such as diabetes and influenza. Only a few people have it for a lifetime, which is very rare.

It is named after Charles Bell, a human anatomist from Scotland who was the first scientist to fully describe the condition (x).

Bell’s palsy’s symptoms occur suddenly and are easy to notice, especially in the morning after waking up. They include (x, x):

In rare conditions, Bell’s palsy can affect both sides of the face. In any case, it is best that you do not self-diagnose these symptoms. Instead, alert a doctor as soon as possible and have them diagnose it personally. These symptoms could signify a more serious underlying condition such as a stroke or even a growing brain tumor.

The seventh cranial nerve controls the muscles of the face and some in the ear. Their movements including smiling and blinking. This nerve passes through bone tissue. When it swells, gets compressed, damaged or inflamed, transmission of nerve impulses to and from the face is interfered with, which causes the facial muscles to weaken (x). The extent of the swelling or inflammation will determine how severe the symptoms are. The exact cause of the swelling and damage is still unknown, although scientists think it has a connection with some disease-causing virus such as:

Usually, Bell’s palsy goes away on its own after a few days without the aid of any medicines or supplements. When it persists, however, it becomes necessary to take some remedies to ease the muscle weakness and stimulate the cranial nerve to transmit nerve impulses. Some supplements and remedies that could help include:

This is useful in boosting the nervous system while also improving the health of the eyes. Vitamin B12 also encourages the growth of the nerves. It works for people with Bell’s palsy by helping the inflamed, swollen or damaged cranial nerve heal and transmit impulses to and from the face. When taken in the correct amounts, vitamin B12 helps to ease the stiffness and improve muscle coordination, effectively speeding up the recovery. In a study conducted in 1995, Bell’s palsy patients were administered with vitamin B12 supplements for muscle weakness and recovered in just two weeks compared to the 10 weeks other patients on mere steroids took (x). They can be found from supplements and food sources such as animal kidneys and liver, clams, sardines, beef and fortified liver. You could couple these with omega-3 fatty acid supplements for dry eyes in extreme cases.

The recommended vitamin B12 supplement dosage will depend on some factors such as other medications you will be taking as well as the severity of your symptoms. Consult with your doctor for an accurate prescription.

Zinc can also boost the nervous system. It helps to ease the transmission of nerve impulses while also boosting the response of the immune system. Moreover, zinc is good for healing of inflamed, swollen or damaged nerves, making it a good relief for people with Bell’s palsy. Zinc can also treat viral diseases such as those that have been linked with Bell’s palsy (x). Taking zinc supplements for pain and muscle stiffness has proved to lower the intensity of the condition’s symptoms significantly, especially with the facial droop and poor coordination of muscles. Sources include supplements and food sources such as meat, legumes, dairy, seeds and nuts. The dosage of the supplement will depend on several personal factors and you should, therefore, consult with your doctor for accurate dosage.

Echinacea is an herb that has been used for centuries to treat viral diseases including those that scientists think are connected with Bell’s palsy (x). Additionally, it boosts the functioning of the immune and nervous system by reducing inflammation. It is therefore useful in both prevention and relief of Bell’s palsy. Echinacea can be used as an herb or a liquid supplement.

Elderberry has been used for centuries to treat flu, colds, respiratory infections and sinus diseases. Most of these are viral and have been linked to Bell’s palsy (x). There are many available elderberry products including tea, ointments, lozenges, pills and syrups. Elderberry supplements are also available, but should be taken with precaution especially by those taking other strong medications and undergoing various treatments such as chemotherapy.

Castor oil is used to reduce the growth of disease-causing viruses, bacteria and other micro-organisms. It also boosts the lymphatic system with its disease-fighting properties. For relieving Bell’s palsy, castor oil is used in a compress to improve blood flow in the affected area. The procedure is as follows:

This should be done at least twice a day until the symptoms begin to subside.

One of the most significant symptoms of Bell’s palsy is the difficulty in closing the eye on the affected side. This means that blinking is difficult and that the eye will soon be dry and itchy. To protect it from further damage, you should wear protective eyewear during the day, especially when in dusty places. Consider using an eyepatch at night and using rehydrating eye drops when it gets too dry.

The goal of acupuncture is to stimulate the muscles and nerves in the body. When done on the affected areas, this procedure may offer relief from some symptoms of Bell’s palsy such as poor muscle coordination and stiffness.

These exercises are meant to specifically target the facial muscles. They should improve the functioning of the nerves between the brain and your face. Doing them consistently will help reduce the symptoms of Bell’s palsy. They could include:

Biofeedback is the use of information instruments to gain visual or auditory feedback that helps to gain control over some physiological functions, especially the involuntary ones. It aims at the ability to manipulate such at will in order to solve problems that come with some conditions such as migraines and high blood pressure.

Biofeedback for Bell’s palsy treatment is still under research, though some evidence that mentions it as a possible treatment for the condition exists; the electromyographic feedback helps improve motor function of the muscles on the face (x).

As mentioned before, no one should self-diagnose Bell’s palsy. If you wake up experiencing any of the symptoms mentioned above, be sure to reach out to a doctor for confirmation. They could be signifying more serious underlying conditions such as a stroke.

In most cases, the symptoms of Bell’s palsy resolve within a few weeks. If they do not go away within at most six months, reach out to your doctor for another diagnosis and a new treatment plan. Such persistence could cause total paralysis of the face and result in irreversible damage in the long term.

Bell’s palsy is a condition that occurs suddenly and usually temporarily in people of all ages and both sexes. It is not life threatening unless it develops into more severe complications. It goes away in a few weeks and does not usually persist for more than six months. Bell’s palsy symptoms include stiffness and muscle weakness on one side of the face. It becomes difficult to close the eyelids as well as to convey other facial expressions such as smiling and winking. These symptoms can be alleviated by the use of supplements and remedies such as vitamin B12, zinc and echinacea. You should never make your own diagnosis, but rather seek the advice of a doctor or physician to distinguish Bell’s palsy vs. stroke symptoms or other similar conditions that could be more life-threatening.