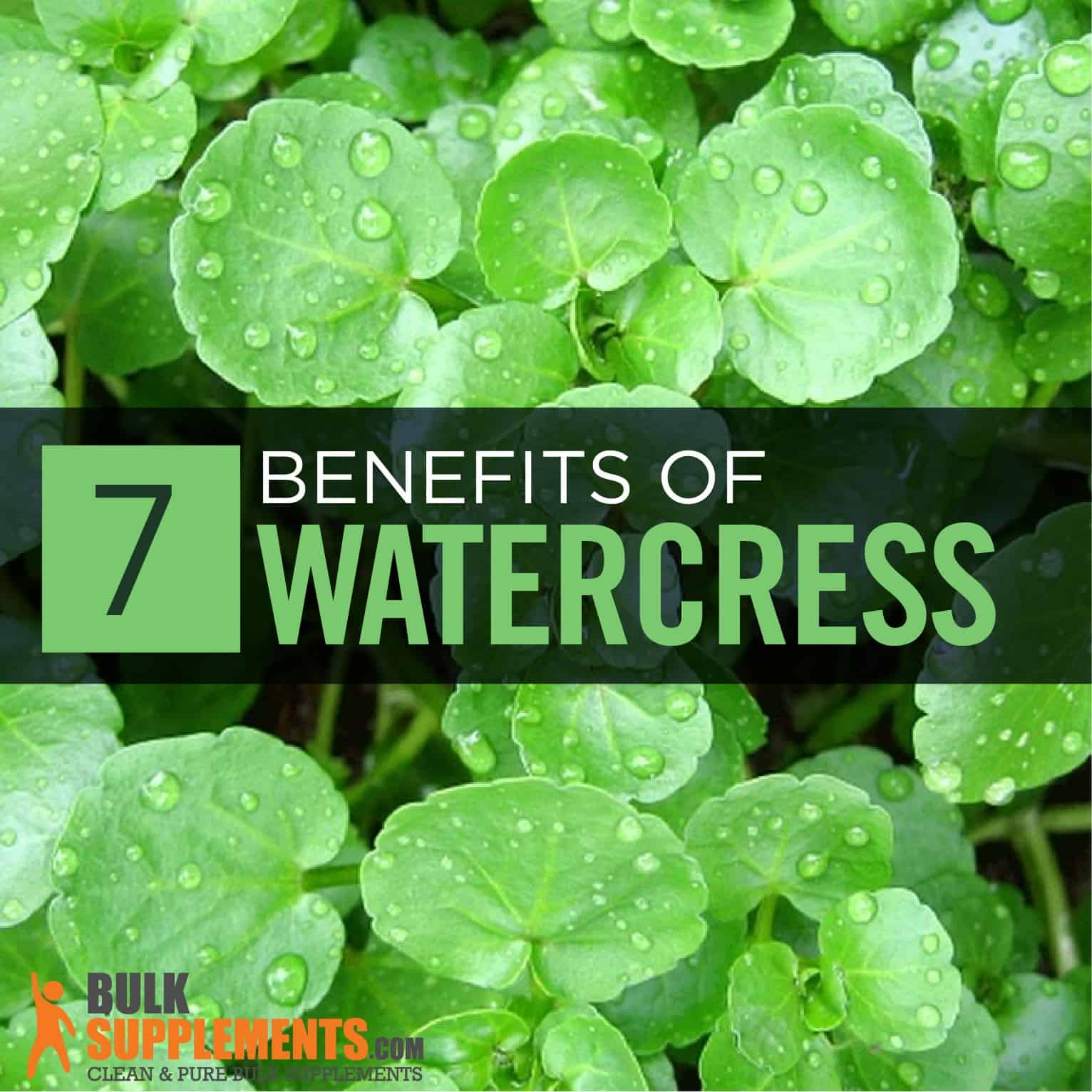 Everyone’s talking about superfoods these days. From kale to chia seeds to wheatgrass, foods that we may have never even thought to add to our diets are now popping up everywhere. Even plants that were considered weeds, like dandelion, are getting a public relations makeover. Now watercress gets to enjoy its time in the limelight as an excellent, nutrient-packed, easy-to-cultivate superfood.

We can all agree that watercress makes for a lovely garnish, but it would be tragic to limit this plant’s use to something so trivial. This cruciferous vegetable is becoming the hottest superfood due to its rich content of minerals, vitamins and phytonutrients. It’s a low-calorie and nutrient-dense plant that’ll not only keep you slim, but can also improve your overall health.

What is Watercress Extract?

Watercress, known officially as Nasturtium officinale, belongs to the brassicaceae family of plants. Kale, cabbages, cauliflower, broccoli and arugula also belong to this group and are botanical cousins of watercress. This mineral-rich, dark green leafy vegetable grows in the wild along streams and natural springs and is now purposely cultivated for food and supplements. It has a little peppery taste plus an exciting balance of soft leaves and crunchy edible stalks.

In its fresh form, watercress makes a delicious add-on to salads, sandwiches and a lightly sautéed side dish. People can also consume extracts of watercress as a dietary supplement in powdered, liquid or encapsulated forms.

Since the days of Hippocrates, people have been using watercress medicinally. In fact, Hippocrates himself apparently chose the location for a hospital near a stream to make sure his patients had access to watercress (x).

Why is this little leaf so important? It happens to be extremely rich in nutrients including (x):

The Centers for Disease Control and Prevention designated watercress as a “powerhouse” vegetable which it defines as “foods most strongly associated with reduced chronic disease risk” (x).

A quick word about antioxidants — antioxidants are compounds that prevent other compounds, called free radicals, from causing damage to cells. Free radicals have important functions in the body but an imbalance between free radicals and antioxidants can lead to what’s called “oxidative stress”. Many chronic diseases like cancer, heart disease and diabetes arise from prolonged oxidative stress. As a result, a diet high in antioxidant-rich foods like watercress reduces the risk for many of these illnesses, according to research (x).

According to the Centers for Disease Control and Prevention, cardiovascular diseases (CVDs) are the number one cause of death worldwide. Factors that contribute to the development of CVDs include high cholesterol, high blood pressure, diabetes, oxidative stress and inflammation. Some of these can be managed through lifestyle choices like diet (x).

Watercress extract can help. Thanks to its antioxidant content, watercress can help reduce oxidative stress and inflammation that contributes to events like heart attacks. For example, a study showed that people with higher levels of zeaxanthin and lutein (found in watercress) in blood had less hardening of arteries than those with decreased amounts of these antioxidants (x).

Watercress may also play a role in blood sugar management. In one 2015 study, two treatments — insulin and watercress extract — were compared to see how they worked to control blood glucose levels in rats with type 2 diabetes. The findings showed that watercress extract contains hypolipidemic and hypoglycemic effects and therefore lowered blood glucose and cholesterol (x).

Finally, the naturally-occurring nitrates in watercress can help lower blood pressure. This is because nitrates help to relax blood vessels and promote the flow of blood, thereby reducing blood pressure (x).

While studies haven’t conclusively proven that taking vitamin C reduces everyone’s risk of getting the cold, it may help certain people, like those exposed to extreme conditions, to stay healthy. Vitamin C may also shorten the duration of the common cold (x).

Studies show that dietary nitrates like the kind found in watercress can help exercise performance. In the body, dietary nitrate can eventually convert to nitric oxide during times of strenuous exercise when oxygen becomes less available. Nitric oxide dilates blood vessels and affects metabolism so that oxygen and nutrients get where they need to go during strenuous exercise, thereby improving endurance (x).

Ingestion of nitrates seems to benefit beginners who engage in low-intensity exercise and well-trained athletes who perform strenuously on a regular basis (x).

When we think of healthy bones and diet, calcium often comes to mind. While calcium is definitely important to maintain strong bones, other nutrients are required, including vitamin K. As luck would have it, watercress is a great source of both of these.

A hormone responsible for the mineralization of bone, called osteocalcin, requires vitamin K for activation. A deficiency in the vitamin can lead to a higher risk of osteoporosis and bone fractures (x, x).

Watercress contains tons of phytochemicals, including one notable group called isothiocynates. Research shows that these compounds can help prevent some types of cancer.

Isothiocyanates include chemicals like phenethyl isothiocyanate (PEITC) and sulforaphane, which prevent cancer by protecting against cell damage, inactivating carcinogenic compounds and stopping tumors from growing and spreading (x, x).

What’s more, research indicates that the sulforaphane and isothiocyanates contained in watercress help suppress the formation of cells that cause breast cancer (x, x).

Watercress contains zeaxanthin and lutein, which are antioxidants that belong to the carotenoid family. Several studies have proven that zeaxanthin and lutein are vital for eye health. To be specific, they protect the eyes against blue light damage. They can also reduce a person’s risk of developing age-related cataracts and macular degeneration (x).

Moreover, the vitamin C content in watercress can help slow down the formation of cataracts (x).

Good for the Skin and Hair

Like all foods rich in antioxidants and vitamin C, watercress is great for the appearance of skin and hair. The antioxidants fight free radicals, which can lead to signs of aging like wrinkles and spots. The vitamin C in watercress promotes collagen production which improves skin elasticity (x, x).

Watercress Extract Dosage and Side Effects

When supplementing with watercress extract powder, take 900 mg (about 1/3 tsp) daily, or as directed by a physician. Be sure to speak to a doctor before adding this supplement to your regimen.

Side effects can include nausea and upset stomach. Watercress extract supplements should not be used by children or by pregnant or breastfeeding women. If you’re taking medications including Chlorzoxane, Lithium or Coumadin, speak to your doctor before taking watercress extract.

Consult with your healthcare provider before embarking on a nitrate-rich diet if you have heart disease or related risk factors. A diet high on nitrates may interact with some medications like nitroglycerine (organic nitrate) or nitrite drugs taken for angina, such as vardenafil, tadalafil and sildenafil.

There’s a heap of healthy nutrition contained in this aquatic plant. It’s a great source of minerals and vitamins including vitamin K, which helps build and strengthen bone, vitamin A, which promotes eye health, and vitamin C, which supports the immune system.

Watercress and its extracts also contain antioxidants like flavonoids (lutein, zeaxanthin, carotene), which promote good vision, help protect against cell damage due to free radicals and benefit the cardiovascular system. In fact, watercress was found to have the highest amount of antioxidants among a group of 12 different cruciferous vegetables (x).

Watercress has got a mild taste (but it tastes a little like pepper to some people) and pairs favorably with almost any sandwich or salad ingredient. Well-known watercress salads also include avocado, apple and other green veggies like spinach, mache or arugula.

Watercress can also be added to soups, wraps, spring rolls, stir-fries or topped on deviled eggs.

Consuming all sorts of fruits and vegetables is linked to a decreased risk of health issues. Many studies indicate that increasing your intake of plant foods reduces the risk of heart disease, diabetes, obesity and overall mortality while promoting increased energy, overall lower weight and a healthy complexion.

Watercress is an especially powerful plant that, when consumed fresh or as an extract, can help strengthen immunity, boost energy during exercise, keep your bones strong and possibly even fight cancer.