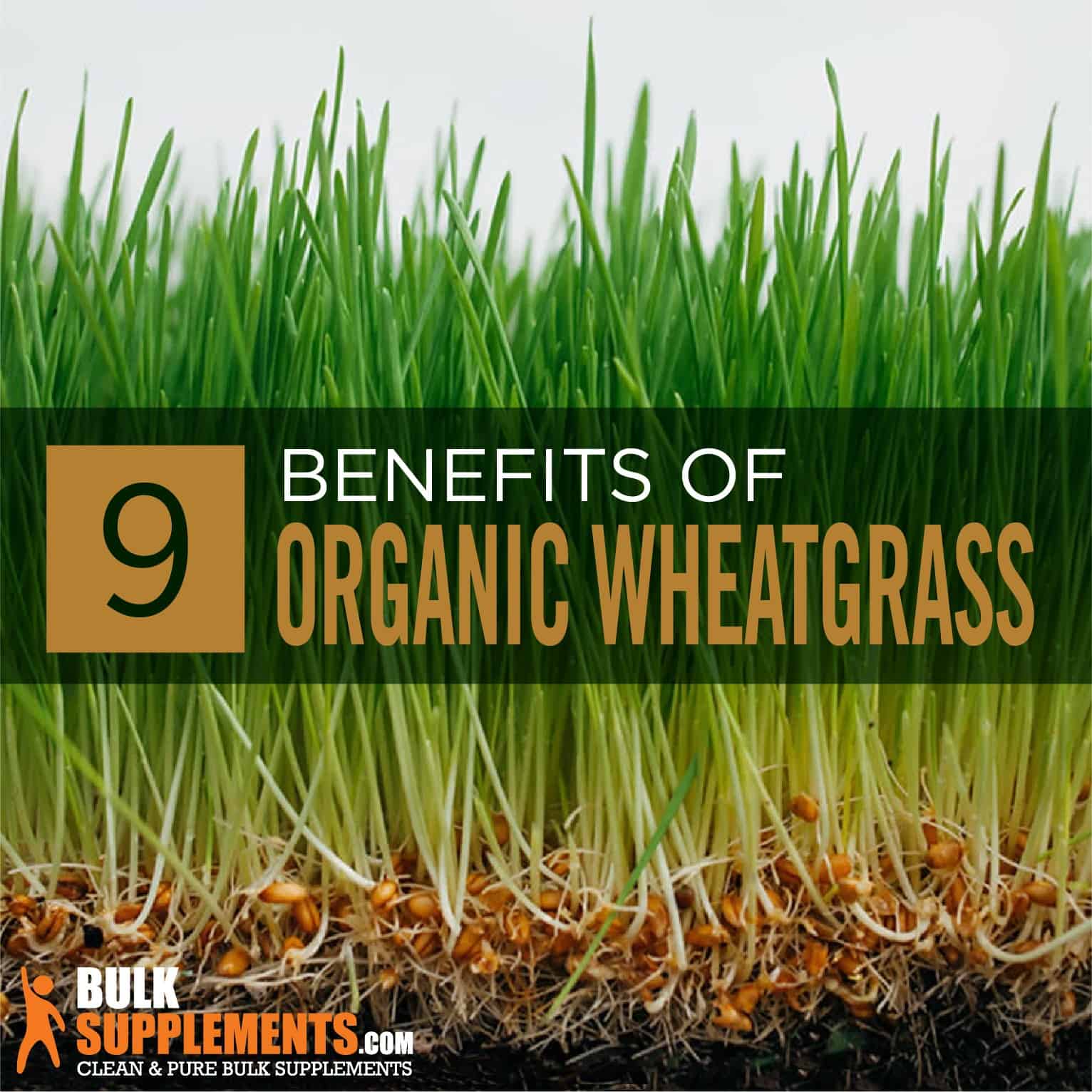 What is Organic Wheatgrass?

Wheatgrass first became a household name in the United States in the 1930s and has since developed and gained a reputable position in the medical industry. (x) (x) The excellent reputation of this ingredient has entered the limelight in the world of natural health. Juice bars, health and natural food stores, and even some grocery stores offer wheatgrass to their customers. You may have had your first shot of wheatgrass at a local juice or smoothie business.

Ancient civilizations like Mesopotamian and Egypt considered the young blades of wheat a prized possession for their positive effects on their vitality and overall health. In 1930, an agricultural scientist, Charles F. Schnabel, fed wheatgrass to his chicken with great success and a bounty of eggs. He developed supplements for his family and friends.

Large corporations invested millions of dollars researching the positive effects of wheatgrass. As a result, in 1940, Schnabel’s wheatgrass supplement was on grocery store shelves throughout North America.

The discoveries of wheatgrass continue with Ann Wigmore, who healed herself of cancer by taking weeds she gathered from vacant lots in Boston. With her success, she studied with Dr. Earl Thomas and discovered 4700 varieties of grass worldwide — all good for humankind. Researching with the help of her pets, she concluded that wheatgrass is the best for medicinal purposes.

Wheatgrass is a nutrient-rich plant sourced from the freshly sprouted leaves of the common wheat plant known as Triticum estivum. It comes in a variety of forms. One of which is a multipurpose fine powder for both human and animal consumption. Most people prefer its juice form compared to taking it in other forms. Wheatgrass powder is a good option when the plant is unavailable or you don’t have time to run down to the local juice bar for a shot.

It also has the name ‘green blood’ because of its chlorophyll content and benefits. (x) Anecdotal reports show it can serve as a treatment for cancer and chemotherapy side effects, diabetes, joint pain and anemia. It may also contain nutrients that boost your immunity, rid your body of wastes and kill harmful bacteria in your digestive system. By adding it to a smoothie, you can access nutrients like magnesium, iron, calcium, amino acids and vitamins A, C and E, as well as antioxidants.

Though wheatgrass is generally considered safe, it can have some side effects like constipation, nausea and anorexia.

The nutritional value of wheatgrass seems endless. The young grass contains many vitamins and minerals to help maintain your health and help you with a health concern. These health benefits include:

Wheatgrass is an excellent source of vitamins and minerals. It contains 17 amino acids, and eight of them are essential. Those eight essential amino acids are only present in food sources since the body cannot produce them. (x)

One study showed that it could reduce oxidative damage to cells because of its antioxidant activity. (x) Another study showed that it could increase the levels of antioxidants glutathione and vitamin C. (x) The antioxidants can also help with spiritual, mental and overall well-being, such as issues with depression. When your body is healthy, you are mentally happier. However, more research needs to be done on its antioxidant effects on humans as most of these studies are animal and test-tube studies.

Inflammation is a normal response triggered by the immune system to protect your body against infections and injuries. Wheatgrass contains antioxidants that help fight chronic inflammation, contributing to health conditions like heart disease and cancer. (x) Inflammation can occur when the immune system reacts to a number of health problems like skin issues, arthritis and stomach problems. Its chlorophyll pigment has powerful anti-inflammatory properties. One study showed that chlorophyll prevented the activity of a specific protein that triggers inflammation. (x) Chlorophyll lowers inflammation in some cells found in the arteries. (x)

Wheatgrass helps stimulate your thyroid gland, which is the gland responsible for metabolic levels in the body. Stimulations of the thyroid gland can boost metabolism, which increases energy levels in your body. The chlorophyll in wheatgrass has thylakoids, which help to increase satiety. It lowers hunger in your body and reduces food intake. It also aids in weight loss efforts by suppressing appetite. (x) (x) Some research even shows that wheatgrass can help fight obesity. (x)

Increased blood sugar levels can cause severe complications like vision problems, nerve damage and skin infections. Some of its symptoms are fatigue, headaches and thirst. According to some studies, wheatgrass can help maintain healthy blood sugar levels and benefit people with diabetes. A study conducted in 2014 found that it could increase your insulin levels, which helps lower blood glucose. (x) It can also help lower the side effects associated with diabetes.

Wheatgrass is an ideal natural supplement option if you want to improve your skin health. Its antioxidants help slow down the aging process and detoxify the body, giving the skin a glowing look. Wheatgrass has antibacterial benefits and the ability to lower chronic inflammation, making it an excellent tool to reduce occasional breakouts and acne. One study showed that it effectively worked when used consistently and even helped reduce scars and blemishes when taken over seven months. (x)

While there may be some benefit of wheatgrass if you have diabetes or potentially may have diabetes, only limited studies can confirm these health benefits. Wheatgrass may help manage diabetes because of its role in improving lipid and glucose levels.
A study published in the December 2009 issue of the Journal of Herbal Medicine and Toxicology showed that adding wheatgrass to certain foods significantly boosted blood glucose levels. It also has effects similar to those of insulin. (x) However, you must discuss with your medical professional any use of wheatgrass to help treat diabetes.

Where to Buy Wheatgrass Powder?

You can purchase wheatgrass powder at BulkSupplements.com. The company is an industry-leading manufacturer and distributor of pure dietary supplements.

Are you interested in trying wheatgrass powder mentioned in this article as a possible solution to helping you with inflammation, acne or blood sugar levels? Contact BulkSupplements.com to place an order today.

Some people start with taking one ounce daily and then move up to two ounces after a week or so. A standard dose for wheatgrass is not yet precise. The dosage depends on the age and health status of the person in question. Individuals need to keep in mind that natural products are not necessarily safe, and the dosage is essential. People should follow relevant directions on supplement labels and consult medical professionals before consumption.

The suggested serving for organic wheatgrass powder is 400 mg (just over 1 tbs) daily or as directed by a physician.

Though some experience side effects after taking wheatgrass, and because the juice or powder is so potent, it’s best to take it slowly and gradually build up to two ounces a day or even less. Some side effects include:

Some people may experience nausea soon after consuming wheatgrass — often the first several times they take it. Some people attribute this to detoxification, but it could also signify your body’s intolerance to wheatgrass. Just keep in mind, a little shot of wheatgrass goes a long way.

A study carried out by the Technion-Israel Institute of Technology showed that wheatgrass raised the symptoms of nausea in six of the patients undergoing chemotherapy. (x) Wheatgrass may contain gluten even though they are young grasses. Therefore, if you have celiac disease, you might want to check with your physician about taking wheatgrass. (x)

Some individuals might experience constipation after consuming wheatgrass supplements because the body might not be able to digest them properly. Constipation could also be because of its high fiber content. So, it would help if you consumed it slowly and in small amounts.

Though this could be good news for individuals trying to control their weight, it could prove unhealthy in the long run. So, it is something to consider but not severe.

Headaches might be because of your body’s incompatibility with wheatgrass or detoxification. An organism that causes adverse side effects called Listeria monocytogenes could contaminate the wheatgrass. Severe headaches are one of the side effects of this organism. (x)

Most supplements have warnings, as does wheatgrass. Those include:

With the possible contamination of listeria monocytogenes, pregnant and breastfeeding women should avoid wheatgrass. (x)

According to the American Cancer Society, people with wheat intolerance or allergy should consult a medical professional before consuming wheatgrass in order to be safe. Signs of an allergic reaction from wheatgrass include swollen throats and breaking out in hives. (x)

Because of the effect of wheatgrass on blood sugar levels, individuals with health conditions like diabetes should first seek advice from their doctors before consuming it.

Since wheatgrass mainly grows in moist conditions, it can develop mold if not properly taken care of, and the final product (powder, pills, tablets) might include mold.

For centuries, cultures have taken wheatgrass for their overall health and vitality. Today, a substantial number of research and medical journals support the consumption of wheatgrass as a juice or as a powder.

It provides numerous health benefits, like the ability to lower disease-causing free radicals, fight cancer and lower cholesterol. Wheatgrass can also help with weight management. For optimum results, it is good to include wheatgrass in a balanced and healthy diet.