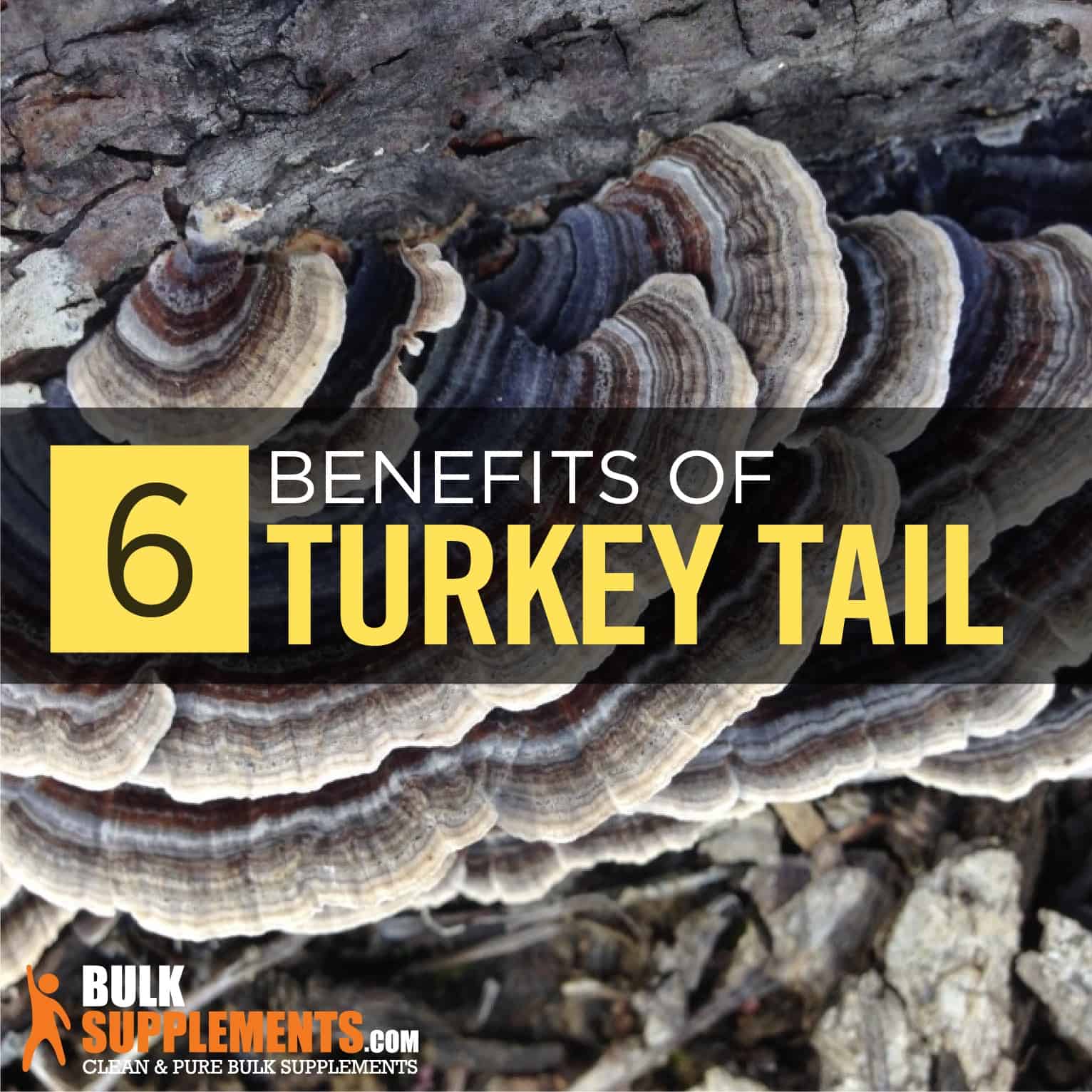 What is Coriolus Versicolor (Turkey Tail)?

Coriolus versicolor, also known as turkey tail, is a species of medicinal mushroom. Originally used in Chinese medicine, this mushroom is well known for its extraordinary health promoting qualities. Word has spread and now turkey tail is the focus of some very promising research.

The mushroom gets its nickname from its colorful, tail-like appearance. It also goes by many other names including trametes versicolor, Yun Zhi, Kawaratake, Krestin, PSK and PSP.

No matter what you want to call it, turkey tail has pretty incredible health benefits. It can help prevent and treat cancer, is an excellent antioxidant, promotes digestive health and is antiviral. It also contributes to overall health by boosting the immune system. As a result, it’s even used as an adaptogen.

It also boasts a high content of many different antioxidants (x, x).

Can Help Treat and Prevent Cancer

Turkey tail extracts, specifically the polysaccaropeptides, are getting a lot of attention for their potential to help prevent and treat cancer.

Test tube and animal studies show that it can stimulate the immune system. In these studies, it was able to reduce cancer cells of the liver, skin, breast and connective tissue (x).

Researchers aren’t yet sure exactly how turkey tail works to fight cancer cells. It appears, however, that it can influence the activity of specific immune cells including tumor necrosis factor (TNF), NK cells, interleukins and histamine (x, x).

Reduces Side Effects of Cancer Therapies

Turkey tail can help reduce the side effects of chemotherapy and radiation thanks to its ability to modulate the immune system. In other words, it stimulates the helpful immune cells while suppressing the unhelpful ones. In studies, patients with esophageal, lung, stomach, ovarian and cervical cancer reported less pain and had better immunity when undergoing conventional cancer treatment (x).

These mushroom extracts might also improve survival rates and quality of life in cancer patients. This is possibly due in part to patients being able to tolerate further chemotherapy (x, x).

Turkey tail can help the liver better perform its detoxification duties. It’s been found that compounds in the mushroom have a beneficial effect on the liver. This helps reduce the toxic load and keep the body healthier overall. Researchers are also studying the benefits of the mushroom for serious liver diseases like hepatitis B (x, x, x, x).

The immune stimulating abilities of turkey tail and similar medicinal mushrooms helps keep viral infections in check. As a result, they’re being studied and used with success in people infected with viral infections such as the herpes simplex virus, HIV and oral HPV (x, x).

An adaptogen is a substance that helps the body react to internal or external stressors. Medicinal mushrooms, including turkey tail, are considered among the best adaptogens thanks to their antioxidant content and ability to regulate the immune system (x).

Turkey tail can promote digestive health in a few different ways. First, dietary fiber in the form of polysaccharides makes up about 50 percent of the mushroom. Research shows the fiber in the mushroom promotes the growth of healthy bacteria in the gut (x).

There is something else unique about the fiber from the mushroom. It can prevent toxic compounds from being absorbed into the digestive tract which helps to prevent cancer of the colon and rectum (x).

Turkey Tail Dosage and Side Effects

These mushrooms can be dried and used as teas or in powder form. Extracts of the mushroom are available in various forms, including powder form.

When supplementing with turkey tail mushroom powder, take 1,000 mg once daily. Be sure to speak with a doctor before adding this supplement to your regimen.

Side effects can include dark colored stools and darkening of fingernails (x).

People have traditionally turned to turkey tail for general health, detoxification and in response to illness. Studies using modern research methods continue to churn out results that confirm this mushroom’s magic.